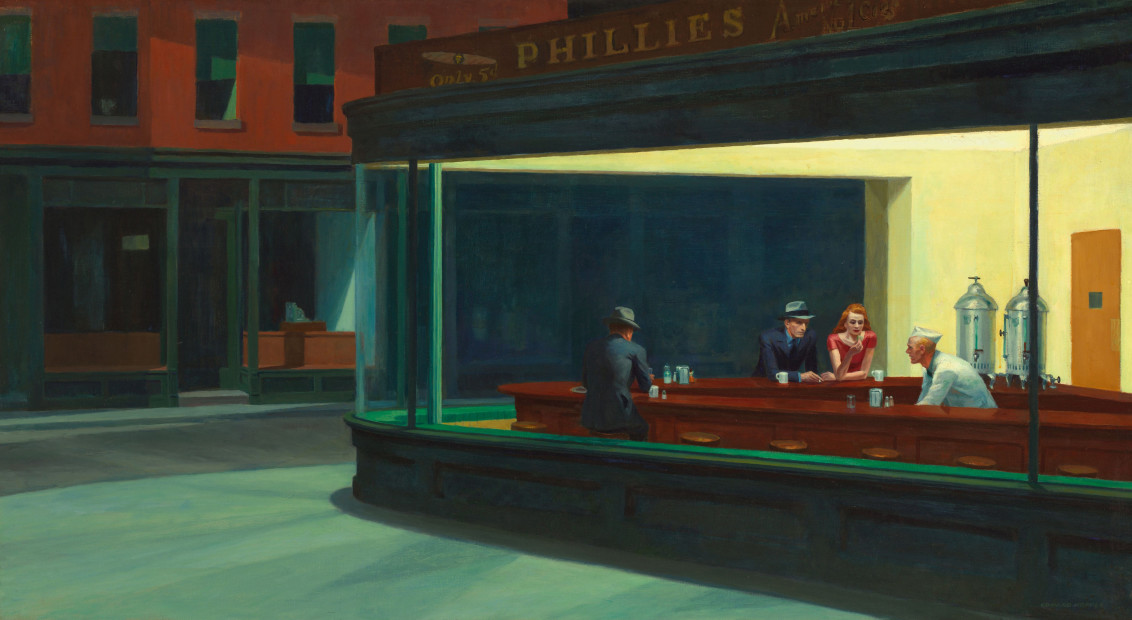 Edward Hopper: the painter who inspired Hitchcock and Lynch with his portrayal of urban isolation

Few artists immortalise the zeitgeist like American painter Edward Hopper. In etchings and watercolours, but most notably in his oil paintings, Hopper presents cinematic renderings of a nation in the midst of seismic transition. Though he tended to focus on the built environment, particularly when it offered a stark contrast between quaint nostalgia and shimmering modernity, Hopper’s ability to capture mood among people is what connects his work so strongly to the optimism and alienation of Pre and Post War America.

Born in the rural setting of Nyack, upstate New York in 1882, Hopper began his artistic journey as an illustrator, precociously gifted and painfully introverted. In his later teens he enrolled at the New York School of Art where he transitioned to watercolours and oils under the tutelage of William Merrit Chase and Robert Henri. Both were leading Impressionist painters of the day who instilled realism and a focus on the unsentimental in Hopper’s work.

Several trips to Paris followed, opening Hopper’s eyes to the great French Impressionists and, upon returning, what he came to regard as the “crude” and “depressive” quality of life in a rapidly developing New York. These formative years are particularly important here, given that Hopper always maintained his paintings reflected a very personal, and sometimes imagined, experience of the world. 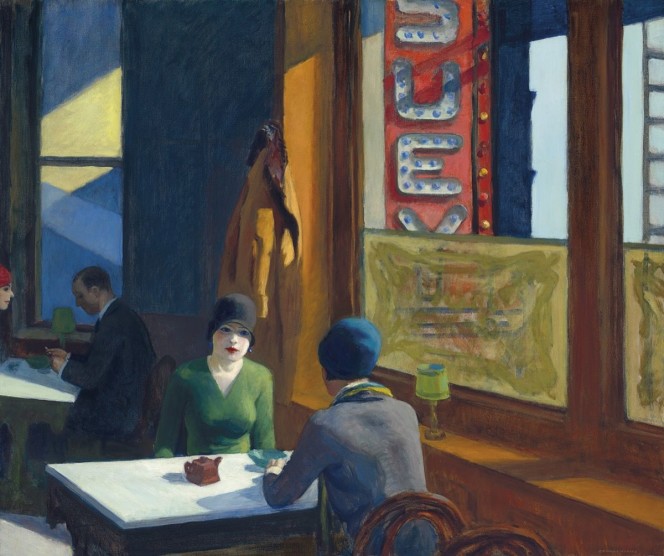 In this context, the sad and solitary figures that occupy many of his best known works, including Nighthawk, Intermission, Chop Suey and Elevan AM, take on a deeper psychological weight. Caught in the early onset of modernity, with its promises of prosperity and progress, the adrift characters in Hopper’s paintings embody paradoxical feelings of loneliness and unease. Almost always pictured in threshold spaces, neither domestic nor public, Hopper’s choice of setting only adds to the sense of alienation.

On the one hand these paintings are set-like representations of archetypal American vernacular: gas stations, diners, motels and movie theatres, but arguably their greatest potency derives from the way in which Hopper takes these quotidian settings and transplants his own mental state within them. Seen in this way, Hopper’s signature brand of noir emanates from the anthropomorphic qualities of his paintings: the lonely midnight diners, the stoic lighthouse, the waking storefronts and shy street corners. 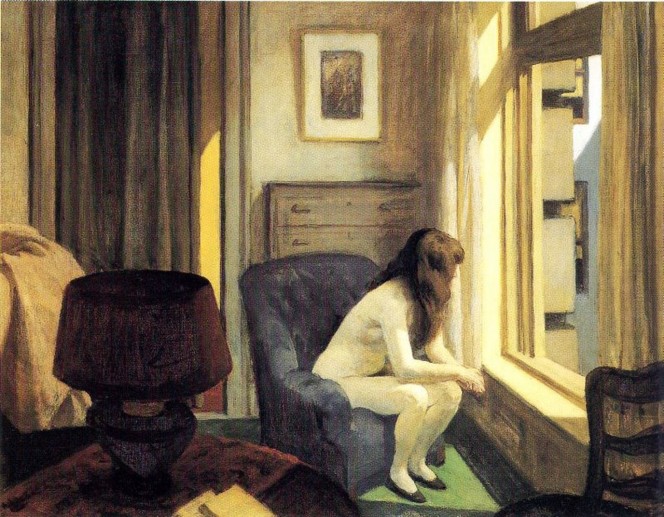 Key to the emotive power of these paintings is Hopper’s use of light, which was greatly influenced by the tension and drama of Rembrandt and Degas. Hopper’s paintings frequently utilise equally dramatic compositions of light and dark, adding to their strong sense of narrative and explaining the widespread adoption of his visual language within cinema, particularly by Hitchcock, Antonini and Lynch.

For Hitchcock in particular, Hopper’s gaze was like a petri dish from which an infinite number of possible narratives could grow. Evidence of Hopper’s influence can be found throughout Hitchcock’s oeuvre, but especially his 1954 classic Rear Window. Just as the power of Hopper’s paintings lies in what he chooses to exclude, so the tension and spectacle in Hitchcock’s Rear Window relies on what is obscured or unseen. Compare for example, the parallels between Hopper’s 1928 painting Night Window and the film’s character of Miss Lonelyhearts. Both frame solitary, partially nude woman within the privacy of their own bedrooms. Both carry a sense of intrusion, and perhaps more importantly, a prevailing sense of isolation in spite of their dense urban surroundings. 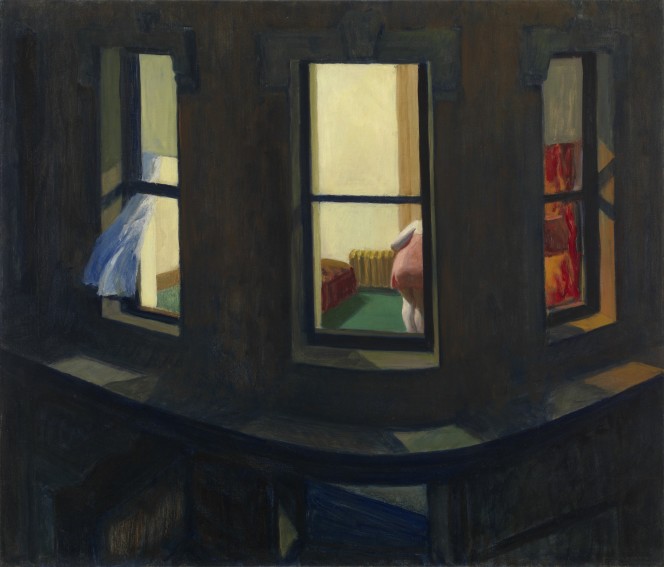 If there is a single work to sum up Hopper’s evocative use of light, his cinematic sense of narrative and unflinching portrayal of urban isolation, it might well be Automat. In the painting we see a solitary woman sitting at a table, staring into her cup of coffee with an air of quiet despair. Under sterile lights (reflected as hanging orbs in the pitch-black window behind her) and surrounded by impersonal furniture, she appears lost and adrift in unwelcoming surroundings. From the single glove she wears, to her clothing, make-up, body language and facial expression, Hopper creates a richness sense of character that has invited endless speculation and interpretation.

The choice of an Automat is clearly no coincidence. This ‘automatic restaurant’ became widespread in New York from around 1912, and like a walk in vending machine made any need for human contact redundant, ‘serving’ thousands of customers a day with industrial efficiency. This would doubtless have contributed to Hopper’s view of a social fabric under threat, slowly eroded by the atomising effects of modernity.  Like Édouard Manet’s The Plum or Edgar Degas’s L’Absinthe, the painting continues to serve as a powerful symbol of depression and the lonely crowd paradox of modern cities. 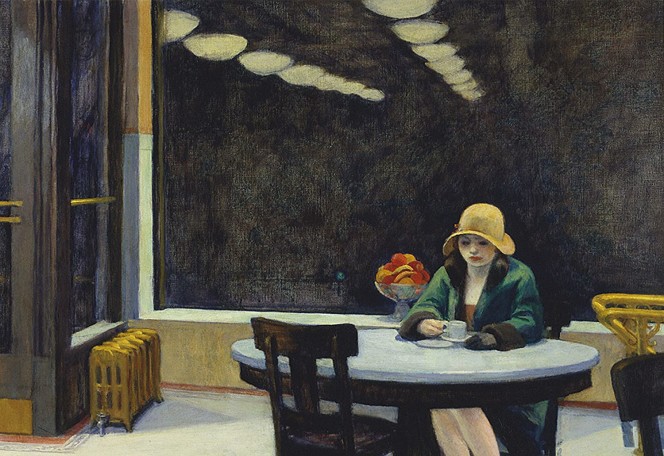