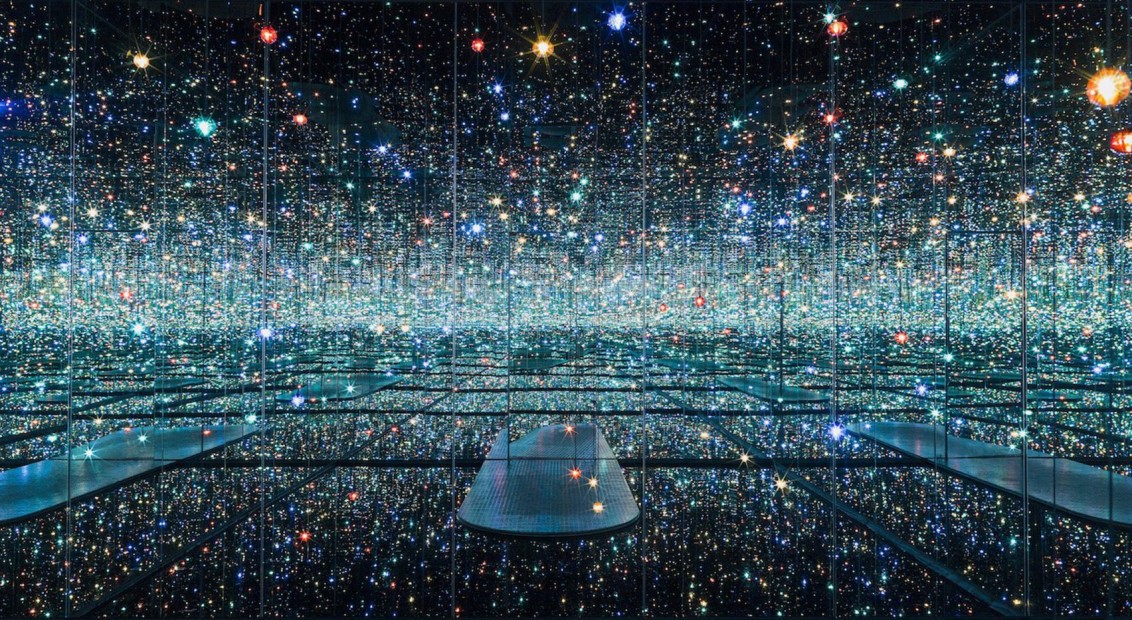 Kusama was hardly what you might describe as a normal kid. Her interest in creativity started early, in spite of her parent’s disapproval, and extended to poetry as well as art. At around the age of 10, she began experiencing vivid hallucinations which she’d later describe as, “flashes of light, auras, or dense fields of dots”. Plants would speak to her, inanimate objects like textiles would anthropomorphise before her eyes, immersing Kusama in her own private world of colour and pattern. Unsurprisingly, these episodes fuelled her art, which in turn provided an escape from her abusive family life and her father’s many infidelities.

Kusama was just 13 when Japan attacked Pearl Harbour, triggering America’s entry into World War II. Her adolescent years, which Kusama described as, “closed in darkness”, were consequently shaped by the experience of war, not only because she was sent to work in a parachute factory, but due to the air raid sirens and constant fear of bombing raids she was forced to live with.

Soon after enrolling at the Kyoto Municipal School of Arts and Crafts where she studied the traditional Japanese art form of Nihonga, Kusama became disillusioned with what she perceived as the institute’s stifling teaching methods. She dreamed of something bigger, with fewer rules and greater scope for experimentation. After dropping out of her studies, Kusama began exhibiting paintings in Tokyo during the early 50s, many of them covered in the explosion of polka dots that have since become her signature.

The hallucinations continued to influence her work, providing a portal into another world that Kusama relayed in her paintings. One of her early works, Flower (1954), was born out of a particularly psychedelic episode which Kusma later recalled in detail.

“One day I was looking at the red flower patterns of the tablecloth on a table, and when I looked up I saw the same pattern covering the ceiling, the windows, and the walls, and finally all over the room, my body and the universe. I felt as if I had begun to self-obliterate, to revolve in the infinity of endless time and the absoluteness of space, and be reduced to nothingness. As I realised it was actually happening and not just in my imagination, I was frightened. I knew I had to run away lest I should be deprived of my life by the spell of the red flowers. I ran desperately up the stairs. The steps below me began to fall apart and I fell down the stairs spraining my ankle.” 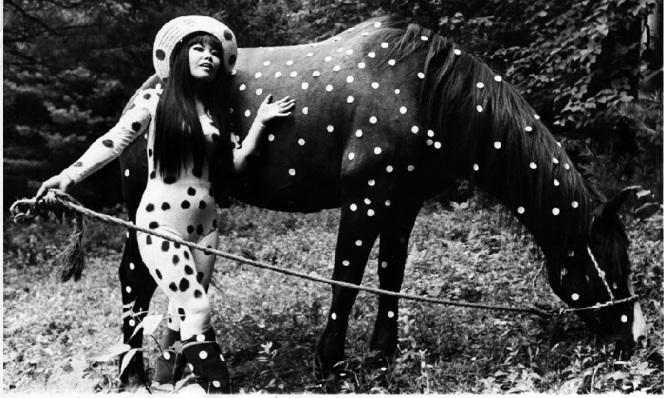 Moving to New York proved pivotal to Kusama’s development, not only as a major centre of the contemporary art market but the home of many artists Kusama had idolised in Japan. After a year in Seattle, she finally settled in New York in 1958 on the recommendation of Georgia O’Keefe and soon became part of the thriving artistic community thanks to early friendships with the likes of Donald Judd, Joseph Cornell and Eva Hesse.

Kusama continued her practice of covering everyday items in polka dots, something she had begun in Japan but stepped up in scale and productivity in New York. Inspired by the likes of Pollock and Rothko however, she also embarked on a new series of meditative paintings that became known as her Infinity Nets series. These hypnotic, highly detailed works brought an almost trance-like state to the viewer, a precursor of what was to follow. 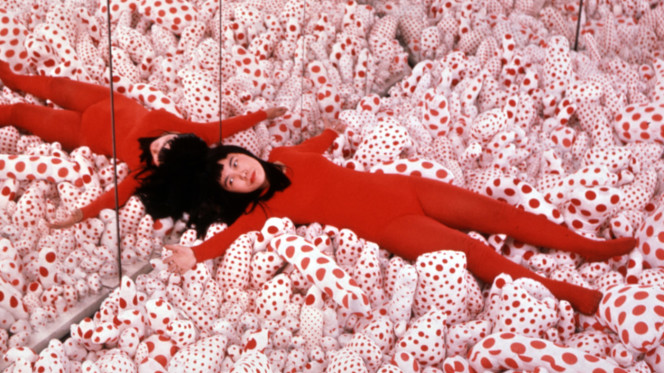 Yayoi Kusama in her Phalli's Field infinity room in 1965.

During the early 60s, she began making her now world famous Infinity/Mirror rooms. These immersive installations involved cladding the interior of entire rooms or smaller, enclosed spaces with mirrors and suspending neon lights which, from a specific vantage, give the appearance of stretching into an infinite void.

The sheer spectacle of the work quickly rose Kusama’s profile, and in 1966 she responded to being snubbed by the Venice Biennale by gatecrashing the event with her work Narcissus Garden. Comprising hundreds of reflective orbs that were scattered on the lawn of the Giardini, the work was one of Kusama’s first major performance pieces as she stood in the middle of what she called a “kinetic carpet”, draped in a gold kimono. 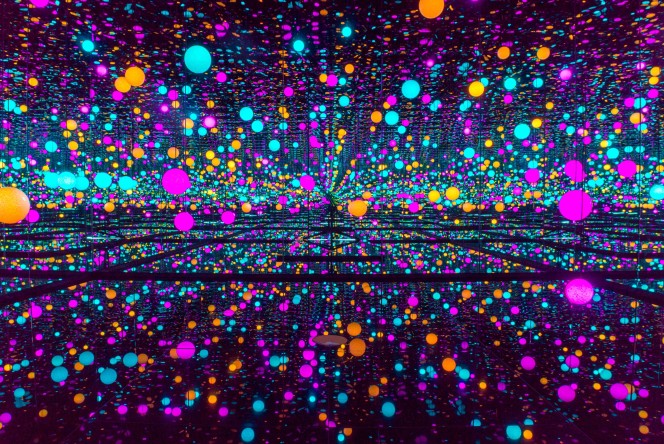 Infinity Mirrored Room - Brilliance of the Souls by Yayoi Kusuma, 2014

Back in the States, Kusama added her voice to the growing anti-Vietnam war movement. In addition to writing a letter to Richard Nixon, offering to have sex with him if he withdrew from Vietnam, Kusama held public performance pieces, often with huge media coverage and full nudity. Her relentless work ethic however, combined with her lack of commercial success, began to take its toll on Kusama’s mental health. Twice she attempted suicide, and in 1973, she returned to Japan in poor mental health, checking herself into a psychiatric hospital four years later.

After leaving New York, Kusama faded in the minds of many, giving her 1989 retrospective at New York’s Center for International Contemporary Arts (CICA) the sense of a comeback. The show was a triumph, leading to Kusama’s official invitation to participate at the Venice Biennale in 1993. Over twenty five years from her last appearance, Kusama once again played an active part in her installation, this time dressed as a magician, stood in an infinity room filled with tiny pumpkin sculptures.

Along with her polka dots, the pumpkin is among Kusama’s most recognisable signatures, reproduced in different scales and colours on several different continents. Notable commissions include her 2006 Pumpkin on Benesse Island of Naoshima, Japan, as well as her two exhibitions: All the Eternal Love I Have for the Pumpkins and The Spirits Of The Pumpkins Descended Into The Heavens, held in 2016 and 2017 respectively, in which she debuted two new pumpkin-themed Mirror Rooms. 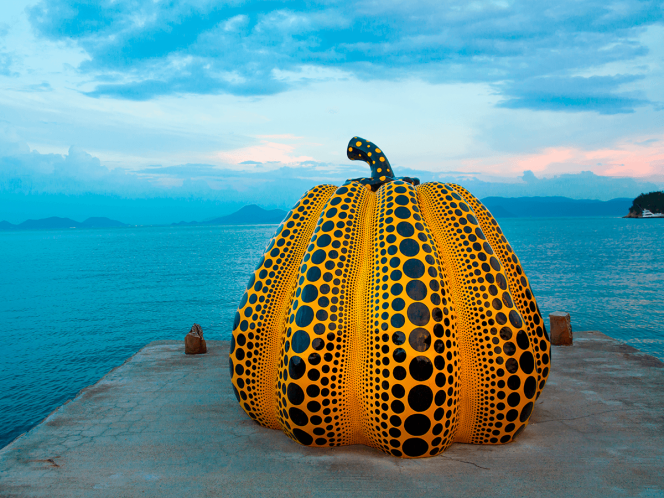