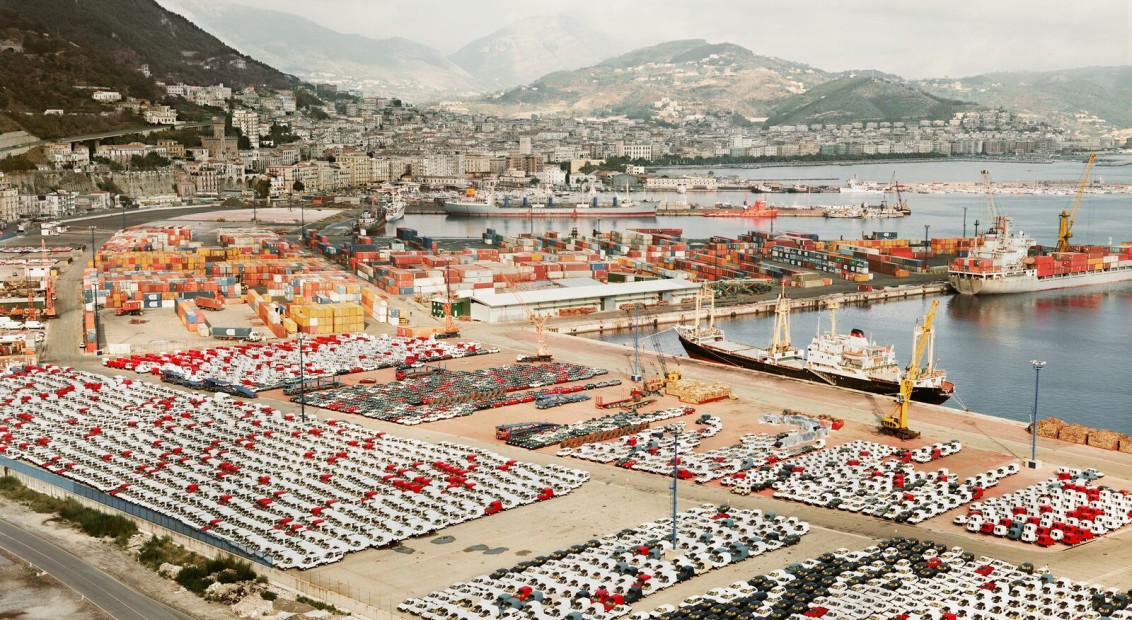 Andreas Gursky: the German photographer capturing the industrial scale of our age

Andreas Gursky is a German photographer whose large-scale colour images not only break records at auction but transform the way photography is thought of. As one of the most coveted photographers working today, Gursky visualises the unimaginable scale of modernity with photographs that pin you in front of them.

Born in east Germany to a family of photographers, Andreas Gursky grew up and studied in Essen and Düsseldorf whose respective photography scenes had a profound impact on his work. In Essen, Gursky first developed his technical skill, studying visual communication under key 20th-century German documentary photographers Otto Steinhart and Michael Schmidt from 1978 to 1981.

From there he moved to the Düsseldorf Art Academy, an internationally renowned mecca of contemporary photography led by legendary German conceptual artists, Bernd and Hilla Becher. Between 1976-98 their photography department produced generations of Germany’s most acclaimed artists – Gursky alone counted Axel Hütte, Thomas Struth, Thomas Ruff and Gerhard Richter among his peers. 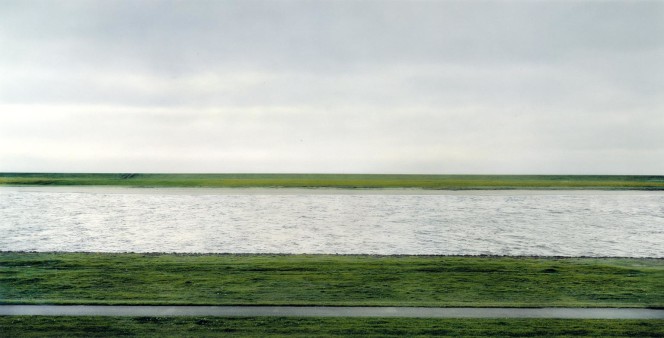 Bernd and Hilla Becher were not only visionary teachers, but groundbreaking artists in their own right who, prior to opening the Academy, had been the first photographers to claim the label of ‘artist’ with their typology series of disappearing industrial architecture in the Ruhr. Gursky embraced these aesthetics, and under the Becher’s guidance, pushed it to broaden the boundaries of photography himself.

Like so many of the Becher’s students, Gursky blurs the idea of photographs as truthful representations. Though he only began digitally manipulating images in the early 90s (after Ruff had already done so), it is a defining feature of his work that subverts the traditional role of photographer. Gursky’s images therefore straddle both photography and art, referencing the visual language of painting – its techniques and compositions – while experimenting within a digital framework. 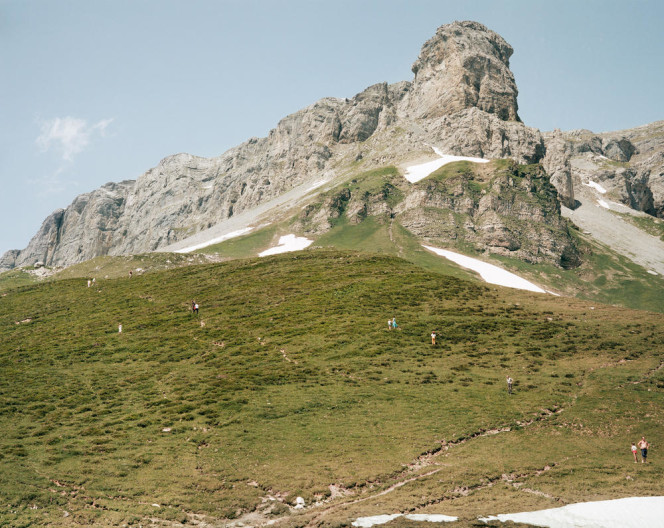 Gursky initially echoed the style of Bernd and Hiller Becher with small, black and white prints, but by the mid-80s he was beginning to grapple with an epic scale that has since come to define his work. This initially manifested in images of people hiking, swimming and skiing while dwarfed by their surroundings (Klausen Pass, 1984), drawing on a sense of sublime that became a central motif for him.

Things really changed in 1990 with Salerno I, the moment Gursky began digitally manipulating his photographs. This scarcely conceivable image of the Neapolitan port city and its surrounding mountains operates on a kind of epic scale best associated with 19th-century landscape painters. Juxtaposing size with detail: the multi-colour cargo awaiting transit, the bustling port and miniature houses, each section of the photograph offers up its own depth that demands hours of individual inspection. This is a constant for Gursky, whose photographs hover between micro and macro both in terms of perspective: the enormous image with microscopic detail, and theme: the local place that reveals a universal zeitgeist of modernity. 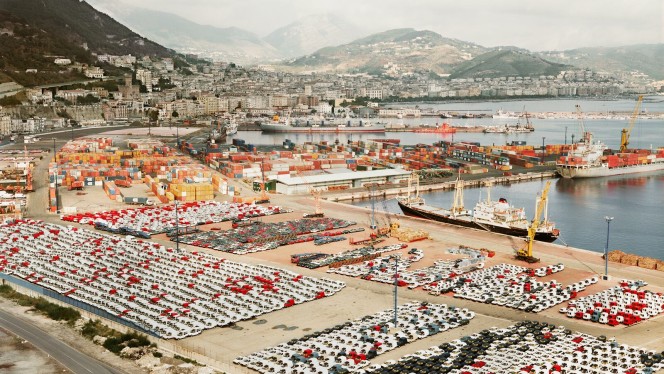 From that point, Gursky began producing large-scale, high-resolution images that explored the scale of man-made creations while largely omitting people. Airports, supermarkets, apartment buildings, mass gatherings in North Korea, rivers, oceans, stock exchanges and landfills all drew Gursky’s attention, not only for their size (Gursky always photographs from a distance, sometimes via helicopter), but for what they reveal about globalisation, capitalism and human consumption.

Despite maintaining his photographs carry no explicit political message, they are bound by this fascination with perspective and scale, not just in terms of physical size (his photographs are often more than 2m), but the industrial forces they depict and what they say about modern civilisation. 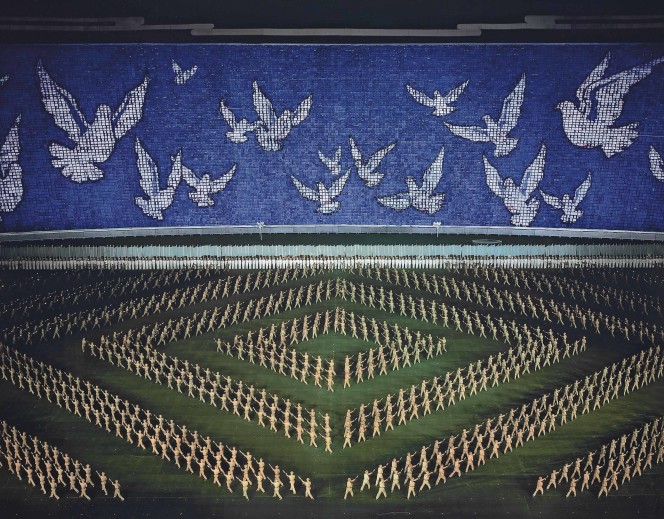 There’s something ironic about Gursky’s photographs of cheap, mass-produced goods breaking the record for the most expensive photograph sold at auction (for $3.34 million in 2007). Taken at a 99 cents store in LA, the photograph is an explosion of colour and minute detail which, like so many Gursky works, is initially difficult to distinguish. It’s only once the eye adjusts that the colour is revealed as packaging, and familiar brands stacked on endless aisles become visible. 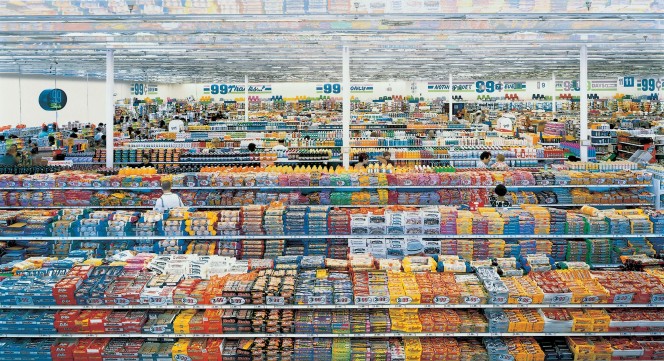 The hyper-real detail and information overload are common elements for Gursky, along with the unusual perspective of the image, which, in the words of Danish curator Frederik Stjernflet, gives the impression of being, “seen from nowhere”. This hypnotic quality gives, “the strange experience of an excess of recorded detail far beyond the point where the viewer’s attention is focused at any single moment.”

In its linear composition and enormous size (measuring over 6×11 foot), the photograph more closely resembles a work of abstract expressionism, yet the scene is banal and could likely be anywhere in the world. That’s the point. With its almost claustrophobic sense of excess and saccharine, ‘pick me’ colours, 99 cent distills the age of globalised consumerism in a single image. Some consider it a biting statement on capitalism and material greed, while others think it’s simply Gursky’s aptitude for finding art in the everyday.