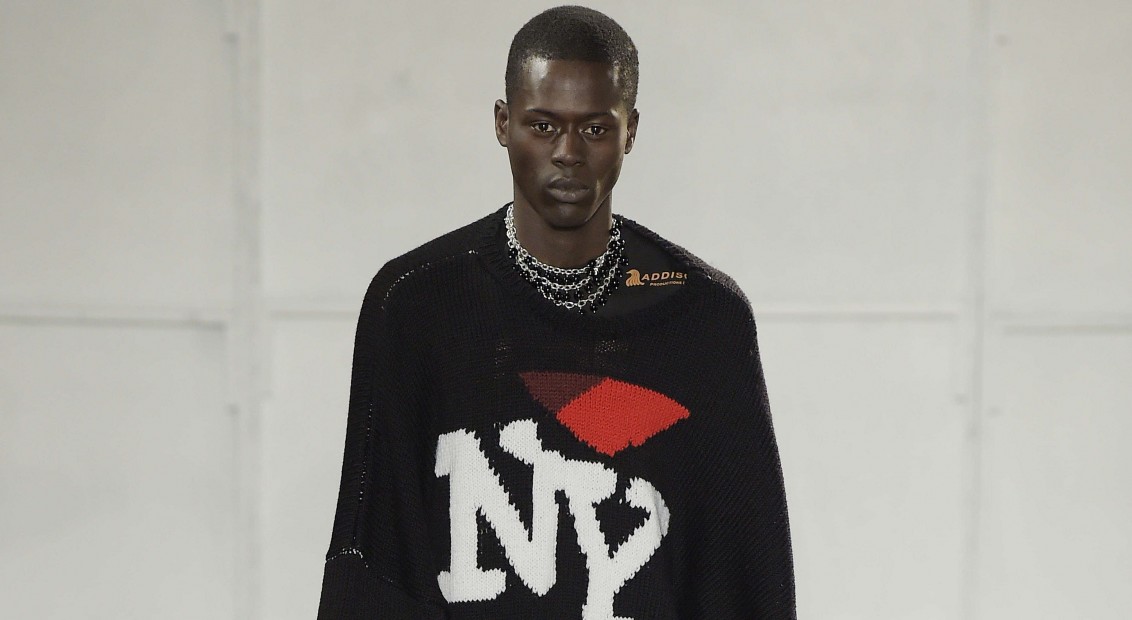 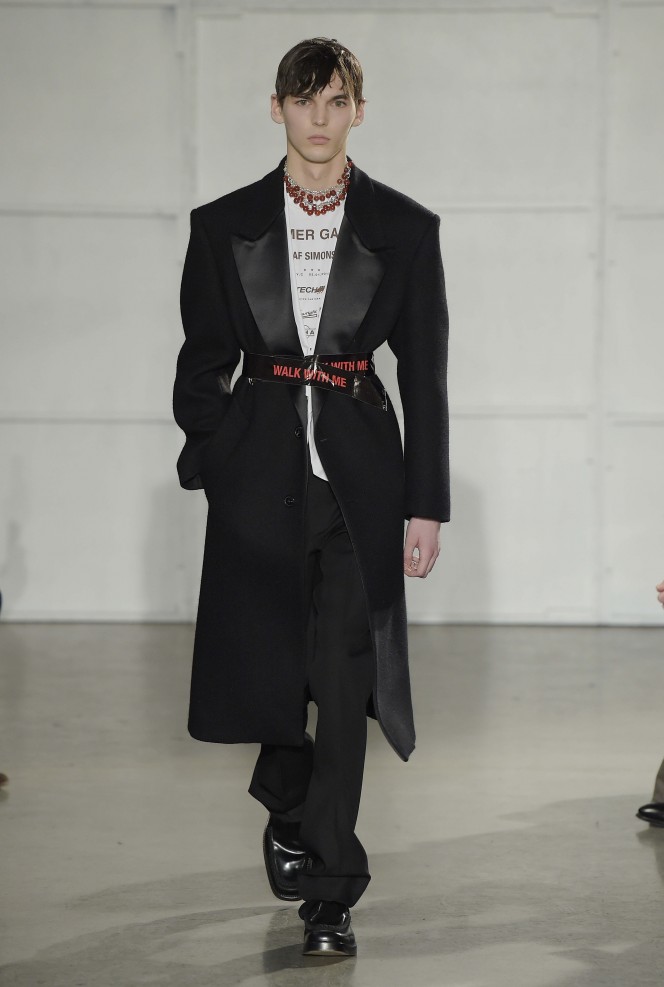 All eyes were on Raf Simons last night in New York as the Belgian designer showcased his collection there – for the first time ever. At the Gagosian Gallery in Chelsea, Simons injected a shot of electricity into New York Fashion Week Men’s with a collection that soliloquised his love for the Big Apple.

It was a major moment for Simons, marking the first time he has shown outside of Europe in 21 years, after relocating his usual Paris show to Florence for biannual menswear trade fair Pitti Uomo last season. But it was just as significant for New York, the city that has recently adopted Simons in his new capacity as chief creative officer of Calvin Klein. Since launching two years ago, NYFWM has struggled to pull off the kind of energy synonymous with other fashion capitals, and Simons’ name on the schedule added major star power.

That Simons chose to pay homage to New York in his collection made the moment sweeter, but – naturally – there was bitterness too. Broad shouldered jackets and coats were cinched with packing tape belts that reworked Milton Glaser’s iconic “I heart NY” logo, while others like “OUT OF THIS NIGHTMARE” referenced the political cyclone the designer has stepped into since moving to America. He has, after all, set up home in a country whose new president openly advocates the kind of discrimination challenged by some of Simons biggest idols. Like legendary photographer Robert Mapplethorpe, whose frank photographic depictions of sexuality and nudity pushed boundaries in the 70s and 80s and who Simons dedicated his last collection (SS17) to.

In light of all this, the feeling of protection that ran through this collection made sense. Those cosy jumpers; the armour-like shoulders on tailored jackets and coats; the knitted arm warmers; the tees that read “ANY WAY OUT OF THIS”; the army green and khaki tones breaking up the sombre prevalence of black; the clunky banker loafers; the rosary-like beaded necklaces strung around models’ necks. And with those “I NY” slogans, Simons was playing on American iconography as much as he was tributing New York’s cultural history and art heroes: there in the smock-shirts and skinny vests that echoed the style of Jean Michel Basquiat, and the graphic slogan t-shirts, not unlike those Keith Haring wore.

And as much as Simons’ collections have always expressed his love of art, they’ve also been a barometer for youth culture, capturing the mood of the time and channeling that zeitgeist through clothes that subtly speak volumes. His collections in the late 90s repeatedly studied teen angst, displacement and (notably) Americana, informed by the feelings of outsiderism that came with Simons’ own upbringing in Belgium. And this season, the acronym RSYP, short for Raf Simons Youth Project, was emblazoned across those graphic t-shirts.

With Simons now living in New York, there’s no doubt that this collection is just the start of a deeper investigation into American identity and youth reality. And for a lot of young people in America right now, reality means protest. One of the other slogans that featured across Simons’ show was “WALK WITH ME”. Twin Peaks reference? Straight-up instruction to march with a placard? If it’s the latter, he doesn’t have to ask twice.