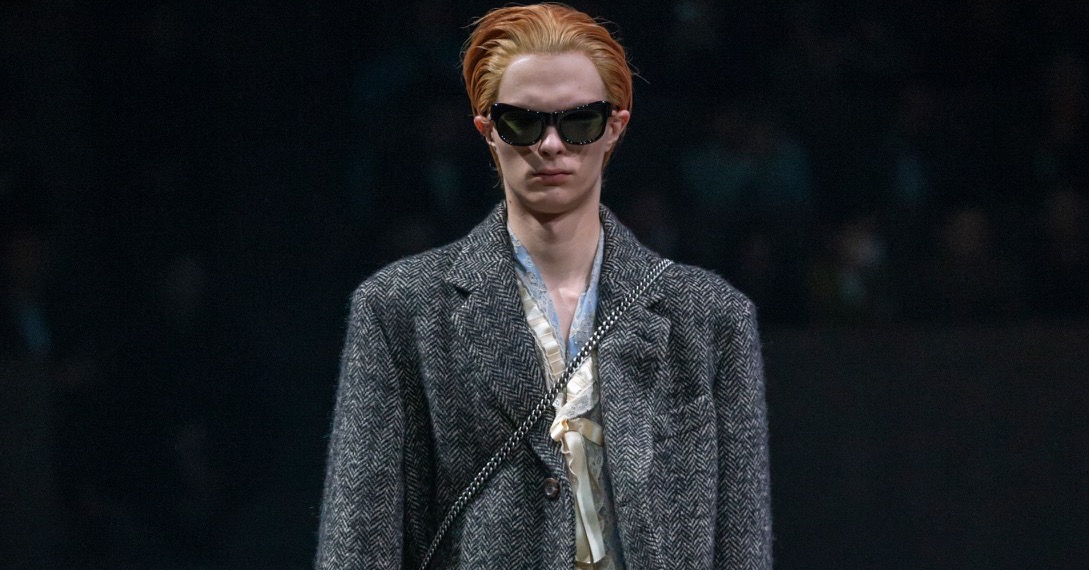 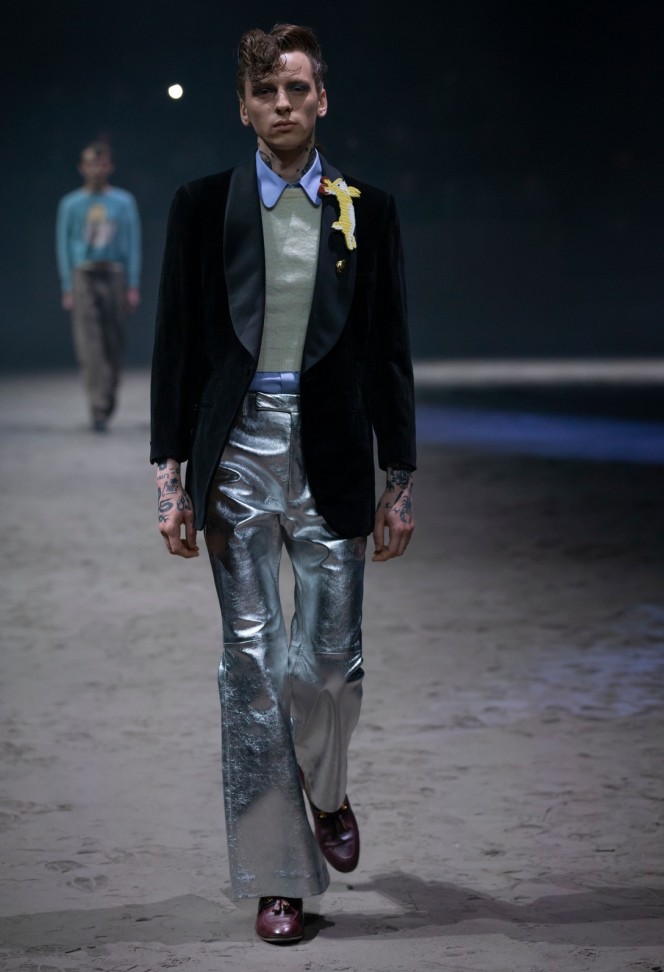 When Alessandro Michele was appointed creative director of an ailing Gucci back in 2014, he quickly set to work rebuilding house codes from the ground up. Gone was the jewel-bright maximalism and disco glamour beloved by Frida Giannini, replaced almost immediately by Michele’s bohemian, 70s-driven aesthetic – one which has since been credited with reviving the house, and spearheading crucial conversations around gender expression in fashion.

FW20 takes this even further. Entitled Masculine Plural, the show’s notes serve not only as a thesis on the toxicity of “violently masculine stereotypes”, but also as a manifesto: a clarion call for men to “practice self-determination without social constraints” and “nourish a space of possibility where masculine can shake its toxicity off, to freely regain what was taken away.”

These notes ended on the metaphor of turning back time, which was referenced heavily in the show’s set. Sand was scattered across the floor of Milan’s Piazza VI Febbraio, as though a thousand hourglasses had crashed to the ground; an almighty rotating pendulum stood centre-stage, oscillating slowly as a cast of typically androgynous models walked out.

This idea of time passing permeated the collection, which graduated from shrunken school blazers and cropped knitwear to chintzy gingham tea-dresses and sensible long-line cardigans. Knee-high white socks were laser-cut with interlocked Gucci Gs, teamed with adorable T-bar shoes and various iterations of the brand’s iconic leather loafers. Cutesy knitted motifs cropped up throughout, and the printed animals that have fast become Michele’s staple were this time almost child-like in their squiggled renderings, mimicking the controversial typography of the brand’s redesigned logo.

A provocative ‘impotent’ slogan tee, layered over a blush pink shirt, rolled-up trousers and a gingham shirt which doubled up as a dress, is going to be everywhere. In the context of the show, it read not as a tongue-in-cheek statement, but as a request for men to drop their obsession with hardness; to eradicate the stigma around softness and femininity. Michele has always done this in his own way, but by subtly dropping shirt hemlines to dress lengths and visually queering masculine archetypes like the punk, and the ripped denim bad boy, he has created arguably the most convincing case for a complete overhaul of menswear to date.