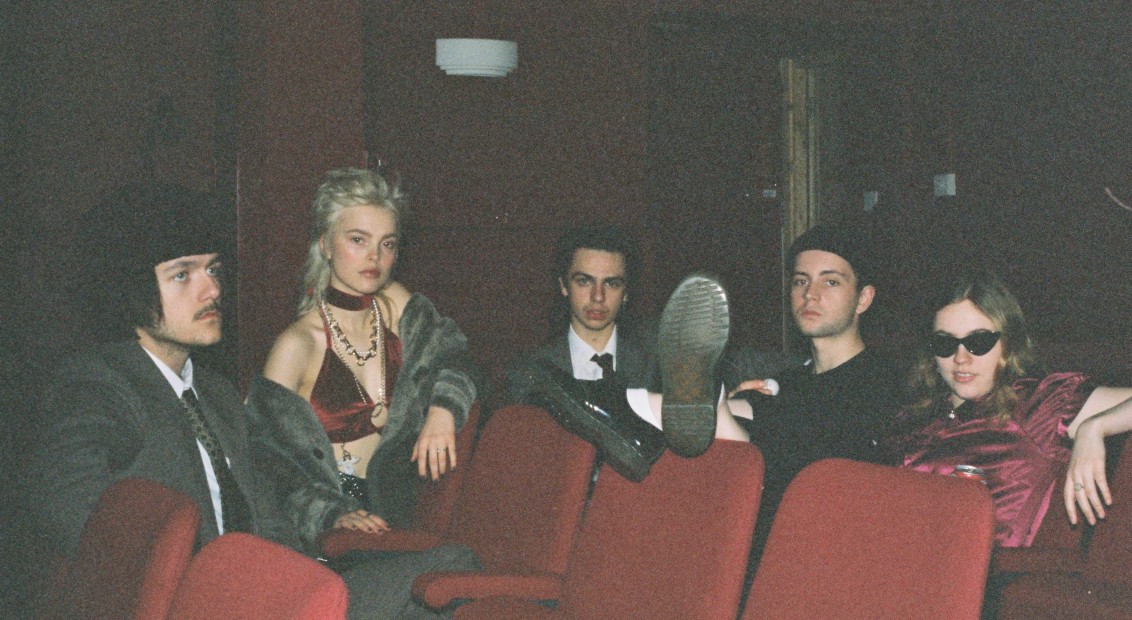 Scotland is an incredibly liberating place to be right now if you’re in a band. Currently in the throes of a new-wave revival, its cities are inhabited by rakish renegades such as The Ninth Wave, Vlure and Lucia & The Best Boys, all crafting polyrhythmic power pop that celebrates not just their own identities but those of their peers, too.

Riding alongside these are Medicine Cabinet. Not too long ago, Hedi Slimane flew them all out to Paris to attend a Celine show and they looked like the coolest people there – a week after they were at a dishevelled house party in North London and the same applied. All cheekbones and peroxide mullet, frontwoman Anna Reeves is a sheer force of nature, and her and her bandmates, Cahal, Eidlih, Josh and Tom are connected by the tightest of bonds and an inherent playfulness. Creating characters within their music – from a real estate agent looking for love to a woman testing her luck under the burning sun – these vignettes of exaggerated life translate from lyrics through the band’s imagery and vibrant on-stage performance; leaving record labels up and down the country hungry to learn more about their Britney meets B-52s balladry.

With absolutely no music online whatsoever, it is sheer charisma and talent that has carried Medicine Cabinet so far. Shitloads of it, in fact. Their refusal to play by conventional standards means they can spend their time doing exactly what they want, whether that’s writing shimmering, spunky pop songs on an Omnichord, selling pink DVDs and glittery lipsticks as merchandise or simply honing the perfect Dolly Parton-inspired stage outfit. The world Medicine Cabinet inhabits is a fun and fearless place that acts as a freewheelin’ riposte to an increasingly niggly world. We spoke to Anna and Cahal about what it means to live through pure empowerment. 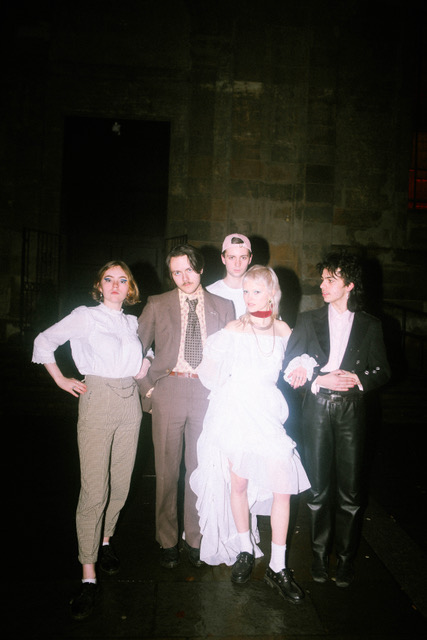 Harley Cassidy: It’s been a year since you shot your first Medicine Cabinet press pictures – what ideas, plans and concepts were discussed between you on that day?
Anna Reeves: A whole year! It was the first time we conceived ourselves as characters in relation to each other and our music. We spent a lot of time discussing artists making work we liked, from lyrical content to merch, album art and imagery. We were thinking a lot about our first gigs, too.
Cahal Menzies: We didn’t want to do the usual act, standing in an alleyway looking all serious. That was kinda boring to us. We planned on making it look like a teen horror film almost. Just having fun with it was the plan and I think it came across.
AR: We’re always chatting about fun thematic things we wanna do later, too, like we’ve written music to fit fun visual things we have in mind, like a cop chase scene or a fancy dress advert or something. A lot of that started that day, it was the first time I had worn all PVC too, that was pretty empowering.

HC: What characters have you worked on so far?
CM: Well I wrote a song called Gentleman and it’s written from the perspective of a man who ends up becoming everything he hates. We also have a song about a real estate agent looking for love.
AR: All of the characters we explore are really just amplified versions of ourselves. We’ve got a song about a woman lying underneath a parasol with sunglasses on, potentially getting sunburn and it’s kind of an analogy for superficial trust – she’s a fun one to play.

HC: What were your emotions and reactions at that first gig?
CM: It was in Sneaky Pete’s, which is a great venue in Edinburgh. We decided to do it because the pressure of having to have half an hour of songs helped us finish our earlier ideas. We’d only been practicing for a month or two.
AR: I wasn’t nervous before it, but I was shaking after. I was so proud of everyone. We were a feminist punk band in the beginning, too – so very sweaty. That ethos is totally still there.
CM: I sang a punk song about a dog at the end and I jumped into the crowd and hit my lip on the mic – good times.
AR: I was the go-to ballad girl at school too, so it felt ridiculously good to sing the music I listened to and say the things I wanted to say and not have to stand still whilst doing it.

“…we’ve written music to fit fun visual things we have in mind, like a cop chase scene or a fancy dress advert or something.”

HC: Your live shows are all people have to go off at the moment – how have they progressed and how does a typical Medicine Cabinet show play out?
AR: We usually start off the show with the ad-lib button on my uncle’s old keyboard. The setlist changes slightly when we’re onstage, too, depending on what feels right. We all swap instruments throughout and try to have as much fun as possible.
CM: We sound better as a collective, for sure. I think we’ve always had a good bond in a musical sense anyway so we’ve just been learning each other’s language, if you get me? We like a bit of theatrics thrown in the mix, too. We recently got sample pads, so playing with them has been fun. I try and upstage myself every gig, too.

“The setlist changes slightly when we’re onstage, too, depending on what feels right. We all swap instruments throughout and try to have as much fun as possible.”

HC: Glasgow’s art scene is thriving right now, there seems to be a real community up there.
AR: Our mates’ bands are great up here. Walt Disco, The Ninth Wave, Lucia & the Best Boys, Catholic Action and Cheap Teeth are some particular faves. There aren’t many places in the world where art is still tied to its location, but Glasgow still has that, somehow.
CM: None of the Glasgow bands sound the same, so you’re never bored. The art school is also great cause you’re surrounded by like-minded people who are open to a lot of different ideas. The two worlds bleed together forming a vibrant community of nutters.

HC: Do you both go to the art school?
CM: No, just me. I’m doing painting. But we all brush shoulders with everyone there.
AR: Me and Eilidh [O’brien, band member] study at the art school in Edinburgh. I specialise in the sociology of music and culture, she’s into production and history of music. I did some life drawing and approaches to visual culture this year.
CM: I fucking hate life drawing.
AR: I love it! Let me draw your naked form!
CM: My mum’s an artist so I’ve always had a different frame of reference for what art is. To be clear – not better, just different. Going to private views from a young age, being exposed to a wide range of art, questioning what’s allowed and such.

HR: The Celine campaign is really cool and has become a milestone for a lot of young bands from the UK. How did the connection with Hedi Slimane come about?
AR: We got an email asking us to come to London to shoot that weekend and then another asking us to go to Paris for fashion week a few months later. Hedi and Celine have worked with some of our best mates’ bands and I’ve modelled for a while.
CM: I love his work. His appreciation for youth culture and music really comes across in photography and clothing. I’m really enjoying his movie selection on Mubi, too.