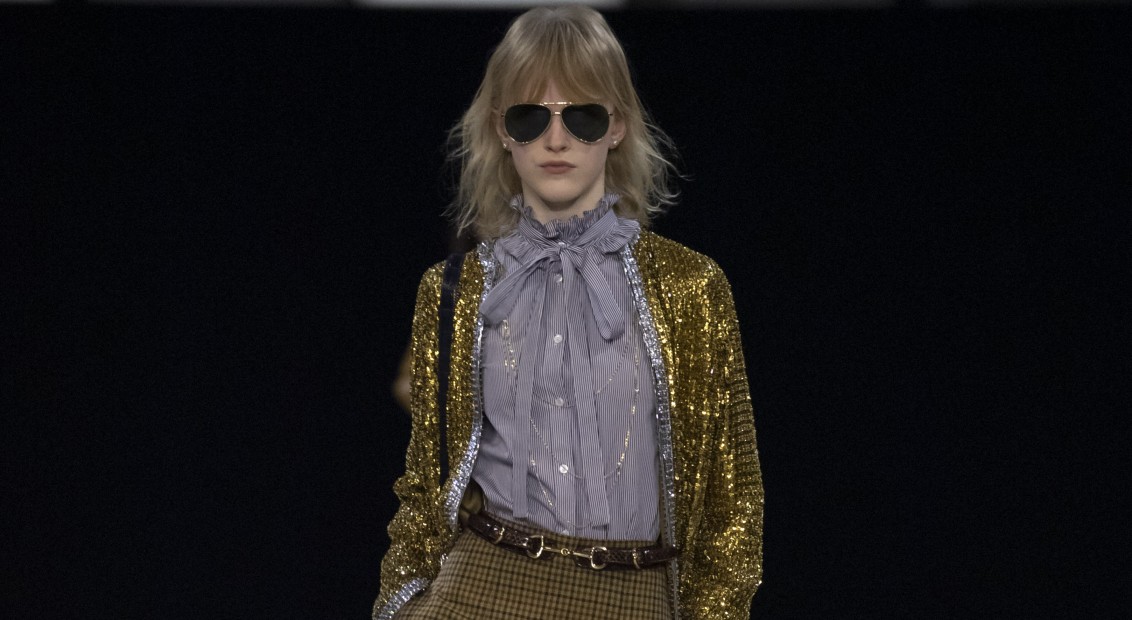 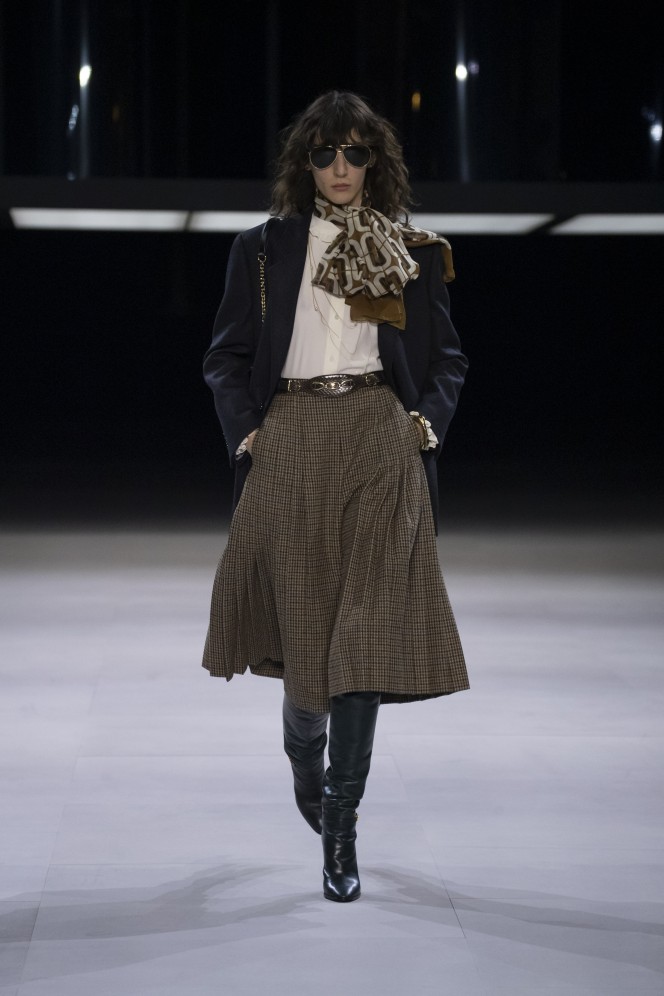 Hedi Slimane’s debut SS19 womenswear collection for Celine hit reset. Taking up the position as creative director, he drew the house codes with his own, presenting a vision of new wave Paris that represented a core building block for his Celine vision.

Between that debut offering and this season, we had Slimane’s menswear Celine debut, which acts as a vital reference point for what was to come yesterday. An homage to London’s new sonic generation, we got classic pieces – herringbone overcoats, tailored suiting, loafers and V-neck knits – reinterpreted with fresh vigour for a new youth.

Once you understand that point of inspo, you’ll be ready to digest the designer’s FW19 womenswear: the second step on an ongoing ladder that looks to recalibrate and reaffirm the Celine women via Hedi’s own laser-focus.

To a jolting sonic intro – with simultaneous lightbulb flashes – a model stood in a mirrored glass box above the catwalk, which slowly lowered to ground level like an amazing sci-fi elevator from Logan’s Run. The music kicked in with an important refrain: “I have a plan”.

As the model stepped out in a pleated, check skirt, prim white silk shirt, blazer, leather cuissardes, silk scarf and a pair of aviators obscuring half her face, the scene was set. Here was Hedi giving us his vision of the classic Celine woman. Before Philo, before Kors, before accents or typeface discussions. Google ‘vintage Celine campaigns’ and you’ll see exactly where Hedi was pulling from – Céline Vipiana’s founding designs.

If last season saw “Hedi’s Celine girl plucked from the back booth of a Parisian haunt”, this time around she was hitting the bougie bars – Les Bains, Bar Hemingway and Closerie des Lilas – where literary’s finest used to scrawl whilst they quaffed.

We got tweed culottes and blazers, sheepskin gilets, sweaters and stonewash denim. Wool, camel coats, shearling flight jackets and pussy bow blouses. All these girls were missing was a slim cigarette and Braque du Bourbonnais by their side.

Aviators worn throughout, there was something very 70s about the tan, leather bombers, silk scarves and over-the-shoulder gold-chained logo handbags, something very Sylvie Vartan, almost Jacqueline Onassis (circa 1970s) even. While other pieces – those knee-high, leather boots and leather culottes – seemed to nod towards Michael Kors-era Celine. But fret not, there was still plenty of glam in those thick fur coats, animal-print pieces and full sequinned looks – Jane Fonda in Klute? Absolutely.

As has become Slimane’s signature, the finale saw the model cast walk together for their final bow: Hedi designs for movements – championing a new youth with utter dedication – and dynamism – to the cause. Makes it exciting, doesn’t it?