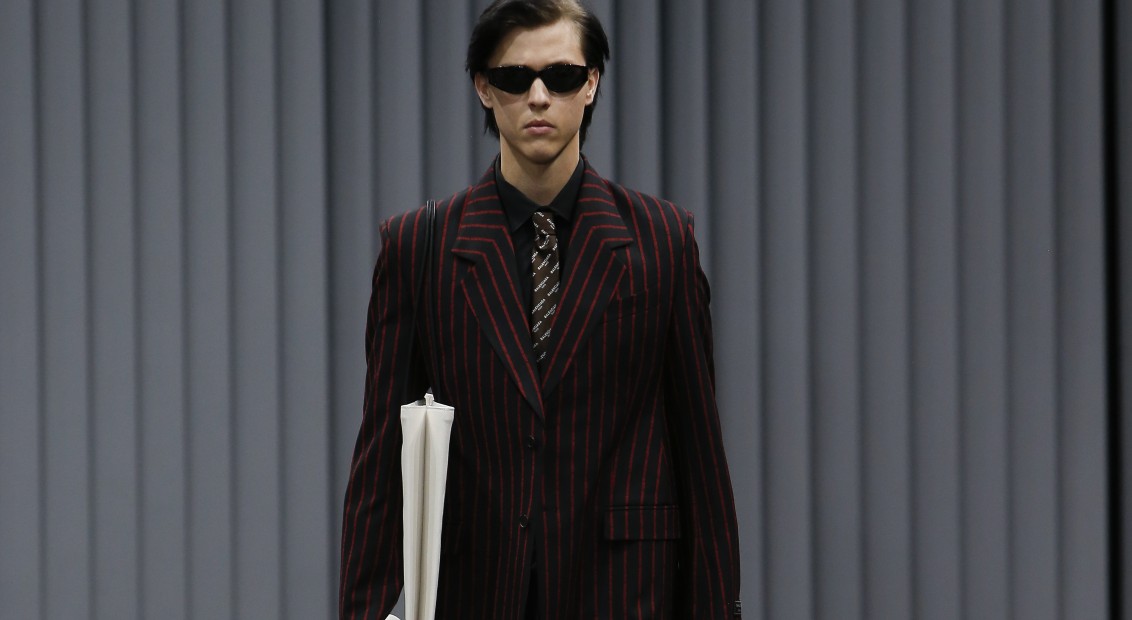 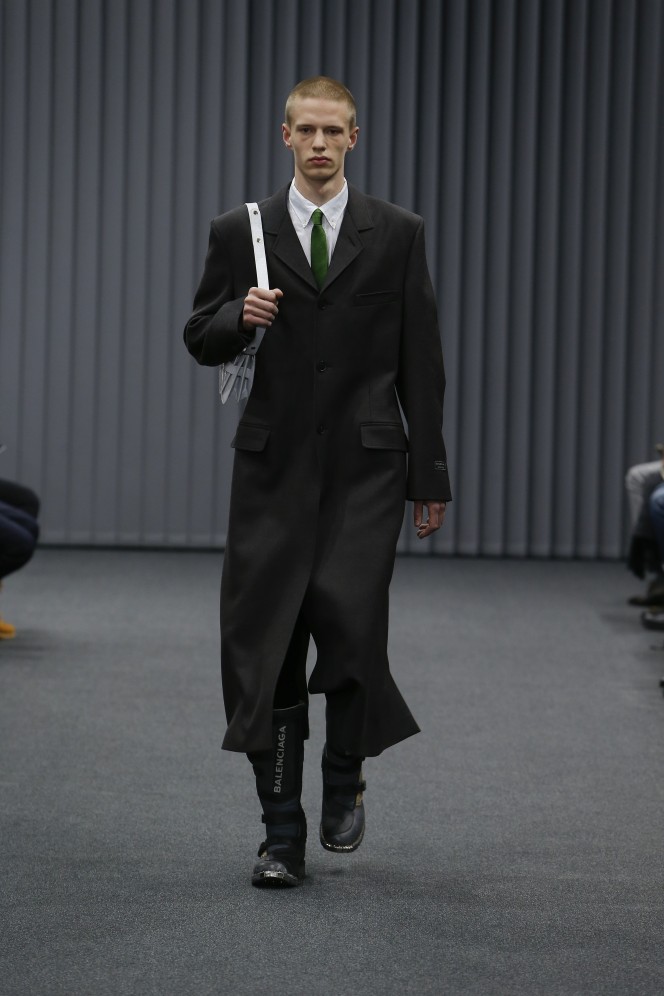 Demna Gvasalia is taking no prisoners in carving out an identity for Balenciaga menswear. Today in Paris he continued what he started last June, building on his proposition that meshes the house’s tailoring DNA with his signature pop culture accents.

Prior to Gvasalia’s entry, Balenciaga menswear was presented in a showroom, out of the spotlight traditionally filled by the house’s womenswear. For his debut collection last season, the designer stepped it into the light. Literally – the show was held on the glass walled sixth floor of Lycée Saint-Louis-de-Gonzague, offering 360 degree views of Paris’ 16th arrondissement. All that space gave air to Gvasalia’s study on tailoring, an ode to Cristobal Balenciaga, a master tailor himself.

Entering the FW17 venue today things immediately felt darker, more introspective. You would have been forgiven for thinking you’d stepped into a conference by accident, what with the basic boardroom chairs and the dull grey carpet all over. And so, we were set for the next chapter, with a corporate twist. Gvasalia is often preoccupied with ideas of subverting the norm – just take Vetements’ cigarette lighter heels, and those DHL logos. Where his debut collection experimented with the suit, this season he meditated on its most common function. What’s that? Workwear, Gvasalia thus examining the idea of corporate dressing, but in a modern context. In 2017, where tech and sport industries are breaking down traditional notions of dressing for work, buyers are looking to clothes that merge custom with comfort. And so, the exaggerated shoulders of last season’s suit jackets were paired with super low-cut trousers, man-bags and a version of the chunky Triple S sneaker, models looking like businessmen en route to the office. Pyjama pants came in luxury-grade wool, like a work-appropriate take on the track pant, and several pieces were internally quilted, like a the shirt-peacoats. There were whiffs of 90s and 00s Wall Street cliches, merged with something very sci fi – like the very Patrick Bateman plastic-finish coat that also wouldn’t have looked out of place on Batou, the fighter from the original Ghost in the Shell anime film. Not to mention those Matrix-esque sunglasses, and the heavy duty biker boots à la Cereal, Matthew Lillard’s tech-head character in 1995’s Hackers.

Considering what’s happening in the States – and in the UK, with yesterday’s cutthroat Brexit speech from Theresa May – the overwhelmingly sombre mood felt fitting. And what with the Obama administration in its final days and Donald Trump’s inauguration hanging over us like something rotten, there’s no avoiding the fact that Paris will be punctuated with designers’ statements on the political status quo, some more covert than others. Gvasalia isn’t one to do things by halves, and so ‘Balenciaga’ appeared in blue and red, spinning off the campaign logo of Bernie Sanders, the democratic socialist whose progressive ideals filled the presidential race with hope for politics yet. Whether Sanders would be down with this association – with a luxury brand owned by a global conglomerate – who knows.

There were also Democrat-blue blanket scarves and Republican-red ties, a “novelty” for “men who’ve never worn suits.” And so Balenciaga’s target market was stated – the kind of men with serious cash to splash, who might view Balenciaga as an elevated, luxury alternative to Vetements. Of course, you could still pick out pieces that would appeal top a less fashion-forward customer – like those roomily tailored jackets, and the long overcoats, slightly nipped in at the waist but classic enough for regular wear. But the real attraction here is for a new luxury customer: one who gets Balenciaga, knows the name Demna Gvasalia, and subscribes to the futuristic identity the designer is fleshing out for the house’s menswear. Whether the approach works, time will tell – but for now, Gvasalia is making serious waves.