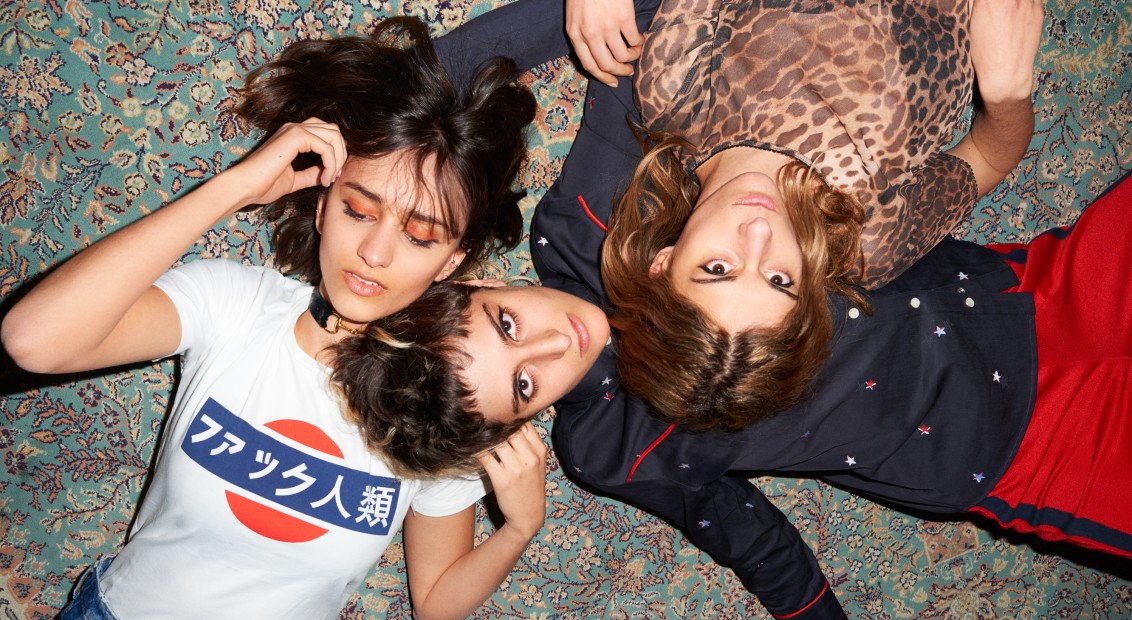 The sister trio smashing gender stereotypes with an empowered sound

Turn your ears towards Denmark, something is bubbling. The Scandinavian country may be more known for its design credentials than for its musical contributions, however a new wave of musicians are proving that Denmark as a hotbed of exciting new talent. Stretching a broad range of genres and sounds, COPENHAGEN RISING is our portfolio of those musicians standing at the vanguard of Denmark’s rising scene. Having already heard from Iceage and Marching Church frontman Elias Bender Rønnenfelt, now we turn our attention to sister-trio Velvet Volume.

Riding the wave of a Danish music scene gaining momentum come trio Velvet Volume. Comprised of three sisters, (twins, Noa (guitar) and Naomi (bass), both twenty, alongside their eighteen-year-old drummer sister Nataja) the band have been creating ripples across Europe with their sell-out live shows and a sound that recalls the early 00s halcyon days via the exuberance of The Runaways.

Though they only started performing as an official outfit in 2013, they’ve been playing music together since the age of five and played their first festival at sixteen. With four singles currently buzzing about online, the trio are taking things in their stride. Currently holed up working on their debut album (due for release in October), the energy around them is only set to get more frenzied. 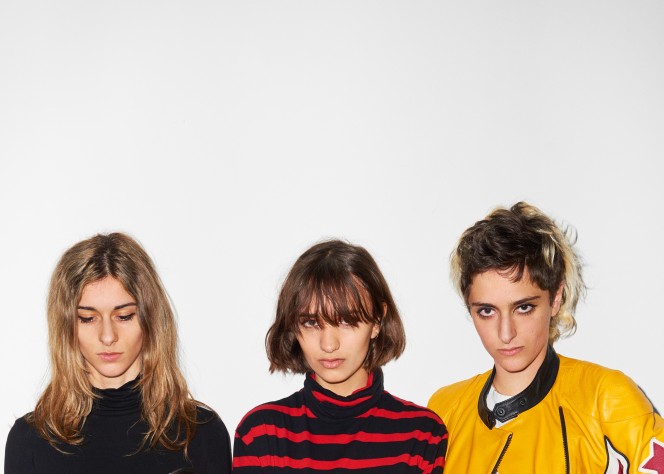 Em Smith: I read that you’d been playing together since you were young kids.
Noa Lachmi: Yeah we were very young. Our parents had a lot of music around but none of them were professional musicians or taught us how to play, they just loved music
Nataja Lachmi: Me and Naomi started playing piano and Noa played Spanish guitar and classical.
Noa: Slowly we began to form a band; it was very natural, there was no sudden decision one day. We started developing our sound but it took maybe ten years to develop something solid because we started off just playing fun stuff, covers like Jimi Hendrix, David Bowie…
Nataja: We were then booked to play this music festival in Denmark called Grimfest, which was our first really huge concert… Then we had to create our own songs.
Noa: It actually felt very natural because we wanted to get big, be rock stars, so we knew we needed to make our own music; it was the only way. We’d only been writing for a few months and then I thought, “Oh my god, I want to play a festival,” so I wrote to all the huge festivals like Roskilde and Smukfest to see if they wanted to book us, which was really foolish because we didn’t know shit about the music industry, but then Grimfest emailed us asking us to play the smallest stage, at midday, when nobody was going to be there… But we were like, “Oh my god, this is huge!”

Em: Did you have to start writing really quickly then?
Nataja: I think we only had two or three songs and we had a 30 minute time slot!
Naomi Lachmi: We practiced all summer for it, it was a big thing for us.
Noa: It was the first time we’d ever played for strangers. Before that, it was just at home for family and friends.

Em: How did you cope with playing your first big gig? I think I’d freak the fuck out.
Nataja: It sounds so cheesy but it made us realise our dream could actually come true. We never thought it would be a real possibility.
Naomi: We were just so young I don’t think we knew what was actually happening.
Noa: We weren’t really thinking, ‘What does the world or the music industry want?’ We were just writing the stuff we loved… It went really well because we then realised that people in Denmark really wanted this kind of rock music, this real, raw kind of sound.

Em: So what influenced that early sound of yours, who inspired you?
Noa: Jimi Hendrix, White Stripes, Rolling Stones, Queens Of The Stone Age…. But we also loved pop and electronic music.

Em: Yeah, the pop element definitely shines through in your sound. Is that something you try to hold on to?
Noa: Yeah, I guess we have a lot of pop style melodies in our songs but it’s not something we think about. Right now I’m inspired by Grace Jones and New Order. It’s very rare because people assume we don’t listen to that, if it sounds pop-y, it’s not something we’ve ever sat down and discussed.
Nataja: When we write music we’re not looking for a particular sound, we just play what we want. There’s never a certain direction we try and head in. If it sounds good then we play it.

“A lot of people and the media will think it’s easier for us to get famous and win attention because somehow it’s still rare to see girls playing rock music and it makes me sad because people think we had the wrong reasons to start a band.” 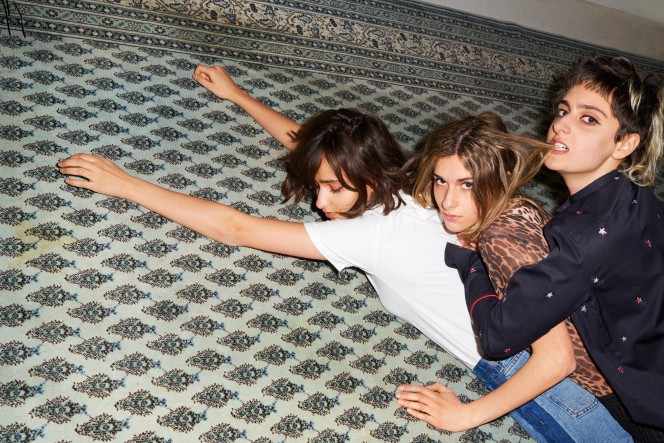 Em: Noa, you mentioned Grace Jones, she’s one of the greatest performances I’ve ever seen.
Noa: Yes! She’s so amazing, so inspiring, just epic! She was really high when I saw her, she had a stripper on stage and wore this incredible African outfit with a whip and she sat on the security guard [laughs]. She was just amazing, so strong and cool.

Em: She’s just who we all wanna be when we grow up, right?
Noa: Oh yeah, but I don’t think I could ever be that cool.

Em: No, I don’t know if anyone can! We can dream. So I know the gender question will get thrown around a lot…
Naomi: It’s not something we even thought about until after we got involved in the music industry.
Noa: I think now that I’m especially getting into feminism, I have more awareness and confidence speaking about it. When we started three years ago it wasn’t something we’d ever thought about. Then after a couple of gigs we realised there weren’t any girls around, even the people who worked at the music venues were all men.
Nataja: We’d get comments from men saying, “Why do you girls play rock music?”
Noa: “Oh my god, can you play that guitar? Wow, that is so cute.” We were like, “Fuck. You.” It took us a couple of years to start getting respected. The other side of it is that we know because we are girls, a lot of people and the media will think it’s easier for us to get famous and win attention because somehow it’s still rare to see girls playing rock music and it makes me sad because people think we had the wrong reasons to start a band.
Nataja: That’s why I think people can accept us more now, because they have seen us. They hear the music, see us play and know we’re just about that.
Noa: We want to inspire other girls too, to tell them that it’s OK; you can be a girl, you can play guitar… It’s not like you have six fingers or something. When we did interviews with press in the beginning, we were like, “We don’t want to talk about our gender, we don’t want to talk about the fact we’re girls,” because we weren’t very confident about that topic and we just wanted to talk about the music and avoid those questions but now it’s something we want to do.
Nataja: Now we feel like we should use our voice. We also found we could inspire other girls to start playing music.

Em: You’ve got a live reputation that precedes you. How did you build that up?
Nataja: Last summer we were playing festivals in Denmark pretty much every week.
Naomi: We built a huge audience just through our live shows.
Noa: We only had a couple of double singles and no record label at the time.
Nataja: So it’s quite weird that we were able to play these big shows and people wanted to hear us when we didn’t really have any published music. We definitely focused more on live shows rather than recordings, but right now we’re working on our album.

Em: Being a family band, how do you think that effects how you work. Can it get pretty intense?
Naomi: Being sisters can be a benefit and also a negative issue but we’ve always just made music together.
Noa: I think because we’ve been together forever we can’t really separate being professional musicians and just being three sisters. Also because we’ve never played with any outsiders before, we don’t know how it would be so we have nothing to compare it to.
Nataja: We’ve all always had the same goal and the way we communicate when we play live, it’s almost like… [gestures between her’s and Noa’s head].

Em: Telepathy?
All: Yes!
Noa: We don’t have to speak, we kind of know what the other is thinking. And another good thing is we can speak really really honestly with each other… We can maybe be kind of mean, but it all comes from a good place.