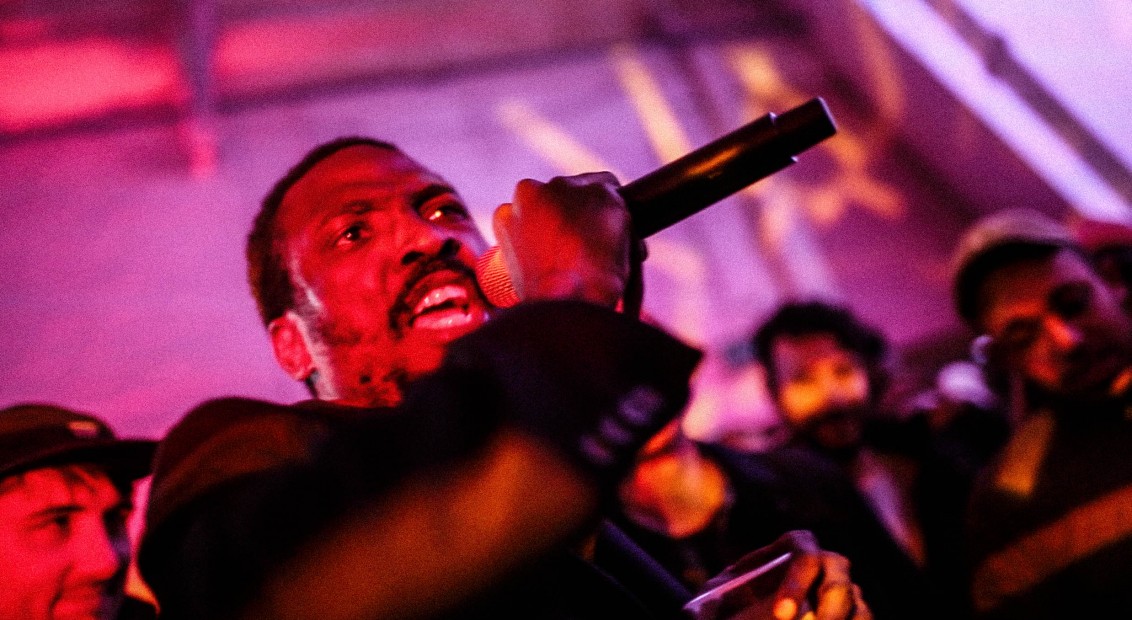 These young artists are changing the world through spoken word

Fusing poetry and music together is by no means new – from the Beat Generation pioneers to the likes of Gil Scott-Heron, artists have been playing with the spoken word for decades. Foregoing tradition, forgetting linear structure and rejecting the standard narrative, they used their words to stand up to the societal values of their times. Now, there’s a rising new guard with the same outspoken mentality.

Just take Warsan Shire, the British-Somali poet who, in 2014, became London’s first Young Poet Loreate and whose raw reflections on home, family and displacement were quoted on Beyoncé’s 2016 visual album, Lemonade. Or James Massiah, the politically charged South London poet and musician who featured on Massive Attack’s latest single, Dear Friend. In Solange’s latest album, A Seat at the Table, as well as in Frank Ocean’s newest offering, well-known artists break into longer spoken word interludes disrupting the expected form and style of their practice. It seems to say, “You need to listen and we need you to focus; we are offering you a new vision, one that breaks down form because we don’t need it. We don’t need to adhere to your standards and conventions. Why? Because this content is new.”

Last week, James Massiah presented Boiler Room & Saul Williams’ ‘In Appreciation of Lyricism’, an evening celebrating the art of lyricism – and its recent shift from the underground to a more mainstream current of recognition. Headlined by Williams, the American rapper and musician whose blend of poetry and hip hop is the stuff of lyrical legend, the night spotlighted an array of talent from Kate Tempest to lesser known performers like Sophie Lesberg Smith, Belinda Zhawi and Kojey Radical.

Here, these rising stars of London’s rising lyrical scene tell us why poetry deserves to be stepped into the light. 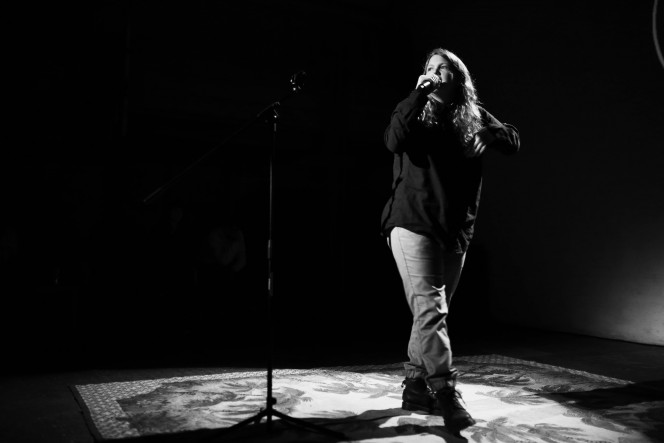 Jade Jackman: Recently, you were asked to collaborate on Massive Attack’s new album. How did it feel bringing poetry to that?
James Massiah: Was an honour being called in to collaborate with Massive Attack, considering their creative legacy and stature. I think someone from their side saw a piece of mine that I’d performed and thought my vocal style would work well on a track, and considering they’d recently worked with Tricky and Ghostpoet it perhaps didn’t feel like too much of a departure to work with someone who, in the traditional sense at least, is using a more conventional style of poetic delivery.

JJ: For some years now, you have been running and curating poetry events in London. You must have heard so many… What makes a poem stand out to you now?
JM: I’m definitely drawn to poetry that contains some truth  relevant to me and my ideals. Certainly work that is transgressive, morally or stylistically so has captured my imagination more as of late.

JJ: What does lyricism mean to you?
JM: I think of lyricism as the business of stringing words together with some notion of aesthetics at the core

JJ: Do you see fusing poetry and music together as mixing genres?
JM: In some ways, I suppose. Song lyrics are at times considered poetry, but in being sung or rapped they take on a new form. The idea of having spoken word layered with music in a way that isn’t metered to sync is by no means new. But, it is a combination that is seen less often than the former two styles. Due to that, it might appear to be a more stark contrast and as such appear to be a more deliberate mixing of genres.

JJ: Do you have a favourite line of poetry or music you’d like to share with the readers?
JM: Walt Whitman’s Song of Myself: “I am not the poet of goodness only, I do not decline to be the poet of wickedness also.”

JJ: What does lyricism mean to you?
Sophie Lesberg Smith: Lyricism means fluidity and ability to say whatever you want or feel. It has no boundaries, it’s demonstration of flow can take anyone anywhere.

JJ: Post-Brexit, do you think events that bring lyricists together are more important than ever as they bring together a mix of people?
SLS: Yes it’s important to be able to connect with as many people as possible through every medium, especially in this post Brexit world that’s been decided for us. You can learn so much about others through international platforms like Boiler Room, we are all so lucky to have these mediums from which to showcase work.

JJ: Do you have a favourite line of poetry or music you’d like to share with the readers?
SLS: “No need to dust off flat caps, flats built of flat pack furniture, screw loose on reality, hook onto that climax, take us to the next place, with him, her and, uh, that face. We fall from grace.” – by The Interviewee.

JJ: What does lyricism mean to you?
Hector Aponysus: For me lyricism is the duality between the emotional response of a sentence and the manipulation of sounds. It’s the convergence of language and intelligent noise. In a way I think the world is almost impossible to reflect in real terms, our references and experiences are so complex that it’s only possible to reflect them coherently in a similarly abstract way, lyricism is that vehicle.

JJ: Do you see fusing poetry and music together as mixing genres?
HA: I think it depends what you identify with within poetry and how you define it, as someone who’s only poetic references come from hip hop and vocals in music I can’t really separate the two but for other’s I guess it’s different.

JJ: Considering the current world climate is it important that we come together and celebrate genres of art we all love, despite our differences?
HA: Living in an authoritarian environment such as this it’s easy to individualise your experience. For me its never been more important to interact in this way, for the catharsis alone. It’s nothing new to channel frustration like this. I feel like genres like grime, road rap, hip hop etc are our generation’s heavy metal and I guess a lot of the poetry I fuck with draws on those genres. In the same way that those sounds provides an outlet, and that’s coming from someone with very few societal restrictions on them.

JJ: Do you have a favourite line of poetry or music you’d like to share with the readers?
HA: “Positive steps will see your goals. Whether it’s dollars or control, feel the gold.
I ain’t helping you climb the ladder. I’m busy climbing mine that’s how it’s been since the dawn of time.” – Mike Skinner

“Living in an authoritarian environment such as this it’s easy to individualise your experience. We need to be able to act out frustration, violence and disillusionment in a safe way, most importantly to do it collectively” –Hector Aponysus

JJ: What does lyricism mean to you?
Belinda Zhawi: It is, to me, the expression & distillation of emotions and life experiences using language – written or otherwise. I also see it as a way of approaching realisations about life & situations through the use of beauty and relatability.

JJ: Do you see fusing poetry and music together as mixing genres?
BZ: Not always because most times there is already music in poetry and vice versa. It will all depend on how we are defining poetry. 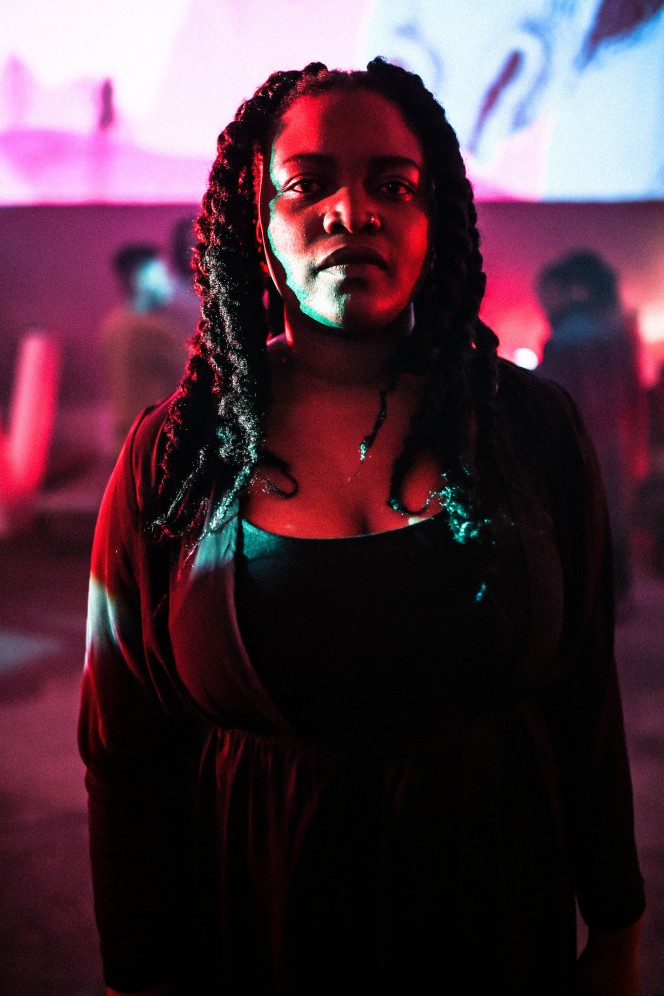 JJ: Post-Brexit, do you think events hosted, by international groups like BoilerRoom, are more important than ever as they bring together a mix of people?
BZ: Brexit or nah, the work being or waiting to be done by international groups should continue or aim to place importance on bringing people together in a way that allows the exchange of ideas. I think it’s important to continue showing one another in as many mediums as we can that humans share a lot more similarities than they do differences. I like to think understanding similar life trajectories to our own will put us in a position where we appreciate other people’s differences more instead seeing them as threats.

JJ: Do you have a favourite line of poetry or music you’d like to share with the readers?
BZ: I couldn’t give you a specific line but I’d recommend a book called Citizen by Claudia Rankine. It was the Forward Prize Collection of the Year in 2015. It’s a book of our times that really works to centre the experiences and voice of many people of colour (especially Black people) living in the West. Every line in that book hits hard. It’s a must read for anyone who cares about the equal treatment of all human beings in today’s society.

JJ: What inspires you to write today?
Kojey Radical: As cliche as it sounds, life and the everyday things we encounter play a big part in shaping what I choose to write about. The conversations we have in private, the thoughts we share out loud. The way we walk, talk and see the world as an entire generation provides an endless amounts of inspiration. I realised my skill set was in story telling and being able to speak on things that are important to my generation.