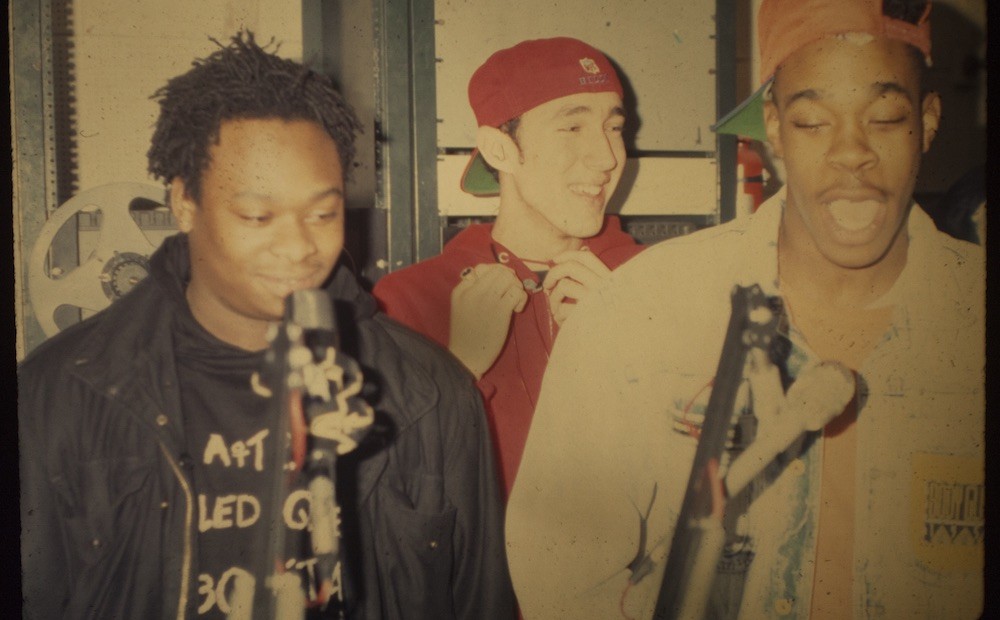 Think of just about any game changing 90s hip hop artist and it’s likely Adrian ‘Stretch’ Bartos and Bobbito Garcia broke them to the world. Every Thursday during the 1990s from 1am–5am on Columbia’s WKCR radio station, DJ Stretch and host Bobbito commanded a loyal following of listeners spanning hip-hop heads to prison inmates and industry execs. The pair were known for their on-air comedy and championing of unsigned talent in inviting artists to perform freestyle raps. Careers of Nas, Biggie Smalls, Jay-Z and Wu-Tang Clan; you name it, they launched it.

To mark the 25th anniversary of their first show, the duo’s story is captured in a new documentary, Stretch and Bobbito: The Radio that Changed Lives. Directed by Bobbito himself, the film features previously unrecorded verses from Biggie Smalls as well as taped footage of the studio sessions. Following the film’s premiere at the BFI London Film Festival, this week it hits screens on general release. Here, Stretch reflects on what made those 90s stars such legends – from the importance of free speech and the pre-internet rituals of music discovery, to modern hip hop – including Drake’s lack of lyricism. 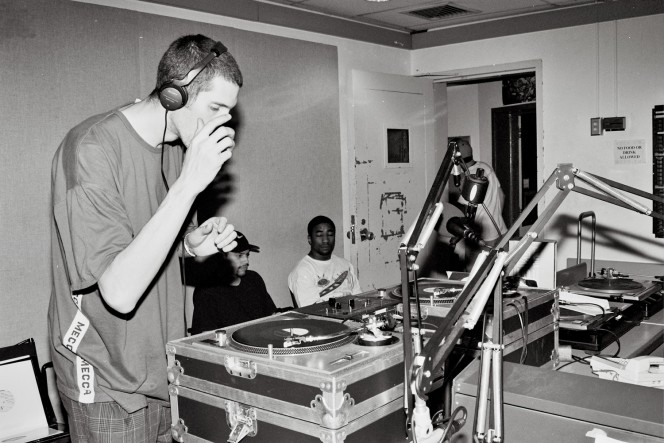 Ammar Kalia: There’s an element of magic to radio being live and having to be in a specific area at the right time in order to tune in and record. The internet, however, democratises content in making it freely available. Do you miss that pre-internet magic of the live show and having an intimate relationship with your audience?
Adrian ‘Stretch’ Bartos: The whole way that music was discovered and shared back then wasn’t convenient, but I think the ritual that people had to go through imbued the music with a lot more meaning. Sharing taped recordings of our show with your friends or even buying records was a laborious process. Imagine being a hip-hop head in the UK in the ‘90s, you’d have to go to the record shop to get an indie release knowing that there might only be twenty copies and more than twenty people who wanted it. The whole experience and trial you’d have to go through to get that record, means you’ll probably keep it for the rest of your life. The same goes for how people had to stay up to listen to our show and potentially go to their friend’s house to get better reception. That whole ritual gave it meaning.

AK: You were responsible for breaking artists who went on to sell over 300 million records worldwide, but did you ever have an inkling of who might have longevity in the industry?
Stretch: For the most part we didn’t care, it wasn’t what we were focused on. There’s that clichéd mantra of ‘being present’ without thinking of the past or future, but doing the show truly kept us locked into the present. Our goal in making that show was to create the freshest mixtape filled with a lot of humour and incredible music for the next day; a combination of which you could only get if you were tuned in. We had the best time doing that show – Thursday night was a weekly thrill for me and Bob.

“When I got wind of Nas I wasn’t thinking that he’d be a commercial success, I just knew he’d be the dopest motherfucker out there.”

In terms of specific artists, when I got wind of Nas I wasn’t thinking that he’d be a commercial success, I just knew he’d be the dopest motherfucker out there. I’d say to Bobbito that he was Rakim 2.0, he was carrying that torch. There were certain other artists whose success was a bit of a surprise; I would not have guessed that Jay-Z would go on to be the one artist to emerge from New York City in the ‘90s as the king. Although, with Biggie not around it made it easier. Biggie just always exuded that appeal that was so obvious, whereas Jay-Z was like a fine wine that had to age a little. There were also other artists that we adored and thought were as good as anybody, like OC, who never really made it commercially. Our show was a meritocracy; it wasn’t about being commercial. By no means did it matter whether you were signed or a star in coming on the show. I played records based on what they sounded like and we invited artists up based on what they could do on a mic.

“Biggie just always exuded that appeal that was so obvious, whereas Jay-Z was like a fine wine that had to age a little.”

AK: Did you ever feel when you were starting out that being white held you back or made you hesitate in developing an authorial voice in the hip-hop community? Or were you spurred on to challenge stereotype?
Stretch: I certainly did feel that desire to challenge stereotype and people were often surprised to find out that I was white [laughs]. When they came to the studio they were expecting to see a Latino or black guy, but for the most part they just thought that was funny. The reception that we had from the show was so passionate and almost cultic, it didn’t matter that I wasn’t who people initially thought I’d be. The hip-hop community is actually very open and I wouldn’t say that I have paved the way, but I think I’ve certainly let white guys and girls realise that not only could they be in hip-hop and be white, but they could also be themselves. I was never that guy wearing tracksuits or putting on chains and talking like I was from the hood because that wasn’t me. I’m surprised that people ever even assumed I was black [laughs]. Honestly, I enjoyed my position of being a one of a kind for a while, it was exciting.

AK: WKCR, a university owned station, gave you huge amounts of license to showcase artists who would say and rap whatever they wanted on-air. Currently, though, there is heated debate over free speech in campuses and the notion of ‘safe spaces’. Do you have any thoughts on whether that kind of censorship should be imposed?
Stretch: I imagine that our show would be able to flourish and have free reign now as it did back then. Mainly because we were on in the middle of the night and the only people that were listening were the people who loved the show, offensive lyrics and all. It is amazing though that we were in New York City, such a highly regulated part of the world, and we were getting away with murder every week, all night long. I don’t know how that happened.

“It is amazing that we were in New York City, such a highly regulated part of the world, and we were getting away with murder every week, all night long… Free speech is messy and I’m proud of what we did.”

I think the free-flowing of ideas unconstrained by censorship is a good thing, certainly in our case in playing hip-hop music and giving a voice to people who might otherwise be silenced. Even though, sometimes they said very offensive things which I now, as a middle-aged man, maybe wouldn’t even play. But, free speech is messy and I’m proud of what we did.

AK: Freestyle was such an important element of your show. Do you feel that freestyling in hip-hop has now fallen foul in favour of hooks?
Stretch: Back when we did our show we were held up as everything that was right about hip-hop and that was in contrast to stations like Hot.97 who were playing music that was all about R&B hooks and gimmick records. Now the part of hip-hop culture which involves artists striving to be the best lyrically still goes on in the battle rap circuit but sadly it seems like no lyrical artist can puncture the mainstream bubble. I guess Kanye does once in a while and Jay-Z does once in a while too. But then I hear people praising Drake as if he’s lyrical and that’s astounding to me [laughs]. At the same time, though, you can be a successful artist now without even being on the radio, so does it even matter what Hot.97 is playing? A lyrical MC is probably not aspiring to be a pop artist, otherwise he’d be making records like [Desiigner’s] Panda.