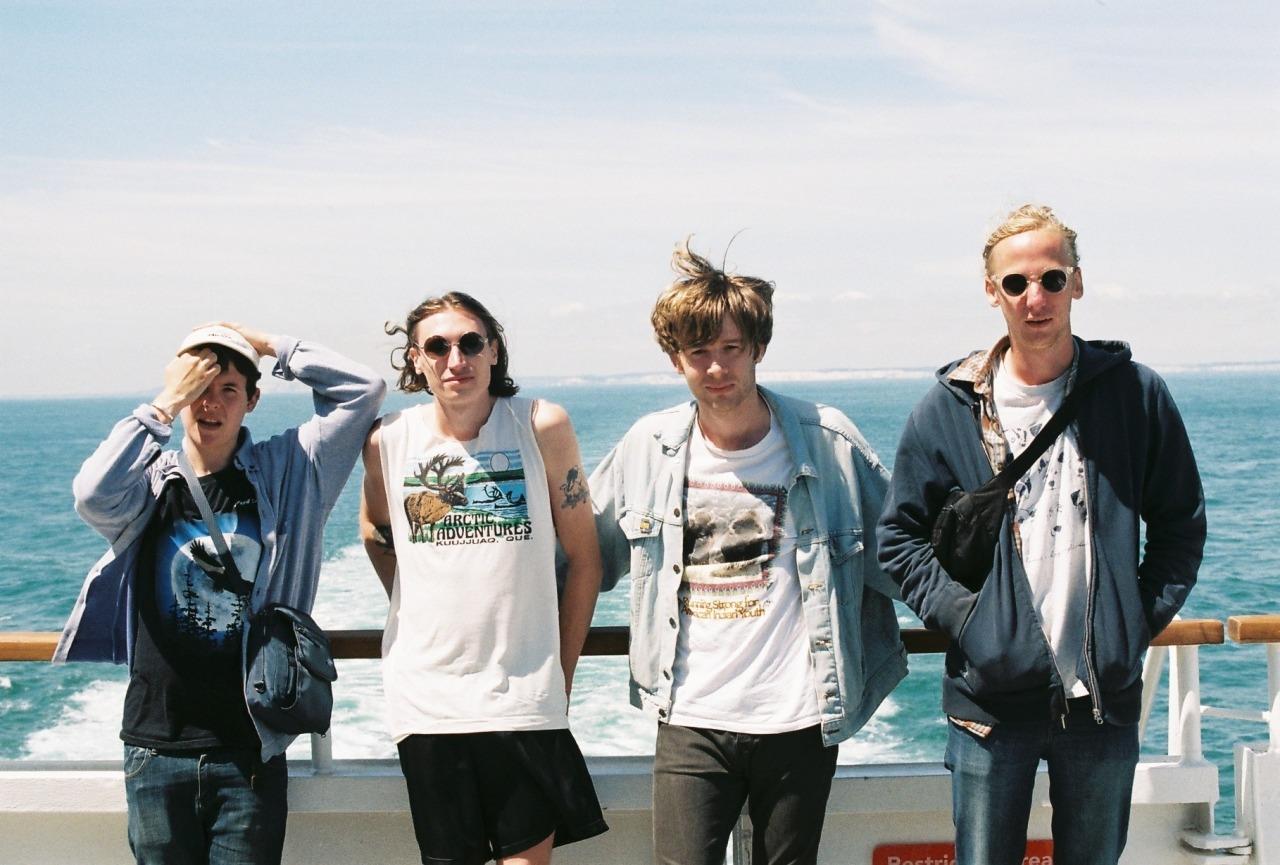 In the form of song titles on their debut LP, Hot. Reckless. Totally Insane, Sheffield quartet Best Friends have got some great advice for us, If you think too much your brain will fall out and Shred til you’re dead. We’ll happily oblige.

Individually the band breaks down into Lewis Sharman (guitar and vocals), Tom Roper (guitar), Ed Crisp (bass) and Jonny Gaymer (drums), having first met at uni around six years ago they became Best Friends (no apologies for the pun). With a shared love of SoCal lo-fi bands they swiftly found themselves metabolising their influences with ease.

Sharman’s vocals recall the snotty tone of slacker rock’s finest and while Gaymer’s drums are thoroughly bludgeoned, the band churn out some stellar melodic guitar riffs. Together they build a wall of grungy, surf rock that fizzes with an effervescent joie de vivre trapping you in a memory of summers past, nailing that balance between sophisticated yet lo-fi; it sounds carefully constructed yet on the verge of falling apart.

Best Friends keep good company, having put in time touring with the likes of Swim Deep and fellow Sheffielders Nai Harvest, they are now readying their debut record Hot. Reckless. Totally Insane (set for release in July) and it’s all muscle. An absolute shredder worthy of its awesomely ridiculous title, the LP packs one hell of an exuberant punch, vibrating with an intensity that never wavers.

Alex James Taylor: So tell me a bit about how you guys first got together…
Lewis Sharman: In a pretty boring way really, we just met at uni became friends and started the band.

AJT: Your debut album is set for release in July, it’s titled Hot. Reckless. Totally Insane, you’re setting expectations high with that title. What can we expect?
LS: Its a bittersweet coming of age tale with loads of other stuff going on, songs about eating toxic waste, feeling weird, the end of the world etc. There’s only one breakup song on the album and its not even that intense, which I think of a debut is something to be proud of.

AJT: You’re from Sheffield, right? I used to live nearby, there’s such a tight scene there, how’s it looking at the moment?
LS: Sheffield is really good as you can rent unused buildings for not much money. Every band has their own studio basically which makes things a million times easier. We recently built one with our friends in Avida Dollars, Radical Boy and Pet Rock called Delicious Clam Studios. Ed and Callum from AD are at the helm and have started recording bands then putting them out just like the good old days. From day one we were really surprised how much everybody helps each other out. Owen Adams from Mad Colours recorded our first EP on the basis that we promised to record another bands first EP one day and Nick Chantler from Seize the Chair and Liam Bardell recorded the Throwing Up EP just because they wanted to as well.

We’re still at the start of our journey, but we’re starting to be able to give something back now, which is really nice. As far as I’m concerned its all about trying to bring your friends, and those who have helped you, along for the ride. A city like Sheffield gives you a lot of freedom as a band. I can’t even imagine how you’d function as a band in London, doing anything costs you loads, getting a drum kit to a venue on the tube? Get out of here!

AJT: You’ve just finished your UK tour with Nai Harvest, how’s it been?
LS: It was the best. We both started out roughly at the same time, and Lew [Nai Harvest, drummer] lives with us so we’ve always been close. Its something that we’ve always wanted to do but I suppose we were in slightly different scenes. Its seems we’ve met in the middle now though which is really cool. Turned out I didn’t need to be at all but I was a bit scared everybody might not like us as we’ve played punk scene shows before and people have hated us pretty bad. I’ve never understood that as we play garage derived music, which to me is pretty close to actual punk of the 70s. It’s just a word I guess. The punk scene and the ‘indie’ scene have seemed separate to me but I’ve never understood why as we’re all in the same shit together doing it our own way. We can all get along right? I think whether anyone is conscious of it or not Nai are bringing the two scenes closer with their new record which is really cool, as it takes parts from both sides. Obviously that’s gonna piss some people off but if you don’t have a positive and inclusive attitude it’s no loss to anyone.

The shows were really great and obviously being on tour with a load of long time friends is always gonna be super fun. Shoutout CK Brown, Ben at Snoar and Steve for keeping us safe. If you want a good story I looked out of the kitchen window of the house we were staying the morning after the Brighton show to see Jonny asleep on a second story roof, recovering from climbing scaffolding to the top of a church tower. Everyone had a night a bit like that where something pretty stupid happened, but that was by far the most dangerous.

AJT:You finished in Sheffield at The Harley, was that your favourite gig, a big homecoming?
LS: Sheffield got really crazy and was super super fun, but it made me a bit sad as I knew it was over. I think my favourite was Manchester, something about it just felt really good.

AJT: You’ve played a lot of shows since your first in 2011. Do you have a favourite memory from any of your gigs?
LS: Last year we played a little festival in the south of France in Toulon. The stage looked out to sea and we played as the sun was setting, a red sky with the French Navy in the port. I remember looking out just thinking it was so stupid that some songs we wrote together got us there.

AJT: And what’s the best gig you’ve been to?
LS: I went to Primavera festival in Barcelona last year and I can honestly say I have never had a better time in all of my life. Walking into the festival next to the sea with the sun shining, while Real Estate play on the main stage was pretty incredible.

AJT: What’s your tour bus/car/wagon look like inside?
LS: We spend the majority of the time in my Peugeot 306 ‘D-TURBO’, that’s right, TURBO. They used to say when the ashtray’s full buy a new car but thats never been a concern. Touring in a car does destroy it though, Ed had a car we used a lot too until the engine gave up, mine was immaculate but now it’s a wreck. Never broken down going to a show though, even when Ed’s car caught fire and we had to break out the extinguisher we still made the show. Thats real DIY, we just put out the fire, carried on driving. No fire brigade required. Hopefully we can start getting in vans a bit more and not having to drive ourselves, that’s living the dream.

AJT: Coming up to festival season you guys are doing tramlines this year, looking forward to that?  Joining Wu-Tang on stage for a collaboration?
LS: Yeah Tramlines is always really fun, definitely gonna be pouring some out for ODB. We’re playing on Saturday on Dev green I think. We’re coming to a town near you on a venue tour in July too for our album release, come and see us.

AJT: Your cover art is always really cool, who does the art for those?
LS: It is the one and only Lew Currie from Nai Harvest. We always end up having to ask him to do things super last minute and he smashes it. He’s got a book out on Snoar Press actually right now, people should buy it and support him, for the love of art.

AJT: Your press release claims that you are armed with a encyclopaedic knowledge of WWF.  Is this wrestling or the World Wildlife Federation?
Lewis: Personally I probably know more about wild life, was pretty into animal hospital back in the day. I’m pretty entry level on the wrestling, my dad used to try and stop me and my brother watching it as I used to try and perfect the peoples elbow on him. I’m probably more Triple H era where as Tom goes way further back. Jack our old drummer who left to travel the world was the real expert.

AJT: Have you got wrestler names?
LS: For the Dude Love video I was the national back

AJT: If you could wrestle any other band who would it be?
LS: Slipknot we’re calling you out, bring it if you dare!