Nicolas Bourriaud is the Director of the École Nationale Supérieure des Beaux-arts, an art school in Paris. He co-founded, and from 1999 to 2006 was co-director of Palais de Tokyo (Paris), a major centre for modern and contemporary art, and is widely known in the context of relational aesthetics, a tendency in fine art practice he brought to attention in the 1990s.

We have irreversibly altered the atmosphere, brought about the extinction of species, and, as a result, have propelled ourselves into a new geological epoch: the Anthropocene. The dawning of this new ‘Human Age’ announces the arrival of a moment where nature and culture have become irreversibly entangled: humans are becoming a geological force, the earth is becoming man-made. With ‘The Great Acceleration’, the ninth iteration of the Taipei Biennial, curator Nicolas Bourriaud presents an international group of fifty-one artists whose diverse practices navigate this new world order, inventing pathways and exploring new states of matter and new forms of relations.

Bourriaud’s analysis is posed through an expansion of his famed theory of relational aesthetics, first introduced in the 90s, “to include our relationships with machines, animals, plants or rocks.” This recalibration of relational aesthetics incorporates a critical response to the present philosophical trend of speculative realism, loosely defined by its stance against philosophies that privilege the human over other entities. Bourriaud acknowledges that this mode of thought, which maintains that objects exist independently of human perception, lends itself to the possibility of developing a renewed relationship with our environment.

But as Bourriaud puts it in our interview, “What is an exhibition deprived of human consciousness? A tree falling in the forest without anyone to look at it?”

Speculative realism turns on a fundamental critique of anthropocentrism, a criticism that has many times been directed at relational aesthetics. However, Bourriaud’s updated theory continues to push against radical anti-anthropocentrism, in part, through his assertion of the paradox of the Anthropocene: as the collective dominance of our species grows it infects the individual with a feeling of impotence. This sense of futility can be linked to what Bourriaud describes as a “collapse of the ‘human scale’” – a persistent dehumanisation made manifest by the very infrastructure that our species has created. Confronted with a massive apparatus that transforms nature into an object of speculation and breathing bodies into data easily consumed by an increasingly computerised global economy, Bourriaud makes a plea for the rehumanisation of the spaces from which the human has been evacuated.

Art presents the possibility of moving against and outside of prescribed patterns of living. The artist is the creator of nomadic constructions, precarious forms that fracture opaque presentations of reality and engender random collisions that provoke new ways of thinking and seeing. As HERO Young Art Week comes to a close and the arrival of the Anthropocene becomes increasingly real, Bourriaud reflects on his most recent project as curator of the Taipei Biennial and offers his perspective on the climate that young contemporary artists are working within and around. 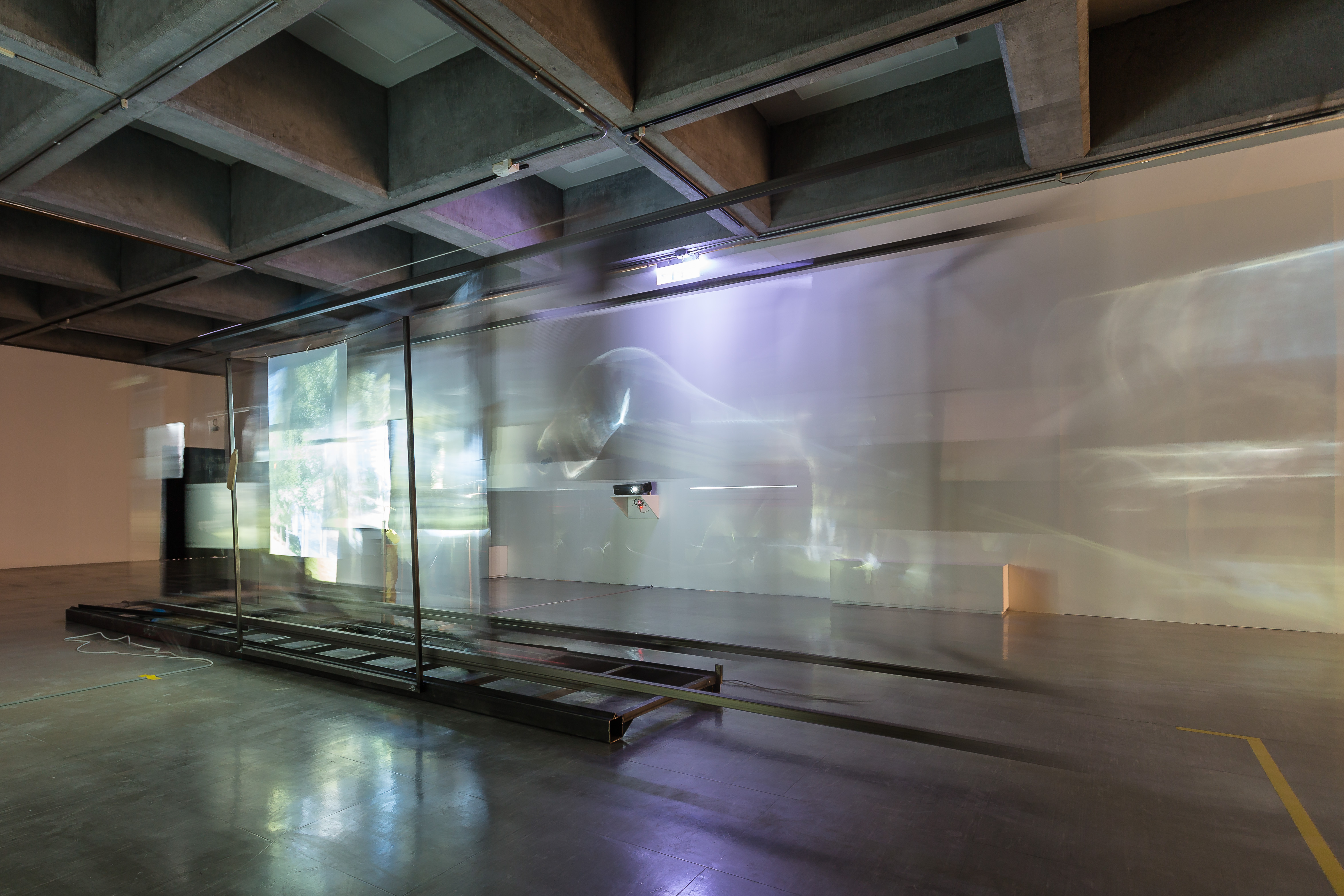 Lina Kavaliunas: How did everything start? How did you develop the concept for the Taipei Biennial and what was the process by which it was realised?
Nicolas Bourriaud: The first spark was an article I read, saying that there were more robots than human beings roaming the internet today. It reminded me of our excitement about the web in the mid-nineties, which had a lot to do with the art practices I commentated on in my book Relational Aesthetics. Also, the current trend of “speculative realism” in philosophy, focusing on the object against the so-called hegemony of human beings, caught my attention because it corresponds to an unprecedented movement of reification: everything tends to become a product, including people and natural elements. The question was: how do contemporary artists respond to this situation?

LK: How does the spatial organisation of the exhibition, its material form, reflect the curatorial concept that engendered it?
NB: After thinking about the exhibition as an ideal display, one has to confront the physical reality of the venue. Taipei’s Fine Arts Museum is a late-modernist building, and its three floors are circular, constituted of rooms with variable dimensions. I developed “sequences,” starting with a kind of prologue in the lobby (Opavivará!’s Formosa Decelerator, then on the flanks, the production lines by Po-Chih Huang and Hung-Chih Peng), which leads to a very mineral, almost prehistoric landscape including the sculptures of Camille Henrot, [Tetsumi] Kudo, paintings by Sterling Ruby, the installation of Haegue Yang, till the rough and dusty sculptures of Peter Buggenhout which are confronted by a series of Peter Stämpfli’s paintings from the 1970s – which look, in this context, like prehistoric idols. The exhibition functions by sequences: human/animal, human/machines, etc… 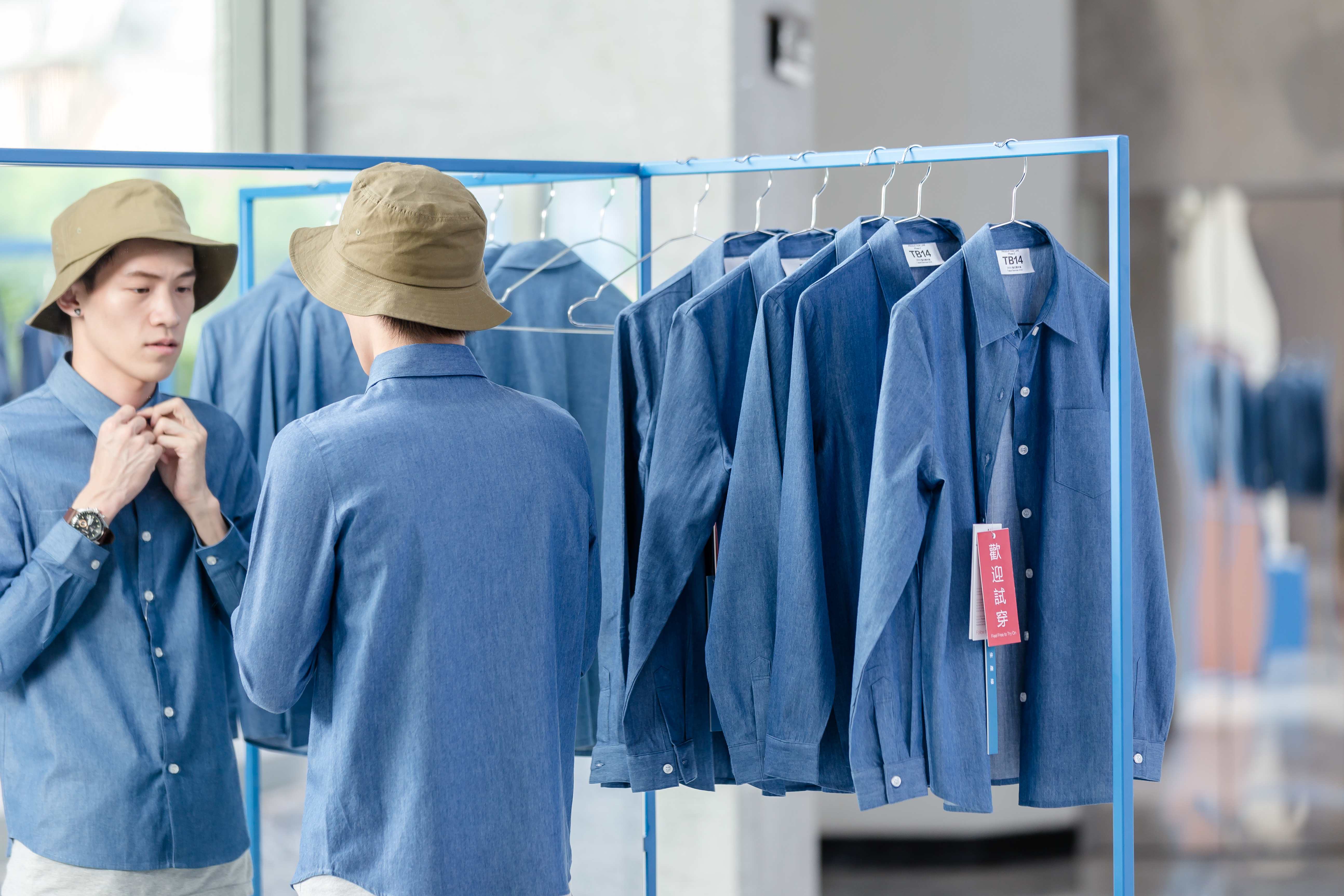 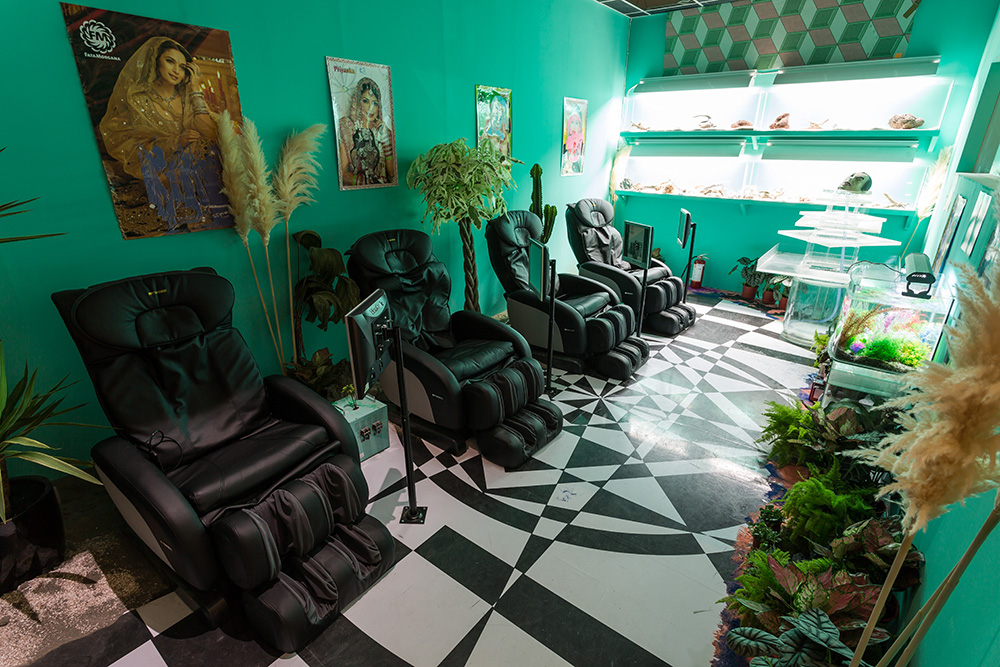 LK: How does the Biennial’s topic expand on your theory of relational aesthetics?
NB: It expands Relational Aesthetics to include our relationships with machines, animals, plants or rocks. Only think that this text was written before we had smartphones, before web 2.0… It seems impossible not to rethink those topics within our new technological and mental landscape. After all, relational art has been recently criticized for being “too anthropocentric”… but what is an exhibition deprived of human consciousness? A tree falling in the forest without anyone to look at it? Anthropocene marks the domination of humanity as a species, as a technostructure too, but it goes along with our individual feeling of impotence. Relational Aesthetics was a plea for the extension of human presence within the realm of objects.

LK: In Chaosmosis, Félix Guattari asks, “How do you make a class operate like a work of art?” How has your curatorial practice informed your role as Director of the École Nationale Supérieure des Beaux-Arts and, conversely, how has your time at the Beaux-Arts influenced your work as a curator? Does Guattari’s question resonate with your approach to arts education?
NB: Of course, it does. I really believe that the best way to transmit art is to be directly confronted with artists and artworks. I am not teaching anymore, but I try to bring those issues into the Beaux-Arts de Paris, launch new programs and multiply the possible encounters for the students. My role consists in facilitating initiatives and implementing a diversity of points of views. 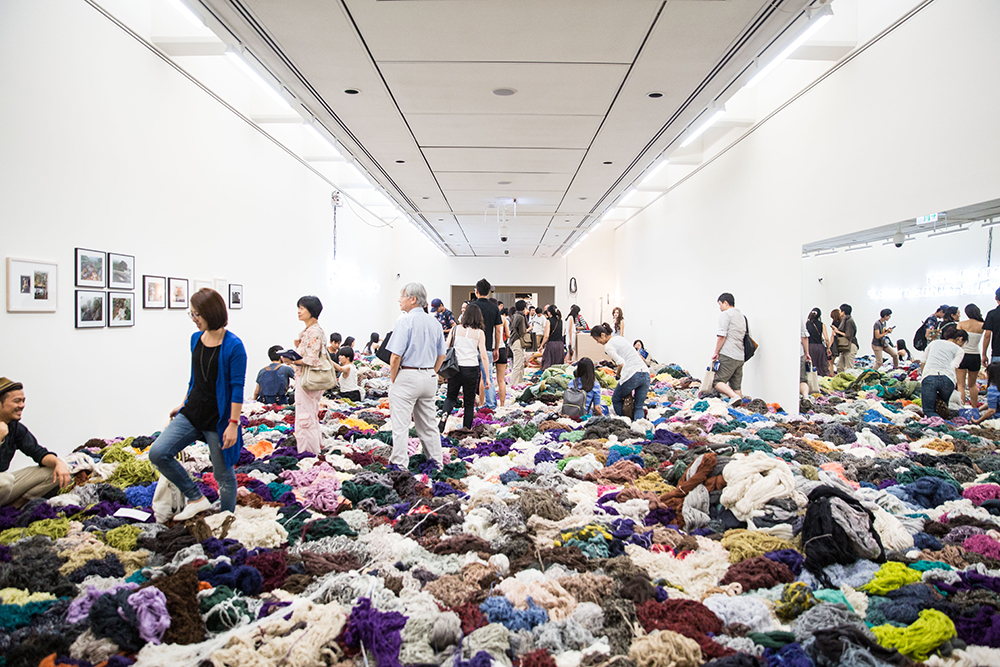 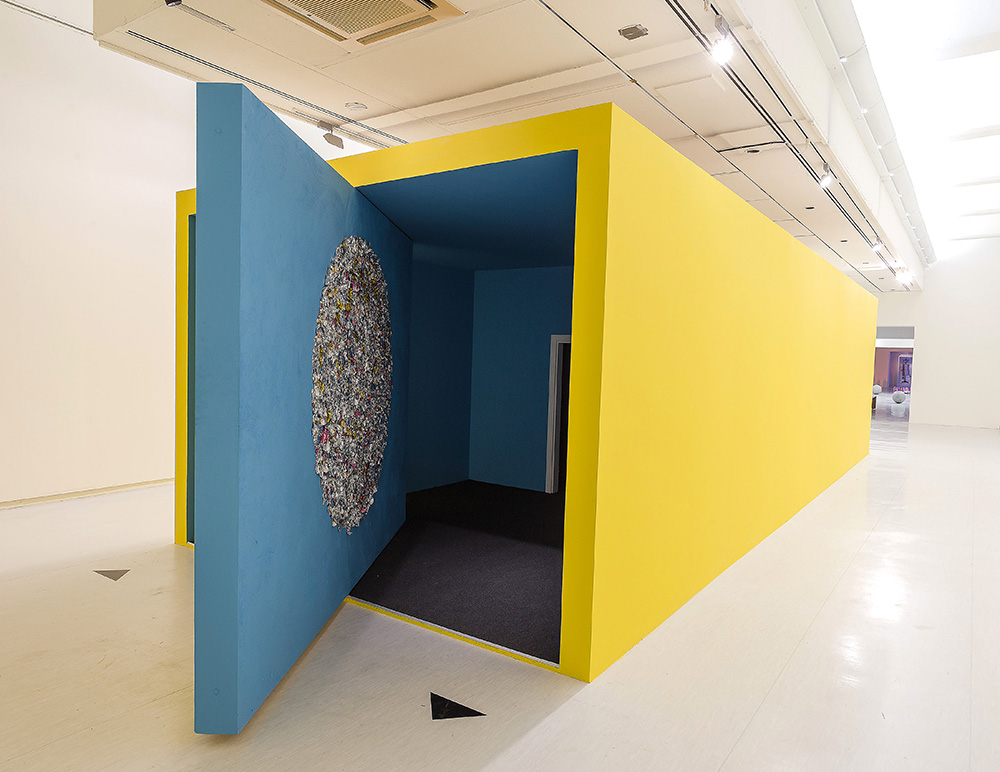 LK: What issues are being raised by young artists today? What challenges are being faced and how are they being negotiated, surmounted?
NB: I tend to think that many young artists are developing problematics which are close to ‘The Great Acceleration’: our relations with the technological sphere, with nature, with objects surrounding us and the political or social contents they contain.

More generally, a young artist has to ask him or herself how a painted surface or a combination of objects can resist the process of reification. How can they produce an object that goes against the destiny of objects? Then, there is no alternative: either you confront yourself with history, or with the market.

LK: How has the internet and, more broadly, the digitisation of culture influenced the work being produced by young artists today?
NB: In everything. No artist can ignore it, but you can either negate it, or use it. Nowadays, painting is a major interface between the screen culture and the history of representation. Cut and paste, pop-ups or even navigation are tools used by painters. 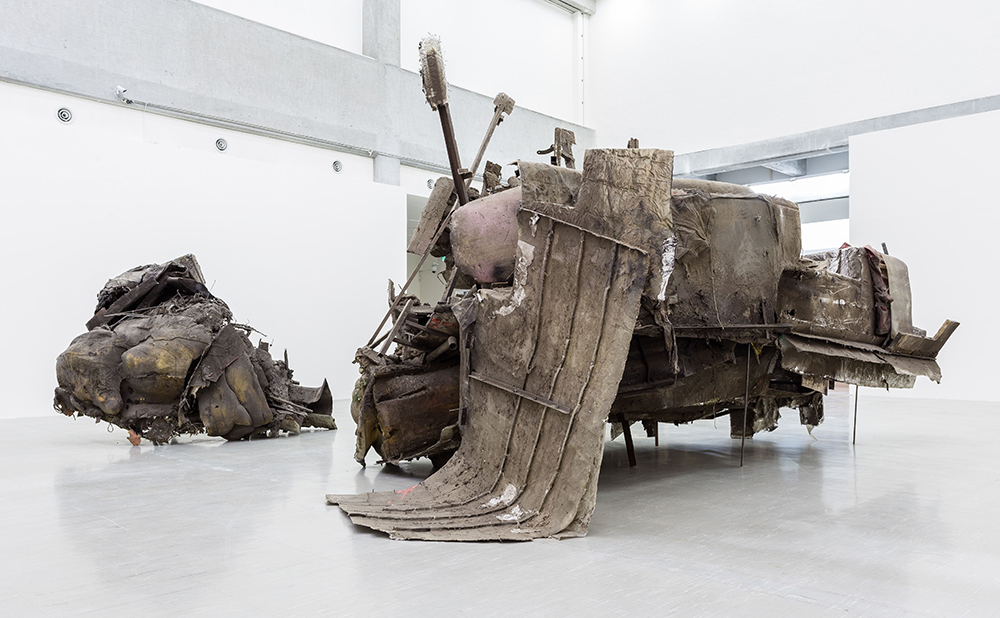 LK: How has the relationship between geography and contemporary art shifted in response to the advent of globalisation and technological advancement?
NB: The situation has been inverted since 1990. Today, an artist (and all of us, in fact) starts from a globalised state of culture; and then, one can dig to explore more specific issues, local forms of culture.

LK: The exhibition seeks to explore the ways that contemporary art expresses a new contract among human beings, animals, plants, machines, products and objects, which brings to mind various works of science fiction and thoughts of utopias and dystopias. How are artists engaging with these concepts? What is the form of contemporary utopian thought?
NB: In Relational Aesthetics I developed the notion of micro-utopia, proximity-based utopias. ‘The Great Acceleration’ displays a lot of artworks engaging in utopian relationships with different spheres, but always touching base with human community. The necessity of a renewed contract with our environment is obvious: artists lead the way by introducing new patterns, new behaviors. Actually, the Taipei Biennial 2014 could be summed up by a very contemporary slogan: occupy nature, occupy technology, occupy the world. Everywhere, humans lose ground against technostructure and the algorithms of profit.