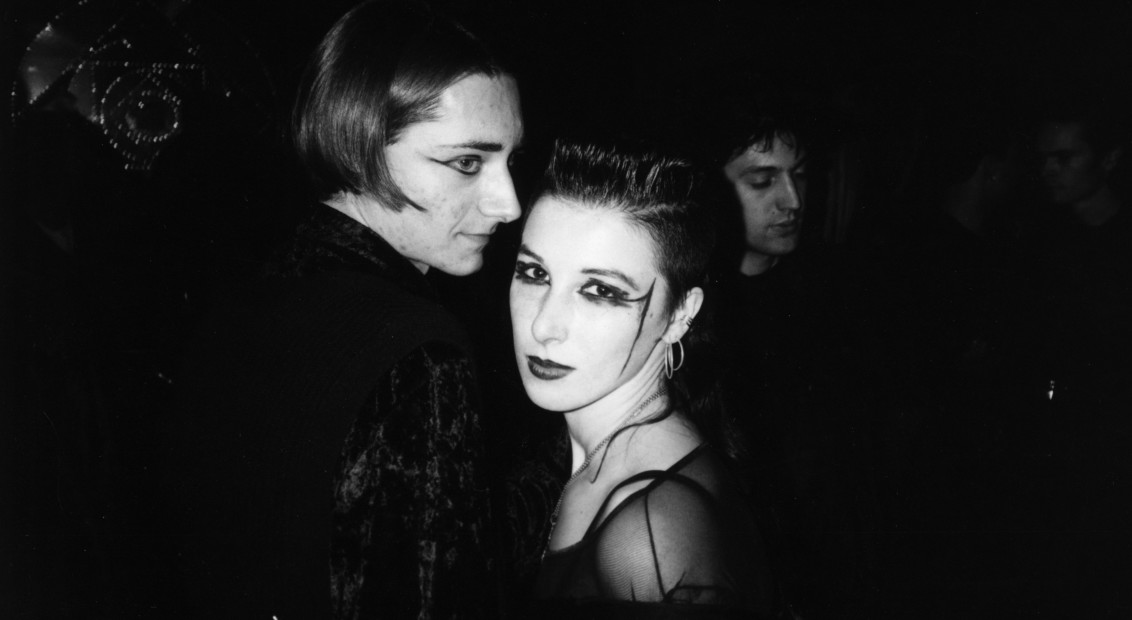 During the 90s and early 00s, in seemingly sleepy, historic, catholic Italian cities such as Modena and Florence, something dark was bubbling beneath the service. Inside underground clubs and venues, young people gathered outfitted in black, latex and chains to release their inner dark side within the rawest of sounds. Happening in parallel to the goth and darkwave scenes surging across Europe, in Italy their unique take on this subculture was dubbed the ‘Dark’ scene.

For its latest volume titled Dark Youth, Ragazzi di Strada – the editorial series focusing on Italian subculture – hones in on this particular cultural movement, distinguished by its brooding energy and a community that empowered individualism as much as the tribalism of belonging to a clique. Building on London’s Batcave originals – the likes of Robert Smith, Nick Cave and Siouxsie Sioux – Italy’s Dark scene pushed further, evolving and cross-pollinating by fusing influences from philosophy, folk and EDM to create new sounds and genres.

Inside Dark Youth, Ragazzi di Strada’s founder and curator Lorenzo Ottone presents this movement through the eyes and words of Dark scene member Albert Hofer, who chased the subculture across Italy and, later, internationally, documenting it all on film. Here, we hear from both Ottone and Hofer as they unpick the intricacies at the black heart of the Dark scene. 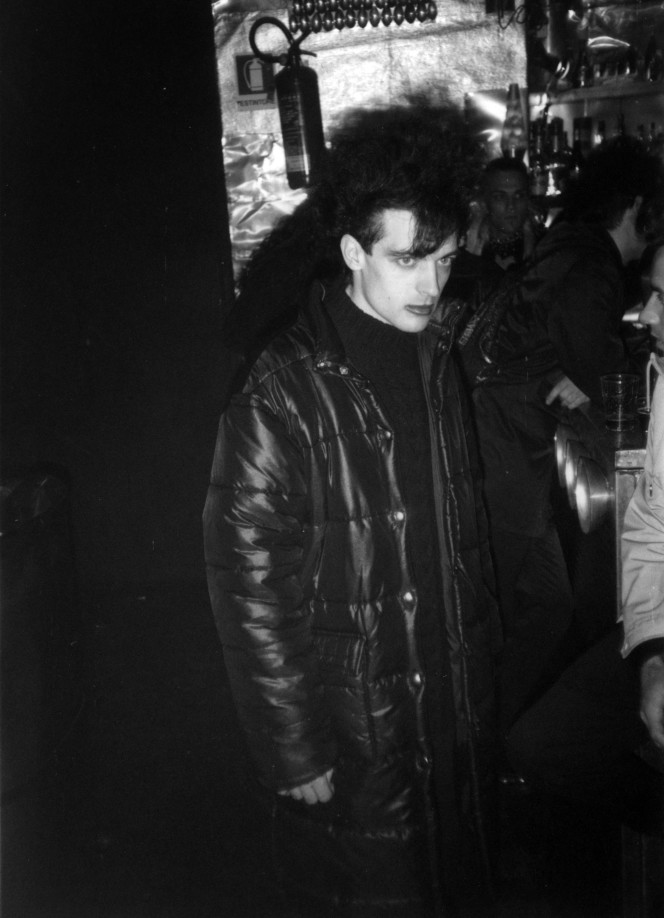 On how Italy’s Dark scene evolved and its identity…
Albert Hofer: I encountered the dark scene rather late, in the middle of the 90s. This is a subculture that has to be dated over a decade before, originating in the 80s. Mine is nothing but a personal history crossing paths with an already highly developed subculture.

Creature Simili by Tosoni & Zuccalà – an excellent publication on the complete history of this subculture – rightly underlines how “dark” is a definition that is used exclusively on Italian soil to refer to what is internationally called ‘goth’. I insisted with Lorenzo on adopting this term, the one both me and my friends employed to define the universe I was briefly a part of.

Within a year of starting to have an active role in this subculture in Florence – at the age of seventeen – I began travelling regularly to Modena, where Condor, possibly the most important goth club at the time, was based. Curiously, this did not happen in a big metropolis, but in a much smaller city. Shortly after, I ended up on a constant travelling spree which brought me to concerts and club nights throughout the centre and the north of Italy. I discovered the scenes of Padova, Pordenone, Turin, Milan… just for a few hours through a night, before returning to Florence by train. The path from this to travelling international was quicker than I ever thought.

“The Dark scene – especially in its Cyber side – seemed to give an answer to the anxiety that permeated the youth before the millennium.”

On how Italy’s scene differentiated from the rest of Europe…
AH: Simplifying the diverse interpretations of this subculture, I’ll point towards some of the essential declinations of the genre. First and foremost, it included a very rock-oriented part: fans of seminal international bands such as Joy Division, Bauhaus, Sisters of Mercy, Siouxsie and the Banshees, The Cure, orbiting close to an Italian ‘alternative’ rock scene of the same Epoque, which offered valuable bands such as CSI, Massimo Volume, Disciplinatha, Marlene Kuntz.

People within this scene may adopt elements of a dark look, such as subtle make-up, black clothes, or have a sober image. Next to them, you would find the followers of the more goth-oriented side of music, a relevant majority in certain cities, a more proportioned sub-subculture in others. Those were – curiously – defined as goths, incarnating a part of a wider subculture that, on Italian soil, appeared to have its own peculiar definition, more specific than the international term. Bands like Rosetta Stone, Gardens of Delights, Fields of the Nephilim, Christian Death, The Mission, Faith and The Muse, London After Midnight are among those I associate with this sound as heard in club nights at the time.

The fans and bands constituting the neo-folk element of the dark subculture were philosophically a slightly different incarnation of the movement. The themes of the songs were generally esoteric or historical, openly nostalgic and critically positioned against the modern world. These bands and their fans tended to have a stronger political identity compared to those previously described.

Its apocalyptic folk, atmosphere paired with spiritual themes and references to pagan culture. Bands such as Death in June, Current 93, Sol Invictus were the most famous international interpreters of the genre at the time and had devoted fans in Italy. While the excellent Italian band Spiritual Front inherited and evolved elements of the genre towards the end of the millennium.

Labels such as Cold Meat Industry pushed further, into an interesting mix of industrial, neo-folk, and electronic music that opened up another sub-genre labelled as dark ambient. The electronic element of dark is actually a great protagonist of its declinations. From EDM to industrial and cyber, there were several different styles that melted elements of dark culture with those of electronic music 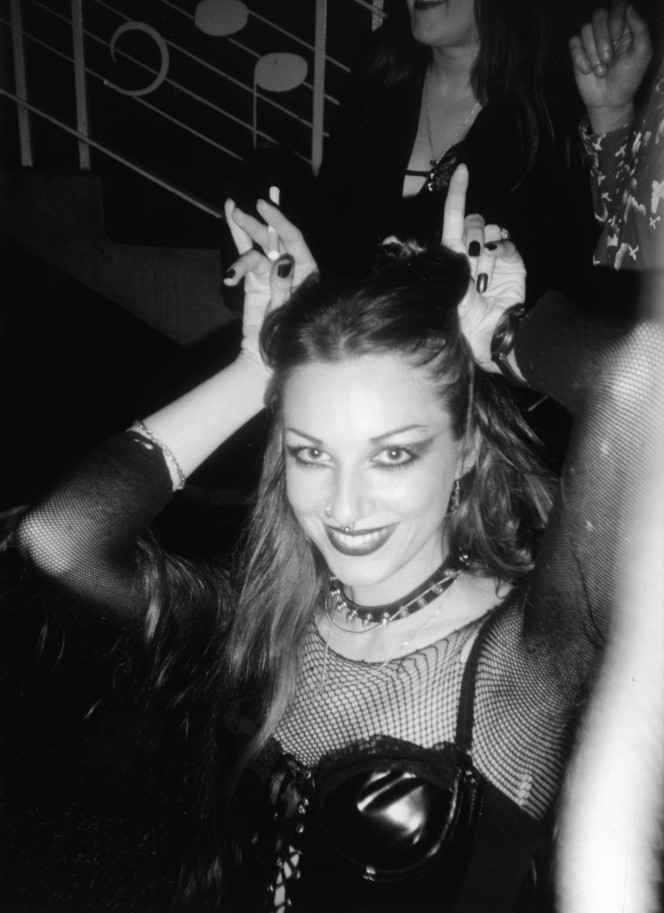 On how Lorenzo found Albert Hofer’s work…
Lorenzo Ottone: I met Albert through common friends. As it often happens, I discovered some of his photographs via social media and then decided to carry on the research physically, meeting with him in Milan and going through his many photo albums. Our shared love for print publications and archives led Albert to immediately embrace the ethos of the Ragazzi di Strada project and my idea of putting his photographs together. The fact he took these photographs for personal documentary purposes and carefully stored them for over twenty years with the dedication of an archivist contributed to a coherent publication rich in content. When you work with retro material it is not common to be this spoilt – actually having to leave some material out of the final edit.

With Dark Youth we decided to let aesthetics and geography shape our work, by selecting photographs shot in black and white and documenting Albert’s Italian years, before he moved to London where he remained a member of the city’s Cybergoth scene. The black and white imagery is evocative of the spirit of the Dark scene, however it also generates a unique contrast with the joy and energy that bursts from the photos – traits you wouldn’t necessarily associate with Cyber and Goth culture.

On the Dark scene’s wider influence…
LO: I think the legacy left by the Dark scene is now more visible than ever. Despite revivalist phenomena’s tend to wash out the original essence of a subculture mostly to maintain aesthetic elements – especially in post-modern society – we should not forget that all original subcultures represented clusters for youth to get together and express their ideas and rebellious urges by playing with music and fashion. The Dark scene – especially in its Cyber side – seemed to give an answer to the anxiety that permeated the youth before the millennium, when both the excitement and fear for ‘Y2K’ was tangible. I think that now, with all the physical separation and mental alienation brought in by social media and tragically increased by Covid-19, a new generation of teenagers are facing the same feeling of social and cultural dystopia their pals were experiencing in the mid-to-late 1990s and early 2000s. It looks like the society Cybergoth predicted 20 to 25 years ago is now actually taking place. As a consequence, it is no surprise that both themes and aesthetics that belonged to the original Dark scene have made a massive comeback in contemporary underground culture, from clothes to music, flyer design and now also through memes. The beauty of Albert’s photographs is that, although shot 25 years ago, they are universal and still highly relevant in capturing the feelings that move young rebels. Overall, this spirit perfectly encapsulates the aim of Ragazzi di Strada, which is that of creating a bridge between physical memories and digital communication – to introduce new generations to forgotten stories of Italian subcultures.