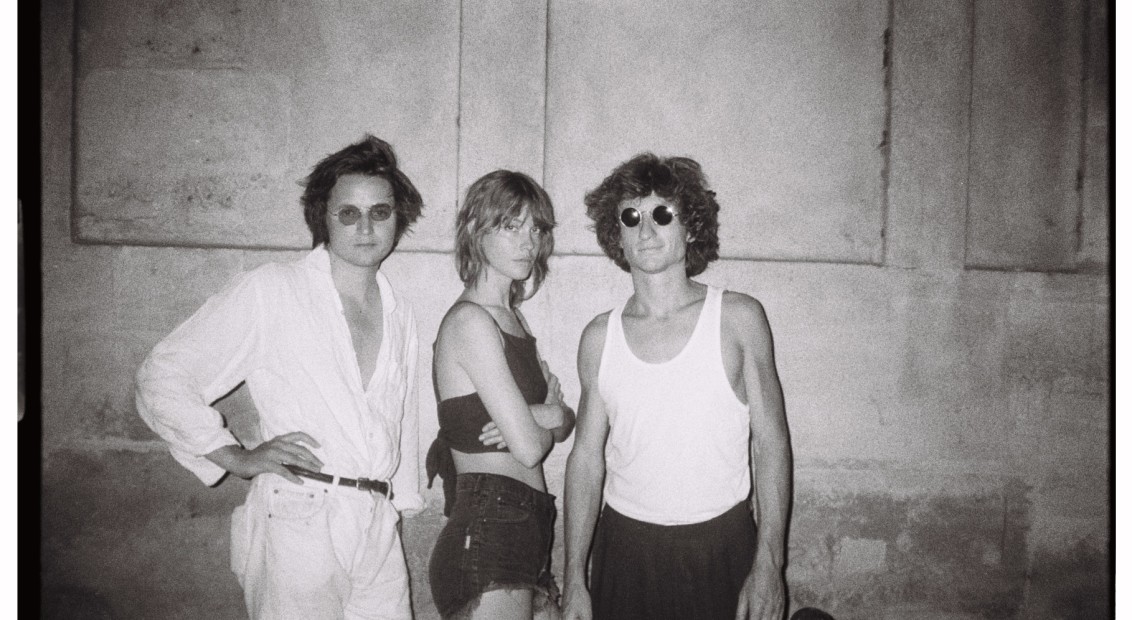 Recorded during France’s strict lockdown, Oracle Sisters’ previous EP Paris I (2020) and upcoming sequel Paris II explore their home of Paris as a city at a pivotal crossroads: will society move towards a utopic or dystopic future? Echoing a similar sentiment experienced by many as the world veers towards an uncertain reality. “After the whole confinement thing, I think everybody wanted to have some sense of upliftment – taking back your freedom. The second EP has something uplifting but you can still feel there’s that darker aspect also present,” Julia shares below. While Paris I explored a more utopian vision, Paris II takes us to a darker possibility of dystopia.

An ode to the city that brought the trio together, the trio found each other through their shared artistic interests and Paris’ unique way of guiding serendipitous meetings. “Julia is from Finland. I’m half American/half Danish, Chris is from Northern Ireland, so we’re kind of all over the place,” Lewis reveals of their global roots. Traversing borders, the trio (Lewis Lazar, Christopher Willatt, Julia Johansen) formed Oracle Sisters in Paris, their vision inspired by a blend of influences from art and cinema to philosophy and mythology. Across five tracks exploring themes of love, mysticism and spirituality, Paris II unfurls like a daydream – the EP serving as a roadmap through tapestries of sound including rock, psychedelia, and folk, telling the story of a world not quite recognisable as our own. 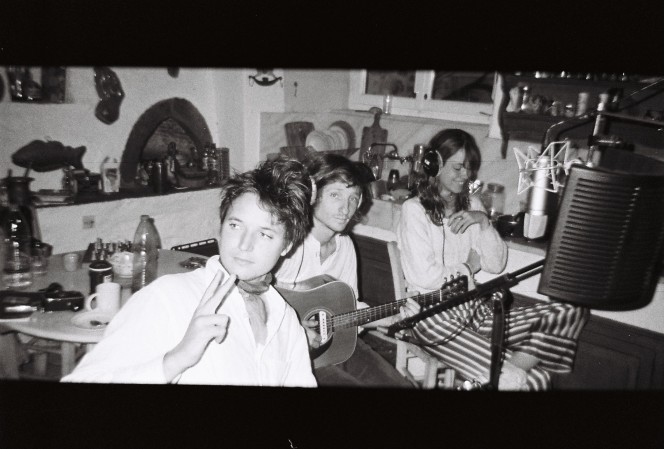 J.L. Sirisuk: You all come from different places around the world, how did the stars bring you together?
Julia Johansen: I met Lewis in Paris at a book signing of Chilean movie director and tarot reader Alejandro Jodorowsky through common friends. I’d heard of Lewis through friends, this Danish guy who is a musician, and then we met. Did we speak Danish together? I can’t remember.
Lewis Lazar: I think we both realised we speak Danish and got along. We met that night and I knew you were singing and writing music, but I didn’t know your talent for the drums.
JJ: Me neither.
LL: Me and Chris [Willatt] had moved to Paris a year before starting work with Julia. We knew a friend who was opening a cabaret so that was our excuse to move to Paris. We grew up playing music together and were apart for some years. When I was in New York, he was in Scotland and every time we got together there was this great chemistry of writing. It was very frustrating not to be able to see that through, which is why we reached the crossroads in our lives and moved to Paris to work together, to figure it out from there and start a project. We’d been writing for about a year before we met Julia.

JLS: Let’s talk about Paris I and Paris II. I love the idea of going to utopia or dystopia. In what ways did you approach the recording of Paris II differently than the first EP?
LL: The EP was recorded after the confinement in France. They were very strict about confinement through March and April. We were all a bit isolated in our own areas and the idea of Paris I was this kind of utopic world and spirit that we wanted to convey, and it had already become slightly dystopic with the way the lockdown happened, how strict the police were. I was given a fine for walking in the forest one day or I was given a fine because I bought beers and that wasn’t seen as essential. We were all in our own places being locked down and writing and doing whatever we could so when we came out of that, we had some songs we had written individually. Coming back together, we had that spark again where we wrote some new songs. I feel like some of the spirit of that vibe in early March and April, the beginning of the lockdown, came through a song like The Dandelion. There’s an atmosphere from the last year and from the confinement and there are songs that translate from that experience. We brought a bit of that into the album and we wanted to convey a more live, raw feeling in the recordings as much as possible.

“There’s an atmosphere from the last year and from the confinement and there are songs that translate from that experience.”

JLS: You live in Paris and the narrative of the EPs are set there. What makes it such a seductive place for you to create?
JJ: Anything can happen in Paris. Anything unexpected. There’s a really artistic feel here and there are all sorts of artists that are in their cocoons preparing their art, then you meet them one evening when you don’t plan anything. It’s like a melting pot of artists and I feel it’s not as competitive as London or New York. There’s a different vibe. People enjoy taking their time.
LL: That’s true. I lived in New York and there was always this atmosphere between artists like, “Who are you and what do you do?” A little bit like that. I got to know a really great community of artists, but the culture in Paris is very much embraced from a certain lifestyle. I think the French have this love of quality that shows. I’m not saying that others don’t, but they have this pride about taking their time – whether it’s in clothing or couture or the way they prepare food or their croissants, there’s this particular pride about detail and I feel that comes through with the artists as well. Everyone’s encouraging and helping each other. I think the names Paris I and Paris II are also a bit of a thank you to the city that we were born out of.

JLS: Can you tell me more about that narrative?
LL: Paris I and Paris II were also inspired by these pictures of the Paris World Fair of 1900. I saw where the Eiffel Tower was built for the World Fair, and other countries came and built pavilions and buildings. It completely changed the landscape of Paris, so the idea was to imagine Paris to be reinvented as a different place for the future and also thinking about humanity at a crossroads and where we’re going.

JLS: I was quite taken by the cover art for Paris II with the kids climbing up the ladder. Why did you decide to work with Ugo Bienvenu?
LL: When we were starting the band, I found his work on Instagram and wrote to him a year before, he didn’t actually see my message originally. I’m a big fan of [Hayao] Miyazaki and I find he’s like the French Miyazaki. It came time for our EP to come out and I nudged him again and he finally saw the message. He’s very much an artist who does exactly what he wants, so I gave him my concept of the two EPs and he went from there. I told him I wanted it to be this alternate utopic vision and that’s how he translated it. He said, “Okay. Send me pictures of you guys as kids and I’m gonna do my thing.” You just have to respect that. At the end of the day we were really happy with what he came back with because it captures something about the band – this sort of innocence and a desire to dream.
JJ: It made me feel very nostalgic seeing that photo and I thought everything was perfect. The colours, the characters – Lewis as this sort of leading superhero, taking us all up and me and Chris looking around and following him. It convinced me that I’ve known them since I was a kid or for a long time. I felt very nostalgic and uplifting seeing that photo.

JLS: What are some of your broader visual reference points or inspirations?
LL: We normally want to do something that’s sort of a condensed film or visual poem. We like the result of 8mm and 16mm film. Some of the videos we’ve made into real adventure movies. The first video we did, for the track Always, we all went to Finland, Julia’s home country, and we went on a road trip for a week which led us to getting into a small 1930s seaplane and we developed this story about a fake tour in Finland. 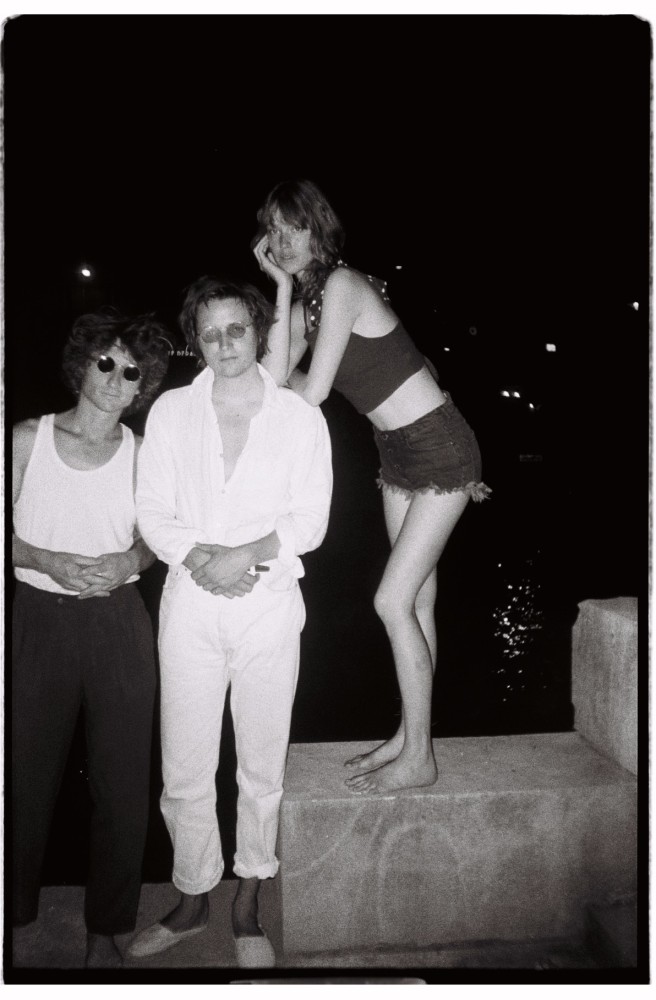 “We wanted to record the songs fast and not overthink things to get the beauty and the directness to come through as quickly as possible.”

JL: Are there certain types of sound that you were really hoping to showcase on Paris II?
LL: On The Dandelion – that’s a song Chris had quickly come up with the chords and the melody, and I did all the piano – he’d been listening to a lot of Chet Baker at the time, so I draw that slow delivery into what I think he was trying to get through with that. In terms of evolving our sound, we introduced the piano as a new element in our music. We wanted to record the songs fast and not overthink things to get the beauty and the directness to come through as quickly as possible. It’s more honest in that sense, less produced but more alive.

JL: I know you were recently recording in Greece, which makes me think of mysticism and mythology. What’s your relationship to astrology and mysticism?
JJ: I think astrology is definitely an interest of both me and Lewis, maybe not Chris – he’s more into math. And there’s a great interest in mysticism. Music in itself is like a spiritual path somehow. It’s really fun to analyse people that we meet and Asc. Scorpios came around because we had seven friends in our close group of friends who are ascending Scorpios, including me and Chris and so then this song came about.
LL: There’s a lot of it around us. One of our best friends in Paris is an astrologer, so she’ll always tell us why things aren’t working or why things are working at a particular time. Julia’s boyfriend reads tarot cards so he’ll give us a reading to tell us what’s up. When you talk about mythology and Greece, it’s something I’m fascinated by. Mythology is the root of storytelling and as an artist or as a musician, you’re not reinventing the wheel. The stories come out of this essence of human dynamic that exists almost as a pattern throughout the ages and we kind of springboard off that essence.