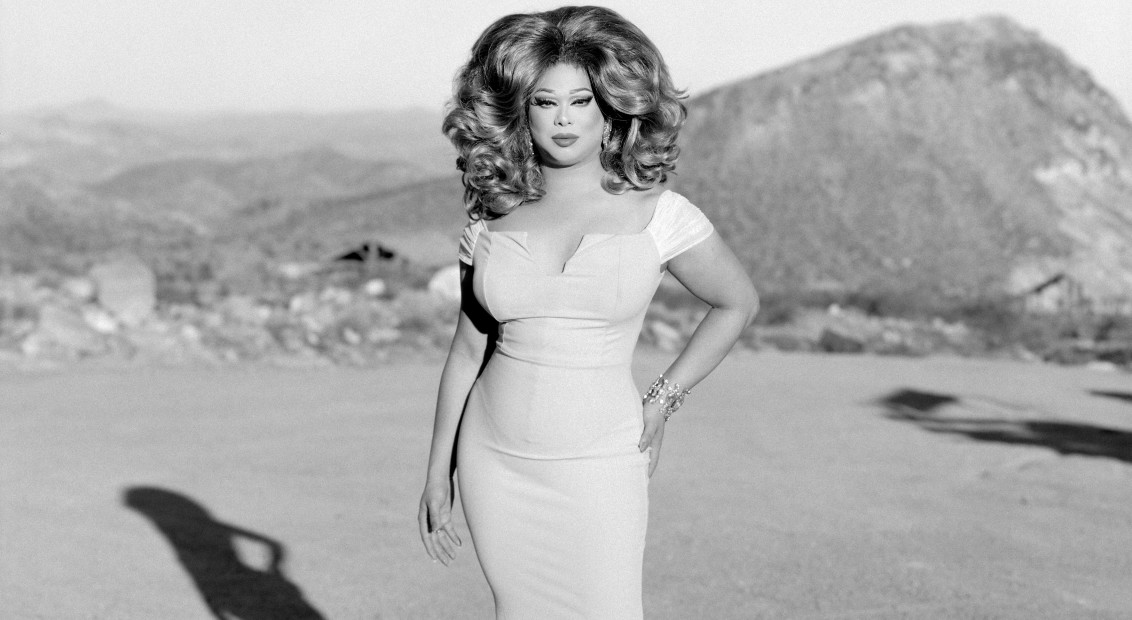 Each year, the Sony World Photography Awards bring together the best images from around the world in an unofficial health report on the state of contemporary photography. For its fourteenth  edition, the Awards have attracted over 330,000 photographs from more than 220 territories to compete in four separate prizes: the Professional, Open, Youth and Student competitions.

Before we even get to the work of this year’s shortlist, the Sony Awards represent a remarkable feat in itself: uniting an international community of photographers from the remotest corners of the world in one place. From life-long professionals to precocious new talents, the competition’s categories span street photography, architecture, documentary and travel (among others), offering a form of correspondence on people and places that differ radically from our own.

Take for example, the work of Chinese photographer Guanghui Gu, whose aerial imagery of building sites in his native province of Ninghai county reveal an oddly beautiful view of a territory undergoing seismic change. From this lush region of the Yangtze Delta we move to the arid plains of Nevada’s desert, where British photographer Jane Hilton shot a community of Las Vegas Drag Queens for a radical re-imagining of the Western archetype. Closer to home, British photographer Laura Pannack draws from a number of her series’ to deliver a profoundly emotional study on adolescence.

Below, we speak to each of these three Professional-category finalists to learn more about their work. 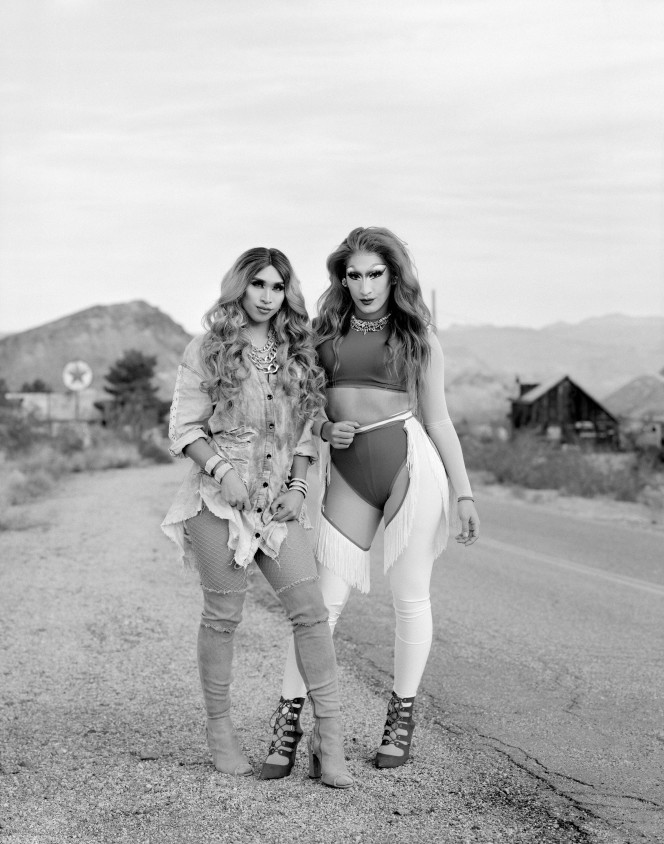 Finn Blythe: Can you tell me a bit about why you first began this series and what you set out to achieve?
Jane Hilton: I was working on a book about Nevada, and looking at the material I have shot over the last twenty-five years. Most of Nevada is occupied by desert, which is key to everything that goes on inside it. I have shot a lot in Nevada. I am intrigued by the displacement of people and the transient qualities it brings. I had already done long term projects with working girls, cowboys, burlesque dancers, hunters etc. I wanted to document another community.

I discovered the drag queen community that perform in Vegas and eventually persuaded them to leave their nocturnal habitats and have their portraits taken in the desert. One of the reasons for this was to connect them to their environment and the special qualities that Nevada brings, as seen in The Misfits.

FB: In challenging traditional notions of the West as a byword for rugged masculinity (I’m thinking Clark Gable here), what parallels have you drawn between the series, John Huston’s 1961 film and the genre of Westerns generally?
JH: Hollywood is responsible for immortalising the West with dramatic scenery and weather-beaten, handsome cowboys like John Wayne, Gary Cooper and Clark Gable. The parallels I see between my series, and The Misfits is the romance of it all, alongside a darkness. Writer of The Misfits, Arthur Miller, himself observes: ‘People come to Nevada because they have an unrequited longing for something they can’t name’.

“I have shot a lot in Nevada. I am intrigued by the displacement of people and the transient qualities it brings.” 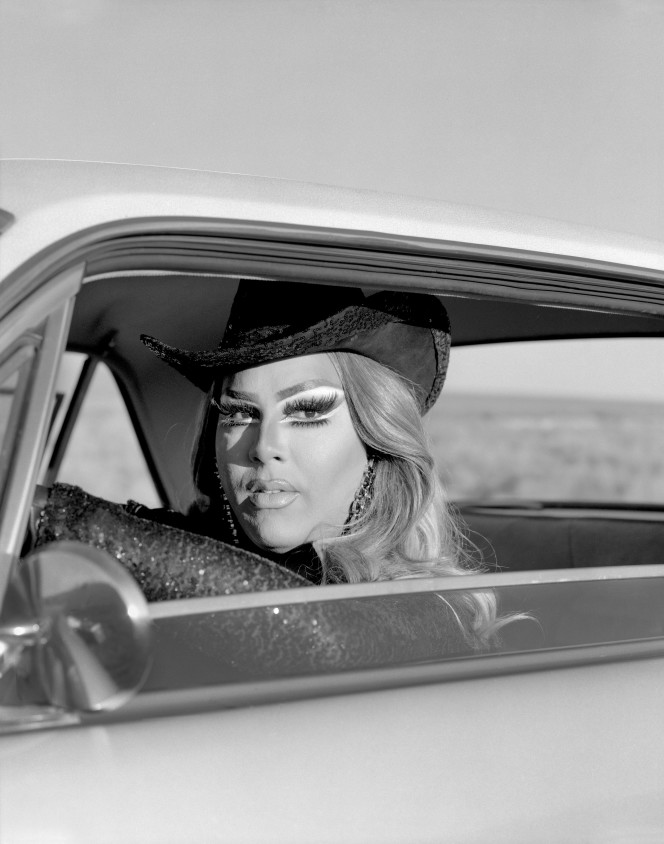 FB: How did you explain the series to your collaborators and gain their trust, especially convincing them to be shot in daylight? Do you have any methods for getting someone to relax in front of the lens?
JH: Yes, that did take a bit of persuading! I showed them the book I did with the portraits of cowboys to give them some confidence in me, and then by collaborating with them they became excited about moving out of the darkness of their clubs into the desert. I made sure their skin was lit properly and showed them some good old fashioned Polaroids. 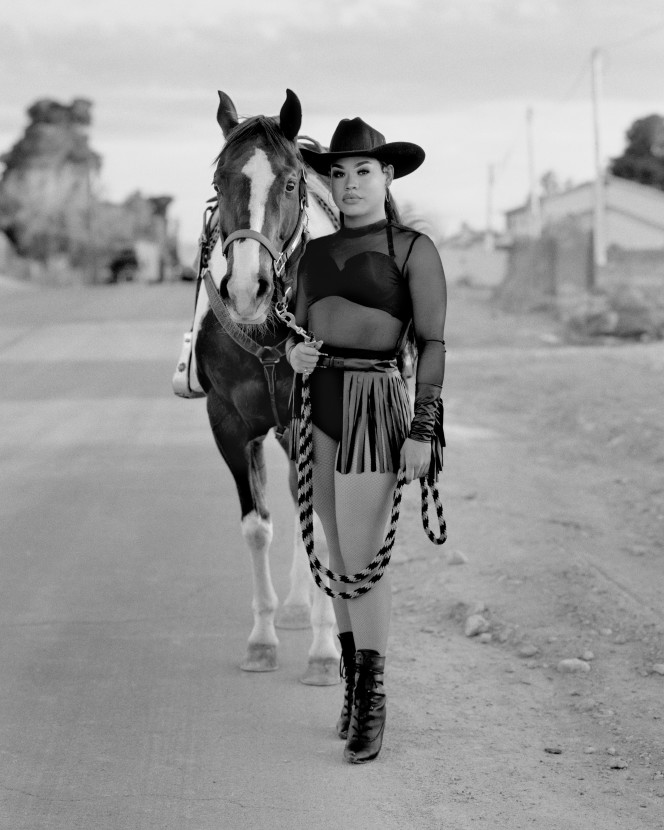 FB: Apart from the truly beautiful final image, what’s special about shooting on a 5×4 plate camera? What did you enjoy about the lack of re-touching?
JH: The plate camera gives me time to acquaint myself with people I am shooting. It also makes people slow down (including myself) and often it becomes a talking point. This allows both me and the sitter to get over any shyness, and get used to occupying the same space. There is also a performance element to working this camera. I hardly ever re-touch my photographs. I love the authenticity of getting everything on that sheet of film.

FB: You mention the series began before lockdown, do you have any plans to revisit it after lockdown has ended?
JH: I can’t wait to get back out to the states and continue this project. I was just getting my teeth into it before lockdown happened. I want to expand this project and make some more intimate photographs with the drag queens. There were some other amazing drag queens I had lined up to photograph too, so I am looking forward to continuing this as soon as possible. 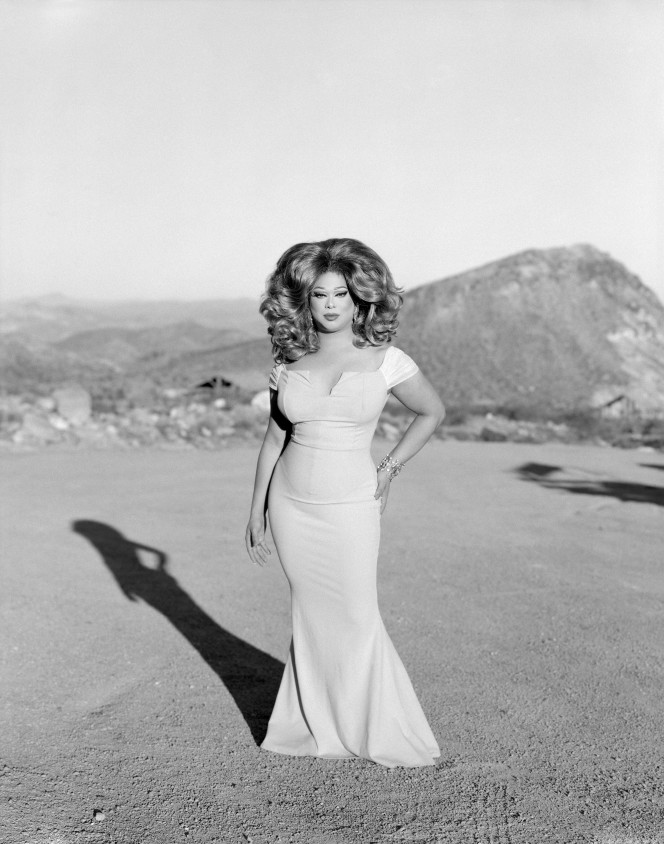 Finn Blythe: Why was it important for you to make a series about building sites?
Guanghui Gu: As a photographer, I always pay attention to the changes around me. In my hometown, with the development of the economy, the size of the city is getting bigger and bigger, and the population is getting bigger and bigger. Therefore, the construction of high-rise buildings requires more space. There are many construction sites near where I live and work. It just so happens that my job is a city archives recorder, so I often enter the construction site. First I will observe the construction workers, and then I will find some interesting elements in these chaotic factors.

FB: What made you choose specific sites over others?
GG: Because the construction site is relatively messy, so I have to think about how to find a relatively clean and interesting picture from these messy sites. That’s why I adopt God’s perspective of drones to avoid messy elements as much as possible. 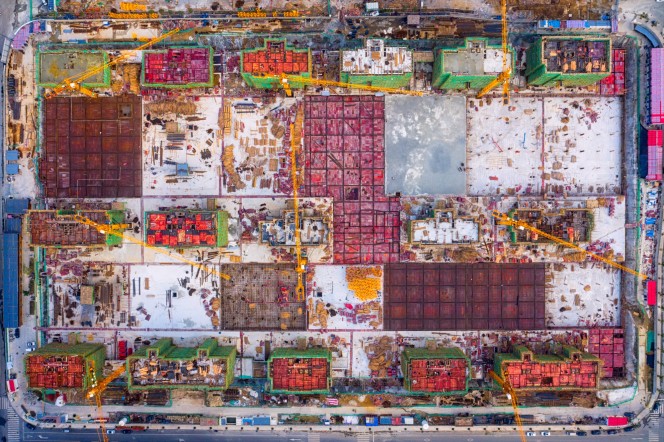 FB: What do you like about using a drone to take photographs?
GG: Yes, I really like to use drones to shoot, because drones can give me a different perspective so that I can better show the shots that I can’t see in normal vision.

“Every construction site seems to look the same, but if you observe very carefully, the differences still can be found.” 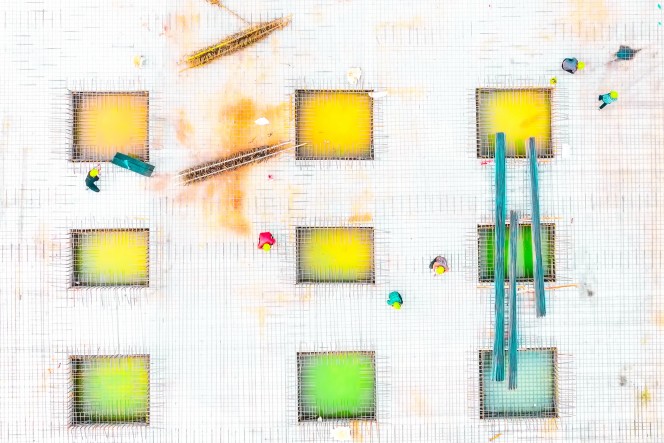 FB: Some of these photographs almost look like abstract paintings. Was this on purpose?

GG: Every construction site seems to look the same, but if you observe very carefully, the differences still can be found. It is because of some lines and geometric figures that some of my works look like abstract paintings. I especially look for such images to shoot.

FB: Can you tell me why you chose Hymn of the Building Site as the title of the series?
GG: The reason why I use Hymn of the Building Site is because I feel that every construction site cannot be separated from construction workers. It is because of their hard work that there will be high-rise buildings on the ground and we will have a stable life. And it is because of them, that our city will be more prosperous and more beautiful, so I want to praise them with words. 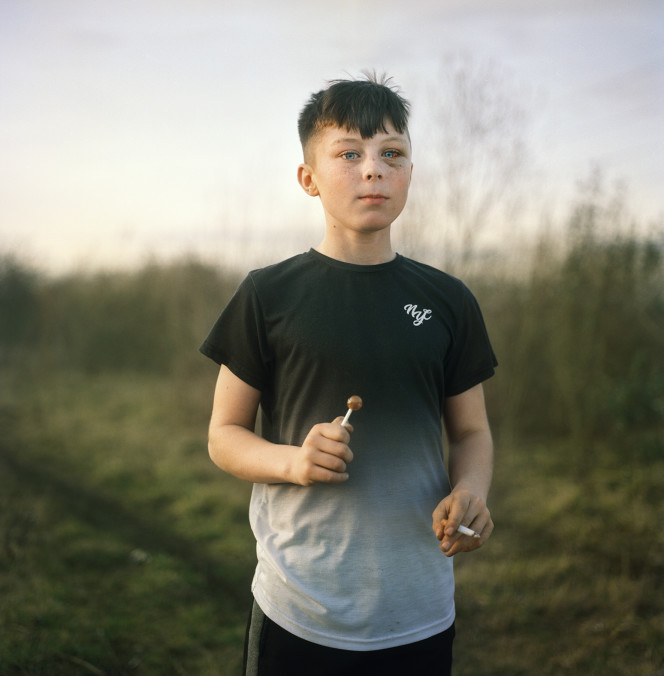 Finn Blythe: You’ve presented a number of images from various personal projects for the award. What themes or ideas do these images all share?
Laura Pannack: The consistent themes that arise in my images are centred around youth, time and identity. I often combine my interest in psychology and storytelling within my process to explore universal concepts that I find myself constantly reflecting upon.

FB: A lot of your projects frame young adolescence, what interests you about this period?
LP: I am fascinated by this stage of transience and it was an informative and painful period of my life. Perhaps I am also subconsciously trying to claw back time and revisit the teenage world as it is filled with so much drama and exploration. It is a time of heightened emotion, firsts, extremes and unknowns. I can relate to the often vulnerable yet invincible teenage mindset and the older I become the more disconnected from it I feel – it fascinates me even more. I adore working with young people. There are challenges working with anyone, but I find the relationship is more a collaborative quest to build something creative and occupy our time to kill boredom. 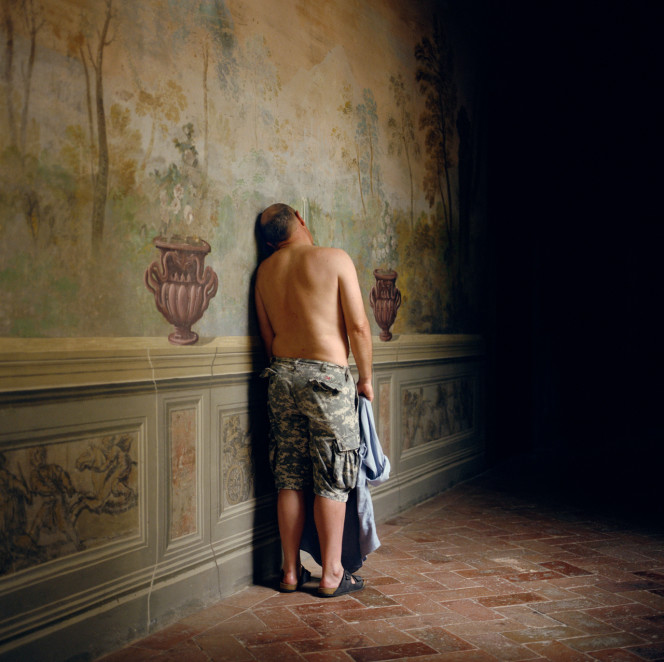 FB: Can you give me a bit of detail on one particular series that’s featured here? From its genesis to its preparation and production.
LP: Youth without age and life without death was a very personal project for me. It pushed me to explore how I can create images differently and actually build images rather than find them. My influences and process exceeded any other project. It is the most complex thing to explain but essentially I reached a point in my life when I needed to escape. I felt like time was running out. I fulfilled a dream to visit Romania as I was drawn to its sense of timelessness and whilst there I became seduced by the culture, people and land.

Working with a range of friends I created imagery in response to the folk tale: ‘Youth without age, life without death’, an uncanny metaphor for how I felt. I made each image as a response to lines within the tale that resonated with me. I built images from children’s drawings, created sculptures with a set designer and often roamed the land with props at hand to create scenes. The photographs often appear surreal as they derive from dreams, sketches or conversations – however all link back to the fairy tale and each caption explains this. All of the work is shot on expired analogue film to reflect the theme of expiration and death. The work is symbolic and playful and was a perfect way for me to express a helpless sense of chaos.

“The photographs often appear surreal as they derive from dreams, sketches or conversations – however all link back to the fairy tale and each caption explains this.” 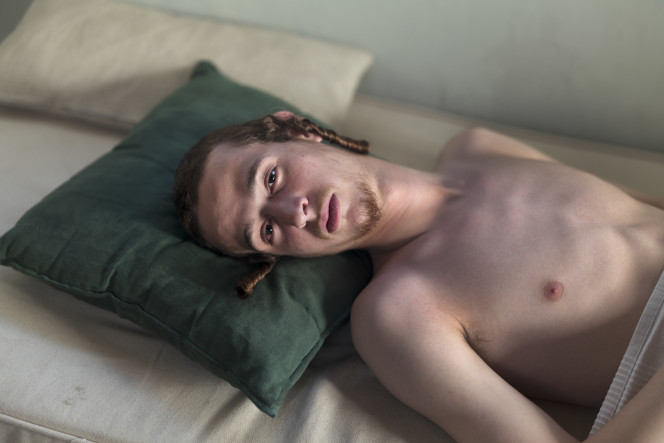 FB: You refer to symbolism as an important consideration in your photography. Can you expand on this a bit?
LP: When creating imagery there needs to be a quest. I also need there to be a reason to any process in my work. I try to include or exclude things within the frame that represent an idea or work with methods that relate to my themes. A very obvious example of this is with the work Baruch – many of the images were based around his transition and identities. Using reflection and shadows I wanted to show how his duel character was not a battle but a sign of a person with multiple identities. However, much of the symbolism within the frame is subtle. It can be hidden. I have always admired the way artists such as Crewdson hold a meticulous eye for detail, and this inspires me to be mindful when creating a picture.

FB: Can you tell me about any future or ongoing projects that you’re excited about?
LP: I am hoping to do some work that is more collaborative next. I am aiming to revisit the original printing process and explore the craft of photography more within my practice. I feel like a kid again! 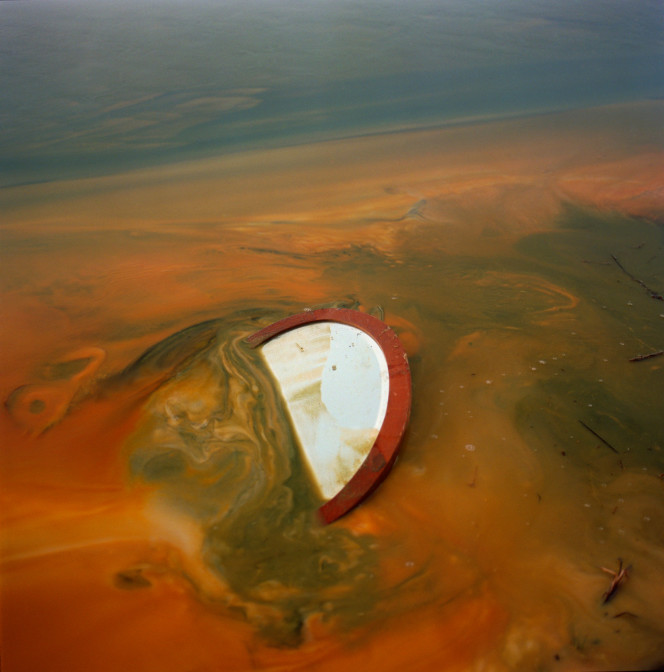 The Overall Winners of the Professional, Open, National and Youth competitions will be announced on 15th April. Find out more information online here.