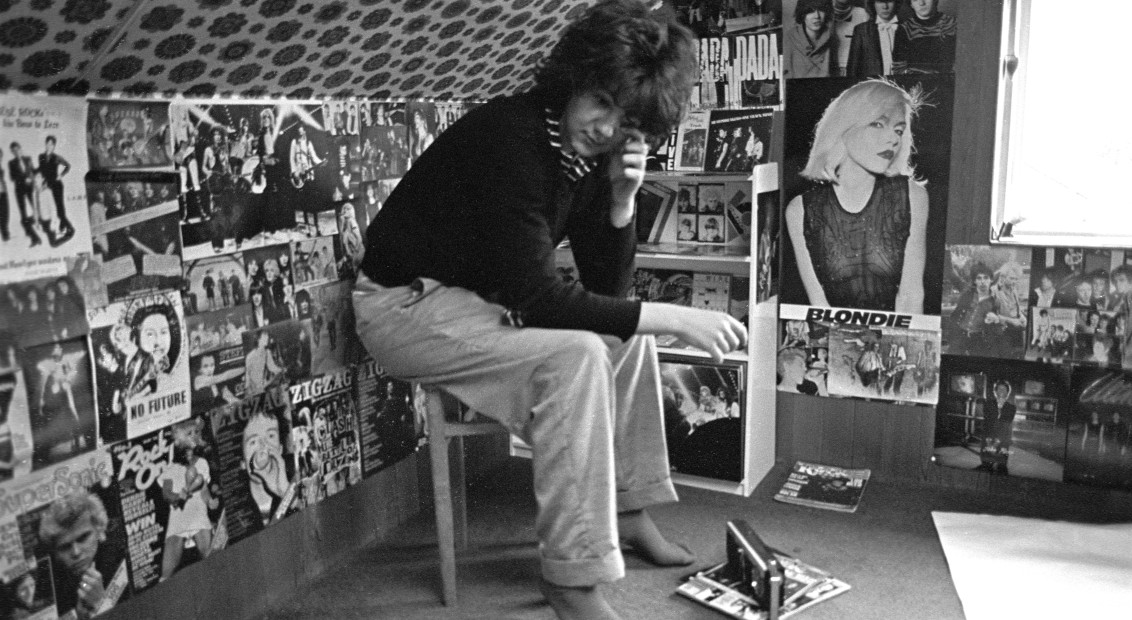 From sharing records and letters with a certain Steven Morrissey to hanging out backstage with the New York Dolls and seeing an early Suicide gig where Alan Vega bust open his cheek, spraying blood all over a bride-to-be, Dave Twist is more than a music fan. He’s a fanatic, and a bloody good one at that. Having basically spent his entire teenage years during the 70s in venues and clubs around Birmingham, Twist built a collection of memorabilia and stories unlike any other. Thankfully, all those posters, ticket stubs and signed vinyl have been kept and archived by Twist on his Instagram page. A Marc Bolan scarf, magazine clippings of the New York Dolls, David Bowie pins and Rolling Stones 7″ singles are just some of the items Twist shares alongside incredible stories of how he got them.

“It started out as a mood board of sorts,” Twist tells us. “All of this stuff is stashed into cupboards. Its curation and organisation is rather, let’s say, organic.”

Twist was clearly always turned on to music, covering his bedroom walls in Alice Cooper posters he’d collected from magazines from a shop opposite his Baptist church Sunday school. “They carried a twirling rack of random imported mags,” he recalls. “If you prayed really hard they might have a copy of Rock Scene, it was pretty much all photographs.” To this day he admits that the memorabilia bug he caught in the 70s has never really gone – on the rare occasion something was lost, he searched to replace it, and in the process picked up more on the way.

Twist’s Instagram page has now become a trip down memory lane for himself and old friends, as well as a place for those younger to feel jealous they were born too late. His account is now followed by Bobby Gillespie, Thurston Moore and Duran Duran amongst others.

Below, Twist selects five of his favourite items and shares the wild stories behind how he came across each one. 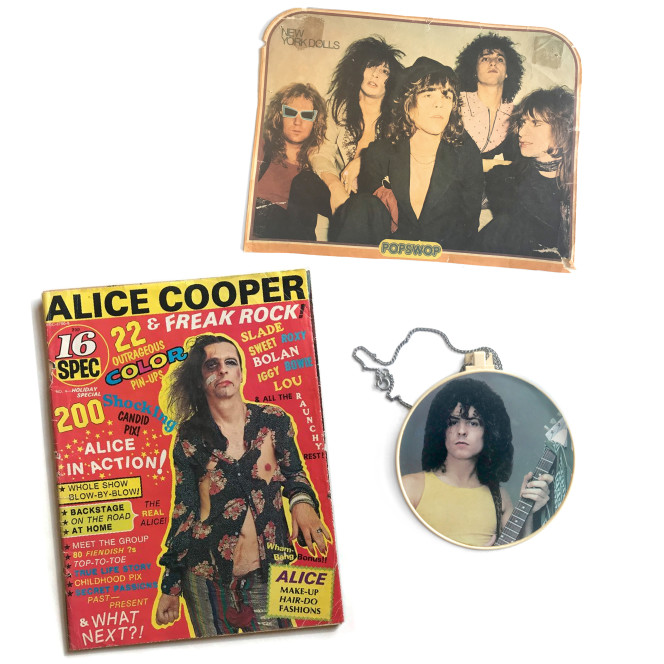 “Alice (predominantly) but Iggy and Lou too in 16 Spec magazine’s Freak Rock special. I pleaded for this every time we passed the magazine rack on the end of the pier, every single day of a family holiday to Llandudno. On the last day, they relented. Horrified, but sure in the knowledge that this was just a phase. A fad. It would pass…” 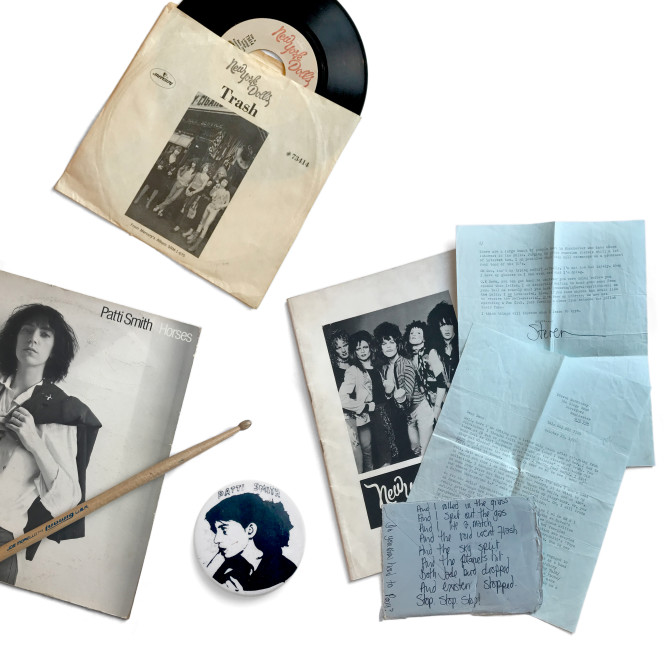 “I was sixteen in 76 and couldn’t find a single one of my friendship group who’d accompany me to see the Patti Smith Group. Most subscribed to the Melody Maker opinion that the band couldn’t play and that she looked like a man… All of that crap that the emerging scene had to breakthrough.

So, shoving my copy of Horses into a carrier bag, I headed for New Street alone. Way too early for the show I found myself down the wide side alley and listening to the soundcheck at the stage door. The only other fan waiting there was a youth who said he’d travelled from Manchester; wedge cut hair, clear plastic ‘Bowie’ sandals, national health spectacles. We got talking, he said that his name was Steven Morrissey and he wanted to start a New York Dolls appreciation society. We exchanged addresses.

We’d compared our collections: records and clippings. All of this stuff was so hard to come by in mid-70s Britain. Steven was desperate for any ‘swaps’ I might have and I knew that I had a couple of duplicate photos from Rock Scene and told him I’d mail them to him. One of these – of the Dolls onstage at the Mercer Arts Centre – was cropped out and included in his book. Steven was absolutely desperate though to acquire from me my import picture sleeve promo 45 of Trash/Personality Crisis.

I really have no idea how I came to keep his letters, but I did. Here’s the first with its envelope where, complete with misheard error, he’d scrawled the lyrics to Patti’s Kimberly on the reverse.

I managed to get right up against the stage. I’d never seen a show where the audience, performer barrier was just… down. After the show I skidded back around to the stage door and, again, this being the very start of a more inclusive thing, someone from the band came down and let the handful of fans there up into the dressing room. Patti swooned over my carefully chosen Keith Richards badge and Ivan Kral begged me for it so, “OK, cool, here you go…”

I snagged one of Jay Dee’s drumsticks and the whole band signed my copy of Horses. Problem was, the first US press that I’d bought from The Diskery on import has a high gloss, laminated pasteboard cover. Pre-sharpie nobody had anything that would write on it, so, after engraving her signature multiple times on the front in a vain attempt, Patti opened the thing up and without splitting the cover the whole band signs and writes little messages on the raw card inside.”

“We got talking, he said that his name was Steven Morrissey and he wanted to start a New York Dolls appreciation society. We exchanged addresses.” 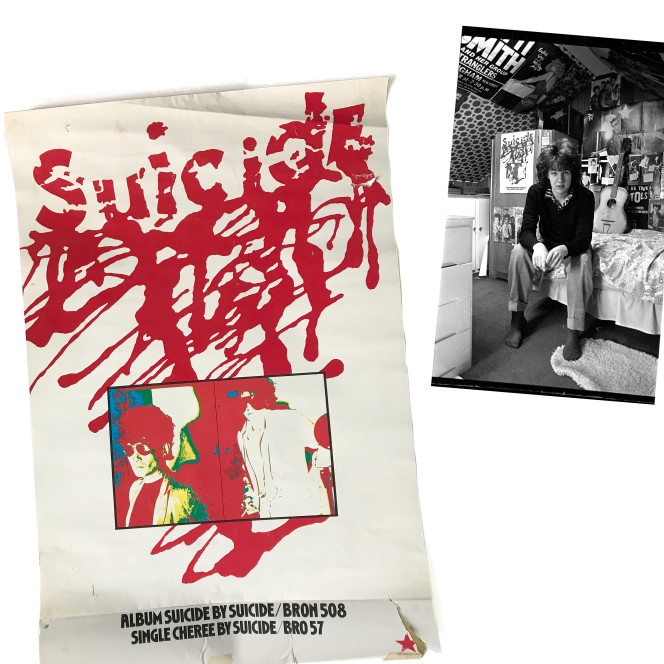 “I didn’t see Suicide until July 1978, when they battled with a baying second-generation punk crowd at Birmingham Top Rank as support to The Clash on their On Parole tour. Even better was their return to Birmingham for their own date at Barbarella’s just five days later on 17th July. Bizarrely they’d been double-booked into the side room, ‘The Pose’, with a wedding party.

The happy couple must have agreed to having this American band and their small audience of additional guests, without knowing the nature of the band, or the guests. Tensions escalated as Suicide hit the small stage. They were very, very loud. You could feel the Seeburg Select-A-Rhythm unit in your chest. Bridesmaids covered their ears while the groom and a phalanx of Oxford bagged straights moved forward to physically remove the band. The small teenage audience nervously weighed up their chances.

Then Vega, staring the mob down, smashed the microphone hard into his own cheekbone, opening a duelling scar he’d collected on a Clash date a few nights before. The mob took a step back, then another. How do you intimidate a man who is in the process of beating himself up?

We crushed into the tiny dressing room after the show, the Hollywood kids, The Prefects, it seemed wise. Vega was bloody but friendly, protective and unfazed.

On our dash out, the alcove opposite the cloakroom hatch was decorated with a small display of sleeves and posters for their debut. We descended on it, grabbing and rolling the posters as we ran for the exit.”

“Then [Alan] Vega, staring the mob down, smashed the microphone hard into his own cheekbone, opening a duelling scar he’d collected on a Clash date a few nights before.” 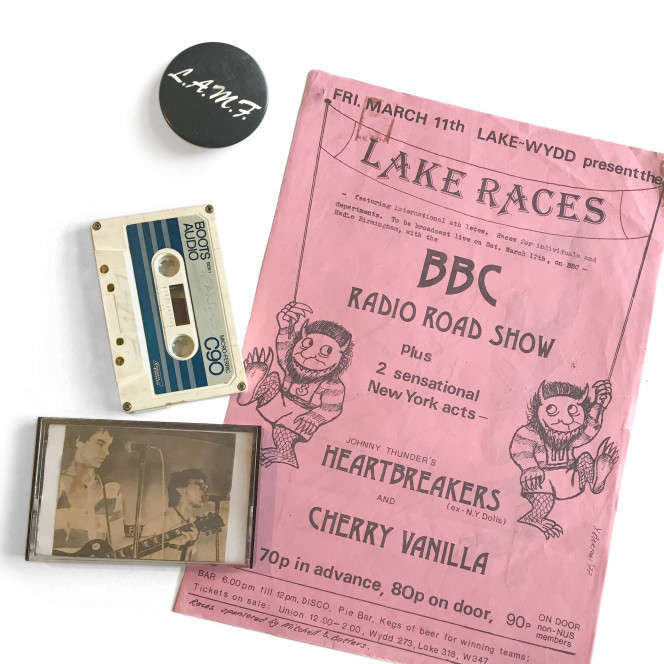 “This Heartbreakers show came between a blown-out Anarchy tour date in December 76 and their return at Rebecca’s club in May. The band must have agreed this through some agency connection to raise some cash to keep them in the UK while they waited on the Track Records deal to come together. It was a confrontational affair with the University’s rugby squad taking exception to the very few of us who’d gatecrashed by getting some bewildered student-athlete to sign us in. We’d mooched around the periphery of the small ground floor hall all afternoon hoping for a glimpse of the band. Johnny’s [Thunders] wife Julie took pity on us and got my copy of In Too Much Too Soon signed for me.

Cherry Vanilla was backed by The Police, who played their own short set in advance of her arrival. And then The Heartbreakers exploded.

No recording or film that I’ve ever seen of them since that day has come remotely close to capturing the fury of their too-short set that evening. The rugby club circling for blood, the small teenage punk crowd catapulting around. There was none of Johnny’s jaded whining that you’ll have heard on a hundred New York or London show bootlegs. They were just the best, and, when the D.T.K. Speakeasy live album appeared on Jungle in 82 we learned that the feeling had been mutual: Thunders berating the lazy scenesters there to get themselves to Birmingham and learn how to rock.

I’d brought along my small Phillips tape recorder. One of those with the single gear shift affair that you shoved forward to record or left to rewind. It came in a black punched leatherette shoulder holster and no one seemed too bothered about it being there. I taped the show and we played the tape over and over through the rest of 77 ‘til L.A.M.F. finally appeared. It’s definitely more than a little lo-fi now and has a few audience conversation snippets between songs. Very Bridget Polk. It might just be the earliest UK live recording of the band, I’m not sure.” 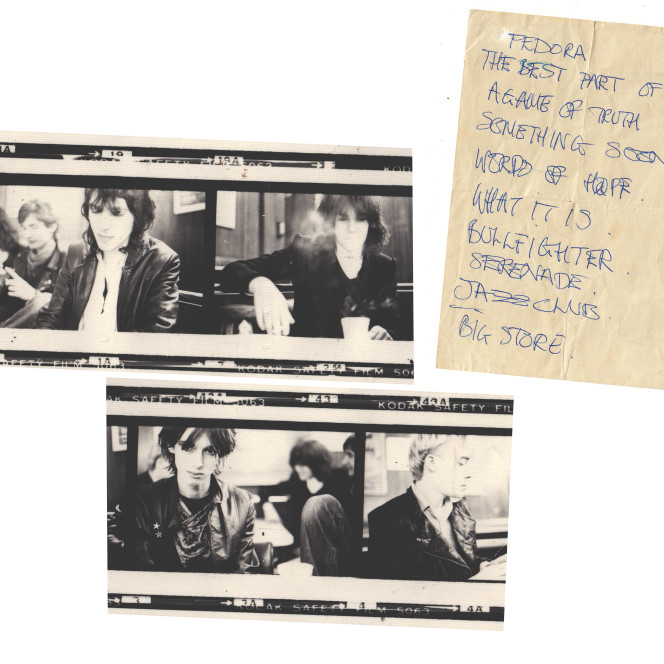 Photographed in Digbeth Coach station cafe in 1979 by Brendan Jackson. Sounding like something that might become Orange Juice or Creation-era Primal Scream, we’re clearly inventing the ‘scene in-between’ about half a decade too soon. No one understood what we were trying to do. We didn’t understand what we were trying to do. Too ragged to be rock and too rock for the earnest anti-rockist, we made our own single and forgot to promote it.

The power of Instagram? Stephen held out on releasing any of our material for the longest time – there’s a stack of tracks on cassette demos that only scored rejection letters from Rough Trade and Island. The songs are wonderful. I post these scraps from an old contact strip and Stephen say’s “that’s the cover.” And what do you know, in a couple of months time, it will be.”