Having been a young designer on the London circuit himself, Alan Taylor knows the fashion industry well – including its falacies and flaws. Having since shifted his attention to various artistic paths, he has now found his voice as omdo STUDIOS, a multidisciplinary London-based studio centred around the ethos of circular design, sustainability and collaboration.

Like Eames and Bauhaus, omdo thrives on the mantra that design is a baseline communal language that should provide a societal blueprint, and from this, create in a manner that is responsible, progressive and ethically-minded.

omdo STUDIOS’ debut product release kickstarts its |editions| line. A perfect manifestation of the studio’s design mindset, the project is a limited-edition and sustainable printed garment collection featuring collaborations with a revolving line-up of visionary artists. Each piece will be crafted from certified organic material and made to order, ensuring no excess stock or waste. Launch artists include Nick Waplington, Sophie McElligott, SORT, Begum Yetis, and Trisha Ward – each will have three images limited to a run of 50 prints each for a special limited edition, and a portion of sales donated to a charity of each artist’s choice.

Below, omdo founder Taylor talks us through his aims and ambitions while addressing why the industry needs to change, ASAP.

Alex James Taylor: Can you talk us through the goals and values of the company.
Alan Taylor: omdo STUDIOS is a multidisciplinary design studio centered around the ethos of collaboration and sustainable, circular design. We don’t want to tie ourselves to any one medium (fashion, ceramics, furniture, etc) we feel that someone who has a voice as a designer can lend that voice to multiple disciplines in collaboration with skilled craftspeople without distilling their message. The Eames office has been a massive influence for us in this respect, they designed everything from furniture to films and product design to architecture, not worrying about their expertise but embracing the unknown and using that ignorance as an advantage. We think Richard Saul Wurman said it best “You sell your expertise, you have a limited repertoire. You sell your ignorance; it’s an unlimited repertoire! He [Charles Eames] was selling his ignorance and his desire to learn about a subject, and the journey of him not knowing to knowing was his work.”

Second we are driven by sustainable circular design, We realise that being sustainable is not just about having a sustainable line as an add on to part of your business rather it is a far more big picture perspective, there is not one fix, rather a mix of varied initiatives that need to be implemented at the same time. Most businesses are trying to adapt their current model to be more sustainable, however we at omdo STUDIOS are looking to implement them from the ground up, reinventing the business model so it’s sustainable from the start.

AJT: For you, what’s the importance of artist collaboration – in general and in terms of omdo?
AT: I think artist collaboration is vital to creative development. Having another voice in the room always stimulates new ideas from projects that either party may have found stagnant. Art has always been a massive influence for us at omdo STUDIOS, from Richard Serra and Donald Judd to Tracey Emin and Amoako Boafo, it seeps into all of our projects both indirectly and directly so it just made sense to do the omdo STUDIOS |editions| project in collaboration with artists that we love. 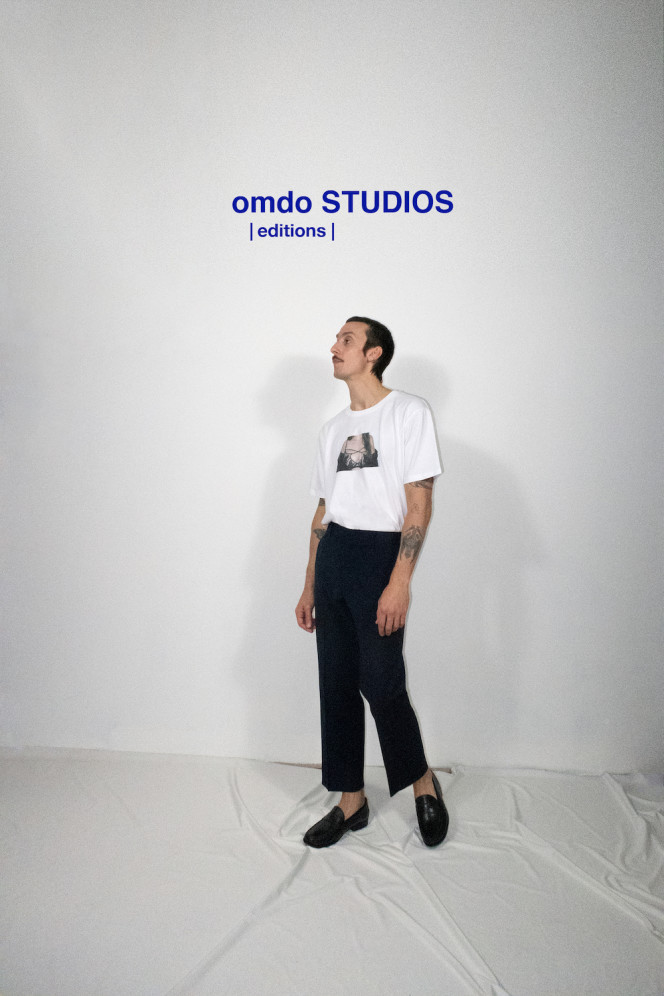 AJT: How did you choose the artists involved?
AT: For this first drop, it has been an almost autobiographical selection, these are artists that I have come in contact with and am friends with from different points in my life – I have been incredibly inspired by their work and their personalities. From Sophie McElligott who I met through the British Fashion Council when I had my old label, to Louie Waller when we both worked together at the Kenton Pub in Hackney, the guys at Sort who were one of the first stylists to use my garments and Trisha Ward who shot my first ever magazine cover. All of them have gone on to be wildly successful and I wanted to celebrate their work and what amazing people they are. Also, for the lookbook, we wanted to use people that inspire us rather than traditional models: Alex O’Neill (Director of Comms at White Cube Gallery) Ryan Lanji (Curator) Cozette Mccreery (Designer) and Jim Cubitt (Musician).

For future drops, we will be going much further afield with artists from Asia, America and Africa but it has been amazing to work with this group for the launch.

AJT: In terms of sustainability do you believe that the industry model needs to change?
AT: Absolutely, one of the most staggering facts is that 30 percent of all garments made today don’t even make it to the consumer, this shows that the whole model is broken, we need systemic change. Unfortunately, like I mentioned before, there isn’t one simple solution to the problem, we need to be looking at several different areas like regenerative farming, the made-to-order movement, clothing rental, upcycling, recycling, modular design, etc. If I could focus on three main issues it would be, throw away culture, laws and legislation and transparency. Fast fashion has pushed us so far, we are essentially at a place where clothes are seen as single-use, we need to change public perception on this and have people see their clothes as an investment, buy better and buy long. Also, the fashion industry is essentially self-regulated, which is insane and needs to change, we need laws and legislations put in place that ensure environmental and human rights standards both here in the UK and globally. Finally, and this ties in with the second point, radical transparency is something we really believe in, at omdo STUDIOS we will not only tell you all of our suppliers but our costings too – if you have nothing to hide about your supply chain then there should be no reason why you can’t share it to the world. We hope that this will become the norm and stop things happening like the factory workers who were paid as little as £3 an hour in Leicester, not even halfway around the world but a two-hour drive from London.

AJT: And on that, how can it change when customer demand is so ceaseless and immediate these days? Do you believe that the demand is only like this because the industry has lead them down this path or do you think it’s a wider societal issue?
AT: I think it is both, it is not a new phenomenon, demand for newness has increased since the industrial revolution and technology doubles in speed every year so it would be naive to think that consumer habits would not follow a similar trajectory. I think people have to realise that to be sustainable you have so many different avenues that you can go down, you don’t have to sacrifice this newness and all start wearing hemp sacks!

There are some amazing clothing rental companies like Rent the Runway and YCloset that increase the utility of garments and keep them out of the landfill while allowing the consumer to get their newness. Along with something that we are doing with omdo STUDIOS |editions|, our ‘Buy Back Initiative’, which is to keep our garments out of the landfill, offers up to twenty percent off a future purchase if you return the garment to us. We will then repair (if necessary), clean it and have it for sale again on an archive section on the website, creating the circular aspect to our company. Overall we realise that consumer habits aren’t going to change overnight, it will happen in slow incremental changes. For those looking to change now, one thing we can recommend is taking your time, when you are about to buy something think to yourself, “Am I going to have a relationship with this, can I see it having value and being part of my life in five-ten years?” If the answer is no, then don’t buy it!

“…the whole model is broken…” 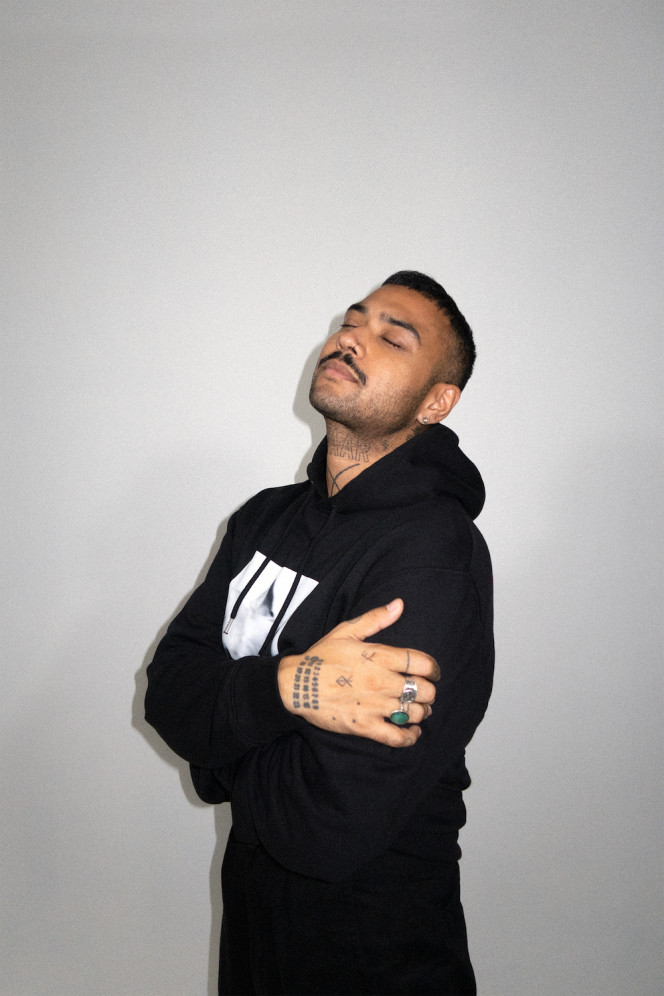 “Young designers are getting screwed over and everyone involved in the industry from large stores to fashion week systems are knowingly letting it happen.”

AJT: Having been a young designer on the London circuit yourself, what challenges did you face and how have you looked to address these with omdo – if at all? Has your own experience given you greater insight?
AT: This has actually been one of the founding aspects to omdo STUDIOS. Of course we are driven by environmental and human rights issues, but the unsustainability in business was what drove me to look for a new business model. I have seen first hand so many designers who are considered really successful who are just about keeping their heads above water. The wholesale model is broken for young designers and they are stretched to the edge, both financially and mentally through the London circuit. The idea that you would spend a minimum of around £50K per season on running the business and doing a catwalk show and then spend another £5-10K on a showroom with the hope that stores will buy is ridiculous. Then when stores do buy, the majority don’t give deposits, then you have a cash flow problem, combined with sale on return, which is where some of the big department stores will make huge orders and then only pay you for what sells at the end of the season and you have to take back unsold stock.

Young designers are getting screwed over and everyone involved in the industry from large stores to fashion week systems are knowingly letting it happen. We want to be part of a industry revolution, changing the antiquated systems of the luxury industry to create a more holistic luxury fashion ecosystem that benefits creative brands, consumers, workers and the environment without sacrificing quality or aesthetics.

AJT: What’s next for omdo STUDIOS – what’s your plan?
AT: We have some collaborations in the pipeline, shoes, jewellery and ceramics which we are really excited about and we are working towards launching a made to order unisex collection with a full range of garments.

Follow omdo STUDIOS and shop the |editions| collection here.
Tune into omdo STUDIOS Instagram for a series of in-conversations.