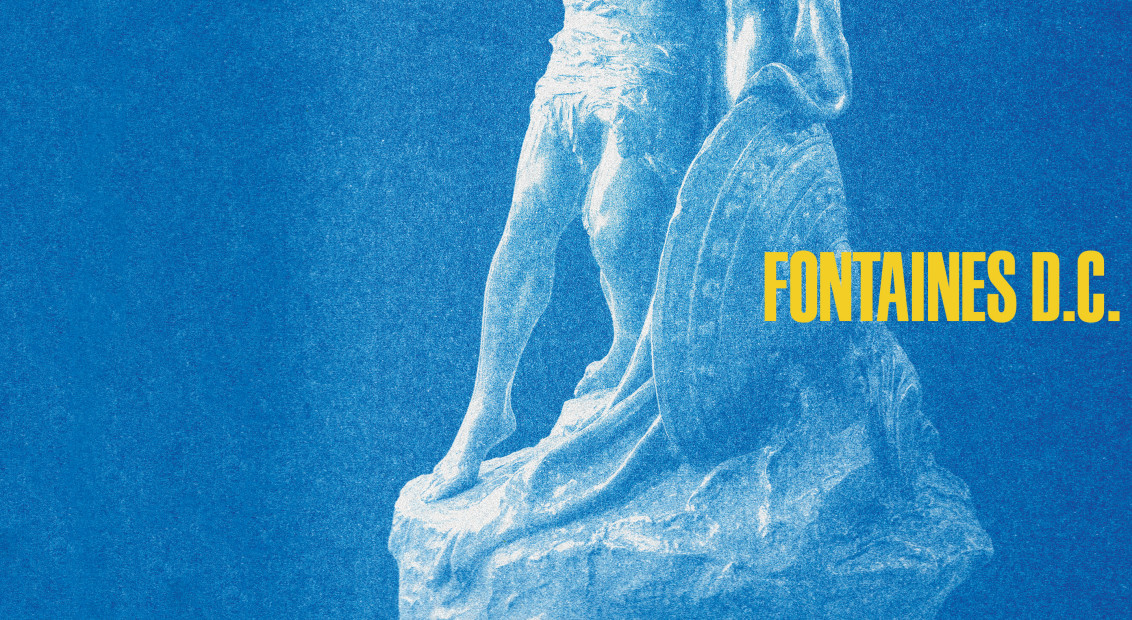 To mark the release of Fontaines D.C.’s sophomore record, A Hero’s Death, we’ve invited the nascent Irish band to take over HERO. Watch out for exclusive content and insights into the band’s influences, experiences and obsessions…

Designed by art director Charlie Drinkwater in collaboration with the band, the artwork for Fontaines D.C.’s new record, A Hero’s Death, is a bold and determined image that encapsulates the nature of the music it wraps.

Printed as a medium blue risograph on recycled coffee cup paper stock, the imagery depicts Oliver Sheppard’s statue of mythic Irish warrior hero Cú Chulainn (1911-12), who is said to have continued to fight against his enemies in the Táin Bó Cúailnge (commonly known as the Cattle Raid of Cooley) while gravely wounded having tied himself to a standing stone. In 1934, the statue was appropriated as the official memorial to the ill-fated 1916 Easter Rising, erected in Dublin’s General Post Office as a symbol of cultural nationalism, political independence and as a metaphor for the resolve of the Irish nation.

As part of Fontaines D.C.’s HERO takeover, here Drinkwater and bassist Conor Deegan explain the conversations, mythology and symbolism behind the album artwork, and the band’s connections to Sheppard’s renowned statue.

“Before we had even settled on a name for the album, we knew that we wanted the cover to be blue. Blue always brought us to an introspective place (one which we got to explore from the blue lights on stage during our performances of The Lotts). It represents the depths of the ocean and therefore of the mind. This kind of introspection and unknown depths trawling is what informed most of the writing process of the album.

An early song we had written was A Lucid Dream, the original title of which was A Lucid Dream Of 1916. It was about ‘waking’ into a living dream of being at the Easter Rising. This sense of dreamlike reality also pervades a lot of the other songs we wrote for this…

It was therefore pretty apt to appropriate Oliver Sheppard’s statue of Cú Chulainn to represent our album. It was put in the GPO (a site involved in the Easter Rising) to commemorate the fallen heroes of 1916, and to me, tie them in a sense to mythology, to Irish mythology, and to intentionally situate them in the perfect position to transcend. To abstract their humanities and flaws in order for them to become archetypal figures representative of ideology, or republican virtues, or the legitimisation of the Irish ethno-political state.

These things in some ways correspond to our lives after Dogrel. We became representative of some kind of thing, be it Dublin, poetry, or rock and roll. Far be it for us to actually claim any of this ourselves, but we were raised to this by the media et al. We address our own humanity on this record in a hope to demythologise ourselves, to show our flaws and humanity in equal measures, and to try and make some good fucking music.”

“We became representative of some kind of thing, be it Dublin, poetry, or rock and roll. Far be it for us to actually claim any of this ourselves, but we were raised to this by the media et al.”

New album artwork for @fontainesband forthcoming album ‘A Hero’s Death’ The art has been a process of exploration and refinement based around a clear artistic vision the band had since last year, cannot thank the lads enough for the trust placed in me. Taking on a tactile and physical approach that in part references the nature of the record, this image was printed as a medium blue risograph on recycled coffee cup paper stock and then scanned in at a high resolution giving it a bold yet diffuse texture. Massive thanks to @theresaadebiyi at @partisanrecords for all the creative support, @duplikatpress for all the test prints. Lots more to come… Life ain’t always empty… . . . . fontaines #fontainesdc #artdirection #design

“I met the guys over in Dublin back in winter last year and though the course of our conversation about how they wanted to visually represent the music the myth of Cú Chulainn and the wider story of the Oliver Sheppard statue at the GPO came up. I must state I was acutely aware that as a Brit, all be it with Irish heritage, I was handling a founding image of a culture and history, and we thought at length about the tension (both human, political and creative) this bought up. This myth and symbol are a revered legend on both sides of the Irish Border, and we needed to be confident and committed in why we wanted to explore it in relation to the record, i.e. the existential choice of one’s principles and what they represent. It is a symbol laden with many years of political resonance for Ireland – we had to ask what tensions and new meaning do we give when we bend and shape it and present it in the context of this art?

It is often quite rare to have such a strong bedrock of an idea when discussing artwork and it felt apt we explore the meaning and context Deego [Conor] has spoken about. This idea of ‘demythologising’ a person, group or set of ideas to come back to a ‘human’ identity felt profound and rich. In the process how do you make something big, small again? Because of this we also made the conscious decision that I shouldn’t listen to the album as I was making the art; we should attempt to work in isolation from each other so as not to dilute this concept and skew my interpretation of the band, or place expectations upon the record through my consumption of it.

The final piece was printed on a Risograph machine, a print method that is kind of a cross between a photocopier and a screen print, where an exposed negative is made and printed on a drum. It was originally intended as a low-cost way of mass-producing leaflets and newsletters back in the 1970s-80s but has since been highjacked for fine art purposes and saved from redundancy. This low cost, throwaway nature of the printing process served to highlight the less referential spirit of the album and its meanings offered up.”

@fontainesband ‘A Hero’s Death’ out today Art by me / Band photography by @poonehghana … ‘When you speak, speak sincere’ thanks and love to the band…