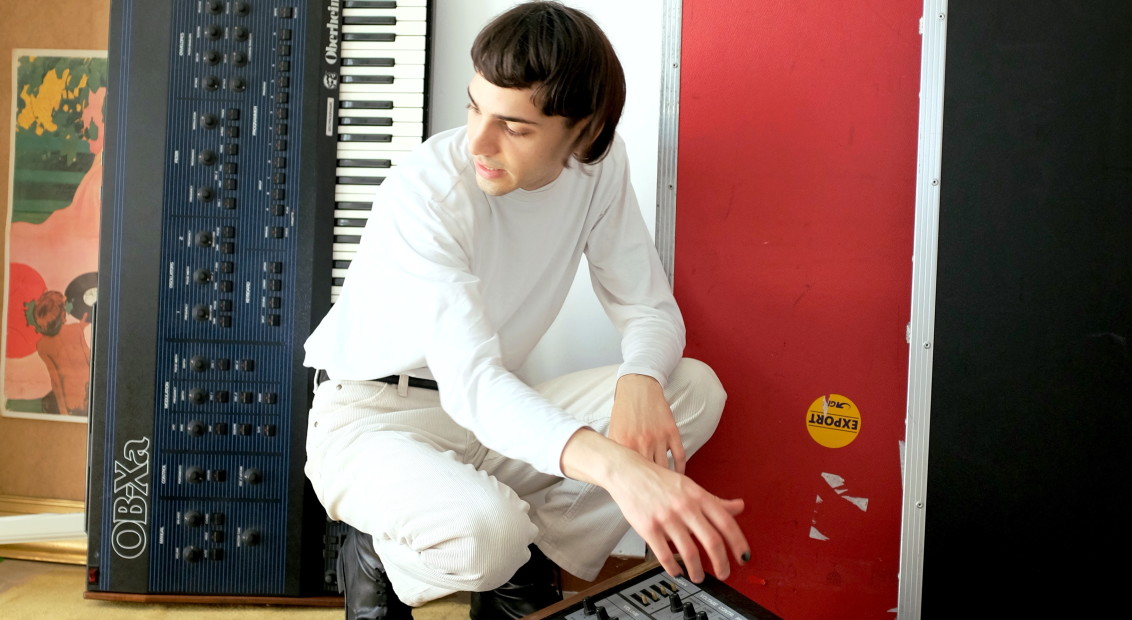 Just like Jean Des Esseints – the dandy protagonist of Huysman’s novel À Rebours – who had to travel abroad to better appreciate his life in France, Milan-based synthesiser collector and composer Elvio Seta had to go to Berlin to fall in love with Italo disco and figure out his artistic path.

In the German capital, Elvio suddenly realised that Italo disco didn’t necessarily mirror the cheesy pop sound he got to know in his childhood. Filtered through the savvy Berlinese clubbing scene, Italo acquired a whole new meaning and opened Elvio up to its more obscure sub-genres. Heavily on rotation in the city’s flamboyant underground gay club scene, Italo represented an epiphany to the then eighteen-year-old musician.

A lover of analogue electronic devices prior to becoming a musician, Elvio’s ambition to thoroughly understand and emulate the music of his idols – from the 1960s lysergic organ of The Doors to the drum-machine beats of new wave – saw him build a substantial collection before ever thinking about creating music himself: “I believe that a musician can be considered as such only if they’re truly prepared,” Elvio tells us below. Once fully versed in the art of the synth, he formed the artistic moniker Ital O Scillazioni and manifested his influences into world-building soundscapes, blending Italo culture and sound with fascinating aesthetics that borrow from 1960s space-age design as much as from 1970s Giallo cinema and 1980s dark-tinged new wave.

Upon the release of his latest live set – Ital O Scillazioni prefers the thrill of live performances to studio recordings – we reached Elvio in his Milan flat-cum-studio to talk synthesiser fetishism, Dario Argento and cult Italian composer Franco Battiato. 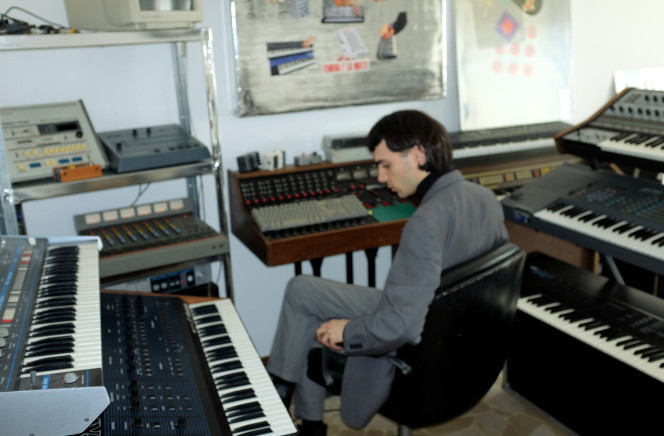 Lorenzo Ottone: Other than being a musician, you’ve been a synth collector since a very young age. How was your passion for the instrument born and when did you actually start playing it?
Elvio Seta: Since I was a kid I started getting into the realm of analogue electronics. Initially, it was about the fetishism of the object itself and about owning the same instruments my idols used. I loved the contact with instruments prior to becoming a musician. I started with Vox organs in the style of The Doors, and I then carried on with vintage synths and drum machines.

It came naturally to start experimenting and creating my first compositions. However, they’ve remained unreleased for a while because I didn’t feel ready to present myself as a musician. I believe that a musician can be considered as such only if they’re truly prepared.

LO: You lived in Berlin for a while. How did the city influence your musical research?
ES: It may sound odd, but Berlin played a fundamental role in re-discovering Italo Disco. Abroad, especially in Northern Europe, the genre is celebrated within underground environments, like in the gay scene. The atmosphere I found at those parties – which I had never seen in Italy – made me suddenly realise what kind of music scene I wanted to belong to.

LO: What brought you to prefer live sets to studio recordings?
ES: Loving the contact with instruments. Even as a member of the audience, I would look for performing artists showing their authentic creations, rather than just a selection of tracks from others. I’ve never thought about conceiving my music as DJ music, I strictly am a musician. I couldn’t even cue two records. I’m aware that sometimes DJing could be more complicated than playing an instrument, but I tend to see the two things separately. I’m quite disappointed in seeing a music industry that requires DJs to be producers too, and vice versa, instead of letting each of them further explore their area of expertise.

LO: Talk us through the soundscapes in your latest live set?
ES: The set was conceived as a live performance where I played five tracks, including three unreleased ones and a synth-themed spoken-word intro. Most of the tracks played have a distinctive Italo nature, although there are influences from mid-1980s dark wave and synthetic classical music. I threw lots of improvisation into the mix, using 1970s Space Disco chords to amalgamate the tracks together.

LO: We are currently witnessing a re-discovery of Italo Disco across all Europe, what is the side that mostly fascinates you?
ES: The genre has many faces, some of which are often mislabelled as Italo even if they aren’t. The term was first coined around the mid-1980s in Germany to label all those songs from the likes of Den Harrow, Miko Mission, Savage, Koto, Baby Records, and so on, which are still considered Italo to this day. However, Italo had already been existing for a while, since the late 70s with the likes of Pino D’Angiò, for example. Abroad they would use the term Italian Disco – from which Italo Disco comes from – to distinguish disco music made by Italians in Italian from other productions. As simple as that.

There was also a widespread scene in the early 80s, mostly unknown to the masses and now known as ‘Obscure Italo’, which wasn’t pop, wasn’t disco music, and wasn’t Italo neither. These were records produced in Italy, approximately between 1980 and 1984, by small independent studios on very low budgets, and pressed in a limited number of copies. That’s the kind of Italo I adore, mostly because despite the raw-sounding synthesisers and vocals often out of tune, they showed a damn pure attitude and had a strong sex appeal. That’s the music I make, with slightly more consciousness, or maybe too much. 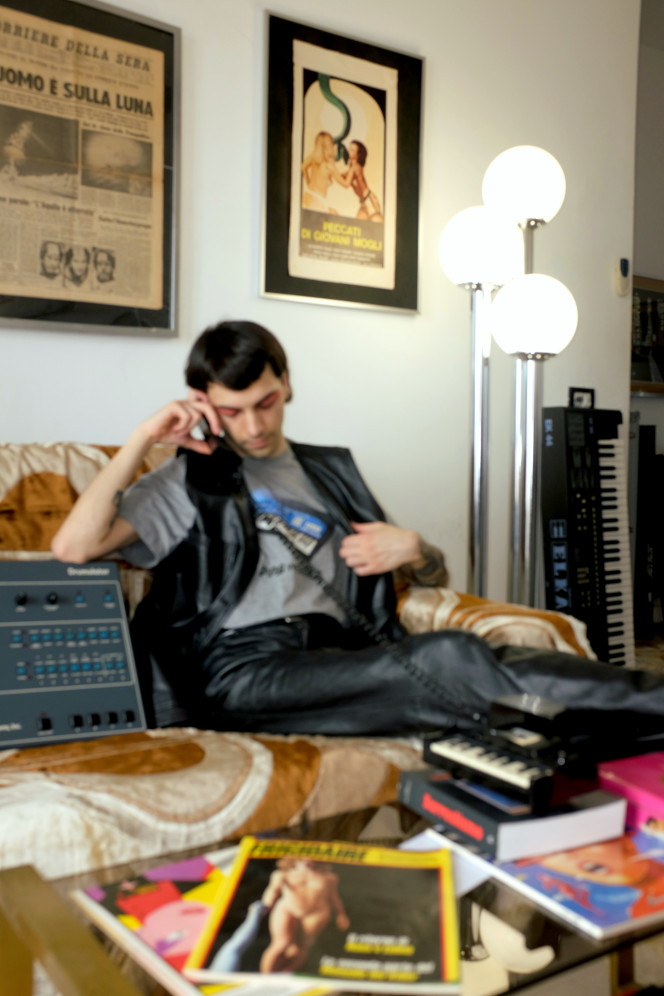 LO: In your music there is a Giallo soundtrack presence. Goblin’s Claudio Simonetti was, in fact, one of the forefathers of Italo. Are you into this cinematic genre?
ES: I’m truly passionate about 70s, 80s Giallo cinema, especially the 70s. I adore its aesthetics, photography, and music. Italian cinema maestro Dario Argento is among my idols. However, I don’t think this is necessarily connected to Italo productions, or better, not everyone making Italo is interested in it.

LO: You are a passionate researcher of vintage Italian fashion and design. Can you guide us throughout your aesthetic influences?
ES: I am mostly fascinated by three decades, the 60s, 70s and 80s. The 60s are fundamental because of the Space Era and the cultural harmony with it. I like its historical facts like the moon landing as much as the collective popular interest in the space programme, and most of all its design and architecture.

The 70s is the decade I prefer overall for its aesthetic, cinema and car and furniture design, mostly because of its futuristic vision which was mirrored by a variety of styles, like the juxtaposition of silver and black, white lamps or gold-rimmed smoky grey glass surfaces. However, the 70s was also the heyday for the production of my beloved synthesisers.

When it comes to fashion, I love the 80s. Although most people tend to wrongly identify those years with Nike trainers and fluorescent tracksuits, I love the dark new-wave aesthetics, à-la Depeche Mode.

LO: Browsing your Instagram feed I noticed you have a tattoo of Franco Battiato, the seminal Italian synth-pop artist.
ES: Franco Battiato has been a point of reference of mine for many years. He is a sort of artistic and spiritual father. I estimate him not just as a musician, but for multiple reasons. Over the years I examined in depth his thought, and his concept of art and existence, which helped me to get through many tough stages of my life. I still carry on examining his teachings these days by studying all those maestros and thinkers he references in his works.