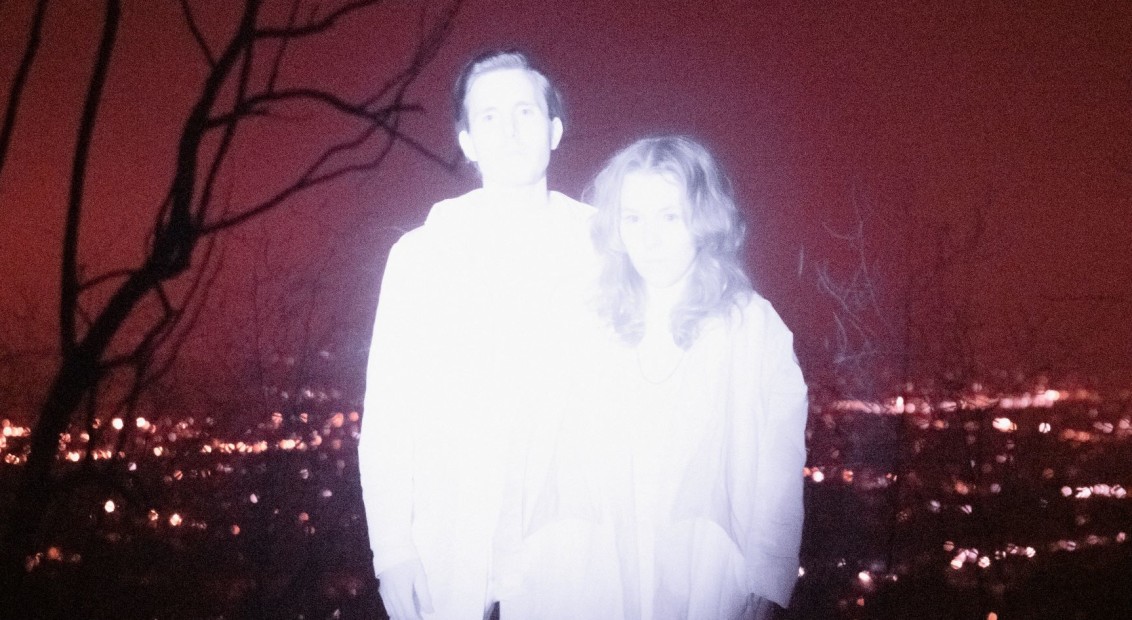 It’s been five years since Purity Ring – the distinctive musical duo comprised of Megan James and Corin Roddick – released Another Eternity, their anthemic 2015 sophomore album. Since then they’ve been working on projects for huge artists like Katy Perry, as well as slowly pulling together their own newly-released album, WOMB. Sonically, it bears all of their hallmarks: crystalline synths, hypnotic melodies and visceral, occasionally violent lyrical metahphors. But there’s also a distinctive lightness that permeates throughout.

The accompanying press release describes WOMB as a “quest for comfort”, so it feels poignant this Zoom interview with Megan comes as she’s learning to navigate life amidst lockdown. “Can we share screens?” She asks, laughing. “I haven’t seen another face in so long!” It’s also been just a few hours since the band announced the postponement of its highly-anticipated tour de womb, yet the tone of the conversation is optimistic, propelled by Megan’s hope that fans will find the same sense of contentment in this record as she and Corin felt when making it.

In terms of lockdown recommendations, she namechecks a handful of films and documentaries – David Lynch‘s back catalogue, The Elephant Man, Crip Camp, Tiger King (“a classic!”) – as well as artists like Default Genders (the main pop girl 2019 album specifically) and Dua Saleh, describing their music as “exciting and satisfying in a way I haven’t felt for a long time”.

But Safe, a 1995 horror film about a rich yet dissatisfied housewife with an unnamed illness, resonated. “That movie destroyed me,” Megan recalls. “I had a really intense reaction. It’s about female suffering, which got to me in a really weird way.” Perhaps that’s because WOMB became an artistic experiment in pulling beauty from today’s increasingly chaotic world, with themes of domesticity and nurture recurring throughout. To tie in with today’s release, Megan opened up about being inspired by mythology and matriarchy, the personal as political and the ongoing necessity of finding solace in isolation. 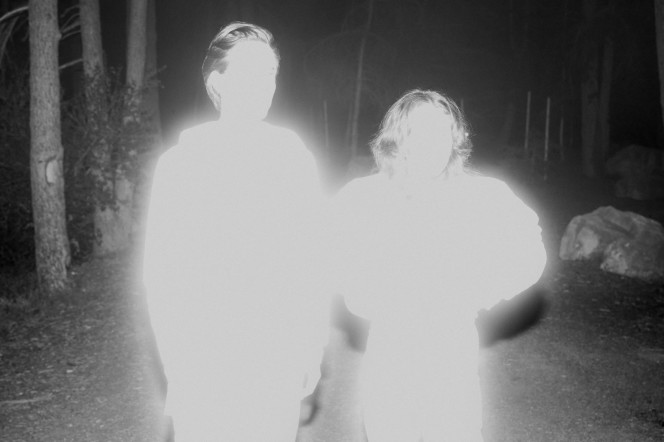 Jake Hall: When did this “quest for comfort” description of WOMB become apparent to you?
Megan James: I knew from the beginning that we would be able to create this world out of the songs we had, but it didn’t come together until the end of last year when I listened to them altogether. It became apparent what this record would be, and then we wrote the rest to tie it all together. I just remember feeling so comforted when I listened, like it was really what I needed. Writing makes me able to step back and be objective about what I’m thinking or feeling, which helps in terms of dealing with it. femia was one of the first songs we wrote, which was about the matriarch in my family. The record then became its own family: a mythological one, with all these archetypes that came from my feelings.

JH: There’s such a singular world around what you do, almost like a Purity Ring stamp. That really comes across on social media, too.
MJ: I’m glad you see it that way – I’ve been losing my mind over social media! Sometimes I’ll just post something and think, “Whatever, it doesn’t matter,” but other times I’m more conscious of it and it becomes stressful. We planned what singles would come out before the record, but nothing more. Mostly, it’s just me posting from my old art books.

JH: It feels like a digital moodboard, which ties into the video game rollout for pink lightning, too.
MJ: Corin and I are really into games, so we thought it would be sweet to have a song at the end of a game. We looked at examples like Myst and P.T., which we thought felt like a simpler way of engaging and interfacing with the internet. We wanted to put it on Reddit as an easter egg for fans who were still paying attention even though we’d said nothing for five years, but it gained a life of its own on Discord. We posted it there, and then maybe three or four people started working together to complete the game – it was so cute. It was easy to come back after so long with something like that because it was kind of funny and so hard. It felt like playing a trick and making people question whether it was really was us behind this, so I’m really grateful that fans actually made it work.

“The record then became its own family: a mythological one, with all these archetypes that came from my feelings.”

JH: Each track on WOMB feels like it exists in its own world, but can you talk a little about the overall lyrical themes?
MJ: I didn’t realise until I listened to all the songs back, but there’s a lot of correlation between light and dark, a lot of water and matriarchal influence, especially in femia and i like the devil. It’s not necessarily just female though, it’s this real definition of care and nurture. It’s also about how the world’s perception of femininity is… difficult. So I guess it’s about pain, suffering and the anger I feel towards the world. Making art out of that is just what happens, so it became about trying to find contentment and something beautiful in that.

JH: It’s also notable that you released another eternity in 2015, when the global political landscape was incredibly different.
MJ: Exactly, 2015 was the end!

JH: Now we’re living in the new end. Have you seen the music industry becoming more political since then, and have you personally felt pressure to make overt political statements?
MJ: I understood the pressure at the time, and it seemed like nobody really made or released anything for a long, long time. I don’t feel pressure to say anything specific, I just think everything is fucking political. Whether or not I buy from the organic section is political, so is where I buy fabric to make clothes. Those decisions have a lot more weight than I noticed before, so it’s important for me to think about my lifestyle and how it affects other people. I’m more inclined to write about that: firstly how I feel about something, and secondly how I imagine other people must feel, because you’re never really the only one.

“I will say that rubyinsides is straight-up about how the wealthy are destructive, and everyone should have healthcare… so yeah, I was mad at billionaires when I wrote that!”

JH: For sure, there’s definitely increased awareness of collective responsibility.
MJ: It’s like a functioning body: it works together and nothing is unrelated. I will say that rubyinsides is straight-up about how the wealthy are destructive, and everyone should have healthcare. We have it in Canada, but in the States it’s so maddening. So yeah, I was mad at billionaires when I wrote that. I wasn’t even trying to say anything to anyone. I was just mad.

JH: I know you’ve talked about gender politics in the past, too. We hear so much about feminism, empowerment and visibility, but usually through a pretty corporate or surface-level lens. Have things changed behind the scenes?
MJ: There’s more unity between female and non-binary artists making music who understand how it is to exist in this world. There’s more communication there, which I can really appreciate and is so necessary for continued change. But also, the power still rests in the same gross hands. It’s not being handed over. It’s hard because the music industry is aware of it. A few people have had their heads cut off, but it’s still at the point where people are just being careful because they want to keep their power. They say the word ‘feminism’ and it seems like they’re aware, but that doesn’t mean they’re doing anything to change the landscape. It’s still extremely sexist basically, but the people who will demand the change are communicating more and becoming more unified.

JH: WOMB feels like a celebration of femininity, even down to ‘feminine’ art forms, like the embroidered lyric video for peacefall.
MJ: I have a lot of domesticity about me! A lot of those themes do come from me directly. With the peacefall video, we had this amazing, terrible journey of trying to make something while the COVID-19 situation kept worsening. It became increasingly stressful, so the weekend before the release, Corin was like, “Oh, you should stitch the lyrics on your machine.” It was this very last-minute idea that we did in quarantine. But then I was like, “How do we add light to this? Oh sure, we burn it at the end!” Doing that video did finally make me good with the sewing machine, though.

JH: You mentioned making your own clothes, right?
MJ: I started sewing because my mom did, basically. I wanted to make clothes that fit me in a way that clothes I found in stores didn’t, so I started when I was about twelve. It was something I thought I would do before music happened. I was going to sell my little home-made clothes with crooked stitching on purpose at Lost & Found, which is this curated vintage store in Halifax. I sold things there at some time in my past, and I made a bunch of these really funny tank tops for a store in Edmonton. I’m really careful about clothing waste too, so I save scraps to make a quilt – but it’s growing, and I’m yet to make the quilt. Ultimately though, it’s like with anything, when I’m not satisfied I just think, “Fuck it, I’ll make it myself!”

JH: I know you’ve been working on various projects over the last five years, but was it a deliberate decision to create WOMB between just the two of you?
MJ: We have a studio set up at Corin’s house, and we write, mix and record everything from home. We do want to make as much as we can on our own because it’s the only way we feel gratified; like it’s ours. It’s easy to get into a room with a bunch of people and write a song that doesn’t feel like yours at the end. We already compromise enough between the two of us, we didn’t need any more of that.

“A few people have had their heads cut off, but it’s still at the point where people are just being careful because they want to keep their power. They say the word ‘feminism’ and it seems like they’re aware, but that doesn’t mean they’re doing anything to change the landscape.”

JH: Was there any song that took a particularly long time to come together?
MJ: There were two: sinew and stardew. Sometimes a song just takes a long time, and that’s okay. I wrote the chorus of stardew early on, but sometimes when you get a part it becomes intimidating, like you have to match it. It took two and a half years to come together. Every month I would try and then try again, but we knew from the start that the song would be released and go on the record, even though there were times I lost hope. It was mind-blowing when it did come together, though. The opposite happened with sinew though, the verses came first.

JH: Finally, what do you want people to take away from listening to this album?
MJ: I was surprised at how comforted I felt the first time I heard these songs altogether, so the first thing I remember thinking was that I really wanted other people to find that comfort, too. I really hope that people find a sense of okay-ness in this album, a contentment. I want them to feel like they’ve found a resting place.

WOMB is available to buy and stream now.