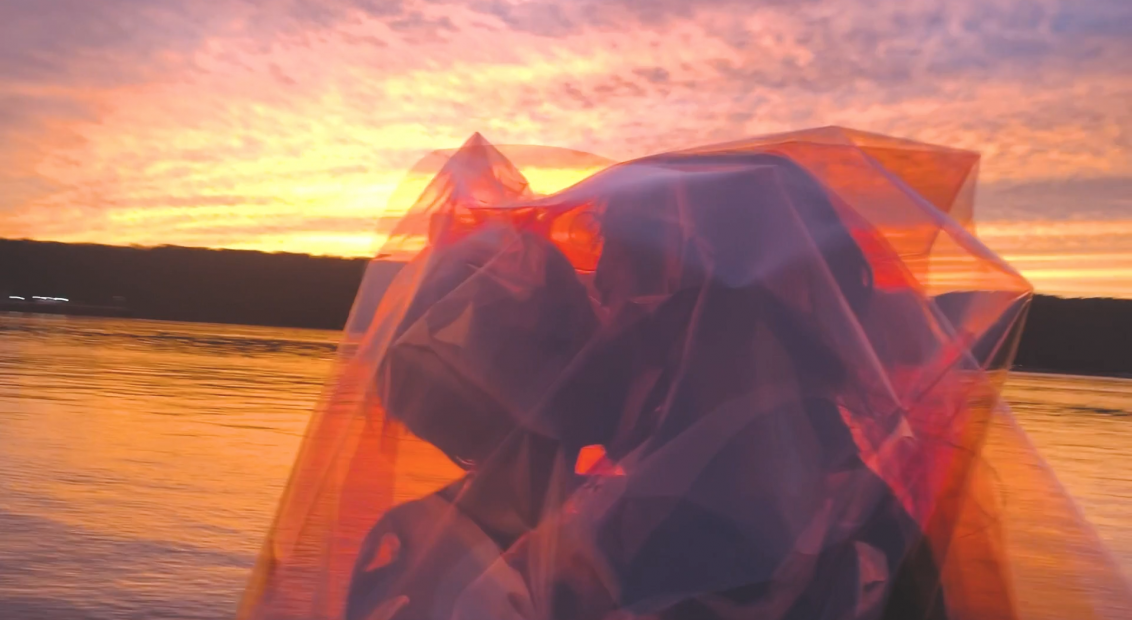 Her Love: musician Alex Ebert in conversation with partner and actor Jena Malone

Shot by the couple entirely on iPhone, the intimate and ethereal visuals match the narrative of the track: as the world revolves around them, Ebert’s attention is fixed on Malone, echoing the track as a celebration of finding that one person you can truly open up to.

Marking the release, the couple sit down to discuss the track and the inner-workings of love; the grit and the glory.

Jena Malone: What’s interesting is that when I first listened to Her Love, I didn’t have the lyrics, and yet I understood what you were saying in the song just through the music, that godly, beautiful love. Then I listened to the lyrics and I realised that it’s full of these beautiful double entendres, starting with golden showers [laughs]. Like everything is about sex and also not, you know? When I first heard it I actually thought you were saying golden child [laughs].
Alex Ebert: That’s why you thought it was about my daughter [laughs]?

JM: I did!
AE: You’re not the only one to say that, Brian also did.

JM: [laughs] I’m glad I’m not the only one. So what do you think?
AE: Golden showers? It’s like literal bathroom talk, those gritty, up-close, cheeky experiences in the sun with a lover, there’s nothing better than that moment. Then also the cheap sort of bathroom talk which also exemplifies what a partnership is about, the beauty of being in love and having those dirty bathroom stall tissues all wrapped up in it.

JM: [laughs] It’s sweet, you don’t hear many people talk about love in that way, the dichotomy of the dirt with the golden beauty. As the song keeps going you push into these angles of like, that’s not real enough, let me show you what is.
AE: Yeah, I think reappropriating desire, beauty and sex, reorientating ourselves… When it’s your romance, it’s the most vivid kind. That’s what I fucking want in life [laughs], that combination of love; the grit and the glory.

JM: That’s it, that’s when you know you’ve reached a certain level of evolution, when you can sort of have one on each hand and appreciate both. What I also like about the song is that in the chorus you’re saying that her love is a ghetto, her love is this and that, and the audience is constantly trying to find the through-lines, like, what is it? But actually it’s all these things at once.
AE: All my life I’ve been trying to be real. I don’t know if I’ve told you, but when I was a kid I would practice a James Dean furrowed brow, like hard-days-work-out-on-the-farm, rebel look [both laugh]. Growing up upper-middle class in the valley, I didn’t feel like I was living a legitimate life, like I was cheating or something. So I manufactured hardship for myself. That journey of looking for real experience, it gives you an appreciation for the cinema of life, in a sense. In every circumstance, the cinema of life is on. Everybody’s life is a glorious epic. The ‘her’ in the song is almost like a struggling girl who’s just living in her cinema, like the rest of us, and it’s beautiful and she’s showered with love, sex and beauty. Like most of our lives, they’re painful and fucked up, but if you get that one moment of close-face love moment, it makes the whole thing worthwhile.

JM: Yeah.
AE: And that’s why I wanted to follow your ass around Italy [both laugh], just watching you walk. We have so many of those amazing moments. 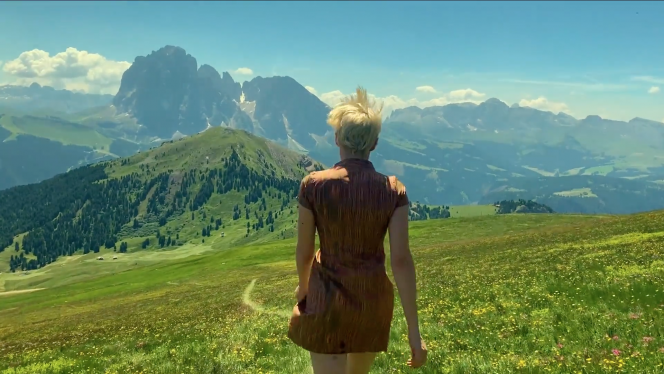 “It takes quite a lot of restraint to strip back instruments, because you want to be like, “Oh, it’d be cool if this went in there,” and, “Let’s try that in there.””

JM: Like you couldn’t paint any more colours into such a divine moment; within the struggle, what emerges is what’s real. The instrumentation on the track is full-blown Nina Simone on one of her finest days, it’s like harking back to a previous era where three or four musicians are following the word of your song. Can you tell me a little about how it was recorded?
AE: Oh babe, I love you. There’s this incredible bass player called Donald Ramsey in New Orleans and this incredible sax player called Brad Walker. Donald is just like this wild stallion of pure talent, he’s a supreme musician. I had the beat and essentially guided him through the track as he freestyled. There are only really four elements of the song, which is a constraint I love to explore. Theoretically, I’m a musician and should know what my best key for singing is, but I so often just start writing without that in mind and it just so happened that this song is right in my sweet spot. In the future I should probably try and write for myself [Jena laughs]. It takes quite a lot of restraint to strip back instruments, because you want to be like, “Oh, it’d be cool if this went in there,” and, “Let’s try that in there.” In this case, the song almost didn’t need anything, it was amazing. I don’t know why that happens sometimes, I think it has a lot to do with Donald’s bass playing, it’s almost like a duet between me and the bass.

JM: The coolest thing I noticed about the seed of the video is that you’re so unaware and yet also self-aware. I remember when we took a trip to Venice together and we were roaming around the streets filming, then we came back that night and you were like, “Babe…” and you’d already put the song over the film of me walking down this alleyway.
AE: Venice has those narrow walkways, you get an amazing forth perspective of the walls as you walk down, I’m such a sucker for that shot.

JM: But I think you filmed it and then edited it as we were walking, then maybe ten minutes went by and you said, “This looks so good with the song!” and I was like, “What’ve you been doing back there?” [laughs]
AE: Good old iMovie. Courage can be quantified in some way by the space between the idea and the acting of the idea – how ready you are to throw caution to the wind. I was in a safe space, I was with you, one of my favourite artists of all fucking time, the most brilliant poet I’ve ever met, so it was a safe place. The whole premise of art and poetry is a willingness to fail, it’s tightrope walking. Around you, I feel entirely safe to fail, not to mention that we went to the most amazing places, finding that waterfall, we literally just pulled up. You spotted it right?

JM: Yeah I just saw it.
AE: We pulled over and it just turned into one of the most beautiful, fucking…

JM: I got to have the mermaid moment of my life.
AE: Totally, talk about a golden shower – the god’s just peeing all over you [laughs]. Oh my god, that was incredibly beautiful. I got in too but I thought that rocks were going to fall on me from above [laughs], like those games where you put a coin in and it pushes other ones off the edge.

JM: I’d be happy to go that way, like a freak accident, back into the Earth. We shot in some really beautiful places.
AE: We got back from Europe and didn’t do anything we were meant to be doing…

JM: Our relationship kept getting in the way [both laugh].
AE: Then I flew to New York and I had this idea of… I had some acetate, it was like camera gel or something, and I put it over me and took a photo. I thought it was so cool the way the light bounced off it and yet it was also like a visage, and I just thought that I wanted to make out with you [laughs] but have it shrouded and reflective of our surroundings. I almost think we should sell those things as make-out tents, like if you really need to make out or have sex in public, just wrap yourself in these [laughs].

“The whole premise of art and poetry is a willingness to fail, it’s tightrope walking” 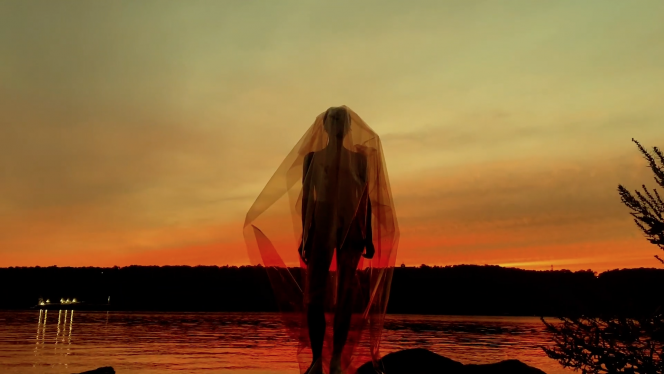 JM: It was an amazing story: the sun was going down, we didn’t have anywhere to shoot, we were just picking places on Google Maps. Then we got to this amazing little place near the Cloisters in New York and there was a dock where these women were doing amazing aerobics.
AE: I was ready to give up, the sun was going down, but you kind of Jedi-ed the whole thing.

JM: That’s my favourite thing to do, manifesting things. We shot it and then it was like, “Ok, let’s get naked, we have to do that.”
AE: Of course.

JM: When we had that material around us and we were both naked, it was incredible and really did encapsulate the song; the dirt and the glory. Something so human but also so abstract, it transcends being taboo and allows it to be beautiful. We went over to talk to those guys after and they totally saw the whole thing…
AE: I’m sure the dance exercise women did too. We were so happy afterwards…

JM: Some dude was having an album launch party on Youtube [laughs].
AE: To create with you is the dream. Like I probably wouldn’t have gotten naked, it didn’t occur to me, but of course we had to.