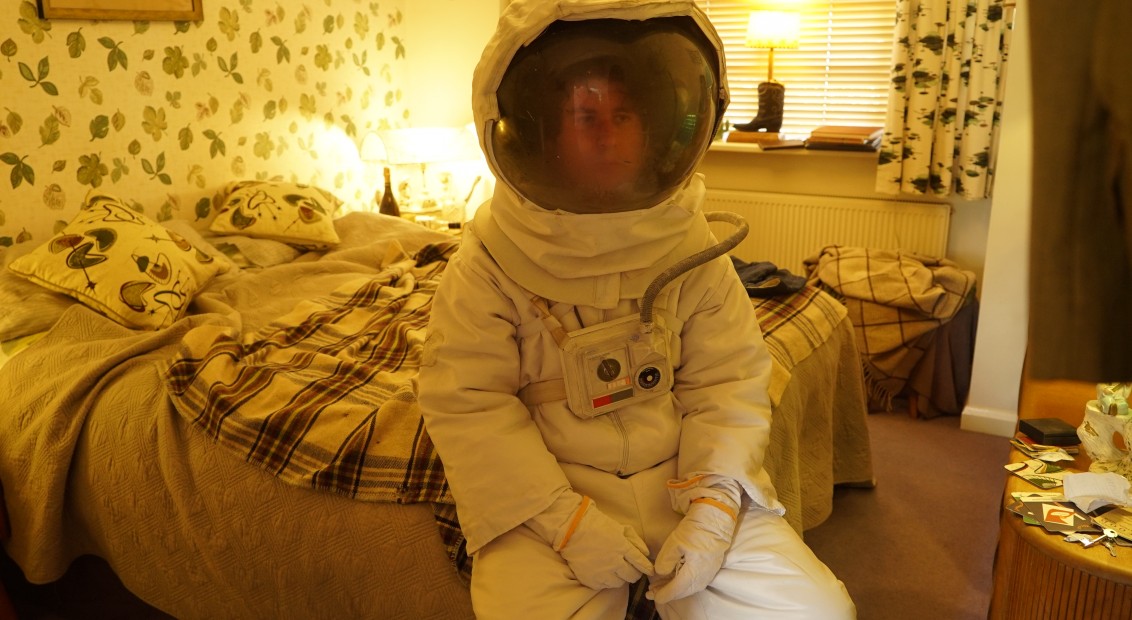 Inspired by Edward Hopper’s realist paintings, Americana, animation, mazy shopping malls and Lynchian worlds, Jacob Read’s debut record, Air Con Eden, has been stewing and fermenting for years. “I don’t like to do things when people expect me to,” says the South London musician who began his solo project back in 2012, “[with this record] I wanted to wait until I’d gotten really old and people had forgotten who I was.”

Having hit boiling point, the record is ready for release this September; its influences fully fused and sounds truly brewed. Featuring contributions from producer Tom Carmichael [Fat White Family, Childhood, Kendrick Lamar] and Pulp’s Steve Mackey, the result is a dynamic blend of studio and domestic recordings. As Read details below, the album is an assimilation of personal references, interests and moods, from his foray into the world of cinema in Somerton Beach, to his analysis of nefarious shopping malls in Midnight Snack. In a time and place where everything is reactive, Jerkcurb’s musings chill comfortably as lounge music to live by, and he’s at peace with that. 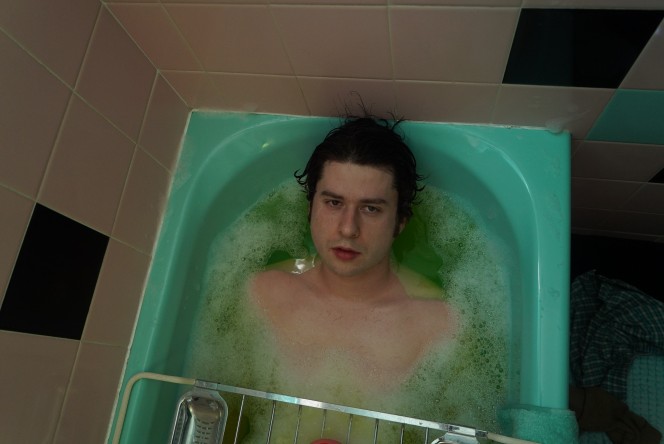 Clementine Zawadzki: We caught up a few years ago, but a lot has happened since then. Your debut album is out next month, what took so long?
Jacob Read: I wanted to wait until I’d gotten really old and people had forgotten who I was. It was quite important to take the time and wait until that time had passed. I don’t like to do things when people expect me to. But also, it became a different kind of album because I took so long to make it. I had to want to do it, rather than feel like I should do it.

CZ: How much did your sound change or songs evolve during that period?
JR: I guess with anything creative you kind of have to have a deadline, you have to enforce some discipline and boundaries, otherwise things do go on. I probably would still be doing it now if it weren’t for my manager telling me, “This has to get done.” It started as a solo project away from the other bands I was in, so because of that I had to feel like I was producing it myself and controlling every aspect of it as much as I could, otherwise it didn’t really feel like it was mine. So there was a good number of sessions I did earlier on that I did with other producers, which although they might have been better, I just knew it wasn’t me, so I didn’t really use them. I learned a lot from it, but it took a while to know what I was trying to say. The thing that’s coming out feels genuine to me. I don’t know if that’s good or bad – it’s probably bad.

CZ: Why do you think it’s probably bad?
JR: I don’t know. Maybe for the next one I’ll collaborate more and make it more upbeat. It’s quite miserable and self-indulgent, but I guess everything comes across that way when it’s your own.

“I was also one of those smug kids that had some enjoyment of not being into the same things as everyone else.”

CZ: Why do you think you lean into the melancholy?
JR: I guess because it’s a solo project, it tends to be more of a therapeutic thing. You do it when you feel like you have something to say. The other band I’m in [Horsey] is really fun and because it’s a collaborative band there’s almost no space to make it too serious or melancholic. I just had to shut myself off from everyone else for a bit for this solo work. I usually scribble something down or pick up a guitar, all those clichés. I think most of my interests are not miserable things. I do like expressions of happiness. I guess it’s just one part of me.

CZ: Listening to Air Con Eden, it didn’t come across as miserable, but full of curiosity. For instance, the way you take inspiration from the Gruen Transfer…
JR: Yeah, I love escalators. The idea of continuous movement is really interesting to me, like this purgatory, infinite slow pace. There’s something quite weird about it. I don’t really know why I like shopping malls, but it’s something that’s always interested me. I’ve been researching how the architecture and layout of malls are designed so you go in and forget what you’re buying and what you’re meant to be there for, you’re never quite sure where the exit is and where you are. That sort of hypnosis is not really a pleasant thing, but it’s not unpleasant, you’re just sort of lulling. That sensation of being half-conscious inspired the music. If someone says they listened to my music and fell asleep or can’t quite recall it, I think it’s quite a nice thing because I’m not trying to say anything too political and it’s not like caffeinated music for when you wake up in the morning.

“If someone says they listened to my music and fell asleep or can’t quite recall it, I think it’s quite a nice thing because I’m not trying to say anything too political and it’s not like caffeinated music for when you wake up in the morning.”

CZ: How do you interpret the past? Because everything we know about the past is just someone else’s interpretation. We don’t have a true account of anything…
JR: Exactly, that’s a really good question. Both of my parents are artists so I grew up with a really strong reference point to 80s and 90s paintings – my mum’s American so I used to go to the States a lot and artists are considered storytellers there. I’m also Jewish, but I grew up in a place where I didn’t know any Jews, so there was this identity to something that was outside the present day. A connection to something that I don’t encounter on a daily basis. I also think everyone’s a product of their own environment. I remember watching David Lynch films, and Stand By Me, and I remember watching that when I was about thirteen thinking, “Ok, I want to dress like those guys and I only want to listen to Elvis.” I was also one of those smug kids that had some enjoyment of not being into the same things as everyone else. 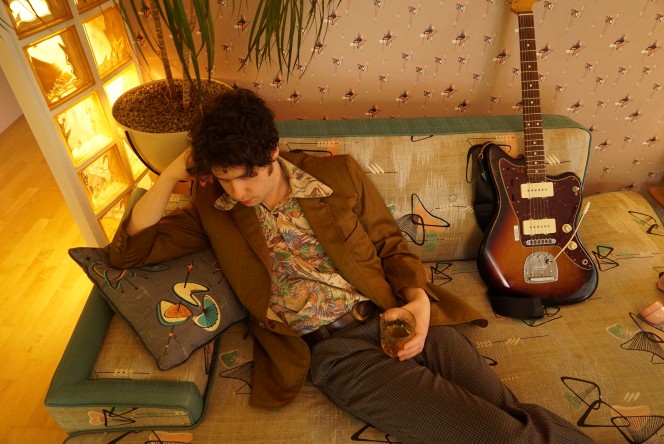 CZ: What can you say through art that you can’t through music, and vice versa?
JR: Maybe the fact you don’t have to ‘say’ something with either of those things. You could just ‘suggest’ a feeling or a mood. You can tell a story through a picture and you can tell a story through a song, but they’re going to be different kinds of stories. You can be abstract with both – they’re so similar. I’m not a trained musician, so I’m not technical in any way, I don’t come from a musical background at all, so my relationship to music comes from an exploratory ear, sort of as a way of seeing things. So that’s probably more related to art. But I did study commercial animation and I worked as a commercial animator, so I know the side of using art as structure and a product, but what I make is an expressive thing.

CZ: How do you find expressing yourself in a live environment?
JR: Terrifying. For years and years, I did it on my own. I kind of liked being restricted – just me and some gadgets – but I wore that out because I became too comfortable with it. I got lazy and didn’t really mix it up, so I got a live band together. I know a lot of musicians and really talented people, so that helps a lot. I had to stop playing live to make the album, I just found it hard to do both. Now I have these tours booked for October and I’m trying to find people to be in my band, so I’m a bit nervous because I don’t know what it is. The actual experience of playing live is almost always rewarding.

CZ: So if someone picks up this album in 50 years time and tries to work out what 2019 was all about, what do you think they’ll make of it?
JR: I live in a time where I’m exposed to so much history. That’s maybe the most positive part of living in this era, how widespread communication is. I’ve become friends with people from all around the world, and it means a lot when someone personally reaches out. I wouldn’t do that to someone else unless I really liked it. The album? I hope it at least stands the test of a bit of time.