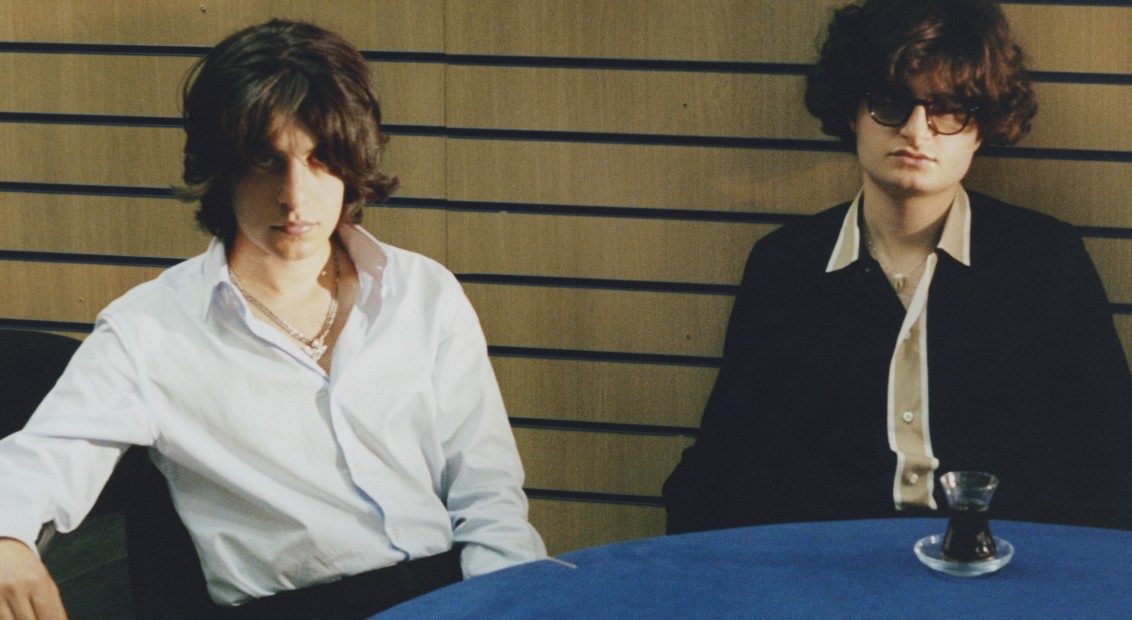 A Nation of Bloodsuckers

A Nation of Bloodsuckers

Having released Eating People on their debut AA-side single – along with Rio – at the end of last year, the pair return with a new track A Nation of Bloodsuckers, and a debut EP wrapped and ready to hit the shelves on 14th September. Alongside the previously released songs, this new four-track features two songs Ronnel wrote one night for his boarding school talent show. “Needless to say, I won,” the frontman adds.

With muted fuzz and Ronnel’s soft yet menacing vocals, it’s evident from first releases Eating People and Rio that this pair walk to their own beat and dance to their own tune. Their writing so far is a union of religion, mythology and realism: faith in something greater adjacent to having faith in oneself; a conflict of control that is both exerted and abandoned in their own work. Eccentric and electric, Sons of Raphael are here to shake up the norm.

Clementine Zawadzki: Being brothers, what was your relationship like growing up?
Ronnel Raphael: Very good, Loral took care of me; he paid for my tadpoles’ funeral and decorated the house in velvet.
Loral Raphael: My brother Ronnel, his arms are like rivers, overflowed with kindness. If you cross him, however, you will live in a place of darkness, under the surface of earth.

CZ: When did you begin to make music together?
RL: I was writing a lot in boarding school, I turned my boarding school dorm room into a studio and started recording on this tape machine, but it wasn’t until the Eating People video that it became clear that we were going to start a band together.
LR: I filmed that video with no intention of it having any continuity. I thought it would be interesting to document our first attempt to perform live, and that first attempt took place at the boarding school, during morning service.

CZ: Your lyrics deal a lot with religion and ideologies. Where does this come from? What’s the inspiration behind it?
RL: Religion offers practical implications even in the age of space travel. I look up to Jesus and the prophets, not from a religious perspective but as a model of success, how what initially began as a marginal movement transcended cultural boundaries. What we are about to do is no different.

CZ: Would you say you’re philosophical?
RL: I am much more fond of theology, although the two overlap.
LR: Our father always says, “Be good to rock ‘n’ roll and rock ‘n’ roll will be good to you.”

CZ: What do you have faith in above all else and why?
RL: God. I’ve felt Him out alone in the desert at night.

CZ: Eating People and Rio are also on your debut EP. What can you tell us about the other tracks?
RL: Both other tracks, A Nation of Bloodsuckers and Jesus, I wrote one night for a talent show in boarding school. Needless to say, I won.

“I look up to Jesus and the prophets, not from a religious perspective but as a model of success, how what initially began as a marginal movement transcended cultural boundaries. What we are about to do is no different.”

CZ: What’s it been like being photographed by Hedi Slimane?
LR: A wild escapade. They asked us if we could meet in LA the same day, the problem was our first European tour was beginning in 48 hours. We were supporting Charlotte Gainsbourg and the first show was Hamburg, Germany. So we could only go to the US for 22 hours to make it to that show in time. After a twelve-hour flight we arrive just before midnight. Before we went to the hotel our driver took us to a drive-through, milkshakes and burgers in the Cadillac, AMERICA. We went on a night out in West Hollywood, met Hedi Slimane in the morning, who was extremely kind and genuinely culturally knowledgeable. It was great spending the day with him driving around LA, and then we went on another twelve-hour flight and arrived in time to play the show. A lot to do in less than 24 hours.

CZ: Would you say you’re old souls?
RL: Honey, nothing external can restrain the soul from existing.
LR: I like to stay at home. If you leave your house there are problems to follow. Every time a little conflict emerges people immediately take to the streets. Whether it is for celebration or opposition, that is the initial reaction, and I believe that going out to the streets just produces further dissension, and therefore people should just stay at home. If you stay at home, you avoid interaction and thus avoid conflict.

CZ: When you aren’t making music, what do you get up to?
LR: Loan sharking.

CZ: I understand you don’t really listen to music or attend gigs, so how does music resonate with you?
RL: I don’t like things that unfold in time, I don’t need to watch shows or play records. I have music playing in my head constantly.

CZ: There’s a real ferocity to your songs too, even in slower moments. Where does that come from?
RL: The simple cutting belief that rock ‘n’ roll should be dangerous.

“Both other tracks, A Nation of Bloodsuckers and Jesus, I wrote one night for a talent show in boarding school. Needless to say, I won.”

CZ: Loral, you’re a dab hand at directing. What about film interests you? What inspires you?
LR: Thank you. It is exactly like music, it is all about emotion. That is the only thing I am interested in and my only motive. It is the only thing that survives time. If something makes me feel, and causes an emotional reaction, then it is great.

CZ: Where would you like to take your music?
LR: To the savage beasts.

Sons of Raphael‘s debut EP A Nation of Bloodsuckers is out September 14th via Because Music.
The band play at Thousand Island on 21st September.

Tagged with: Sons of Raphael Read more about: London Show me more: Music