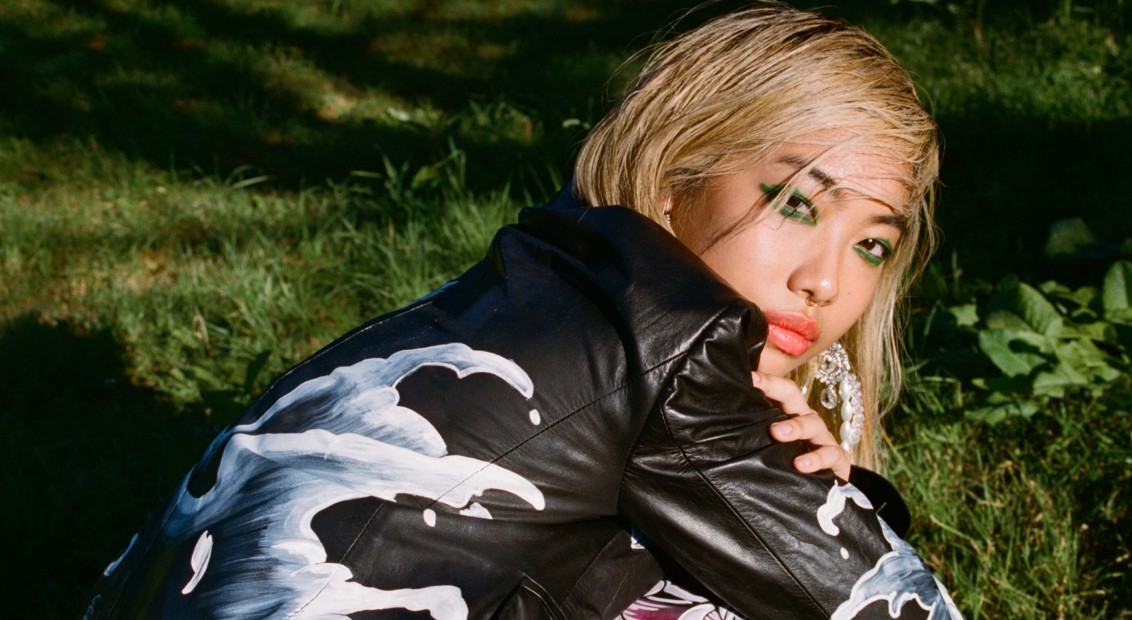 When Japanese musician Rina Sawayama requested one of Hannah Dang’s graduate collection designs to wear at a red carpet event, it was something of a dream-come-true moment for the CSM fashion student. “I always kind of envisioned her wearing my clothes, she’s like the perfect fit model for it,” Dang tells us below. “I love Rina because she’s similar to me in a sense. She’s Asian and she’s from London and she’s trying to break into an industry where there’s not a lot of Asians.”

London born-and-raised, Dang descends from Asian heritage: her granddad emigrated to England during the Vietnam War, sacrificing everything he had in communist Vietnam for freedom and a better future for his family. Freedom, it’s a value that has stuck with Dang and is a concept she took as the starting point for her graduate collection. “It was rooted in tattooing, the whole artistry behind it and how, in Asia, it’s pretty taboo and tattoos are still frowned upon.” The result is a bold collection built around hand-drawn patterns and traditional Asian motifs that flow into each other across latex fabrics that hang close to the body like a second skin. Repurposing a traditional Asian aesthetic in tune with a 2018 attitude, it’s this M.O. that feeds Dang’s creativity and shapes her ethos: “I found that if there is a stereotype, wear it.” 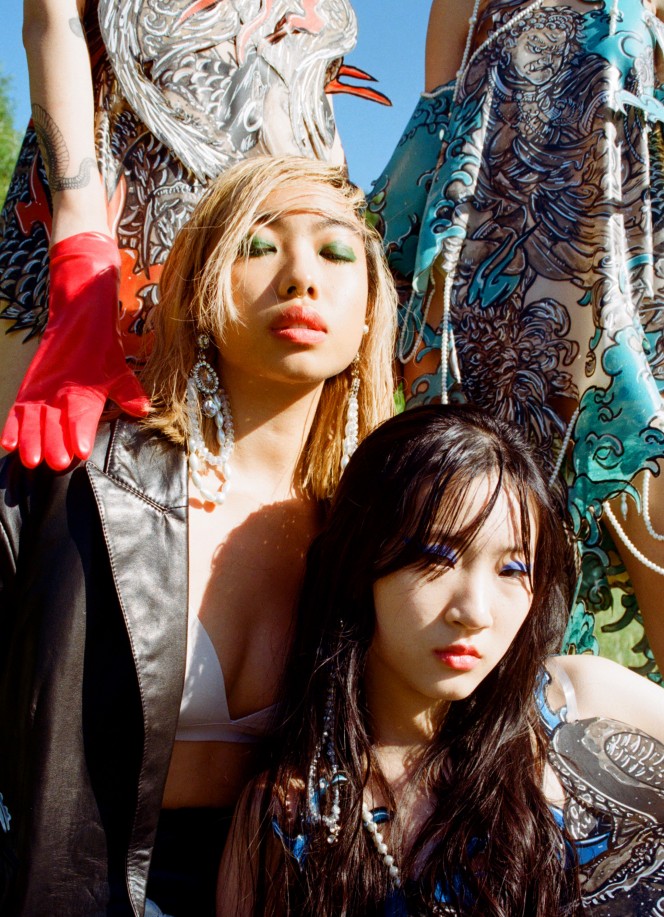 Lindsey Okubo: It’s interesting because technically you chose the safe route and ended up really enjoying it which isn’t always the case. When did you realise that you actually loved fashion? I feel like you never feel totally satisfied knowing that like you’re doing something for the reason of it being “safe”.
Hannah Dang: Yeah I think Central Saint Martin’s did really push the boundaries because there isn’t like a structural way of learning at Saint Martins so I had the freedom to do whatever I wanted. I thought the fashion industry was like, “You have to do this, this and this”, and it all depended on what was in season now, but what I found was that it was more about trying new things and experimenting, which I liked. It was about freeing up your instincts and going with what  you feel. Reasons and rules will only hinder or restrict you. I think there is beauty and originality in spontaneity, especially in the creative field.

LO: I think freedom means allowing yourself to be honest with creation, which takes a lot of courage. Your a lot of your work seems to draw influence from your Asian heritage, what’re bringing to the table in terms of staying true to yourself and your roots?
HD: I remember always thanking my late granddad for immigrating to England during the Vietnam War and constantly joking to him that I would probably end up selling Pho by the Mekong River if it wasn’t for his decision to move. My family and I are forever grateful to him; he sacrificed everything he had in communist Vietnam for freedom. I guess that’s why a lot of my work is to dedicated to my family and why freedom is so important to me. Freedom is power. The power to do whatever the hell you want, when you want without any reasons or boundaries.

So for my final degree collection, the concept was rooted in tattooing and the whole artistry behind it and how in Asia, it’s pretty taboo and tattoos are still frowned upon. I did a lot of research and found that one thing lead to another. The whole latex thing was done because I really wanted to use a fabric that mimicked the skin and so it looked like an actual tattoo if the person was to wear it. On the dress Rina wore, there was a portrait of my mom in it and my mom was born in the year of the dragon.

LO: Oh my god! I didn’t realise that was your mom.
HD: It was a whole homage to her, the whole dress was dedicated to her. I asked her like mom, if I could set you up into a tattoo, what would you be? Everything that reminded me of her I put into the dress. 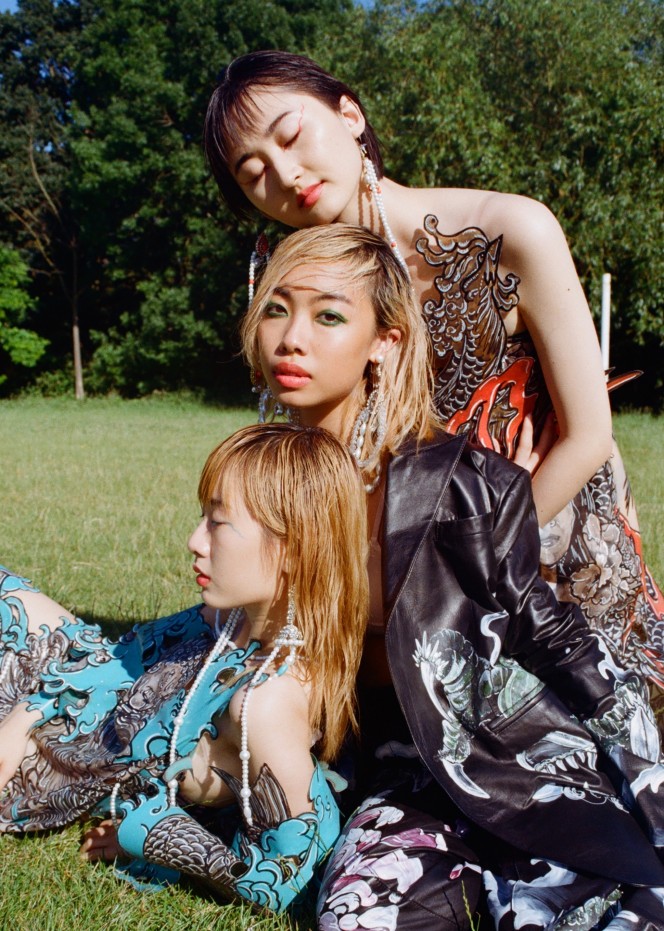 LO: It’s an interesting time to be an Asian designer because all these brands, like UNIF or I Am Gia from Australia are doing all of those dragon tops, or whatever it is and it’s interesting to see people buying into our culture to the point where it becomes kitschy and mainstream. What’s your take on this? Especially because the use of these elements is so personal to you, do you at all feel like you’re taking ownership of this narrative?
HD: Yeah the whole mesh top thing is really saturating the whole industry and is fast fashion and that’s like a whole topic in itself and if I get into it, we’re gonna be here forever [laughs] I don’t want to say that I want to take ownership of what I’m doing, I’m just doing what I want to do and what I like, it’s not that deep I guess; it’s deep but I don’t want people to look into it that much. I don’t think I’m the first human on planet earth to discover the beautiful marriage of fabric paint and latex. Or am I? [laughs] I think because it’s still the early days for me, I don’t want to take ownership until I’m fully content and have sort of established myself within the industry? I’m still a student and I want to embrace this whilst I can, without the whole grow-up talk on “ownership, legal stuff and copyrights ”

LO: As you’re nearing this post-grad stage of your career, what are the pillars of what your brand stands for and on as you navigate and become a part of the industry? I know everything you do is hand-painted.
HD: I really want to continue this whole painting thing, it’s really time-consuming but people can’t recreate what I’m doing. Everything is hand-painted and there is a quality in hand-painting that you won’t be able to mimic. Yet in terms of money, it won’t help me and it won’t sustain my life in the long run I guess and that’s why I’m struggling to find a balance as well. It’s really scary because eventually I might start printing stuff and that’s something I don’t really want to do. If I was to build a brand, a lot of it would be exploring painting and the craft behind painting. 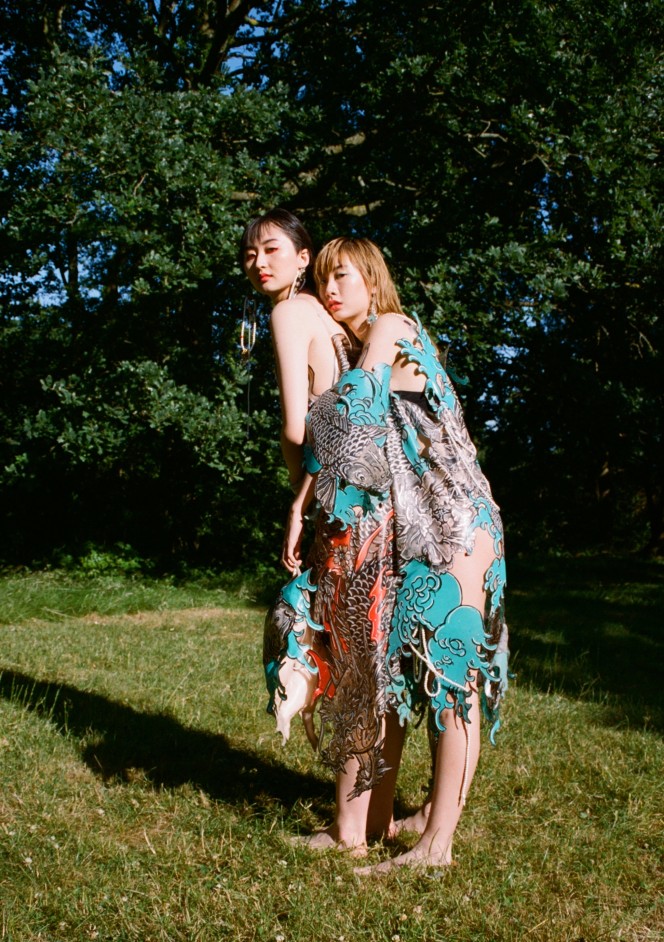 LO: Do you think you sometimes need to sacrifice creation’s purity for sustainability? What exactly do you understand balance to be?
HD: Yes, I think sooner or later a situation will arise and I would have to sacrifice my creation’s purity for sustainability, in order to keep up with the demands and deadlines. I only have a pair of hands and a bad shopping habit I need to feed. However, I’m going try, going to try not to sacrifice creations purity in order to sustain the industry’s demands. The balance for me would be creating and getting my stuff out there as much as I can whilst staying true to my techniques. Also, taking time to enjoy the craftsmanship and process behind each garment.

LO: Right and as you’re coping with that fear, what’s your next move?  I feel like more and more people and young designers though are just doing their own thing. It’s this feeling of being ready which is tied to this sense of identity and the platforms we are given.
HD: I feel like I’m in that really sticky position where there’s like a devil on the side telling me that, oh you should just go do what you want and just go and push on your own brand; then there’s like the angel on my other shoulder and then she’s telling me that, realistically you should get a job and work in the industry because yeah, the whole business aspect comes in and I’m still blindsided to it, I don’t know anything about it. There’s a lot of young brands in London as well and they don’t last long. They’ll do Fashion Week for two years and then eventually, it will fall off and you end up looking for a job. It’s really scary.

LO: It’s interesting that you’ve pitted doing your own thing as the devil, and finding a job and being “practical” or “realistic” as the angel. More so I think it’s building, it’s building your brand, it’s building the community around your brand. Even for you with Rina wearing your dress, it’s cool because you’re able to like position yourself in that way and surround yourself and your brand with exactly the people who you feel like understand it.
HD: Yeah, I love Rina because she’s similar to me in a sense. She’s Asian and she’s from London and she’s trying to break into an industry where there’s not a lot of Asians. I always kind of envisioned her wearing my clothes, she’s like the perfect fit model for it. Growing up, I was the only Asian kid in my class so I did deal with a lot of racism but it made me stronger in the sense where I wanted to try to kind of divert the stereotype even more. I found that if there is a stereotype, wear it.

LO: I love the way that you just put it you know, I think more so that’s what I meant when I mentioned the idea of ownership, it’s ownership over your own narrative.
HD: Yeah I think what I learned so far is to trust your instincts and there are no rules and if there are rules, they should be broken. There isn’t one way to do it and there isn’t one way or one path to do things.