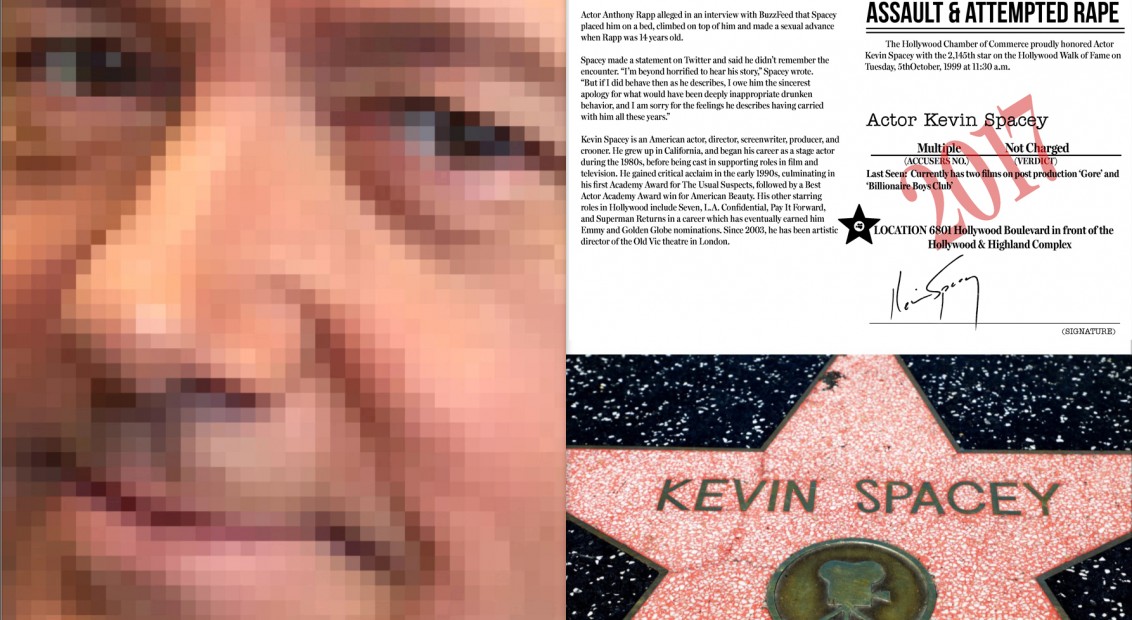 In the wake of #metoo, this photographer is calling out Hollywood’s alleged sexual predators

“I used to live right by the Walk of Fame and the people who roam on those dirty streets in character costumes always intrigued me. I had no real idea of the actual past of the honourees but when the #metoo movement shook the media, I started to research the crimes committed towards women in the entertainment industry – and the Walk of Fame became a kind of dark metaphor for glorified male ‘stars’.”

Photographer and filmmaker Robert Lang’s new photo book takes readers on a walk from Sunset Plaza into hidden truths behind well-known Hollywood honourees. Though people flock in their millions from across the world to the star-spangled sprawl, there’s an increasing demand for the walk’s committee to consider the removal of a number of named celebrities accused or found guilty of sexual assault, harassment, domestic abuse or even murder. The project sets out to wipe the polish from the pink marble with cold hard facts, calling out iconic celebrities such as Alfred Hitchcock, Marlon Brando and President Trump, spurred on by the recent disgraces of producer Harvey Weinstein and comedian Bill Cosby.

We chatted to Lang about the genesis of the project, how to tackle those names accused and not proven, and the attitude of the committee, who are currently refusing to discuss the legibility of the stars despite the pressure to pay respect to victims. 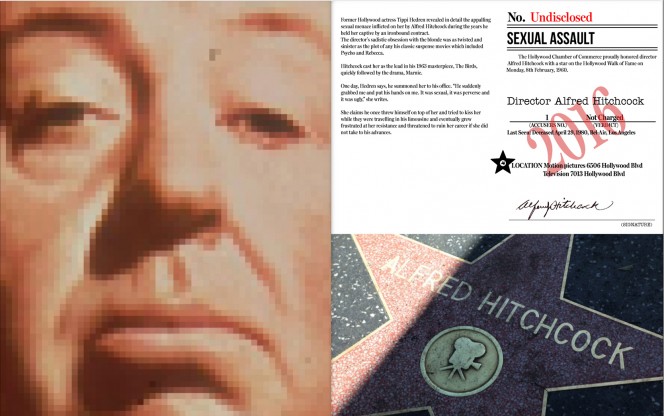 Robyn Sian Cusworth: What made you want to incorporate the discussion on sexual harassment and inequality in Hollywood in your photography?
Robert Lang: I’d say it’s a duty as a photographer to document the times were in. It’s important to discuss across creative fields and keep the book pages open. A story becomes more powerful when there are images to illustrate the subject matter too. I’m hoping the book adds to the pressure that the Hollywood Commerce are receiving right now, so they will change their stance and remove the stars. It’s to share the knowledge too, many are surprised by the actors and directors who have stars even though they have recently been outed.

RSC: Are there many other people or groups pushing for the removal of stars then?
RL: For sure, recently there’s been floods of requests from activists to remove Bill Cosby’s star. The comedian admitted to drugging women before sex but the President and Chief Executive of the Hollywood Chamber of Commerce, Leron Gubler, released a statement in 2015, cutting it short with, “The answer is no”, to the removal of his star. In this case, establishments such as Temple, Yale and Carnegie Mellon universities all revoked Cosby’s honours after his convictions, so did The Kennedy Center Honors and the Mark Twain Prize for American Humor. So why not the Hollywood Chamber of Commerce?

RSC: How are you going to tackle discussing these topics when they are prone to change? Many included in the book may be found guilty and some may be found innocent?
RL: This is definitely a project that I want to keep open. Pages should be continuously edited and added so that we can access the information correctly and look ahead, to progress from the state that Hollywood is in at the moment. 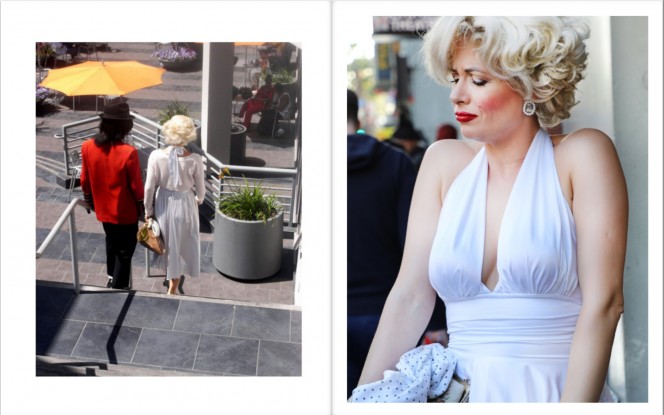 “…now is the time to set an example and they could make their own history to show that this kind of misogyny in the film and entertainment industry is not acceptable.”

RSC: The Walk of Shame really brings home the idea of a Hollywood facade. There’s a whole lot of names on the Walk of Fame implicated in years of embedded misogyny. Did you find any particularly surprising during your research? I was unaware of the open case of the rape and murder of actress Virginia Rappe. It’s disgraceful, really hammered down the fact this behaviour has been let off lightly for far too long.
RL: Yes, it is. Over the course of working on this project for 6 months, it really became clear that men have been let off so easy due to their status. The documents about the rape and murder of actress Virginia Rappe by Roscoe Arbuckle in 1921 and Errol Flynn’s rape of two teenage girls in 1943 are horrendous. Reporters in the media were putting the blame on the women and illustrating as delinquents of society. Outrageously, Roscoe Arbuckle even received an apology letter from the jury after the trial.

The most surprising point I found out is that they both received stars on the Walk of Fame on the 8th February 1960, regardless of what they did in the past. Other honourees who were inducted into the Walk of Fame on this date who are accused in the book include Spade Cooley, Clark Gable, Alfred Hitchcock, Emil Jannings, Louis B. Mayer and Gig Young.

RSC: Why do you think that the Hollywood Commerce are so reluctant to listen?
RL: The Hollywood Commerce’s argument is that if they had to remove one star then there would be no stars left with all of the scandal in Hollywood. They also said “once a star has been added to the walk, it is considered a part of the historic fabric of the Hollywood Walk of Fame. Because of this, we have never removed a star from the walk.” That said, now is the time to set an example and they could make their own history to show that this kind of misogyny in the film and entertainment industry is not acceptable. 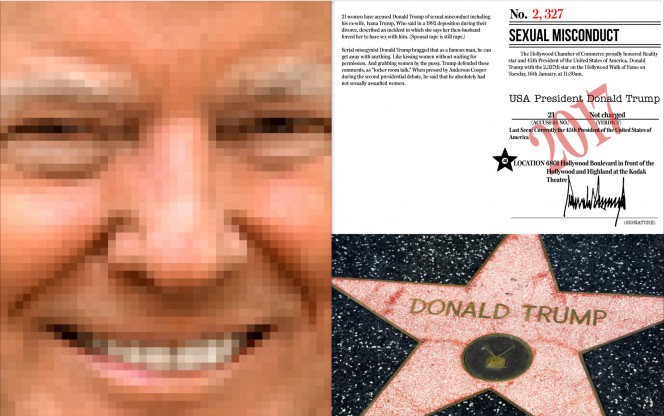 RSC: It’s interesting that you break up scandalous files with popping, saturated images of costumed women, sometimes smiling – what comment are you making here?
RL: It was to add familiarity to the location so that people who had not been to the Hollywood Walk of Fame could visualize the setting. I wanted to take the piece in the direction of the everyday women who worked as character actors on the strip too, they are the hero figures here. Street photography has always been a part of what I do – my camera goes everywhere with me!

RSC: How have you found living in LA when there has been so much going on with the #metoo and #timesup movements? Have you noticed a buzz that change is taking place?
RL: Many of my friends work across the film industry, and ever since the #timesup movement, they have had to attend seminars about working conditions in the industry regarding sexual harassment and the treatment of people on set. I’ve actually heard personal accounts about two of the actors in the book from friends. It really hits home. It seems that they are moving towards a zero tolerance on set now and with time, more people will be exposed. It was just last month that CNN detailed sixteen accounts of inappropriate behaviour and sexual harassment by actor Morgan Freeman. He also has a star on the Walk of Fame. I guess we’ll see what happens there.

Follow Robert’s work here.
Walk of Shame is a total non profit and any money made with it will be donated to the #metoo movement ’