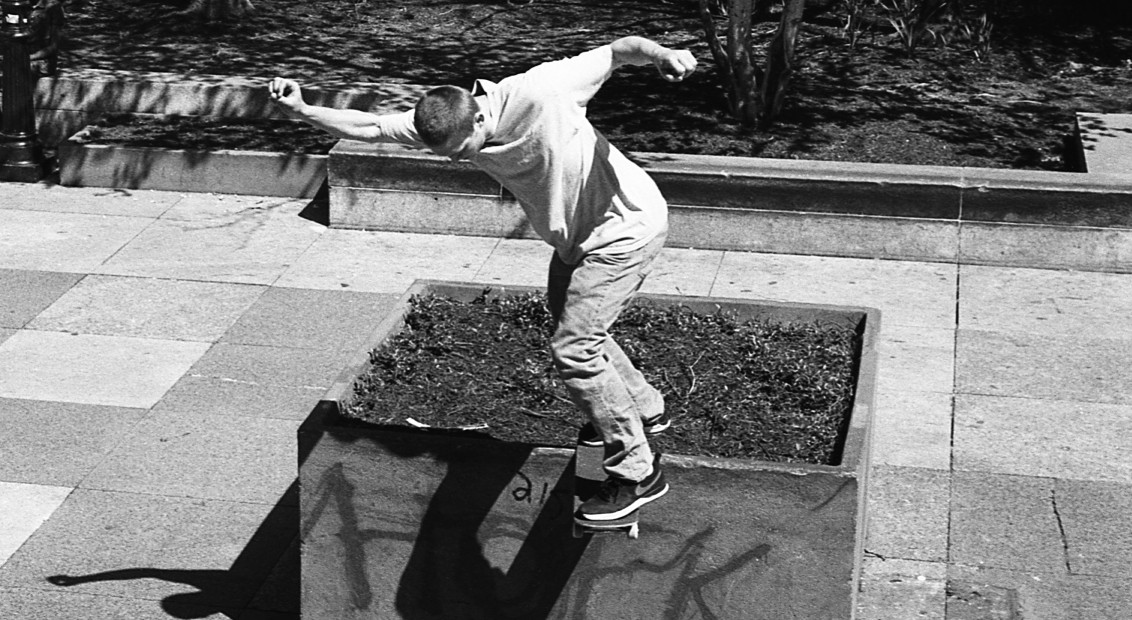 Though skating at Philadelphia’s LOVE park was technically illegal by the 90s, the space had already cemented its status as a skateboard mecca. Serving as a backdrop for countless skate videos and photography, the space was even immortalised in Tony Hawk’s Pro Skater 2.

Sadly, the park met its demise in 2016 due to renovations that will permanently remove the opportunity of skating from the plaza – aka that inevitable wave of gentrification that ignores the community who call it home.

American photographer and skater Jonathan Rentschler’s latest book, LOVE, documents the final three years of the park, photographing its local skateboarders and park dwellers. What began with Jonathan honing his photography skills by shooting his friends soon became a visual tribute as the park’s fate was announced in early 2016.

The book’s 176 pages chronicles the somewhat bittersweet story of the park in black and white photography, from happier times in 2013 capturing the rebellious of the Philly youth to the more melancholic final days, with skaters enjoying a last hurrah of legal skating before its demolition. Here Rentschler talks us through his project and discusses the damaging impact of gentrification done badly. 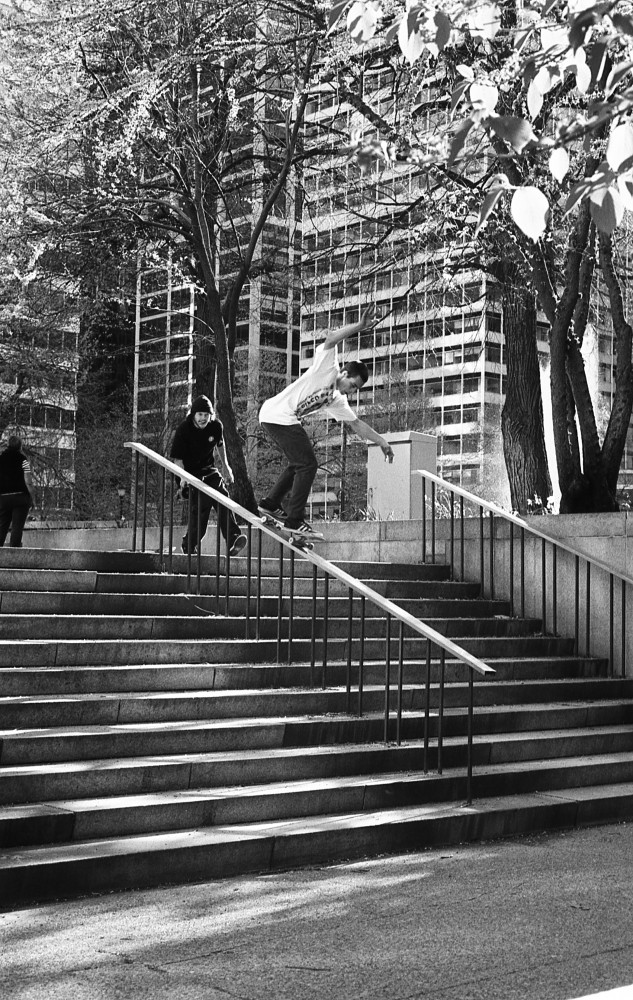 Cristian Burbano: The park became such an iconic space, could you give us a bit of back story and why you think it resonated so much with not only skaters but the people of Philadelphia as a whole?
Jonathan Rentschler: The park was a mecca for skateboarders, in part, due to its architectural design and the marble in which it was made, but also because of the atmosphere it embodied. LOVE was such a wild place, unpredictable, raw, gritty, and dramatic. There was a nostalgic component to LOVE’s allure for this final generation of skateboarders, a longing to be a part of a place that held so much history in skateboarding. A golden era in skateboarding’s past, which was the late 90s and early 2000s. LOVE’s design, with its vantage points above street level, high walls, and nooks, allowed for shady activity right in the centre of downtown Philadelphia. It was extremely lawless, until the cops showed up from time to time.

Cristian: You started shooting the book in 2014, at the time did you know that the park would ultimately be demolished come 2016?
Jonathan: I became interested in photography in mid 2013 and bought my first camera, which I would bring with me on occasion when I would go skating. I never had any intention of making a book back then, I was just learning the basics of photography and shooting photos of my friends and our daily occurrences at LOVE. By the spring of 2014, I had become very passionate about photography and was bringing my camera with me to LOVE everyday. By spring of 2015 I had amassed a small archive of images at LOVE. A narrative began to form as I organised this archive, and not long after rumours began to spread about LOVE’s possible demise I decided to devote myself to photography and see how the narrative would continue to develop.

LOVE from Paradigm Publishing on Vimeo.

Cristian: Any challenges during the three years shooting the project? How often would you visit the park?
Jonathan: I was going to LOVE everyday, either to skate or just to hangout and shoot photos. I had many issues with the police over the three year span about making images of how they conducted themselves at the park. The police became very hostile when there was a camera around, as if they did not want people seeing what was going on there. One image in the book shows a police officer standing over a skater on the ground as he prepares to arrest him, while his partner stares directly at my camera with his hand on his gun. I was constantly warned that I was not allowed to take photos. Other than the challenges with the police, I was often overwhelmed with staying on top of processing and scanning all the images I was making there, as I shot the entire project on 35mm film.

Cristian: Though skating at the park was banned, the Mayor of Philadelphia Jim Kenney temporarily lifted it, giving skaters five days of free reign before it got demolished, what was the energy of these five days like?
Jonathan: That time period after Kenney lifted the ban, which became known as ‘the last days’, were, for the most part, a mess. Not only was it one of the coldest weeks of the entire winter, with temperatures barely reaching the low twenties, but word of the lifted ban travelled fast throughout the skateboard world, creating a free-for-all. The Berrics, hoping to capitalise off of LOVE’s fame, put a $5,000 bounty out on the best trick down the LOVE gap. These circumstances drew in a lot of out-of-towners. It is worth considering Kenney and the city council’s intent on lifting the ban, as if it was going to alleviate the decades the ban existed and the harsh actions of police brutality against skaters. It was a publicity stunt, an attempt to label Kenney ‘the good guy’, and to minimise the fact that the city was demolishing an international skateboarding landmark.

The Last Days also inspired a lot of the park’s OG skaters to come out and pay their respects, which was an amazing thing to see. People who had spent the majority of their youth there in the late 90s and early 2000s. It showed the impact the place had on so many different generations and people.

“The park was a mecca for skateboarders, in part, due to its architectural design and the marble in which it was made, but also because of the atmosphere it embodied.” 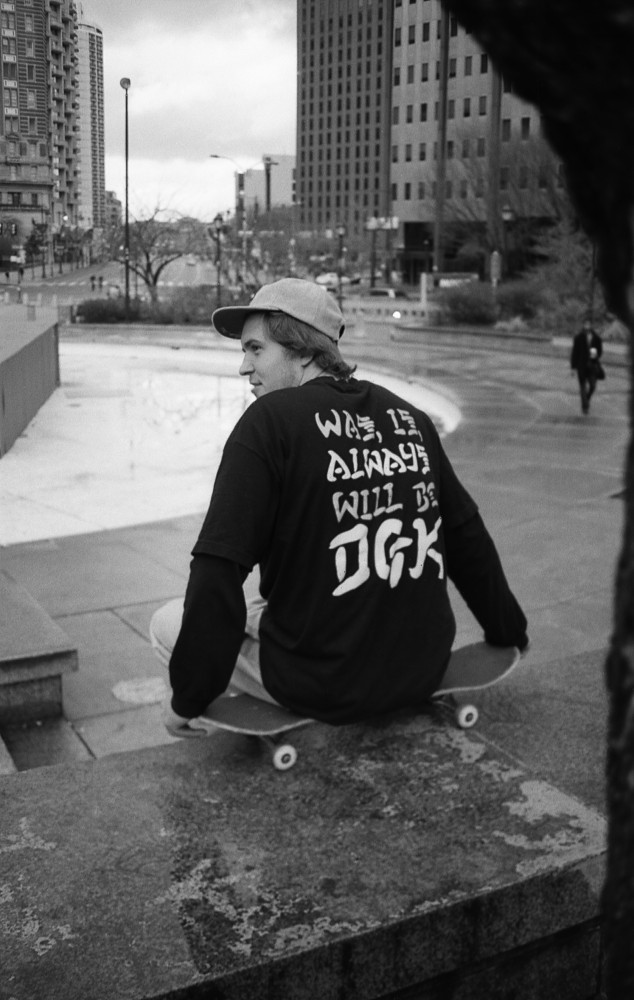 “LOVE’s design, with its vantage points above street level, high walls, and nooks, allowed for shady activity right in the centre of downtown Philadelphia. It was extremely lawless, until the cops showed up from time to time.”

Cristian: London had a similar story with the Southbank undercroft skate space that was ultimately saved from properly developers after an eighteen month legal battle, why do you think LOVE wasn’t able to be saved?
Jonathan: Philadelphia has always had a grudge against skating. It started with Mayor John Street and then the next mayor, Michael Nutter. It also has to do with the size of the skateboard community here, since it’s not as significant as the London scene. With London being such a large, international city, I feel like skaters are more likely to hold higher positions within the community, such as lawyers, activists, government workers (or at least have connections to people who hold these types of positions), which would enable them to put up more of a fight. The only organised skate ‘activists’ we have here are more concerned with building small concrete parks, and do not want to go against the city’s decisions, in fear it could jeopardise their future relationship with them.

Cristian: What are your favourite images in the book?
Jonathan: Although I do not consider myself a skate photographer, there are several images in the book of skate tricks. My favourite images in the book are a combination of two skate trick images. The first, at the beginning of the book, is of Ricky Geiger doing a nose wallie out the 7-stair. It’s a type of panoramic view of the park and all the life that inhibited the place. The second, at the end of the book, is of Brian Panebianco doing a switch varial heelflip down the same stairs as the first. At almost the same viewpoint. This time though, the background is only of the deconstructed park. These images show how the park changed from the beginning of the book until the end. Although the park was dead, the impulse of the locals to not let go of this beloved place, shows how important LOVE was to our culture and lives.

Jonathan Rentschler’s LOVE is out now via Paradigm Publishing.