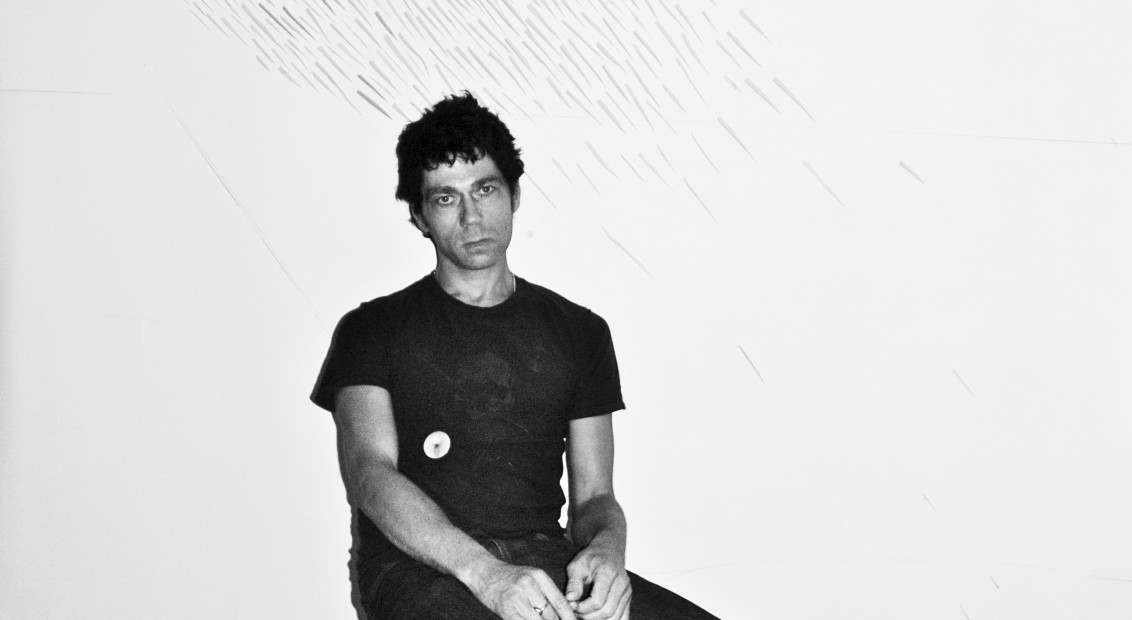 Sex, death and fetus art: A chat with Tim Noble

Creative collisions often have epic results. Just take writer Luisa Le Voguer Couyet and photographer Scarlett Carlos Clarke, friends and fearless social commentators who put their own heads together last year to found their own zine, titled Hate. In its two issues since, the duo has featured an electric and diverse range of contributors, from Pam Hogg to Paul Fryer and Martin Parr, who shot the cover of their second issue. In giving young artists and writers somewhere to work together and be heard, Hate has become a generational voice straight out of London.

Today we kick off HERO x Hate. Our own collaboration, it takes form as a series of profiles on artists, musicians, filmmakers – anyone we find mutually riveting, interviewed and photographed by Luisa and Scarlett exclusively for HERO online. Here we will step inside the worlds of a select few transfixing creatives, one by one.

And who better to kick it off than one of art’s most notable joint-workers, an “enfant terrible of contemporary art” – as he and his creative collaborator Sue Webster are fondly referred to as – Tim Noble. 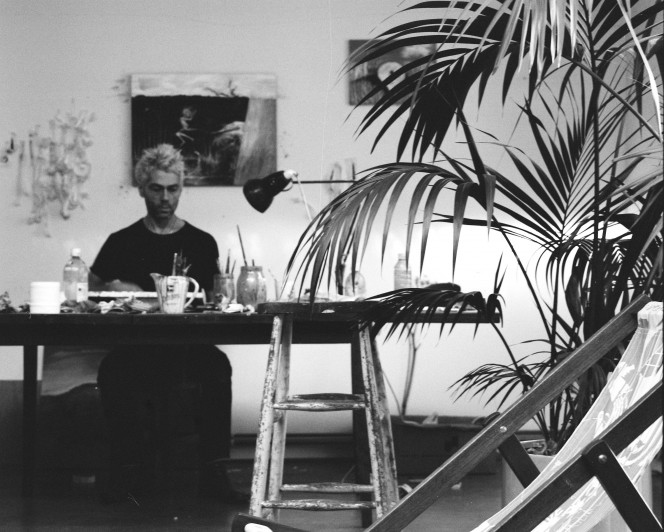 A childhood full of nature and the freedoms of creative expression had a profound effect on Tim Noble. Inspired by his father, also an artist, Noble began by studying art, later going on to meet his collaborative partner, Sue Webster. Together Noble and Webster experimented with rubbish and lighting, using their hands to make sculptures, the first of which, ‘Miss Understood and Mr Meanor’, was created in 1997. Surrounding environment continues to be a significant influence on Noble, who has just moved to Kingsdown, and is currently working on a series of landscapes involving foetuses.

Luisa Le Voguer Couyet: How did you get into art?
Tim Noble: I grew up in a remote village in the Cotswolds, my Father was an artist he had a studio in the garden where he was modelling his latest piece in clay, a pair of naked conjoined figures called ‘THE MARRIAGE’, the details were astonishing – he would spend months on these things modelling, making molds, casting them and painting them himself. He never showed them, maybe because they were quite sexually explicit and very personal to him. He didn’t believe in selling his art. He thought money and art were two separate things.

“School was frustrating, I find it hard to be taught until I do it my way.”

So I was exposed to sex and death through art at an early age. A massive amount of my time as a kid was spent in the overgrown garden of the house where I lived which extended to the woods below ­playing, inventing things, lots of improvising and building things, smashing things up ­so everything was a landscape of potential creativity and destruction. I was allowed a lot of freedom to indulge and run havoc, huge amounts of pleasure were conducted from this. School was frustrating, I find it hard to be taught until I do it my way.

LLVC: What differences are there between working as part of a duo and making art alone?
TN: I have worked intensively with Sue Webster, my collaborator, for 25 years, we have a belief system that pushes things forward, a great sense of self belief and determination. There were times in the studio when I would bury myself into obsessional ideas separate from Sue’s thoughts, I would work for weeks on them without any pressure for it to be anything, just me immersed in a really intense world making things with my hands straight from the imagination, but ultimately it existed under the roof of Noble and Webster and would either be included or left to rot.

Working separately has taken time but I had to develop my own self­-support system, on a day-­to-­day basis it has been fuelled by failure, and a great sense of weight and demoralisation. With perseverance I have developed an overriding system of belief that has allowed me to move forward with great determination and punch through the other side, exciting things are starting to emerge.

LLVC: Do you think studying art will do, or has already become inaccessible to a lot of young people today?
TN: A few weeks ago I was asked to revisit Nottingham Trent University’s art dept. I stood in the sculpture dept. on the spot where the spiral staircase used to be, at the time it was the only space left in the sculpture dept. so I grabbed it and thought it was quite special even though it was actually completely shit. The point is you make the best out of what you have. If you have some sort of burning ambition you are going to transcend, you are going to outgrow your circumstances. For young people today studying art gives you time to experiment and time to decide whether you want to pursue it. I did a foundation course, I was told there was no point in pursuing art if I wanted to earn a living. I mean, it took a while in the real world, it took a lot of hard work, years of hard work, I wouldn’t say it was luck ­ it was sheer determination and original ideas ­ you have to find a way to survive and money can cripple creativity. But on the other hand lack of money makes you improvise, risk pushes you forward and there is no risk unless you make mistakes and stick your neck out and get up people’s noses a bit.

“There were times in the studio when I would bury myself into obsessional ideas separate from Sue’s thoughts … but ultimately it existed under the roof of Noble and Webster and would either be included or left to rot.”

LLVC: What kind of people were Miss Understood and Mr Meaner?
TN: They were cheeky young cunts with no gallery or representation, John Major had been replaced by Tony Blair so I had stopped signing on, it had taken a lot of hard work to get to this position, I was bang in the middle of Shoreditch living in a disused warehouse that I was about to do a show in with three new collaborative pieces I had made with Sue, everything changed from that point. 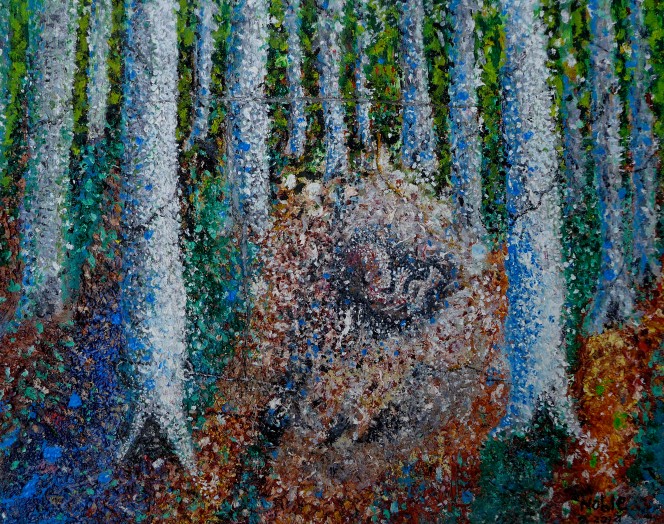 LLVC: What is your favourite medium to work in?
TN: I work with my hands so it was rubbish. I loved rubbish and collecting rubbish in the rain and how plentiful and spontaneous it was to build things with, but also highly overused as an artists medium so it had to be used differently. The first shadow work I built was me making something out of boredom. I needed it to be fast with no money pressure, it seemed naff at the time, I wanted to build something which looked shit like art school Skippy dipping class. I was embarrassed by it at first until friends kept saying you have to show this. I like to work on a number of things at once which can be problematic as I am addicted to the new without finishing things, I get into this hyper state with eight different things on the go. At the moment I am modelling with clay and a magnifying glass and beginning a series of new paintings to lighten up the intensity of the modelling work.

LLVC: Music has been a great influence, what musicians in particular?
TN: I enjoyed making videos for Fat White Family especially The Drones video, three of us, Scarlett Carlos Clarke and Rob Hawkins and I made it, five days before Christmas with no budget, no band ­ they were on tour. It had to be released on Christmas eve, it took thirteen hours to film in their local pub The Queen’s Head during a very debauched party being held there. I wore a pig’s head strapped to my face. The whole thing was exhausting, it nearly killed me, the pig’s head was going rotten and I strapped the fucking thing to my face with a belt, face right in it. I had carved its brain out enough to get my face in there, a poor little piggy from the abattoir. I mean you have got to ask why? Why do it?

LLVC: Your new solo work features and focuses on fetuses, can you explain the significance or relevance of this?
TN: Fetus landscapes, they are a series I painted on board with oil paint of the Slad valley near Stroud where I was born and have a house there, I grew up there it’s a way of capturing the place and making it mine, but I couldn’t just do landscapes so the fetuses started appearing in them.

I held a human fetus in my hand once it looked like it was going to open its eyes and start talking, it had quite a profound effect on me. Later I imagined what if all the unborn fetuses in the world were wondering around the landscape, or they lived in the sewer or hung around in the grass, the cat bringing them in. So the paintings began. 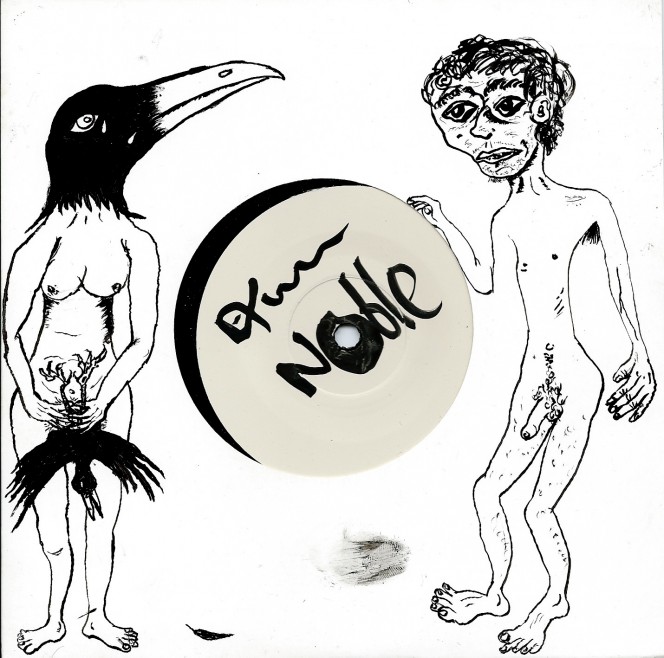 LLVC: What piece of work are you most proud of, and why?
TN: The personal work I am working on now. And of course past collaborative work, I am very proud of the first solo show the opening show at Modern Art on Redchurch street titled ‘WOW’.

LLVC: What do you hate?
TN: I hate ignorance. I hate excuses, I try and work out why I hate something, understand the cause and be less threatened by it. I hate deer tics but they are just doing what they love to do which is suck your blood and reproduce.

I recently moved out of London to Kingsdown in Deal so if I wake up with anxiety or a belly full of hate then a swim in the English channel cures everything.