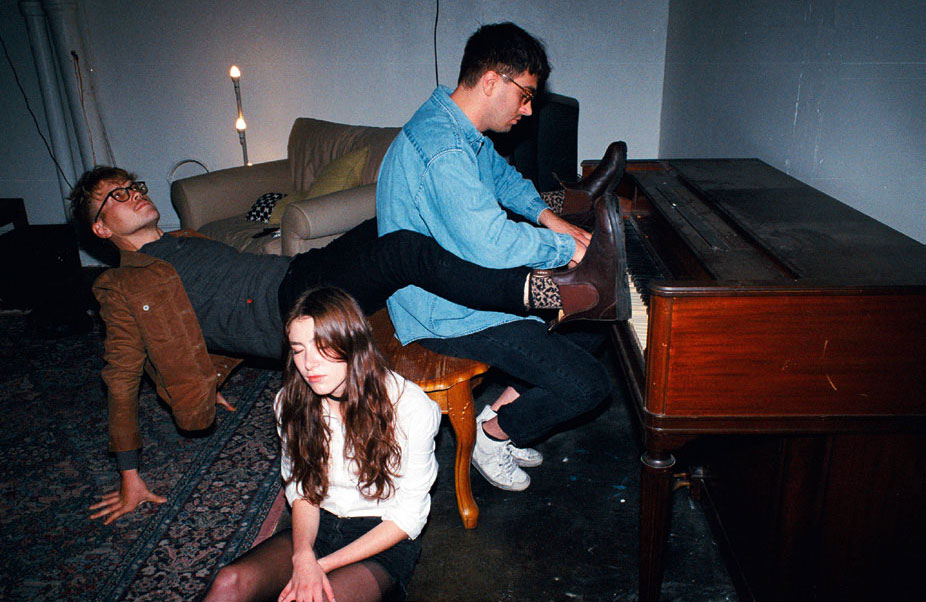 HERO 14 focuses its gaze upon Detroit, a city on the precipice of a defining age. From ground level a ballsy, collaborative music scene thrives, channelling the passion and determination that reverberates throughout the city. Plug into Detroit’s beat and press play on the playlists inspiring the bands at the vanguard of this fresh scene, featured in the new issue.

With a full throttle debut album, 17 Songs About the Same Girl, and EP, I Always Know, in the bag, Detroit band Growwing Pains are striding forward with bold panache. Like all good bands, they are formed around a tight friendship and electric energy that translates raucously both on wax and stage, nailing that balance between being carefully constructed yet on the verge of falling apart – leaving the edges nicely roughed.

“When we were kids Adam and I started going to shows like really early on, when we were in high school. I remember seeing a local band called Terrible Twos a lot, and that kind of made me want to start making music like that, it looked so fun,” says frontman Zak Bratto of growing up in Detroit.

Seeing Detroit’s vibrant music scene energised the band, prompting them to pick up their instruments and give it a go themselves. “As far as starting up I think an important thing was that there was music happening in Detroit on a local level when we were coming up,” explains drummer Jake Kmiecik. “There were bands just a little bit older than us who were playing and making records in the city right before our eyes, they really made it seem possible for us.”

The band here kicks off our new issue playlist. Press play and dive in.

Whole wide world by Wreckless Eric
“Probably my favorite song of all time. It’s just tight. Super simple like every song should be, sick hooks, and it still sounds just as good as the first time I heard it. Also those lyrics. Hope this guy found his dream girl.”

Bums on a rock by The Rebel
“Love this record. Ben Wallers from Country Teasers. One of the best poets of our time and a truly original musician.”

The Author In Her Ear by Strapping Fieldhands
“My friend just turned me on to this band a couple months ago. I really like them. Kinda reminds me of The Beets fused with Violent Femmes. Anyway it’s been awhile since I’ve heard a truly quirky band. I really like how weird and nonsensical the lyrics are.”

Shoulda Been Fishin’ by Craig Brown
“This is our buddy Craig. “I’m John Cusack on the wrong side of the road” Friggin’ ingenious. Wish I woulda wrote that shit. This is one of the only instances where someone has successfully peppered little bits of humour to a song without making the whole thing into a joke. Easily the best thing to come out of Detroit this year.”

Stranger by Twerps
“Excellent band from Melbourne with the best influences. One of my faves.”

Miserable Life by Action Swingers, selected by Adam Hunter
“I wanted to put Losing My Cool but it’s not on Youtube,” says Adam. “I think that’s one of the best punk songs ever written. I love all their songs though, super gnarly.”

English Rose by The Jam
“A truly timeless love song. You just have to hear it and feel it.”

Outsider by The Ramones
“Just sums it all up. This my theme song haha. Theres like three chords in the song and 6 lines of lyrics and its still the greatest song ever.”

Place Unknown by Quintron
“This song just brings the party wherever it’s played. It’s completely weird and out there, and yet has that rock n roll feeling of the 1950s, mixed with that drum machine techno thing that’s going on, and the organ that’s all over the place but still super driving and rhythmic. My favorite stuff is stuff that’s really unconventional but you can still jam out to. Quintron has an amazing live show, too.”

Heat of Violence by 39 Clocks, selected by Jeff Urcheck
“It’s basically sounds like someone playing an angsty German Velvet Underground through a crackling tube receiver. What’s not to love about that?”

Aos Baroes by Lo Borges
“This guy has one good album (it’s this one), but this track is the gem of it. It was great listening to this driving through Oregon, and it still reminds me of the beautiful scenery. “Everybody Knows This Is Nowhere era Neil Young getting into Brazilian weed jazz and also in Portuguese” the album.”

Before The World Was Big by Girlpool
“I’ve always been a fan, but this album was great. Childhood nostalgia running through the lyrics, gorgeous guitar tone, great use of rhythm and time signature changes, simple and complex at the same time.”

Talkin’ to a Wall by Growwing Pains

‘I Always Know’ by Growwing Pains is out now via Volar Records.