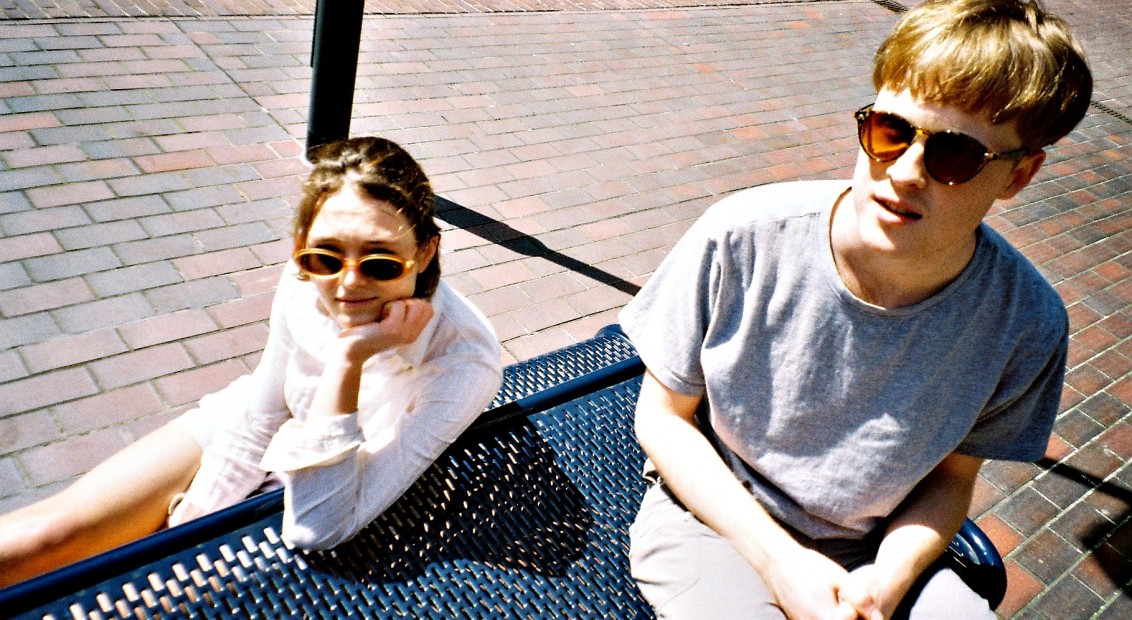 Having met while studying at Guildhall School, London-based duo Jockstrap took full advantage of the School’s wide range of equipment, resources and fellow students – recruiting many for their debut EP Love Is the Key to the City. Broken down as Georgia Ellery and Taylor Skye, the pair may approach music from different standpoints – jazz and electronic composition respectively – yet under their united pseudonym they combine to create something utterly lush and unique.

Drawn together by a shared classical music background and a willingness to embrace cross genres, the duo combine their individual talents with lo-fi drama. Take Wet, for example, the opening track on their new EP. Beginning with the sound of a running shower set against a soft piano and Ellery’s ethereal voice, the scene quickly erupts with the addition of a string quartet. It feels intimate, voyeuristic and somewhat ASMR-inducing (look it up if you don’t know). Within this broad soundscape your mind is allowed to wander and create its own visuals.

This penchant for creating swirling, sensory worlds underpins the entire EP – each track an individual scene in the duo’s rich narrative – and is something Ellery explains stems from her classical background: “I mean growing up we were always told to explore. We would have to get through long metaphors from the conductor about how to make things sound – like colours or sensory things; instead of things being described as “softer noises” maybe something more abstract would help us.”

Extending this layered ethos to their live performance, next month will see Jockstrap perform tracks from their EP at St Pancras Old Church accompanied by a live string quartet. And that’s after they’ve finished shows supporting Let’s Eat Grandma and Goat Girl. 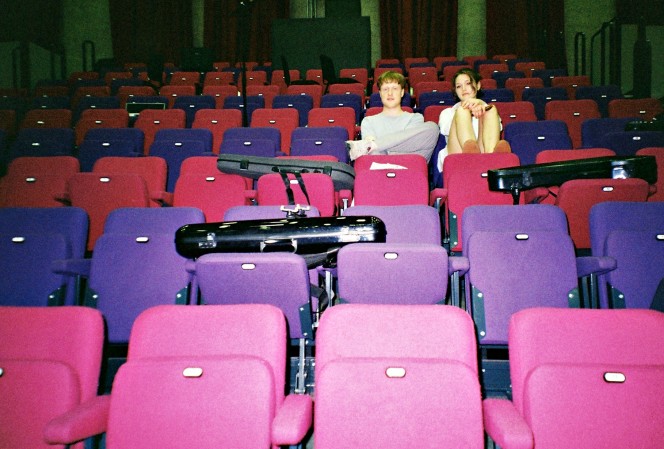 Daisy Scott: You two met on your courses at the Guildhall school, what are you both studying?
Georgia Ellery: I study a jazz course and Taylor studies an electronic music course.

Daisy Scott: And how did that move into making music together?
GE: Well, I had been writing a couple of songs over the summer of 2016, no 2017 maybe, and I had heard Taylor’s music online, he was producing at the time – small little tracks and then putting them on YouTube. I really liked it and I thought that it could work well in a songwriting setting. I thought that it would be interesting to hear what it would sound like so I approached him and said, “Look I’ve got this song, what do you think about sitting down and getting through some”, and he was up for it.

Daisy Scott: Was it strange because you both come from different musical backgrounds?
GE: I think actually we both come from a similar musical background, even though it is different in some aspects. I grew up playing classical violin and I think Taylor played classical piano. We were both brought up in very music-orientated environments, with parents who were supportive and took us to lessons. Our musical values are pretty in sync actually.

Daisy Scott: At what age did you start playing violin?
GE: I got a violin for my fifth birthday, I remember my mum being like, “Surprise!” and I was like, “Oh no,” but it worked out in the end. Both Taylor’s parents were in the West End, so he had a very theatrical background and upbringing, he was exposed to it from a young age.

Daisy Scott: Were you exposed to Jazz music from a young age?
GE: Not really. I mean I chose to do a jazz degree because I knew I couldn’t hack a classical music one. Classical music degrees are so regimented and you don’t really get that much freedom to do your own thing. It takes a lot of commitment and I knew that I wasn’t up to that, so the other course that was at that standard – because I knew that I wanted to go to Guildhall and to London – was jazz, so I kind of just winged it.

Daisy Scott: So where are you originally from?
GE: I’m from Cornwall.

Daisy Scott: Would you say that moving to London has been an influence on your music?
GE: Yeah I think so, I mean I wouldn’t be making the music now if I hadn’t have moved to London. I think it has been a big part of it – hence the name of the album – you know; I didn’t grow up in a city so it is slightly different and has definitely had an impact.

Daisy Scott: I wanted to chat to you about your track, Hayley. It’s inspired by one of the women in Louis Theroux’s documentary on sex workers in the US. I looked her up and and there’s a Facebook group full of people asking about her.
GE: Really?

Daisy Scott: Yeah, apparently she is now married.
GE: Actually I remember Googling her when I was going through my phase of fascination with her. I really admired her, I thought that she was really charismatic and someone who I’d really like to meet. But yeah I remember looking her up and not being able to find out that much, I searched the brothel and I think it is still active.

Daisy Scott: Why did you want to use her as an inspiration for the single?
GE: Like I said, she is very charismatic and I became very fascinated with her. I’ve never seen a documentary like it, where the subject has got so involved and flipped everything on its head. I like musing about other people within a song, I feel like my songs are about one person, and she had a lot that I could talk about. I remember going through the documentary and getting a pen and paper and writing down all her sayings.

Daisy Scott: You say that you take a lot of inspiration from people, who is your current inspiration?
GE: Well in songwriting I have switched from women to men [laughs] because it has previously been very female-orientated, especially for the album. But I have got a couple of people, another personality that I became very fascinated with is Robert Mapplethorpe. He’s an interesting one, he has got a song in the works.

Daisy Scott: Do you think you also take inspiration from events, your music is very cinematic?
GE: Yeah that as well, definitely. Particular events in my life, and others. I can sometimes look at it from a different point of view. I don’t think I would be able to write about an epic – maybe just short snippets.

Daisy Scott: With your latest track Joy, the video is super vibrant and sensory.
GE: Well it’s a video that I was really particular about, and really happy with the result. I think that the song Joy is very sensory and it has this… even when Taylor and I were writing it and I thought it would be really cool for me to write the first half with strings, the whole time it had such a strong colour – a pink, hazy beige, golden colour.

Daisy Scott: I love the syrup and honey coming out the mouth.
GE: Yeah. Being able to shoot it and get all the colours that I wanted was great. It’s actually made up of a load of clips and when I was putting it together I realised how things may not be long enough, and some were disjointed. But I think I got the colour right and I got all the sensory things that I wanted to do. It is heavily inspired, the lyrics and the video, by Christina Rosetti and there are loads of tropes in there that I have included. I won’t spoil it. Making videos is really fun.

Daisy Scott: So do you think about colours when you are writing music?
GE: Erm, sometimes. I mean what’s the word?

Daisy Scott: Synesthesia?
GE: Yeah, I mean, I don’t have that [laughs]. But growing up we were always told to explore, we would have to get through long metaphors from the conductor about how to make things sound – like colours or sensory things; instead of things being described as “softer noises” maybe something more abstract would help us.

Daisy Scott: And you’re performing with a string quartet at your show at St Pancras Old Church.
GE: Yeah Joy isn’t going to be performed but we have other things planned, there is some material that is going to be played from the EP. Yeah, it’s going to be good, I’m a bit nervous that it is going to be like a variety show [laughs].

Daisy Scott: What can we look forward to next?
GE: We have had some great offers and opportunities to collaborate with people.

Daisy Scott: Can you say who?
GE: No, but we aren’t going to release a big album. We want to be as creative as possible, we haven’t released any music yet but our drummer in the band is a really great rapper, so he’s been doing some spoken word in the shows and we want to explore that some more. But Taylor remixes all our songs, so there will be a remix version of our EP.

Jockstrap’s debut EP Love Is the Key to the City is out now.