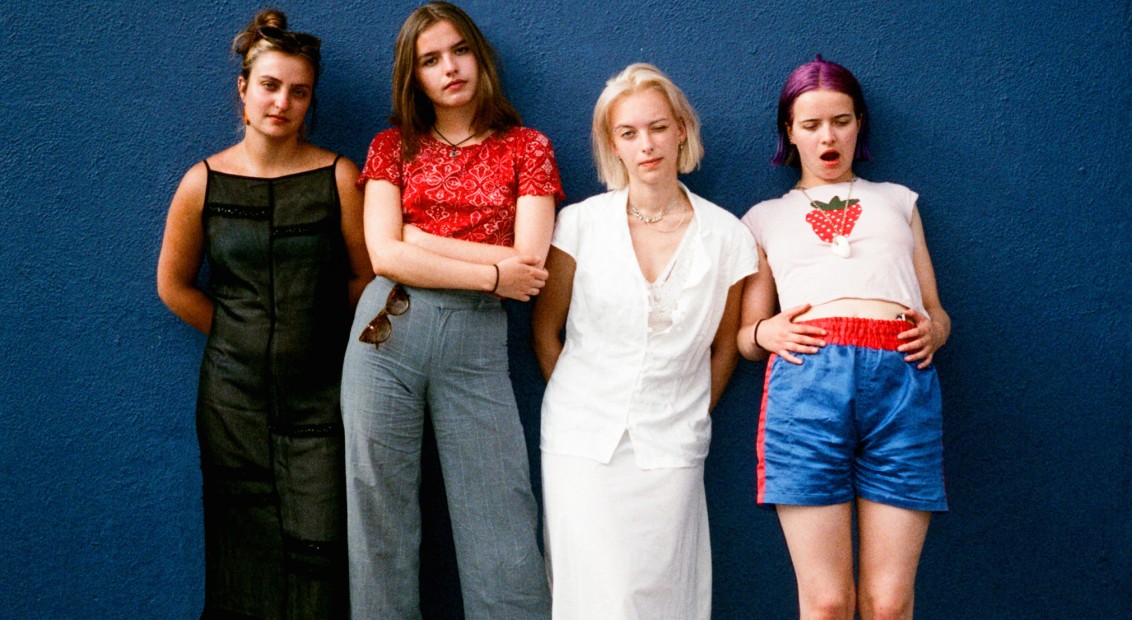 Goat Girl – the South London quartet causing all the noise

“Everything is political in its own way,” states Rosy Bones, drummer of South London four-piece, Goat Girl. In today’s musical sphere, there’s a strange dichotomy occurring where many artists are choosing not to address key socio-political discourse. However, Goat Girl are becoming rapidly known for their ‘voice’, and although not aspiring to be a ‘political’ band, they aren’t afraid to speak their mind.

It’s this attuned way of seeing the world and their own artistic awareness that makes their music so rich, authentic and relevant – a real snapshot in time irrespective of the subject they’re addressing. Signed to Rough Trade after only a few years together, friends Clottie Cream, Naima Jelly, L.E.D. and Rosy, have supported everyone from The Fall to Parquet Courts to The Lemon Twigs.

Noisy, demanding to be heard, yet completely effortless and unassuming, the band’s diversity is shown in everything from their attention to lyrics – quick-witted quips about life in young London and its observations – to opening chords that worm deep inside your head, and exploring new arrangements on each track.

Having just released a limited edition 7” with tracks Crow Cries and Mighty Despair before heading out on their first headline tour this November, we chewed the fat with Goat Girl.

Clementine Zawadzki: Goat Girl seems to have evolved quite quickly. Is this music something you’d always intended to pursue?
Rosy Bones: We’ve all kind of always done it separately, and then we all found each other. For me, personally, music is always something I’ve been interested in and felt I could do, really. The others as well, we’ve all just very much been into it for a long time.

Clementine: Did you know early on you’d each found the right people to make it work?
Rosy: We didn’t really think about it in that way, the thing that maybe helped was when we were playing together just for the pure enjoyment of it, and then we got our manager who really helped us out and got people to come and see us, and then it just kind of happened for us. Some people have a game plan, but we just never had that at all. I think that maybe made it a bit better because it was only about us four playing music together.

Clementine: Is it harder now that there’s more structure…
Rosy: It is hard, yeah. It’s weird getting signed, it’s amazing but you have to remember why you started because it’s like your job. It’s weird getting paid for something that you feel shouldn’t have a price on it. 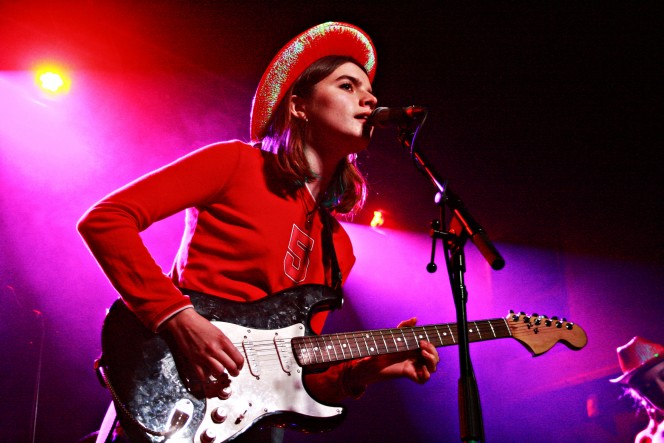 Clementine: Do you feel you have to find other things to do now that music’s your job?
Rosy: Yeah well my friend and I have just started a new band as well. We all write our own solo stuff too. It’s weird because before, music was something you did as a pastime, like we all worked and stuff and then we had to quit our jobs because it was very demanding and now I’m just trying to do other stuff as well. Music’s the thing I love, but sometimes it gets a bit tiring after a while, so I’ve joined chess club now and I’m doing other activities just to keep my brain active because I’ve gone a bit brain dead I think after everything that’s happened.

Clementine: What is it about Bill Hick’s Goat Boy that inspired your band name?
Rosy: The Goat Boy sketch is actually really disgusting, isn’t it? We don’t actually really like that. I kind of watched that and was like “Err, that’s grim!” I guess it’s just an ode to him more than Goat Boy, just because we like him.

Clementine: Does the fact you’re a band of girls get touched on a lot?
Rosy: I think some bands market the fact that they’re girls – which is fine – but it’s not what we personally like to do. We’ve kind of been taken seriously in that sense, except for the occasional ‘girl four-piece’ or thing like that. We’ve actually had it really good where people just see us as a band, which is really nice. One time we were in France and doing loads of interviews, and they just kept talking about women in music and this guy was talking about putting out a record label just for female musicians and we were like, “Nah, that’s shit,” like just put out good music, don’t credit someone just because they’re a girl because that’s patronising as well. We don’t want people to be like, “They’re good, for girls.”

Clementine: What’s your process like?
Rosy: Lottie will bring the base of a song, and then we’ll all work around it and put our ideas in. We kind of have phases… like one day we’ll write loads and loads, and then the next day we’ll have nothing. It’s an unpredictable process. We have loads of songs, like unfinished songs that we’ve been stuck on for ages, and then one day we’ve just sorted every song out. It just depends what mindset and mood you’re in on that day.

“They sent it off to a musicologist, and they were like, “No, you can’t release that,” because The Rolling Stones are kind of infamous for suing people.” 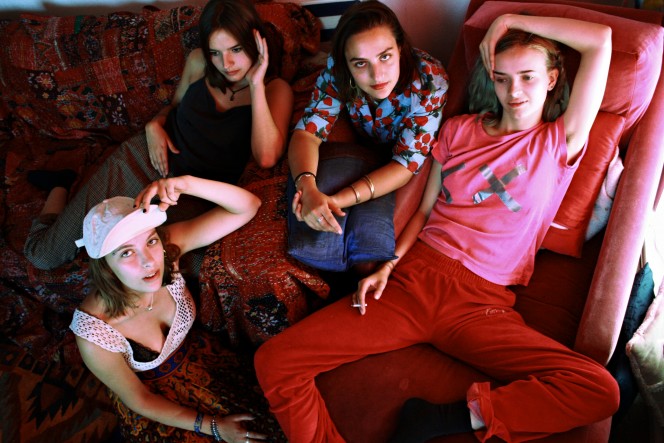 Clementine: You’ve got a new 7” with the songs Crow Cries and Mighty Despair. What are those tracks about?
Rosy: Crow Cries is quite old, actually. I joined the band like two years ago or something, and we had that song then. Lottie wrote the lyrics, she says it’s like a crow viewing London, flying around and seeing what’s happening – positives and negatives. We’ve been in the studio a lot recently, experimenting with different sounds, like drum machines and more electronic synthesised sounds, so Mighty Despair is like an introduction to that I guess. There’s a funny story about that actually, because it used to have a different outro. We recorded it and were really happy with it, and then our manager was like, “It really sounds like Satisfaction by The Rolling Stones.” It had a completely different feel to it, like you wouldn’t think it. They sent it off to a musicologist, and they were like, “No, you can’t release that,” because The Rolling Stones are kind of infamous for suing people.

Clementine: You don’t want them after you…
Rosy: No, so we had to change the whole outro. I prefer the old ending if I’m honest, but this is alright.

Clementine: A musicologist though. What a job title!
Rosy: I know! It’s weird though, because what must be the formula for knowing if it’s too similar.

Clementine: You talk about London as well. What is it about your surrounds – the positive and negative – you mentioned?
Rosy: I guess it’s a love/hate relationship, because it’s a really great place to live and there are lots of things going on. We have The Windmill, and I always know that if I go down there I’ll see people that I know, because there’s the old guys that drink there every day. Just a real sense of community, but that’s dying out as well, a lot of great places are really struggling and getting closed down… just gentrification, really. It’s so expensive to live in London. We’re trying to find somewhere to live at the moment, it’s just ridiculous.

Clementine: I imagine it’d be difficult because you’ve been touring too…
Rosy: We had two tours that kind of joined together; it started with The Lemon Twigs, which was so good, they’re such lovely boys. I think we just really get on with Americans, because we just played with Parquet Courts and we really enjoyed that, then it went onto Girl Band, so it didn’t really stop. It was great, I love them both. It was really funny because I don’t think you can get two more different bands. The most recent one with The Moonlandingz was great as well.

Clementine: You’ve supported some amazing bands. What have you learnt along the way?
Rosy: We were kind of touring a lot on and off and through that time we just got so much better. Like as a band playing together from the first show to the last, we’re just so much more confident, and we’ve met loads of people because on these tours because we go to the same places quite a lot. It’s great to see headline bands and what they do, because it’s kind of prepared us for what we’re going to have to do. It’s kind of a lot easier being the support; you get to turn up later, play earlier and just relax after. The headline band has to turn up so early and do sound check and then has all this time to kill, so it can get quite draining because you’re in a bit of limbo. It’s great – you have the whole city – but you really just see the venue, the hotel, and maybe a bar after.

Clementine: It sounds so glamorous [laughs].
Rosy: I really like touring! Some of us don’t like it as much, but I really like it. Bands tour for months and months, and the longest we’ve done is ten days and even that was like, “Oh my god, so glad to be home now,” and it’s going to get so much worse [laughs].