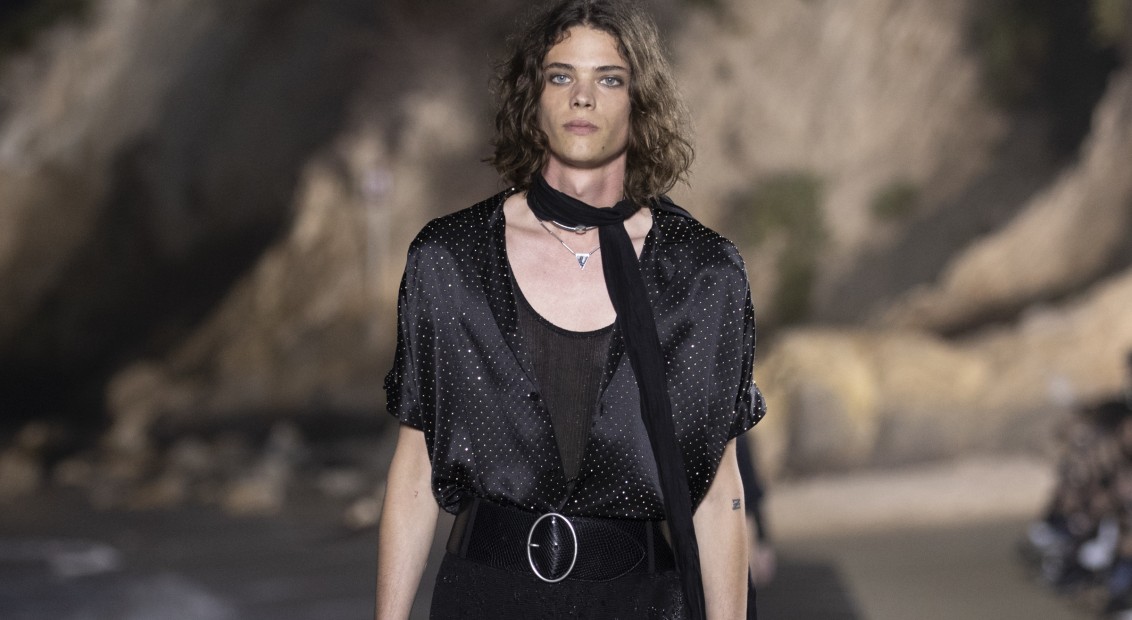 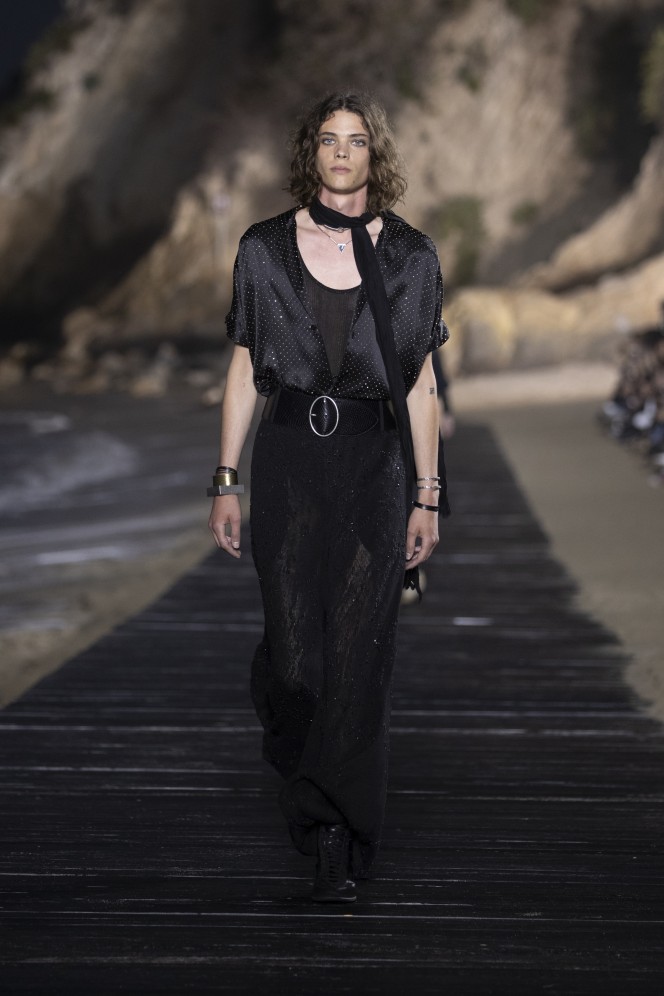 Malibu’s Paradise Cove: the cover for the Beach Boys’ Surfin’ Safari was shot there, The Rockford Files was filmed there, Cali surf band The Lively Ones riffed on it and yesterday evening, the sequestered beach became the dramatic setting for Anthony Vaccarello’s SS20 menswear Saint Laurent show. Having borrowed the bright lights of Lower Manhattan as a backdrop for SS19, this time we’re in California with the tide breaking at our ankles.

“LA is the new Marrakech,” Vaccarello said post-show, referring to Yves Saint Laurent’s deep affiliation with the Morrocan hub; a location famed for luring bohemian dreamers such as Brian Jones, Paul and Talitha Getty, William Burroughs, Frank Zappa and Janis Joplin. Becoming a second-home for Yves and his partner Pierre Bergé, Marrakech was an enduring influence on the designer’s work; from his safari jackets to those iconic images of Catherine Deneuve in vintage YSL shot by André Rau around the city, from the souk to the desert dunes.

For Vaccarello, 2019 LA embodies that same melange of bohemian fantasy. In particular, Malibu’s Paradise Cove, where he set his SS20 show. On a black wooden promenade-cum-catwalk, parallel with the evening tide, guests were offered branded flip-flops as the sun melted into the Pacific Ocean and clouds gave way to the night sky.

Technically an oceanfront trailer park, Paradise Cove has become a hotspot for those in search of idyllic California bohemia, attracting many artists, screenwriters, musicians and surfers. The comparison between Vaccarello’s Malibu and Saint Laurent’s Marrakech already takes shape, and that’s before we’ve even mentioned the towering palm trees, cobalt sky and wide beaches.

Yet the mood for the collection stemmed from another YSL imprint, Mick Jagger. In particular, the Stones’ legendary, uber-theatrical 1975 Tour of the Americas, their first outing with Ronnie Wood following the departure of Mick Taylor. Inspired by a meeting with Jagger before the band’s most recent tour, Vaccarello dived into the band’s rich sartorial archives, plucked details and colours from the band’s ‘75 wardrobe before filtering them through his own design lens.

That touchstone was clear from the opening look: all-black, sparkly louche silk shirt unbuttoned to the waist with matching sheer Aladdin pants, low-hanging skinny scarf, hollow cheeks, eyeliner and shoulder length hair – it was oh so Jagger. From there, that beachside rockstar aesthetic evolved into kimono-style shirts, second-skin jeans, slim sequined blazers and one embroidered piece that hung across the shoulder in Tarzan-style, wrapped across the stomach and left to hang in the breeze – a nod to Jagger’s chest-exposing jumpsuits? Certainly. Wide-brimmed hats reminded us of the darker recesses of 60s bohemia while embroidered pieces silver’d in the moonlight, accessories swung like insignia from midnight adventures, and military details evoked a slightly pirate-y feel – Paradise Cove was known as Smugglers Cove in the late 1800s, no less. It all said seduction, it said Opium, it said pure Shangri-LA.

A safari jacket spoke of Yves’ Marrakech, while tour jackets screamed the Stones and crisp white tailoring nodded to Bianca Jagger’s iconic YSL wedding outfit, worn when she tied the knot with Mick in Saint-Tropez in 1971.