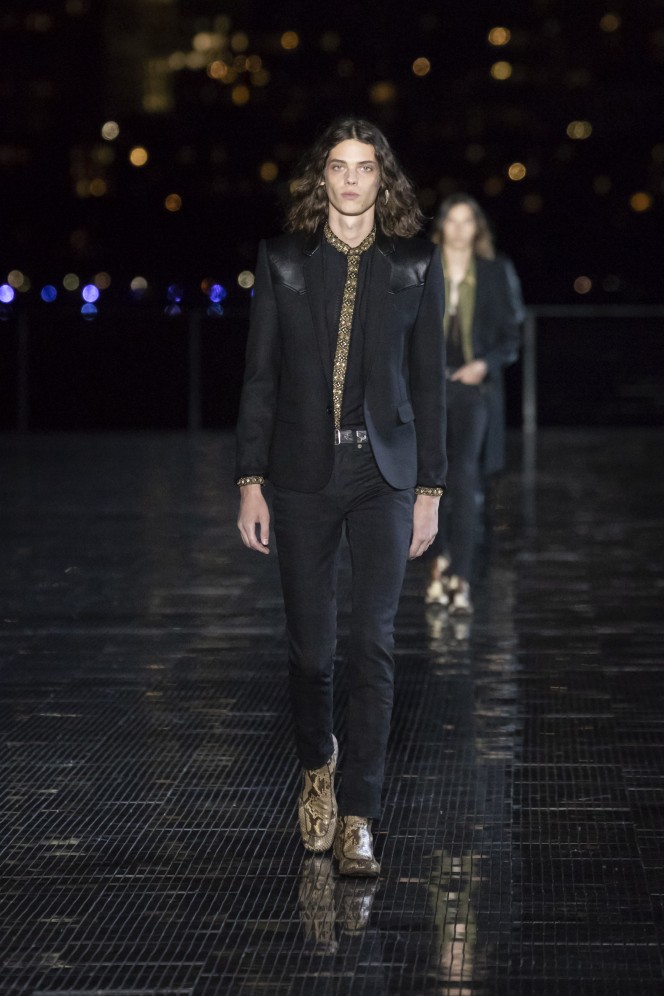 Since his appointment as creative director at Saint Laurent, Anthony Vaccarello has proved he can go big, from the epic set constructions, the A-list faces (the likes of Vincent Gallo, Kate Moss, Betty Catroux and, most recently Lennon Gallagher) to the designer’s dark and sexy spin on the Saint Laurent design code wheel.

So when Vaccarello announced his debut menswear show for the French label earlier this year, it was never going to be a subtle affair. Having previously shown select men’s pieces within his womenswear shows, last night marked the first menswear-focused show, in New York City. Well, New Jersey to be precise, at Liberty State Park, with a view of Lower Manhattan as a backdrop.

Boarding the river ferry across the Hudson, guests found themselves sat riverside inside a vast scaffolded structure (in similar fashion to SS18’s Jardins du Trocadéro construction), complete with a black marble catwalk that stretched parallel with the rippling water. As the sun faded, across the water the great towers of Manhattan took their cue and lit the night sky – their rectangular profiles outlined by grids of dazzling bulbs.

An iconic vista and the same (albeit from a different angle) that backdropped Yves Saint Laurent’s infamous Opium fragrance release party 30 years ago in 1978. Aboard a ship on the East Harbor, guests (including Cher, Truman Capote, Diana Vreeland, one giant bronze Buddha and over 2,000 white cattleya orchids flown in from Hawaii) enjoyed a debaucherous night costing a rumoured $300,000. The after party? Studio 54, of course.

Back to the present, and Vaccarello’s boys were primed for such a hedonistic time. The black and gold theme instilled by the NYC backdrop extended to the first look: A black tuxedo with leather shoulder panels paired with a gold trim collarless shirt and python boots like those worn in the West. I’m talking Wayne, I’m talking Eastwood. The established Saint Laurent starting line-up soon followed. Streamlined smoking jackets, high-waisted trousers, tan suede jackets, embroidered bombers, silky shirts, safari tunics and crushed velvet blazers – many paired with bandanas fit for the urban cowboy.

The finale saw the boys walk the runway bare-chested; painted in silver glitter with sparkly leather trousers to match and necklaces tangled across their torsos (à la Robert Mapplethorpe), after all, there’s nothing more glam than wearing the party home. 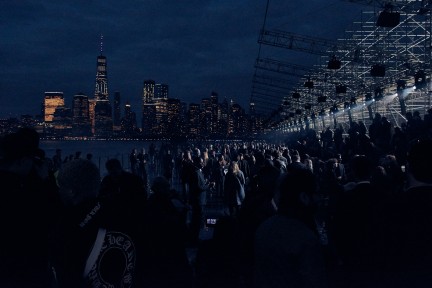