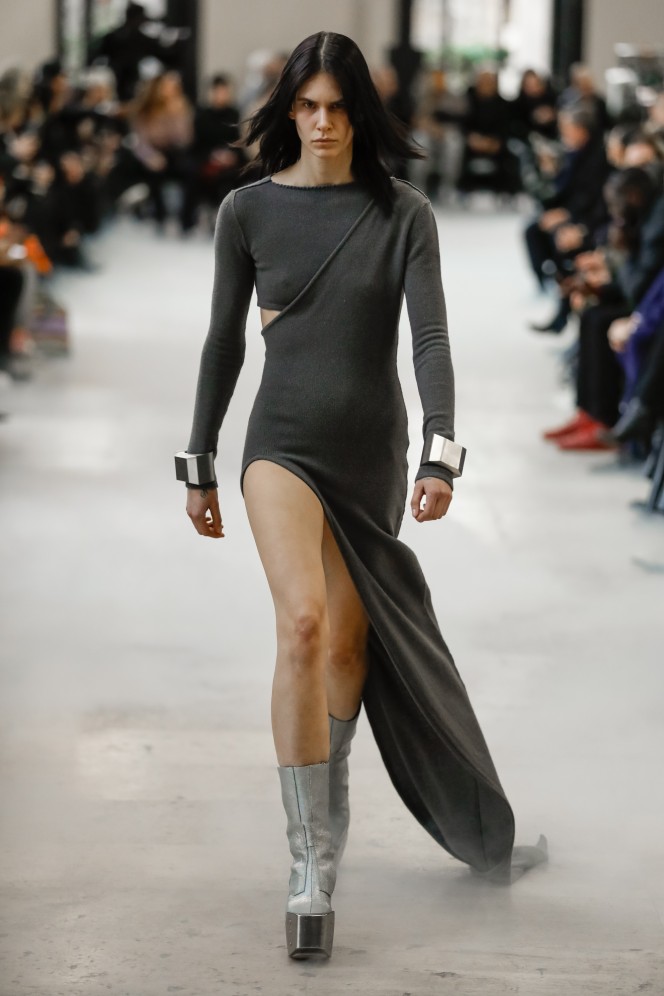 Not too long ago, Rick Owens addressed a letter to British singer Gary Numan in hopes that he’d support his vision. “The clothes have a vaguely grey Bauhaus/Klaus Nomi vibe and I saw them walking to your song Down in the Park,” he wrote to the musician. Numan agreed and recreated the song at Owens request; the creative designer found his fuel and ramped up the post-apocalyptic vibes with this collection which served as an extension of his last rock-inspired display.

Smoke once again descended upon his show space, as his wife Michèle Lamy was spotted wearing a life-sized version of his head as an accessory — it doesn’t get much more dystopian than that, does it? Like a scene straight from The Expanse, models with ponytails-cum-manes stomped down the runway in extreme platform boots with soles reinforced with metal. Two-tone jackets with extreme shoulders looked imposing, while padded capes fastened with thick chains enshrouded the women’s frames. Macs compiled of layered pieces of recycled plastic also made a comeback — this time with vinyl inserts. Elsewhere, leather dresses folded across the body into abstract sculptures, as asymmetric styles cut high at the thigh and trailed to the floor.

In regard to accessories, visor-like shades — which Owens has a penchant for — intensified the futuristic feel. Heavy-duty geometric arm cuffs felt brutalist, as evening gloves spliced at the wrist to reveal that models were carrying the other glove in their exposed hand. Oversized satchel bags in teal and dove grey were tucked under arms, but it was the thigh-high boots that really took centre stage. Stitched together to emphasise the shape of the kneecap and punctured with zips and eyelets, they were arguably the most emblematic element of a collection that suggested that Owens, as ever, will always be a step ahead. 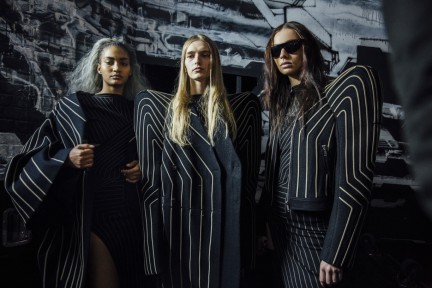