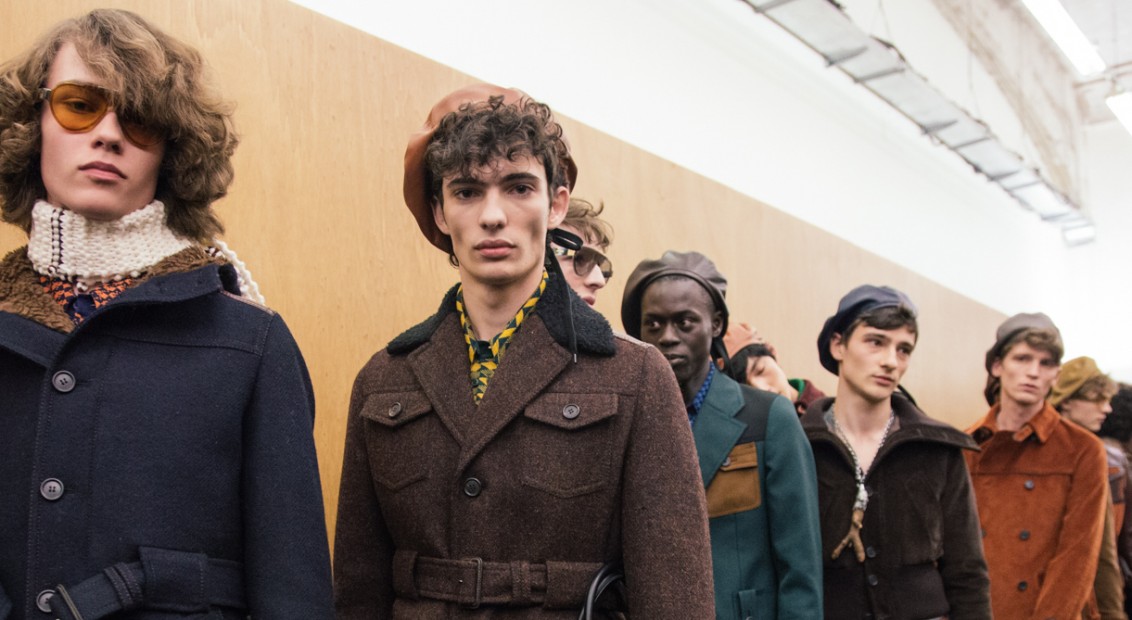 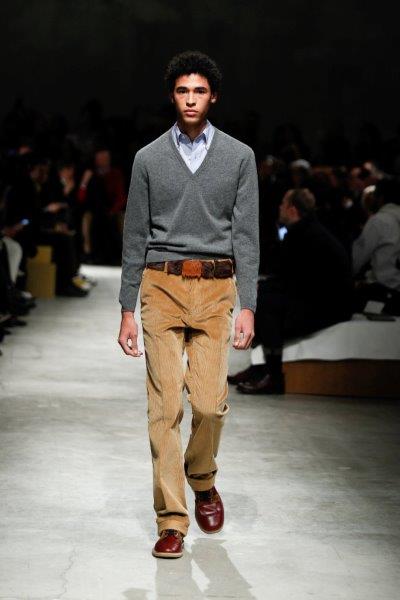 Miuccia Prada is renowned for her ability to mix the past and future, often using her clothes to mash the two together in an unexpected way that just works. Other times, she sets a collection firmly in a domain opposite to what we saw last season. And so, where SS17’s psychedelic space hikers had their sights set forward, yesterday in Milan we were presented with an altogether more classic movement.

Think 70s art school, and the quirky style of creative academics with a thing for fashion. Everything was cosy – from the rows of curved wooden seats to the beds some attendees were lucky enough to lounge on – like a retro study hole or a warmly decorated mountain lodge, where sharp minds tuck themselves away to think. Animal hide was the order of the day, naturally. In an overture to the richest shades of mahogany and brown, fur sprouted from everything from belts to hats and shoes. Trench coats came in shearling or leather (we’ve seen a few of the latter already during Milan, so take note). Fuzzy socks were worn with sandals (a Prada signature), and pukka shells and driftwood pieces hung from necklaces like well-travelled totems. Tailored tweed coats and jackets, painterly v-neck knits, berets and colourful scarves kept the vibe firmly collegiate, nodding to a time when young creatives shouted what they believed in, and brought about social change.

There was also a strong dose of Wes Anderson – the moccasins worn by boys and girls alike felt very Margot Tenenbaum. That filmic alignment makes a lot of sense for Prada: the director did, after all, design the cafe at the Fondazione Prada, and directed a short film called Castello Cavalcanti (starring Jason Schwartzman, of course) for the house back in 2013.

Those kind of nuances aren’t coincidental: the Prada fashion universe is triple-filtered through the fields of art, architecture and film. There’s the aforementioned Fondazione, a multi-purpose creative space that hosts art and fashion exhibitions, and regular film seasons curated by renowned directors. The space is a feat of design in itself. And then there are the shows, which draw from myriad unnamed references to realise ‘Thinking fashion’ – the kind of clothes that really mean something. In the context of our current world state – where so many things, from politics to culture, are in major flux – now feels like a fitting time for Mrs Prada to reference the young intellectuals that catalysed change in times past. Maybe we can take a leaf out of their book. 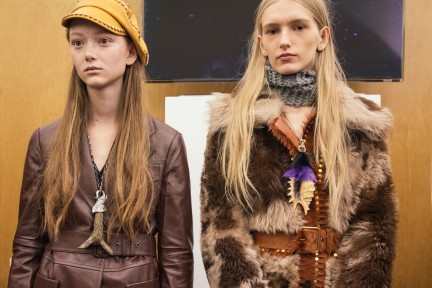