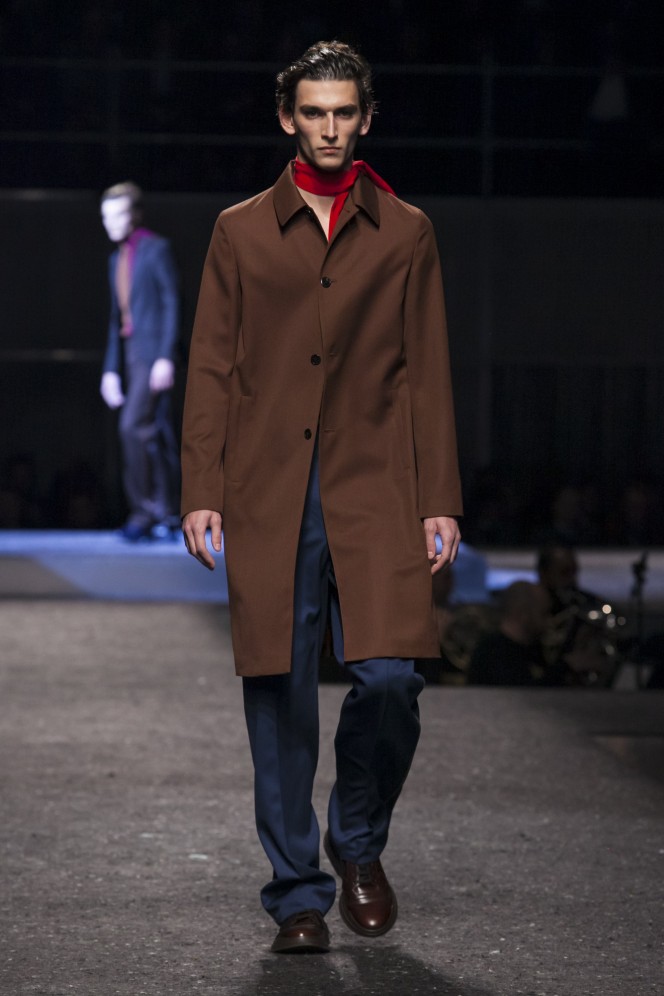 Prada, dymamic as ever, showed this collection on a raised catwalk, but with the added intrigue of four sunken pits – one of which we sat in, another housing a live orchestra, and two further housing more members of the audience.

Although nodding to the 70s, there was also a 1930s European post-war elegance – a film noir-esque movement to the shadows.

The different elements were punctuated by a schizophrenic soundtrack, lurching from the orchestra to bowel-crunching German metal from Rammstein.

The traditional bi-colour of Prada dominated – subdued reds, blues, browns – often with a touch of something extra on the collar. A thin scarf ran through the whole collection, displayed like a loose tie around the neck.

The performance was separated into subtly referenced groups: the ballet dancer, the stage hands, the photographers, the video cameras on stage and on display – as actors (models) entered they struck a dramatic pose in a shock of spotlight.

As with last season, men were accompanied by elegant women, skirts rolled ready for rehearsal. Long Mongolian shearling coats and leather dresses had structure but moved easily and lightly, cut to conservative lengths.

The men’s silhouette was subtly different throughout each act. Loose trousers gave a wider base to tighter elements above, later ballet dancer knit vests clung to the body with tight stretch trousers. Padded vests and photographer bags suggested an element of work.

Ending with the actor at rest or play in evening wear, the bohemian, transcendental intellectual shone through.

The complexity of reference, the light touch with which fierce, fleeting, dense, romantic and effortless elements seem to meet for one perfect moment – this is what makes Prada exquisite.