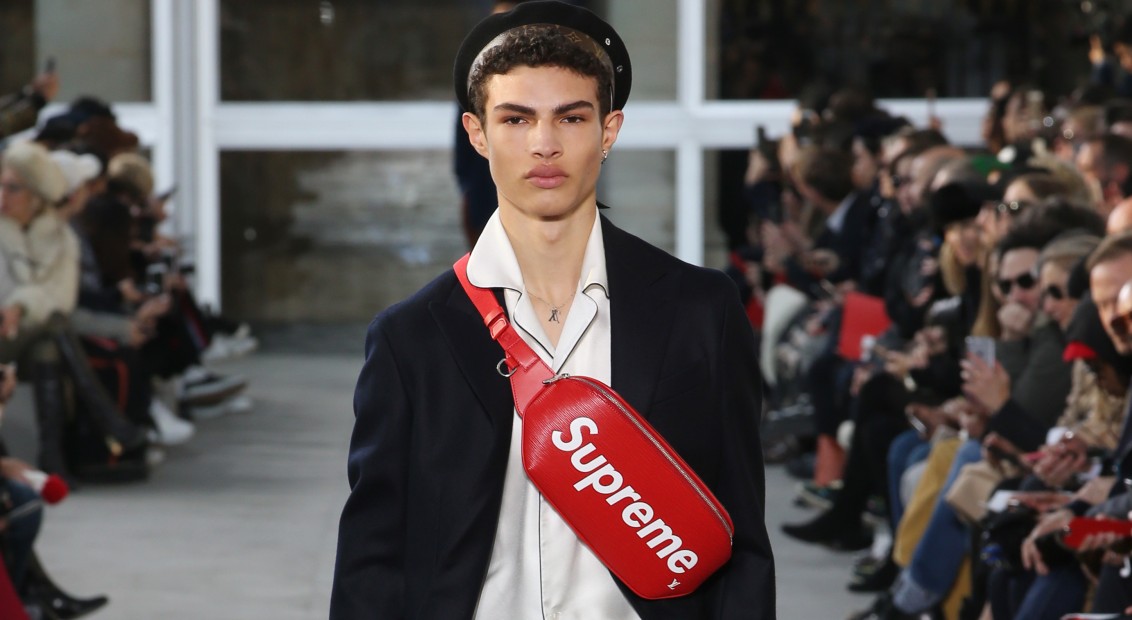 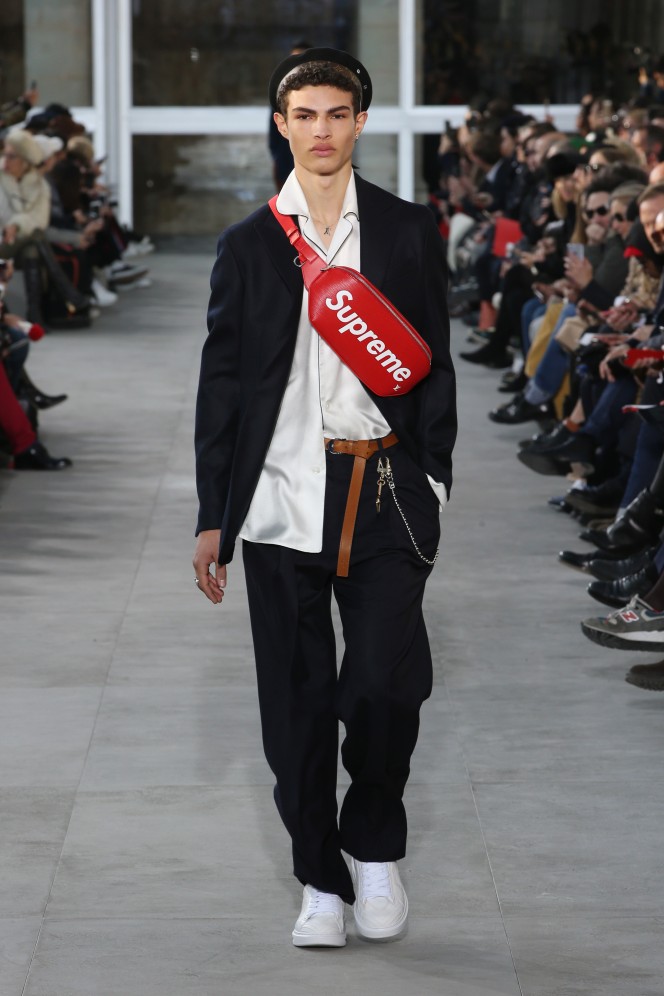 When rumours buzzed earlier this month that Louis Vuitton might be collaborating with Supreme, you could hear the digital crowd go wild. So when it was confirmed just before the luxury house’s menswear show this afternoon, it’s a wonder we didn’t break the internet.

We are, after all, talking about a collaboration between two heavyweights from opposite ends of the fashion spectrum. Louis Vuitton – the French luxury house whose history dates back more than 160 years, and Supreme – the cult brand founded in the 90s, synonymous with New York skate culture. For superfans, Supreme has a kind of magnetism that results in collections selling out in seconds, queues for in-store launches snaking around blocks – an unstoppable force of commerce with serious culture cred. Their collaborations with the likes of David Lynch, Larry Clark and Kate Moss are legendary but, until now, their association with LV stopped at the controversial use of a Vuitton-like monogram print on its boards in 2000.

For Kim Jones, men’s artistic director of the house, making things official made a lot of sense. The FW17 collection was titled ‘Friends and Heroes’, inspired by the cultural fabric of New York, from the 70s through 80s and early 90s. “You can’t have the conversation of New York menswear without Supreme right now, because it’s such a massive global phenomenon,” Jones told WWD in an interview before the show. And so we were served collision of the two brands logos, as hybrid monograms on denim baseball shirts and camo jackets, and as leather bags crafted from Vuitton leather, slapped with the iconic Supreme logo like a massive sticker.

That displacement of the familiar conjured the spirit of Pop Art, bringing light to another theme in the collection, as Jones drew from the art history of New York in the mid-to-late last century. He was thinking about the likes of Julian Schnaber, Keith Haring, Robert Mapplethorpe, Jean-Michel Basquiat and Andy Warhol – artists of a certain New York era who collaborated often (most outwardly Warhol and Basquiat, whose reportedly love-hate relationship was fuelled by each needing something the other had: Warhol’s fame, Basquiat’s youth). Basquiat’s own style shone through in fluid silhouettes and flecked knitwear that looked to have copped a spray of paint, you could see Warhol in the roll neck cashmere sweater, and the LV monogrammed police caps were absolutely Mapplethorpe.

Then there were the loose silhouettes, which drew from 70s fashion’s fluidity and the relaxed glamour of the Studio 54 crowd. Like velvet wide legged trousers, and alligator and shearling aviator jacket. Silk pyjamas were decorated with graphics of Louis Vuitton advertising imagery from the 30s, a clever reference to the 70s trend towards late Art Deco design.

There was also a flipside to those more opulent references. Like the belt chains and denim pieces, which looked to the Harlem style of 80s and early 90s hip hop outfitter Daniel “Dapper Dan” Day. Also the driving house soundtrack, which sounded direct from one of dance music massiah Larry Levan’s legendary Paradise Garage sets. From that underground New York club venue, Levan spun house, disco and garage into a pioneering cocktail that shaped dance music as we know it.

No doubt Jones had a lot of fun designing this collection. In researching the layers upon layers of history and subculture that make up New York men’s style, he must have unearthed some cracker tales. Like Robert Mapplethorpe’s photograph Grace Jones 1985, which captured Jones decorated in body paint by Keith Haring for her live performance at Paradise Garage. Coming full circle, it’s those interconnected tales – of ‘Friends and Heroes’ – that keep the New York dream alive.