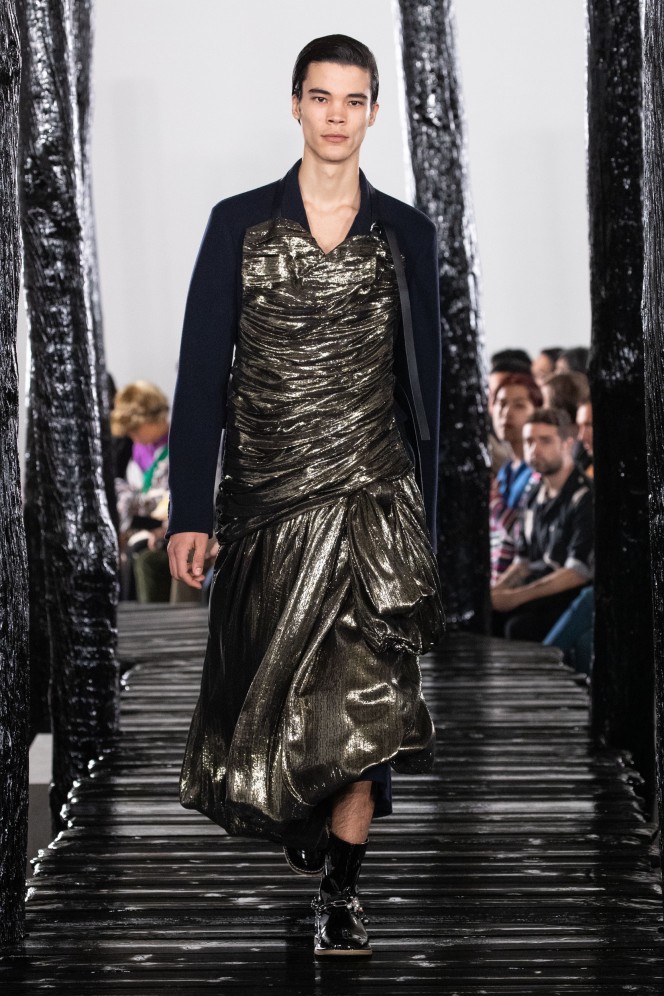 It’s been seven years since Irish designer Jonathan Anderson took the reins at Loewe, a then-under-the-radar Spanish luxury house. Since then, the experimental designer has redefined the company’s DNA: not only has he created commercial hits in the form of cult accessories like the Puzzle bag, he’s reinvigorated the mainline with his uniquely androgynous take on luxury.

This luxe element was amplified for FW20, whose show notes promised “couture opulence” in the collection’s shapes. The opening look quickly confirmed this: a strapless lamé ballgown, worn over a classic black jacket and finished with a pair of tough leather boots. These gowns, usually tightly ruched down the bodice with a gathered, balloon hem, recurred in various colourways, including metallic green and a dazzling, burnt orange.

Like many other FW20 shows, Loewe seemed to confirm that skirts and dresses for menswear are no longer anomalous – if anything, they look set to stay. Knee-length coats were sometimes belted at the waist and worn with seemingly nothing underneath; others were printed with geometric patterns and completed with cape-like sleeves; one collection highlight was a short, flared, collared black jacket, whose tough hardware embellishment elevated it to couture level.

The show notes talk about “scorched glamour”, which makes sense – there’s always a juxtaposition with Anderson; a woolen cardigan to balance the crystal embellishment, or a pair of cropped, khaki combat trousers to offset the ballgowns.

‘Androgyny’ has become a buzzword so often-repeated in fashion that its meaning has almost been lost completely, but Anderson nails this combination of soft and hard, of masculine and feminine in a way that few designers manage. On his runways, men in dresses don’t feel like a try-hard statement; instead, it simply feels like an organic evolution of menswear soon destined to trickle into our everyday wardrobes. 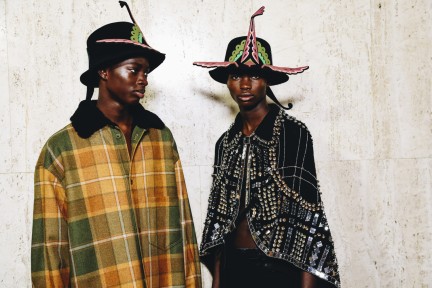