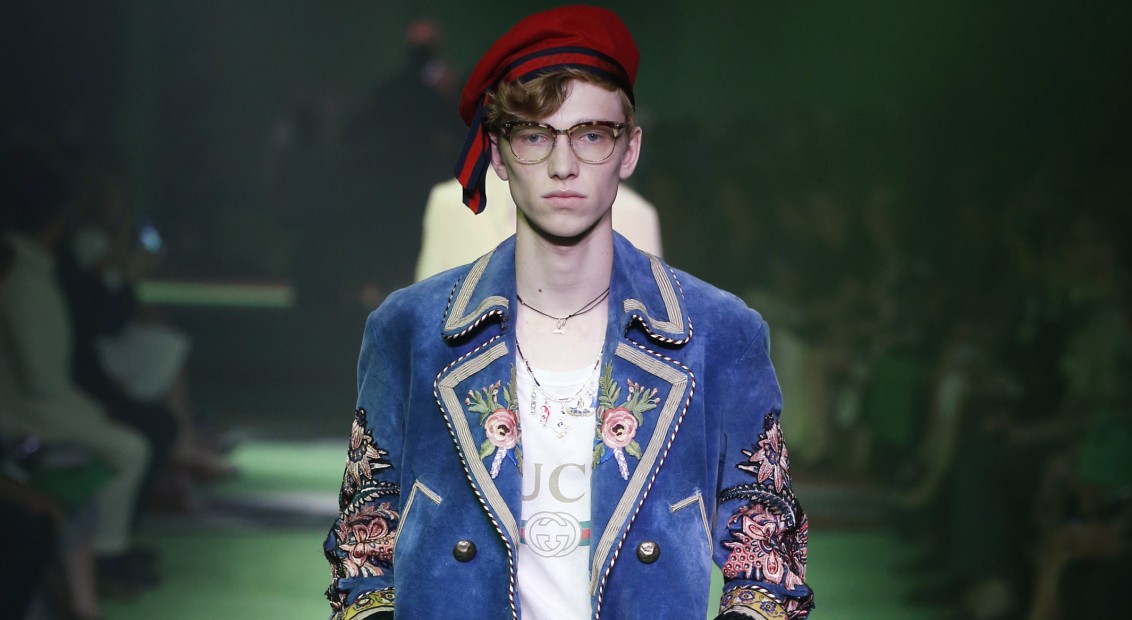 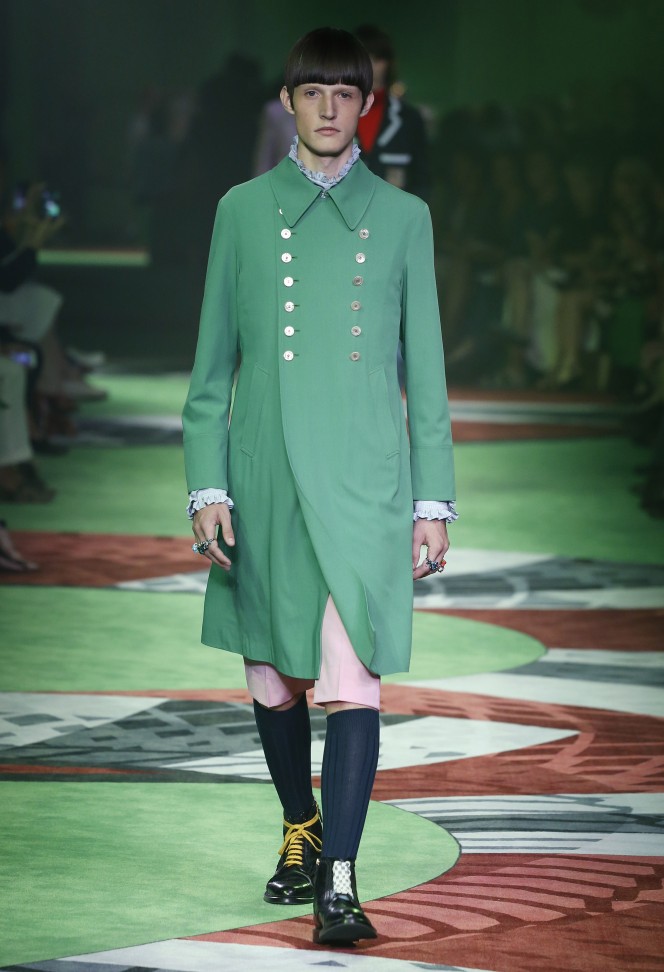 Alessandro Michele was a relative nobody when he was announced creative director at Gucci following Frida Giannini’s departure in late 2014. But his entry marked a sharp turn from his predecessor’s mantra, and it’s proved just about a major a success as is possible for a new designer at a heritage house. Completely rebooting the brand with a consistent approach to personality and product, Michele has quickly dreamt up a richly themed world. A world you feel you already know, one you want to be a part of.

There have been comparisons to Hedi Slimane’s take over at Saint Laurent, but this designer’s creative schtick is galaxies apart. Michele has so far taken a more-is-more approach to everything, from the styling – hats, belts, scarves, pussy bows, socks and so much jewellery (like the stacks of rings his own hands are never without) – to the vintage-feeling, vibrant clothes themselves, to the set where it all comes alive.

Literally everything from the seats to carpet to padded walls at the SS17 show were cast in an psychedelic shade of green. Apart from the custom made carpet that ran down the catwalk – snakes and ladders in orange and red – which as a combination made the whole thing feel very Willy Wonka. And then there were the clothes, a luxe and motley mix of trinkets and tailoring, prints and prim detail, lace stockings and raincoats, Eastern accents and evening wear. It’s a lot, yes. But that sense of theme and personality is this designer’s groove. Michele is excellent at blending references from poles-apart cultures and genres like they were always meant to be worn together. SS17 witnessed Gene Wilder meets mod; 70s suiting meets marvellous matador, silk souvenir jackets meet acid wash punk, suiting meets signature (snake embellished) slipper, Bo Peep meets Beatles… out of breath but you get the idea.

Throughout history, an unstable global economic and political climate has often equated to a trend towards downplayed style and, eventually, a flip side to the opposite. Just think of Christian Dior’s (post-war) New Look, which caught on in the late forties, a couple of years after the dark days of wartime fabric rationing ended.

Over the past few years we’ve witnessed a financial crash, a heightening state of global terror and uncertainty… in just a few hours the UK will vote as to whether it should separate itself from the EU. Madness. In response we’ve seen designers turn to minimalism and we embraced it with open arms – sombre androgyny and a stripped back mentality became the norm (or, the ‘normcore’, as the trend was dubbed a few seasons ago). Call it the Raf-response, the Philo-phenomenon, whatever you will.

But take a quick look at right now and we’re witnessing the flip side, a renaissance of flair. The likes of Michele are inviting us to try on escapism for size, to raid our wardrobes (or Gucci’s store floor, should you have the pocket money) and have a play with what we find. Kids know what Michele is on about – dressing up is a blast – and hey, we were kids once so let’s stop being so serious. Whether you enjoy a monogamous relationship with black or your penchant for glitter rivals that of a bower bird, it might just be time to loosen up. Dare you.