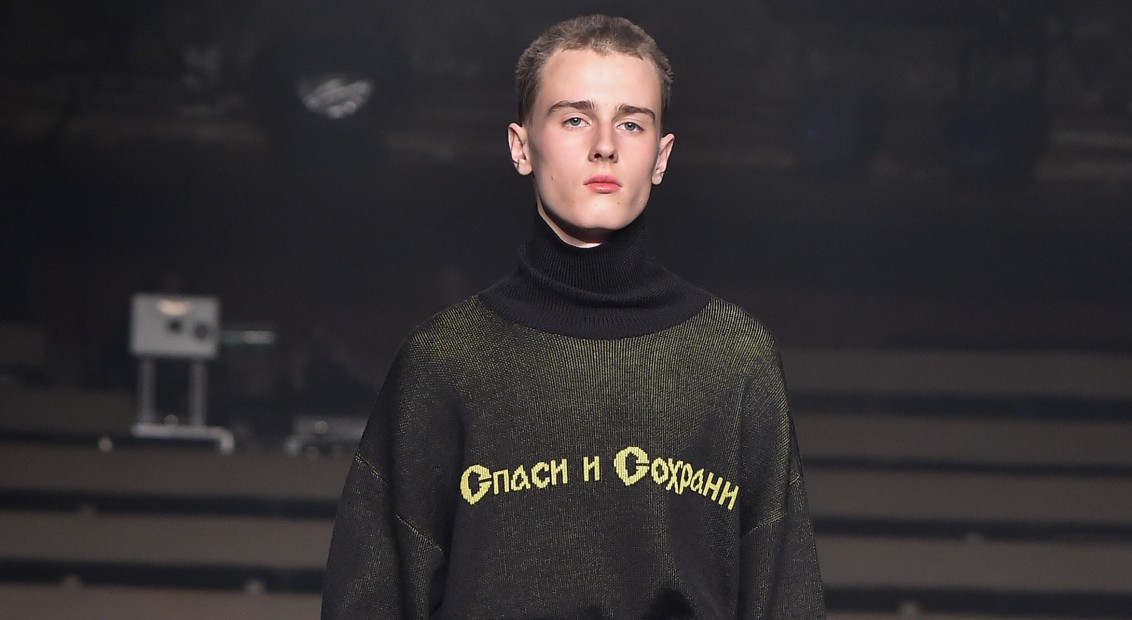 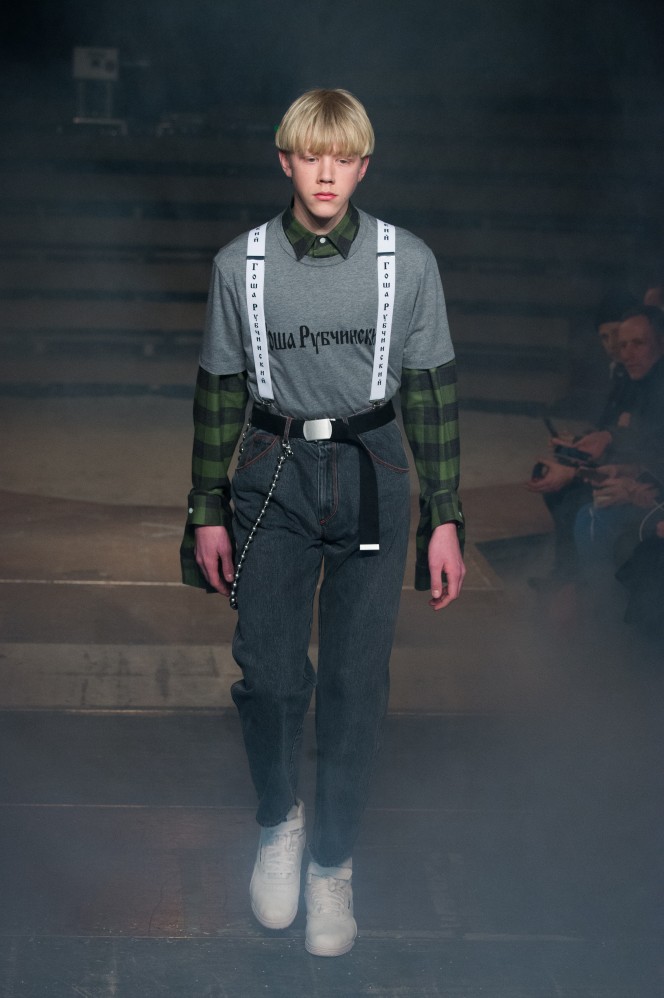 Within Paris’ run down Théâtre Des Bouffes du Nord Gosha’s boys treaded the dilapidated boards with abundant attitude. ‘Save and Survive’ was the instruction on each invite, and with smoke billowing from the sand strewn catwalk the instructions felt like solid advice in this apocalyptic setting.

A quick glance along the front row saw the reclusive Comme Des Garçons founder Rei Kawakubo making a super rare appearance, subtly sat in anticipation, a pointer of how hot this show is. Leave your celebrity baby with the live-in nanny, Kawakubo is the type of attendee who matters.

Compared to his vibrant sports-inspired SS16 collection, this season Gosha opted for darker tones (both in colour palette and theme). Held up by canvas skate belts, sweatpants emerged extra baggy, with double foot holes – an elasticated cuff for your ankle and a loose one to trail behind – forming unconventionally elegant profiles. Shearling-lined outerwear proved protection from the bitter weather and came paired with motif adorned t-shirts and the latest Rubchinskiy X Reebok collaboration (an 80s hi-top, strapped). Constructing a nonchalant style with such creative intelligence fundamentally underpins a collection such as this – tweaking the orthodox to create individualism – take the final look, for instance, a knit with dropped armholes transforming it into a flowing cape silhouette. It’s just so right.

There were punk proportions, but not in reference or tribute to the kids of ’77, this was in reference to the punk kids of 90s Russia, particularly those at St. Petersburg’s TaMtAm – a subcultural mecca that ushered in a new era of Russian cultural pluralism. Those kids wore their clothes until they dropped (either the clothes or the wearer themself). Here was a representation of the new wave, with Gosha stood at the vanguard and his distinctive logo their calling card.

The repetition of ‘future’ within the soundtrack (composed by Russian producer Buttechno), emphasised the Moscow-based designer’s stance – the best designers have the ability to look both backwards and forwards in harmony. There was an innate ‘devil may care’ attitude throughout that mirrored that TaMtAm vibe, its nihilistic hedonism and youthful zeal. It’s a romantic and self-destructive trait we all subconsciously find ourselves drawn to. With Gosha it all boils down to authenticity, he creates what he knows, what he loves, and what he lives. And it’s this exact mentality that gets under the skin of his fanatics, it’s electric.

In the case of apocalypse, keep calm, and always wear Gosha.