the 14th Maharajah of Indore

As the years passed, he amassed a huge collection of contemporary art pieces, some of which he worked alongside designers to modify to his own tastes. The result of these collaborations was an archive that spanned disparate styles, time periods and reference points – and it’s precisely this ethos that made him the ideal muse for Clare Waight Keller’s Givenchy FW20 collection.

Aesthetically, Keller interpreted his influence by aiming to fuse “tradition” and “spontaneity.” So, classic double-breasted suit jackets were buttoned over high-shine latex turtlenecks, the latest in a series of collaborations with latex couturier Atsuko Kudo. A cable-knit jumper was deconstructed and left to hang loosely over the body, whereas the hemline of a printed tee was interrupted by a postbox-red cummerbund, an attempt by Keller to “subvert classic proportions.”

The collection’s highlights came later in the show, inspired by the opulent, jewel-heavy style of the aforementioned Maharajah. This was also when Keller’s commitment to couture (she almost immediately threw herself into making couture a house priority after being appointed in 2017) became clear: ornate patterns began to snake across buttoned-up shirts and neatly-tailored blazers; finally, a couture topcoat came fastened with a heavyweight safety pin and beaded with glimmering black swirls.

As always, the sharp tailoring and dark romanticism of Givenchy were front and centre, reinterpreted again by a designer whose respect for the brand’s legacy is evident. This wasn’t a reinvention of menswear, but an evolution of the new tried-and-tested blueprint – marked by unexpected flashes of latex and hardware – fast becoming Keller’s signature. 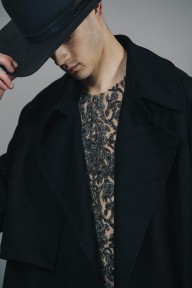