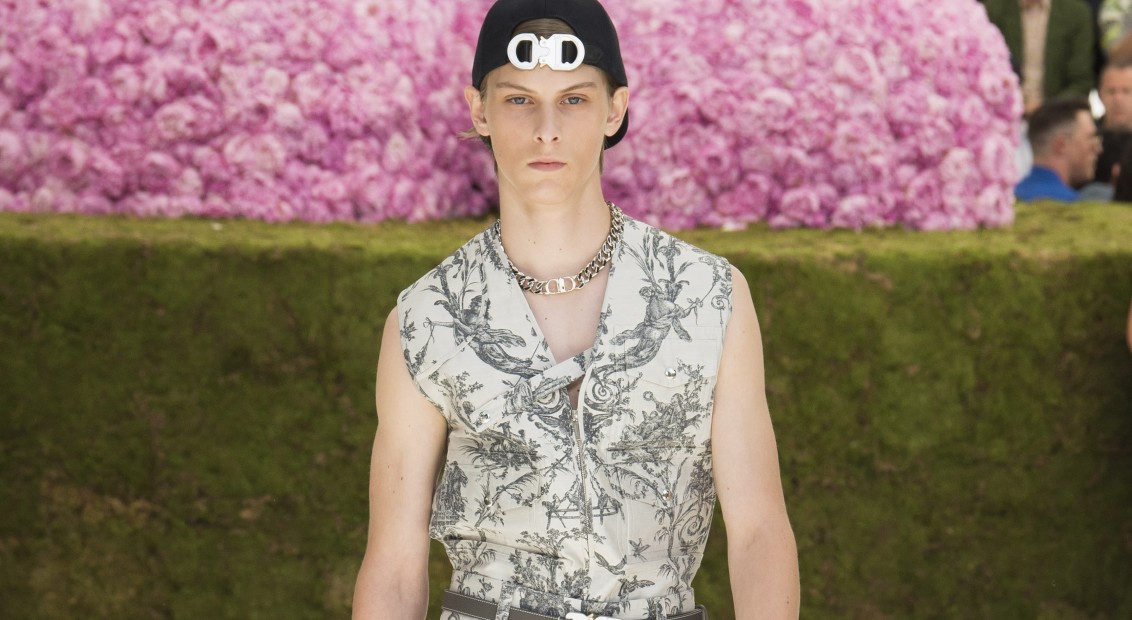 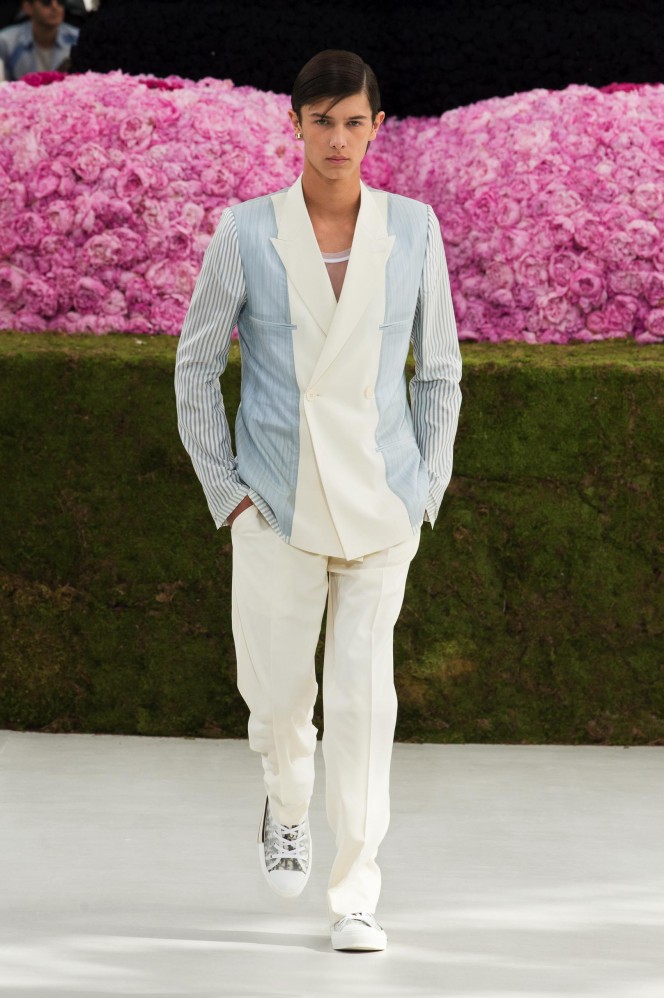 When a designer first joins a house as revered as Christian Dior, the instinct is to dive headfirst into those vast archives. Jones took this one step further, tracing the history of Christian Dior ‘the man’, and Christian Dior ‘the house’. “In his autobiography, Christian Dior reasoned that there are two Doors – the man and the myth”, read the press release. “[This] is a dual tribute – to the reality of Dior, and the fantasy.”

At the middle of the venue – a vast, circular canopy above amphitheatre-style tiered seating – stood a work by US street artist Kaws; a towering statue of his BFF character reimagined in 70,000 flowers as Christian Dior himself, and his pet terrier, Bobby. The flowers were no coincidence, Christian Dior revelled in flowers and cultivated them in his Normandy garden.

The collection felt super fresh, based in stark white it branched out with Jones’ inaugural statement, here “translating a quintessentially feminine couture identity into a masculine idiom”. But what exactly did this mean? In terms of suiting, it meant a new, much softer shape than that of Jones’ recent predecessors Hedi Slimane and Kris Van Assche – who both opted for a more angular, slimmer approach. It meant rounded shoulders and a romantic, draped silhouette inspired by Dior’s 1950 ‘Oblique Line’ suit; broad at the shoulders and elegantly drawn in at the waist with a single kimono-style fastening on the side. And it meant a subtle colour palette consisting of pastel tones, including one petal pink hue drawn from Dior’s childhood home in Granville, France – a talismanic colour that featured heavily throughout Monsieur Dior’s oeuvre, such as his iconic 1948 soir de fête gown.

But don’t mistake pink for fragility, there’s a glamour of defiance in the shade that made for a gripping tension. Here, that energy fizzed out the speakers – a seat-rumbling mix of Underworld’s Born Slippy, Insomnia by Faithless and Orbital’s Halycon, courtesy of Diplo – and exuded from Jones’ commitment to community and collaboration: jewellery was created by Ambush’s Yoon Ahn; Matthew Williams of Alyx designed a new, bulky ‘CD’ metal belt buckle that repeated on caps; and Stephen Jones crafted millinery based on Monsieur Dior’s own creations.

A vibrant dialogue between now and then, Jones pillaged Dior’s peerless couture blueprint and reinterpreted the savoir-faire of the House’s ateliers to menswear. Taking his fabric cues from archival pieces, jackets were rendered in exquisitely ethereal overlays of organza – both silk, and a technical sportswear version – shirts were elevated via appliquéd feather-embellishment, and toile de jouy patterns were borrowed from the wallpaper of Christian Dior’s original 1947 flagship boutique, weaving narratives across jacquards and leathers. Elsewhere, Jones revealed a menswear update on the house’s iconic saddle bag, reimagined as both a belt attachment and rucksack. Throughout, the collection was punctuated by botanical motifs – representing Dior’s love of flora, and his “femmes-fleurs” – and a new Kaws-designed iteration of the house’s iconic bee logo was set free, this time redrawn with a cartoonish personality.

Tradition subverted with absolute finesse: binding the tradition of tailoring with the modernity of sportswear in a tight future-ode to Monsieur Dior and the men his legacy stands for today. Inside the grounds that play host to France’s Garde Républicaine, it felt symbolic. Here was the compelling inception of a new guard at the house of Dior.