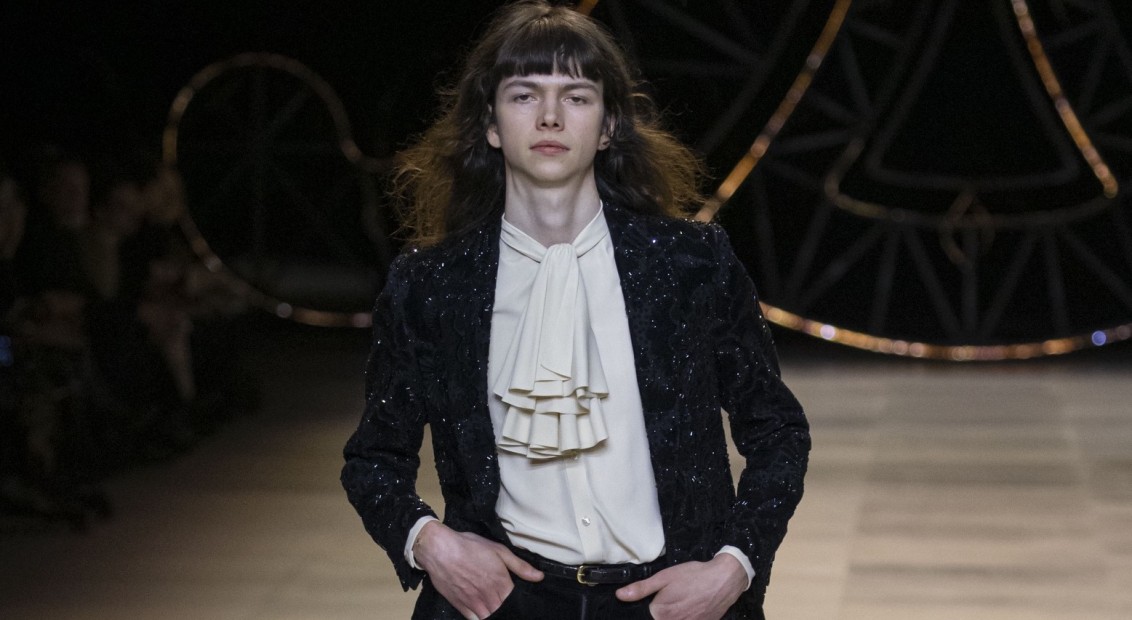 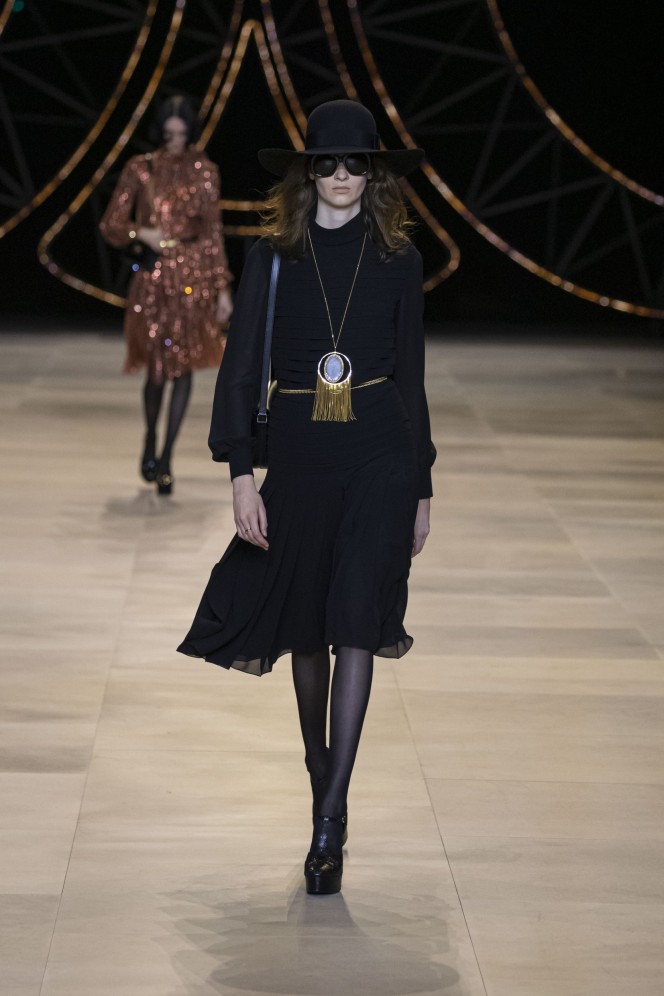 It started with a whisper. “Get out of my head” breathed Sofia Bolt (the project of French musician Amelie Rousseaux), suggesting that Hedi Slimane’s latest Celine offering would sear deep. As Reptile from the new Haute Parfumerie collection filled the room – “a scent for centre-stage” – senses began their ascent.

The sound of robotics creaked, as lights flickered and shifted hydraulically into a new configuration. These incredible, shapeshifting intros to Slimane’s shows have now come to feel like the walls of reality itself being maneuvered in order for us to experience on a much higher level.

Once aligned – into the house’s ‘CC’ monogram – the first model slid onto the runway in a witchy silk dress, wide razor brimmed hat, fringed necklace, and the kind of pitch-black aviators that say all you need to know.
Pace set. Keep up.

Having paused this season’s menswear show in favour of showing men’s and women’s together here, it all clicked – each look was designed as unisex, to be bought, worn and shared by whoever. Again, that dialogue is crucial for Slimane, who writes for a generation in equilibrium: from his days at Dior Homme switching guys out for girls, to the most recent chapter of his Portrait of a Performer series, in which he captured UK musician Ryan Turner in pearls and lace.

A new romanticism was writ large across a collection dedicated ‘A Ma Mère’. As signature velvets lined the way, tweed blazers, laced suede, pussybow blouses, culottes, kaftans and leather bikers signposted the house’s evolution from Vipiana to Slimane. Paris’ hedonistic 70s were outlined through these narrow, elegant silhouettes, etched in 40-denier tights and 80mm heels. But think macro – these individual figures are part of a larger canvas as Slimane continues to illustrate culture through his work, capturing the flow of the real with rhapsodic strokes.

Impeccable embroidery (all done by hand) shone throughout – giving the shimmering Effiel Tower a run for its money – reflecting this season’s artist collaboration with the late French 21st-century sculptor César (who recently had a posthumous retrospective at the Pompidou). Here, Slimane honed in on his Compressions series. Emerging from a chance meeting with a scrap-metal merchant in Gennevilliers, the artist used a hydraulic press to squeeze cars into monumental sculptures, seizing the material, crunching it up and making it glisten in new form (think back to this show’s hydraulic light intro and join the dots). Spun through Slimane’s lens, this practice becomes a limited-edition, artisanal jewellery range designed with a retractable hook that enables the pendent to become a stand-alone sculpture.

In ruffles, paisley and gilded tunics, Slimane tapped our collective archetype of the roistering minstrel. Romantic at heart but decadent and dangerous to know, this feeling riffed on the days when goth ran with psych: a time when American beat bands swapped smoking weed for dropping acid and the Stones were busy sympathising with the devil. While Paris’ historical occult pull echoed deep, Slimane’s own sorcery is equally enchanting.