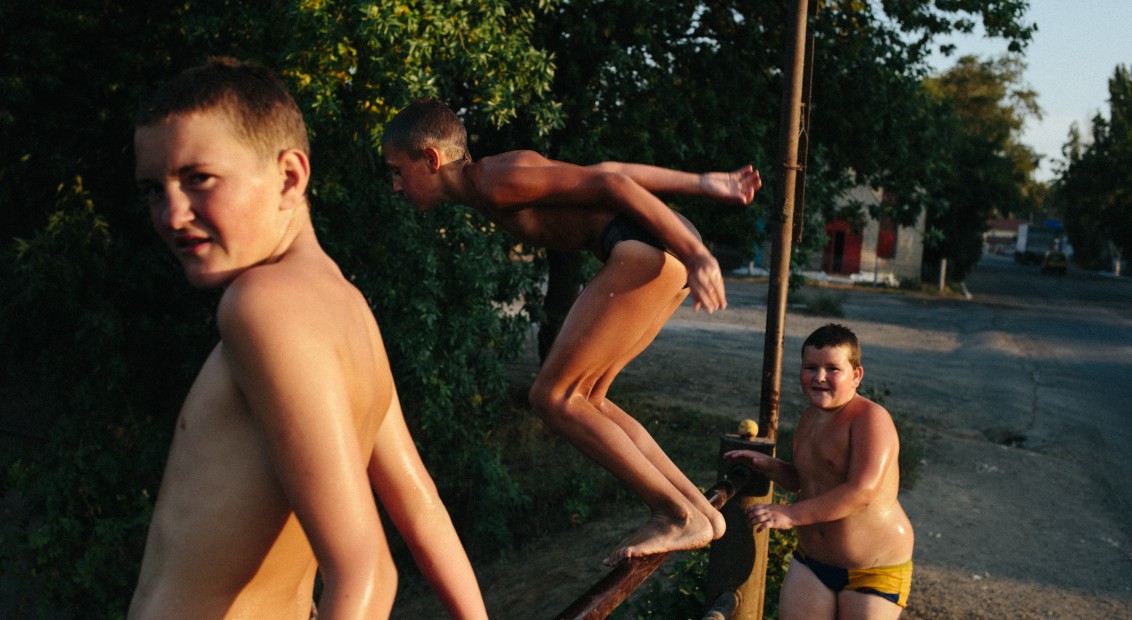 Christopher Nunn’s portraits of youth and unity in fragile Ukraine

Photographer Christopher Nunn first started documenting the Ukraine four years ago, capturing the people and places of the country’s fragile east. On show this week as part of the Independent Photography Festival, the resulting project, Holy Water, is a poignant visual journey through everyday reality against the backdrop of the country’s socio-political turmoil.

As Nunn here explains, the images are framed by themes of friendship, escapism, unity, alcohol and religious iconography. Fragments of a larger picture, these moments are the human side of a frozen conflict simplified by the media.

For Nunn, this is a highly personal project, given deeper meaning by the fact that it began with a visit to Kalush, his grandmother’s birthplace, in 2013. As such, his understanding of the current situation has been broadened by the knowledge of his grandmother’s experiences as a person displaced by war. 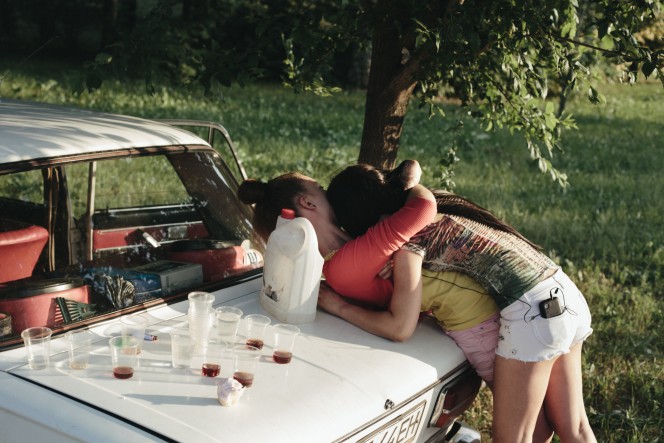 Tempe Nakiska: When did you first go to the Ukraine, and what were your initial perceptions of it as a place?
Christopher Nunn: I travelled there the first time in 2006, and again in 2007 and 2010, but they were tourist trips, sticking mainly to big cities. I went on my first proper trip in February 2013 and that was the first time I’d experienced winter in Ukraine. I always found Ukraine quirky, funny, raw, brutal and beautiful.

Tempe: It seems like your knowledge of your grandmother’s experiences are in tune with this project. Despite the time gap, have you drawn many parallels between her and your subjects?
Christopher: My grandma was taken from her village as a teenager by German soldiers during WWII. She worked as a farmhand in Germany and then eventually ended up in England as a displaced person. Her story was always on my mind a little bit, but it became more prominent over time as I met elderly people on both sides of the conflict affected by the current war. Some of them recalled memories of living through the second world war and they were very similar to stories told by my grandmother. 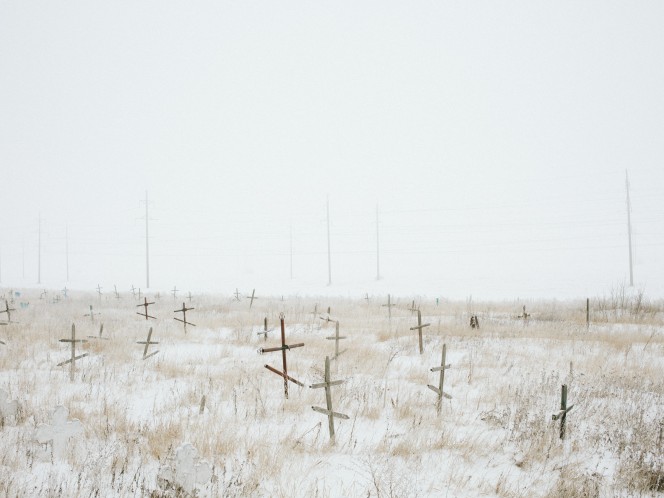 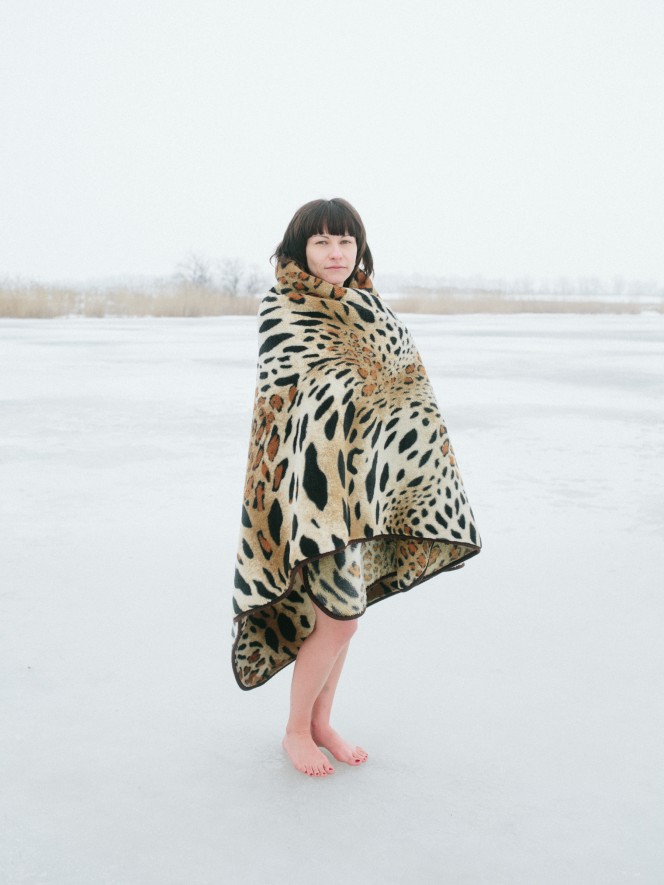 Tempe: Can you describe one of the most memorable moments you have experienced in the process of creating Holy Water?
Christopher: Holy Water is a small collection of images from different trips to Ukraine, like a flow of photographs. Some of the images were from my very first trip, so obviously there have been many memorable moments during that time.

I’d say the story of meeting Valik, the guy with the prison tattoos sat in his kitchen was very memorable, and also meeting Leonid, the man walking into the water with the power station chimneys in the background. They are both dead. Valik had a brain tumor and Leonid was a soldier and was killed near Donetsk airport shortly after I took that picture.

“The war has obviously divided people to a tragic extent, but I have also seen a lot of unity.”

Tempe: What would you say the overwhelming mood in the east of Ukraine at the moment? Is there a sense of disparateness, or unity?
Christopher: Both. The war has obviously divided people to a tragic extent, but I have also seen a lot of unity. People are trying to live with this war that should have ended long ago. 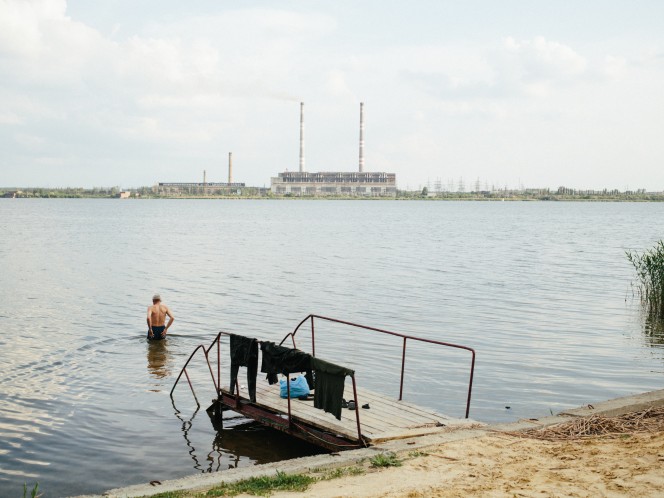 Christopher Nunn’s exhibition ‘Holy Water’ runs until 14th May at 22 Calvert Ave, London E2, presented by the Independent Photography Festival (IPF) and Calvert 22. To mark its opening tonight, the artist will be taking part in a Q&A about the project. RSVP here.

For more information on the IPF 2017 line-up, head to the website.