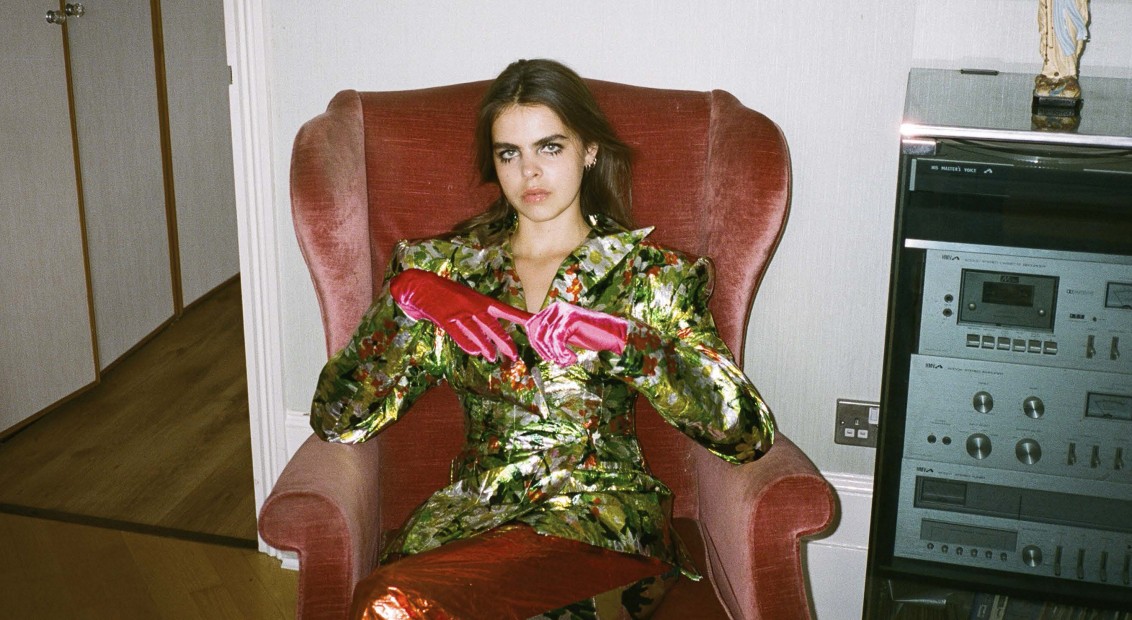 June is on our doorstep, which means fashion students from across the UK will soon be sending out their final collections in their schools’ runway shows. We’re gearing up by revisiting our profiles on two exciting talents from Central Saint Martins MA Fashion 2016 cohort.

Take a hit of S&M, mix with overblown power shoulders and a heavy dose of retro florals and you’ve got a vague taste of Richard Quinn’s clothes. Beautiful, dangerous, and fabulously unhinged. For his final MA collection, Quinn sent faceless models out in head to toe looks (literally – they breathed through tiny eyelets in the rose-printed fabric), spinning fifties and fetish into the ultimate damaged fairytale. A self-confessed obsessive who interned at Christian Dior in Paris and Richard James on Savile Row, Quinn cut, dipped, and screen-printed his way to the Central Saint Martins graduate show, realising the holy grail for hardcore believers in more-is-more. That Quinn cites the whimsical designs of John Galliano and Jean Paul Gaultier as favourites makes a lot of sense. But with goals to open a multi-purpose London print studio, it’s clear he’s as hooked into real life as he is fantasy. 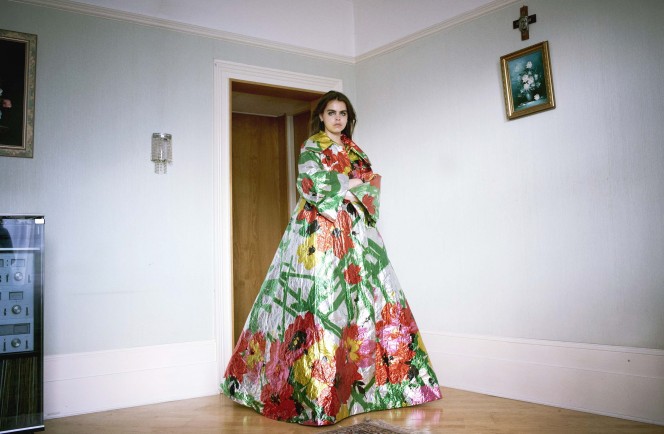 All clothing by Richard Quinn FW16

Tempe Nakiska: Nothing about your collection feels like the clothes are wearing the women, there’s a feeling of power and impact both ways.
Richard Quinn: Impact was definitely number one on the list. Even when we were in fittings, everything was always full on, I wanted to contrast elements you would normally never put together, I wanted every woman to be a different textile.

Tempe: It certainly seems like you’ve created a world for these women to exist in.
Richard: Yeah for sure, and I definitely think of it as a starting point, it can always get crazier.

Tempe: What were the main things you were thinking about when you envisioned the collection? There have been quite a few Leigh Bowery comparisons…
Richard: Everyone always says Leigh Bowery but it actually came from [artist] Paul Harris. It’s interesting to look at Leigh Bowery’s style, but it’s more so to see where his style actually originated from – even some of the S&M books we were looking at have such a Leigh Bowery context, but they were made 40 years before he was doing it, he utilised a lot of things that already existed, and pushed them further. There’s this Paul Harris book, it’s basically upholstered figures and there’s this one picture in the book where all the figures are different textiles. Seeing that image was the moment when I knew what I wanted to do.

Tempe: Were you also thinking about fetish and S&M?
Richard: Looking back, I think I would have added more in; I’d love to do floral latex and stuff like that. But if I had loads of it in the MA then [everyone] would have been like, “It’s S&M!” But I do think there is a nice play on this and references like Dressing for Pleasure are quite nice. There’s an image of a woman all in leather on a floral couch, which I looked at a lot.

“I always think fashion should be exciting.”

Tempe: I’m interested to know what the vibe is like between students, is there a feeling of competition or is everyone creating such a different concept that it doesn’t matter?
Richard: I was in my own little world. Being in the textiles studio, I wasn’t in the main area anyway, and the beauty of textiles is everyone is doing something different – different scale, different textile. When you’re constantly thinking about developing your own work you’re not thinking at all about what anyone else is doing.

Tempe: Can you take me through the process of making the textiles, there were quite a few techniques involved?
Richard: The mackintosh and the S&M look are all calico that’s been painted and treated. Because I had the Stella McCartney scholarship I wasn’t allowed to use any leather and fur, which was fine because I didn’t really want to use those materials anyway, I think as an MA level textile designer if you go into a cupboard and go, “I want that black leather” it’s really lazy.

Tempe: What other processes did you use?
Richard: If you see how army helmets are printed, they actually dip the helmet, like marbling, and I played with dipping the print onto surfaces like that. I also used foil –those energy blankets you get at the end of marathons – and they were really hard to work with because of the temperatures involved. Oh, and the heat pressed gloves too. I did one and it worked, and then I spent two weeks working on them while the teachers were away and when they came back there were about 30 of them [laughs].

Tempe: Would you say you’re obsessive?
Richard: I’m very obsessive. I don’t think I notice how obsessive I am ‘til someone tries to help me or I outsource something. I automatically think that everyone else will be as bothered about finishings as I am, stuff like coating the mackintosh you have to wait for the layers to set and it was really hard to let someone else do it because they would fuck it up. With stuff like prints as well – the prints are based on existing prints from the 60s, and I rejigged and collaged them in different layouts. With the nine-colour screen-print I was adamant that they had to be hand-drawn on the film, but you’d get people saying, “No, just separate them on Photoshop” and I knew that the quality would diminish doing that. I was like, “If I’m going to spend £120 on this fabric I might as well be printing the right thing.” 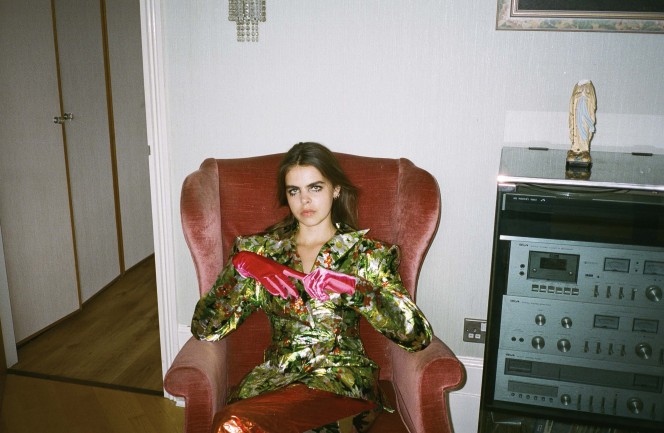 All clothing by Richard Quinn FW16

Tempe: Otherwise, what’s the point?
Richard: I’m a really calm person but the one phrase that really sets me off is, “It’ll do” or, “Nobody will notice.” When it’s on the catwalk they might not notice, but in the showroom someone will. For the sake of a small amount of extra time, let’s just do it properly.

Tempe: Do you think consumers today value that degree of integrity and quality of design?
Richard: Yes, when you’re speaking to a consumer who wants something different and gets fashion. You can tell them, “Yes, it’s slightly more expensive but it’s all screen-printed in the UK and all hand-done by the designer, and it will fit you perfectly” and they will get it – especially when it’s one of six or ten. I think a clever designer makes stuff that people desire. The word ‘wearable’ just depends on the person.

Tempe: Was fashion what you always wanted to do?
Richard: I always had an interest in it, but it’s not like I was dressing up with my sister or anything like that. I was doing a fine art
A Level and I became really obsessed with photo shoots – big-scale photo shoots, like Tim Walker. Then I started looking at the fashion and realised you could actually create all this. I started studying graphics and found it really boring, it was almost like I was trying to style stuff that I would want to produce. All the graphics I was creating were more like prints, so I was told I should go into fashion print.

“The word ‘wearable’ just depends on the person.”

Tempe: Earlier when we were chatting you mentioned wanting to open a print studio, what’s the idea?
Richard: I want to open a creative space that everyone has access to, a space that students from the main colleges and textiles courses can come to where they can afford to print, as well as being a functioning textiles studio where I can have my own fashion development, my own cutting and sewing, and where everything can be made in London. I would also like to train people up, doing short courses in the art of screen-printing. I think now more than ever before people want to know about craft. Even if it’s printing a tea towel, when you show people how screen-printing is done they’re dumbfounded.

Tempe: Knowing how something is made means they connect with it more, too.
Richard: Exactly. And if I was in first year and someone from the MA course who’d just graduated said, “I’ve got my own studio, come along and you can print your own stuff, you can have help with the line up,” I’d be like, “Yes!” It’s just really rare, it’s definitely a gap. There are such great young designers around but it can be really tough resource-wise. When I was doing the MA and trying to get things done outside, even to get a small sample for a flocking look I had in mind was like £150, so I couldn’t do it. To have a place where it’s actually accessible would be great.

Tempe: What do you think can make a recent graduate stand out in trying to break into the market?
Richard: I always think fashion should be exciting. I have always loved [John] Galliano and [Jean Paul] Gaultier, their shows from the 90s were insane – they were real shows, the pinnacle! – and everyone references them. So when you get a designer showing a presentation as a watered down version of what they want to sell, I just think, “No.” You need to offer something different if you’re going to make it.