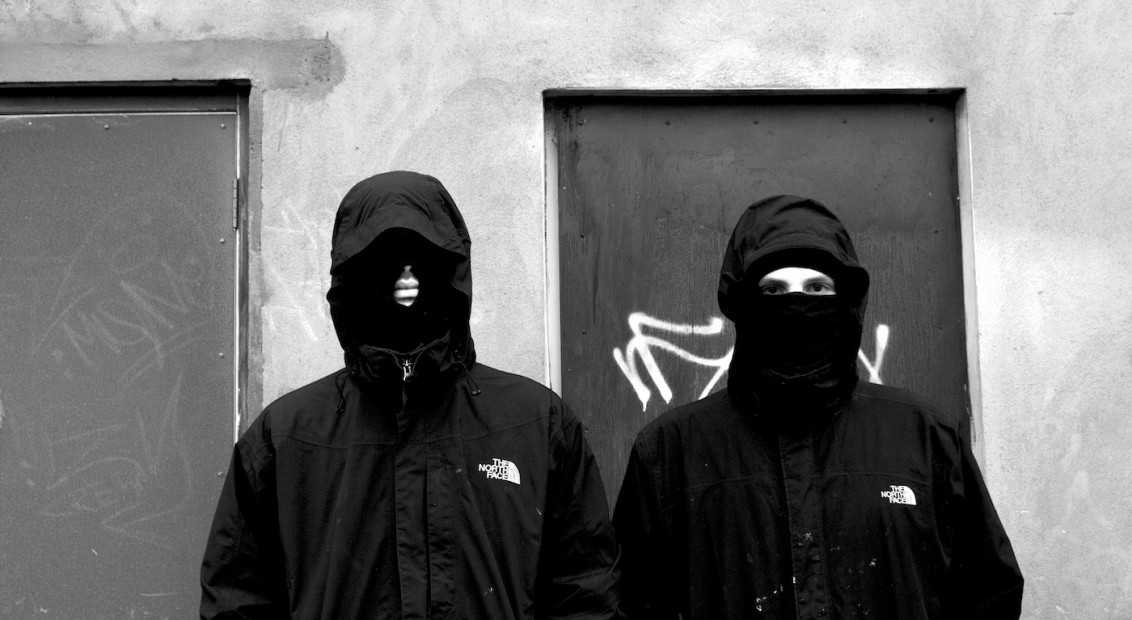 It’s not just walls that act as canvasses for graffiti art – in the mid-70s, the New York street art scene was centred around the Bronx’s subway cars. And today in Paris, the sides of trucks play host to insurgent art. After visiting the French city, London-based documentary photographer Marc Vallée discovered these revised ideas of the moving gallery on a whim and decided to document the trend via his zine titled The Graffiti Trucks of Paris.

As Vallée tells us here, Parisian street artists have claimed the power of the mobile mural. Plastered with illustrations, scenery, cartoon characters and tags, trucks and vans that move consumable goods around the city have become mobile canvases. Whether it’s tagging, a political statement or a disruptive idea, these vehicles carry their message from quartier to quartier just like visual artist and rapper Fab 5 Freddie in 70s New York.

Vallée specialises in exploring this tension between public and private spaces with a particular focus on youth culture: like with his previous zine, Vandals and the City, completed after a year documenting a London graffiti crew and exploring their relationship with their urban surroundings. Having documented different aspects of youth culture for more than twenty years, his pictures, zines and photo books have been published and exhibited worldwide – find them in the library collection at the Tate Britain and the Museum of Modern Art (MoMA). Here, Vallée talks the importance of the mobile gallery, graffiti art as a commercial commodity and how Larry Clark’s KIDS jumpstarted his entire career. 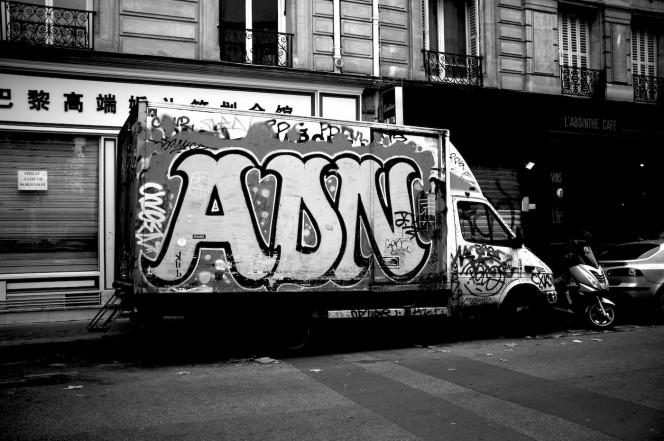 Lina Psaila: When did your fascination with photography and documentary photography begin?
Marc Vallée: When I was at art school here in London in the mid-90s I spent the summers working at an arts camp in south New Jersey in America. Teaching photography by day and shooting my own stuff on my days off. I mainly documented friends back then, skaters, punks and surfers. Developing the film and printing in an old converted chicken coop late at night. Even back then the work was documentary but with an autobiographical twist. One day a friend showed me an article in The New York Times about a photographer making a film in New York City about 24 hours in the life of a gang of skaters, that photographer turned out to be Larry Clark and the film was KIDS. Pretty much everything clicked for me in that moment.

Lina: Who did you look up to as a child with regards to visual art?
Marc: I grew up in west London in the 80s and went to a local comprehensive school. I was really lucky to have a brilliant art teacher, I was such a pain in class but she made a real positive impact on me. I was also lucky that my mother used to take my sister and me to all the art galleries and museums in London. Those two things pretty much got me hooked on art at an early stage.

Lina: What compelled you to specialise in documenting street art?
Marc: After I graduated from art school I worked for Sleazenation magazine, Adrenalin magazine, and I was signed to PYMCA (Photographic Youth Music Culture Archive). I was shooting some fashion back then but mainly music and youth culture stuff. After many, many years, I started working in photojournalism covering political protest and public order for eight years. During that time I ended up working on investigations for the Guardian and the Financial Times on police surveillance of protesters and journalists, as well as campaigning on photographers’ rights and press freedom. It was a brilliant and intense time: I think we did some important work but it did take its toll. So I decided to go back to where I started with documenting youth culture.

Lina: Sure.
Marc: This time though, I got into self-publishing and working more independently, away from the gatekeepers of the media and art world. This approach opened up a whole new way of working. I decide what I want to work on, what I want to document and then published it when the work is ready. Reaching an audience that is interested, invested and cares about the work.

“It’s a mixture of reasons and motivations, sometimes it’s the joy and rush of painting high up on a roof late at night, sometimes it’s just a big fuck you to the world and other times it’s something more considered.”

Lina: What were your findings with regards to the differences of graffiti art on illegal and legal surfaces?
Marc: With Vandals and the City, I spent a year documenting a young London crew who’d paint both illegal and legal walls and spaces. In practical terms, shooting the legal stuff is time: more time for them to paint and more time for me to make a picture. With illegal painting and tagging, you have less time which brings a different feel and energy to the experience. I hope that comes out in the images. The tension between what is allowed by the state and what is not is interesting and is pretty much what the work is about.

Lina: What do you think about the consistency of tagging as an art form through the years? What’s the appeal today in comparison to late 70s Bronx, for example?
Marc: For me, tagging is a form of artistic expression and is as vital, if not more so, then a piece of street art behind perspex on an east London wall. I’m not dismissing the skills and talent of street art, far from it, but tagging has a power to it, and a skill in pure marking terms that just blows me away. That’s why I’m interested in documenting the people who tag or do throw ups.

Lina: What have you learned about this duality of ‘value’ in street art? In certain circumstances, it’s viewed as antisocial and criminal behaviour whereas in others it’s used to add value to a product or establishment.
Marc: Capitalism will try and commodify everything and anything if possible. Graffiti luxury bags are just one example of that. If a fashion designer is truly inspired by graffiti that’s cool, I know I am. In the context of the city, graffiti can be used to sell a new luxury tower block of flats because graffiti is read as cool, gritty and hip and the developer will use that in ads on the billboards sounding the construction site. But if a kid tags that block it’s criminal damage, I think that tells us all we need to know. 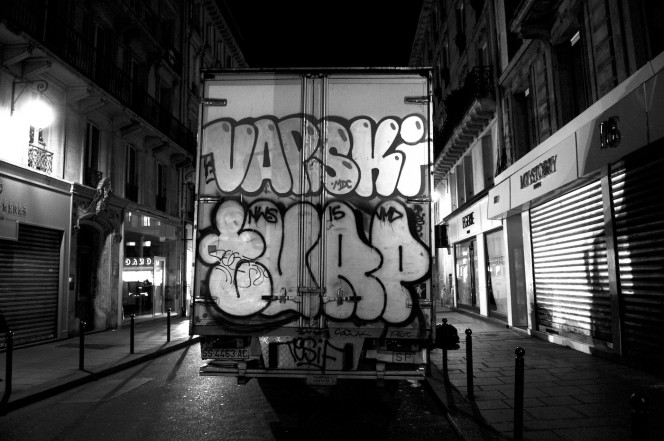 Lina: After spending some time with street artists for your project Vandals and the City what did you come up with, with regards to their motivations and vision?
Marc: It’s a mixture of reasons and motivations, sometimes it’s the joy and rush of painting high up on a roof late at night, sometimes it’s just a big fuck you to the world and other times it’s something more considered.

Lina: How did you come across the trend of Parisian street artists spraying on trucks? And what made you decide to document it?
Marc: Despite having a French surname, coming from a French family and living not that far away in London, I had not been to Paris in twenty years. I was there last year staying in the Les Marais neighbourhood next to the Pompidou Center and on my first night out I saw a truck covered in graffiti on my way to a bar with friends. Over the next few days I just saw them all over the place and by the weekend I went out to shoot them in a serious and considered way and I started to think this might be a new zine. On that first trip shooting the trucks, I saw the Brassai Graffiti exhibition at the Pompidou Center a few times, Brassai spent 25 years documenting the graffiti on the walls of Paris. The show just blew me away and the zine started to became more about the idea of the moving graffiti walls of Paris rather than the graffiti itself. The Brassai show played a major part in how I saw the city.

Lina:What are you working on now? Any future projects for this year?
Marc: My next zine is in the works and it’s not about graffiti, it’s about a French male sex worker in London and the politics of sex work. And in the summer I’m taking part in the London Festival of Architecture at an event called Graffiti, Memory and the City.