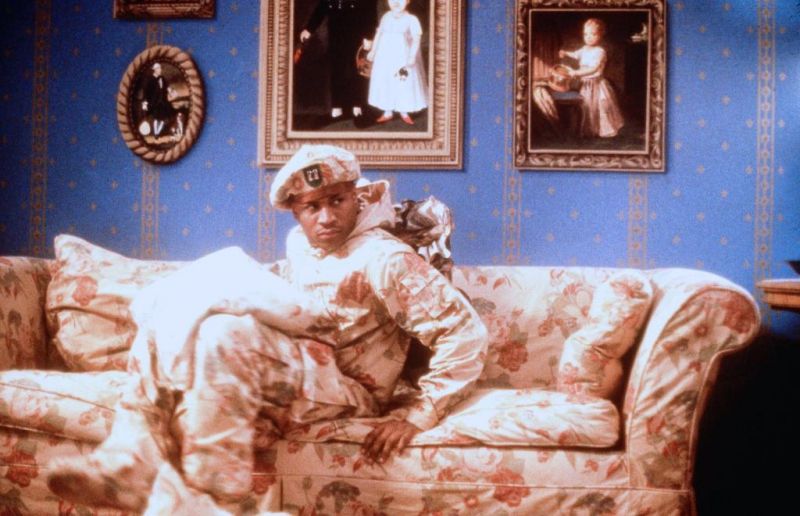 For FW17, designer Alex Mullins is feeling nostalgic. As London begins to feel the chill, the NewGen recipient has been capturing that feeling of wintery weekends spent hibernating at home for his new collection. Drawing inspiration from childhood memories eating cake at his grandma’s house and watching videos.

Continuing to explore storytelling through apparel, the designer will also revisit a character from his very first collection. A culmination of cultural references and time periods, that inaugural FW14 narrative followed a cowboy from the Wild West, who somehow winds up working as an artist in London during the 1970s. Curious to find out how this character has developed, we spoke to Mullins during his preparations for London Fashion Week Men’s. 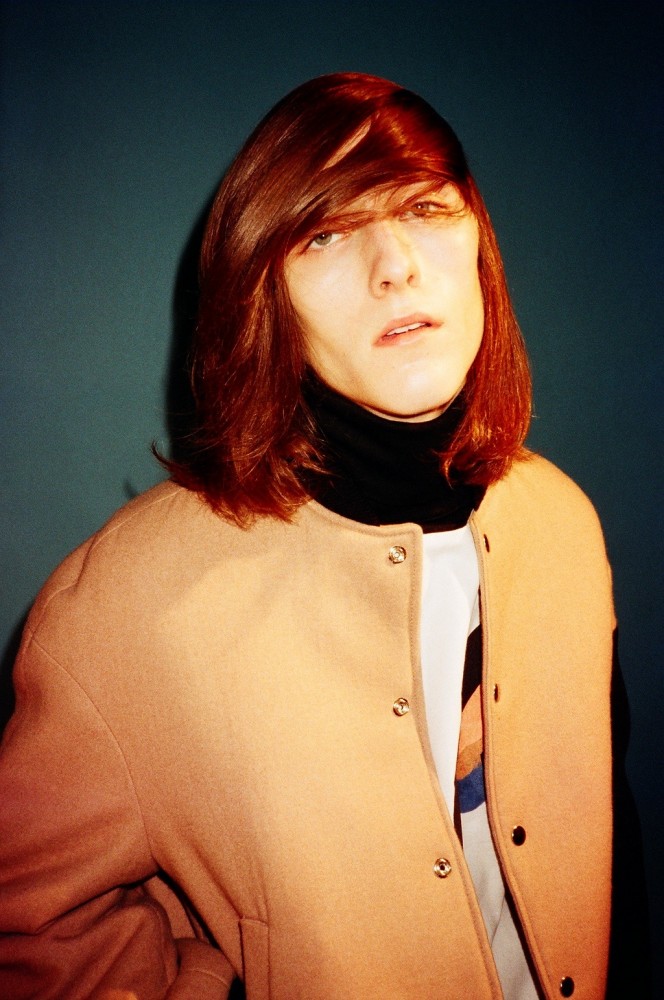 Nazanin Shahnavaz: Can you run us through the initial trails of thought while designing your FW17 collection?
Alex Mullins: For FW17 I wanted to capture a feeling of Sundays and reflection, this idea that winter Sundays can make you want to disappear in to your surroundings, feel camouflaged and safe. Also, a sense of familiarity is always key to my work, but not in a retro way, more in terms of nostalgia and memory. So, I’ve been thinking a lot about early 90s VHS video graphics and afternoon twilight, a kind of seasonal limbo. Additionally, I have always been heavily interested in folk and outsider art. The idea of creating with no other purpose than to create! It’s a very liberating concept in itself.

Nazanin: Is there an experience or moment that you can pull out as having heavily impacted the direction of this collection?
Alex: When I was a kid, Sundays were spent watching old videos, or being bored out of my mind imaginatively escaping on adventures inside the TV. Arguing with my sister about absolutely nothing, going on walks with my dad’s friend’s dog, following my mum around a suburban shopping centre. Eating loads of cake at my gran’s house (the heating was so high you were almost sick). I wouldn’t say that this collection is about me as a child, but perhaps the way that I am reflecting about the past, and the library of images it conjures up in my head.

“I have always been heavily interested in folk and outsider art. The idea of creating with no other purpose than to create! It’s a very liberating concept in itself.” 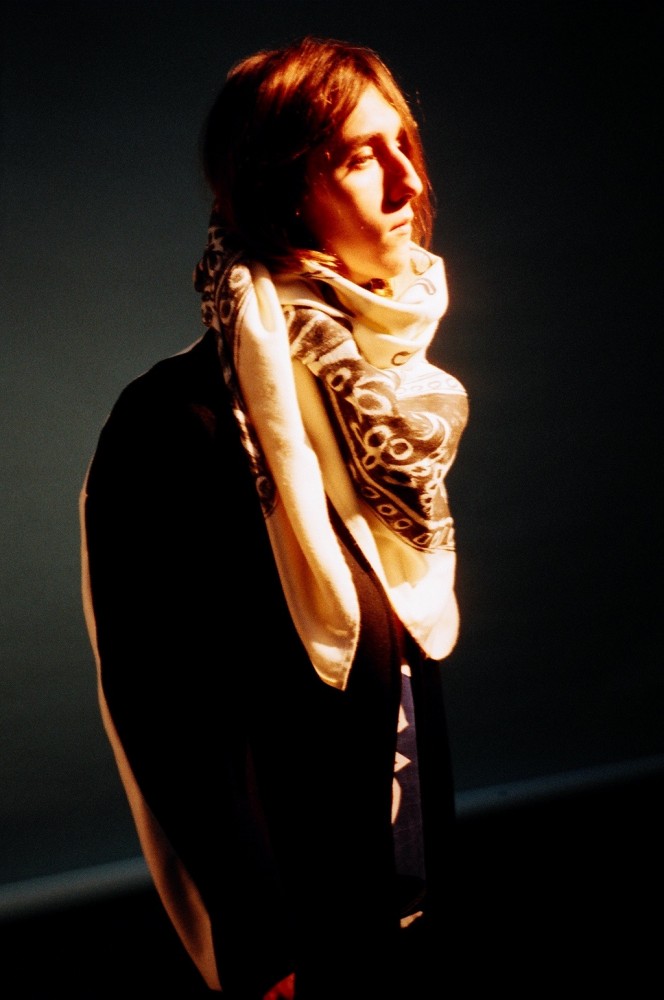 Photographs by Alex Mullins, shot during the making of his FW14 lookbook.

Nazanin: Detailed narratives and imaginary characters often inspire your work, who have you conjured up this season?
Alex: I’m touching base with a character I created as the inspiration for my first season (FW14). I want to reconnect with him and see what stage he is at a few years later. This quote is taken from the original press release, which now feels like a polite version of the character – in my memory he locked himself away in a bedsit and went a bit mad.

“In this 32-piece collection Mullins creates a graphic world that draws upon the masculinity of the Wild West Rodeo; hardwearing, practical work wear clothing is reinvented, by treating them as a wearable canvas. Large-scale paintings are spliced and reworked to create unique abstract printed pieces.

Mullins transforms functional clothing with the fluidity of curious characters that peer from the garments, toying with proportion and portraying his vision of the Wild West. What would a modern day cowboy wear if he were in London? How would he adapt? The narrative for this season began with this character being transported to London in 1974, and understanding his relationship with the city, as he makes ends meet as a struggling outsider artist.” 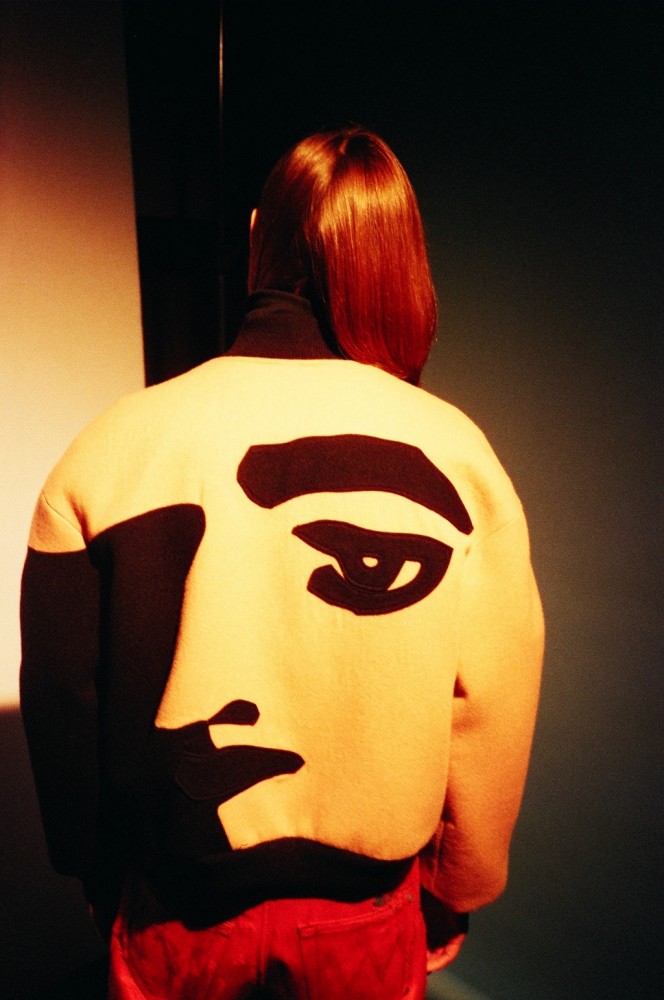 Photographs by Alex Mullins, shot during the making of his FW14 lookbook.

“I’m touching base with a character I created as the inspiration for my first season (FW14). I want to reconnect with him and see what stage he is at a few years later.”

Nazanin: You recently collaborated with Amy Petra on an art installation; do you have any other art works in the pipeline?
Alex: Working with Amy for our show at Christie’s was amazing. It really allowed me to open up to a side of my creative process that has always been there, but it was the first time I had actively worked on a project in that way. I do indeed have plans and ideas for more projects like this, I always consider what I do as quite interdisciplinary so this kind of experiment feels very natural right now.

Nazanin: You often take quite an artistic approach to your textile work, you hand draw and paint all your illustrations, how has this evolved for FW17?
Alex: I’m building upon my contemporary wardrobe aesthetic with heavily deconstructed silhouettes and I am revisiting my more crafty side via screen-printing and embellishment work. I’m experimenting with multi layer, colour separation screen-prints and I’m playing with familiar illustration motifs, which will swirl around the clothes.