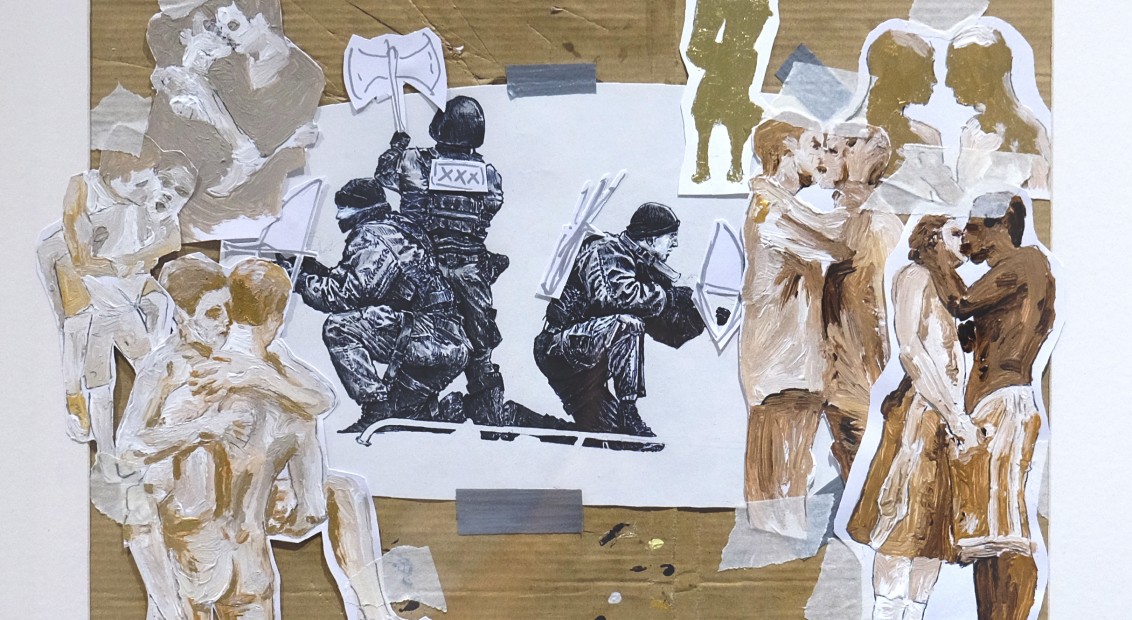 Last December, Italian artist Giovanni Leonardo Bassan presented his debut exhibition. Titled Martyrdom, the series borrowed from classical art tropes whilst exploring the idea of contemporary martyrs, those who are persecuted for advocating a belief.

Since then, Bassan has been on the move (working for Rick Owens and with Michele Lamy as his mentor, there’s scarcely time to stand still). During a recent two month spell in New York, he immersed himself in the vast metropolis. Sensitive to his surroundings, the artist soon found romanticism in the speed, diversity and spontaneity of the city and New York became his muse for a new project titled Everything Distracts Me (a quote from Patti Smith’s Just Kids).

Working between hotel rooms, lounges and friend’s apartments, Bassan sketched on loose pieces of paper, notebooks and work documents, creating temporal collages that merge mediums with organic momentum. Here we speak to Bassan after the opening of his new exhibition at Paris’ Eclectic Studio. 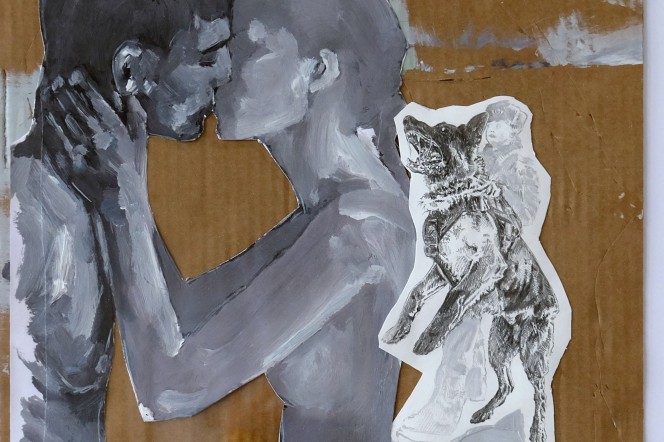 Alex James Taylor: Having shown your debut exhibition in Dubai, you’re now back in Paris – where you are based – for your second show. Does it feel nice to be showing in Paris?
Giovanni Leonardo Bassan: Yes I’m very happy to show in the city I live. In fact it’s my second show here (but the first solo). Paris is the universe where all this starts for me: my first basement studio, the first exhibition, first real job… It’s a constant inspiration between my friends and things happening around us.

AJT: You’ve just got back from NYC, and your time there feeds directly into this series. What is it about the city that influenced these works?
GLB: When I work on some new piece, especially when I’m thinking about a new show, I get very sensitive about my surroundings and the people within. I start to analyse the city I live in on a deeper level, admiring the bond and the power that it releases and documenting this reality.

The show starts with a small photo I took when I was entering in the city and closes with a photo I took when I was leaving (literally on the plane), with these I wanted the audience to join my journey in this metropolis. It isn’t about NYC for itself, but for a place that in the past two months gave me so much, the trembling  energy, the incredible people I met, the freedom, and the different layers that are inherent in the structure of the city; being both muse and maker.

AJT: And how does this translate into your artwork on display here?
GLB: The curator informed me about the possibility of the show whilst I was already in NYC,  so I had to start immediately there, I worked between hotel rooms, lounges and my boyfriend’s apartment, sketching on loose pieces of paper, notebooks and work documents.

I was forced by the situation to start small formats, which was a new challenge for me as usually when I work I set myself time and work in my studio taking up as much space as possible. Inspired by graffiti and different visual forms that I discovered around the city I started to play and assembled collages of my drawings, in fact you can find a few of these sketches enlarged and pasted on the walls in the Big Apple.

“As Patti Smith said, “I don’t fuck much with the past but I fuck plenty with the future.”” 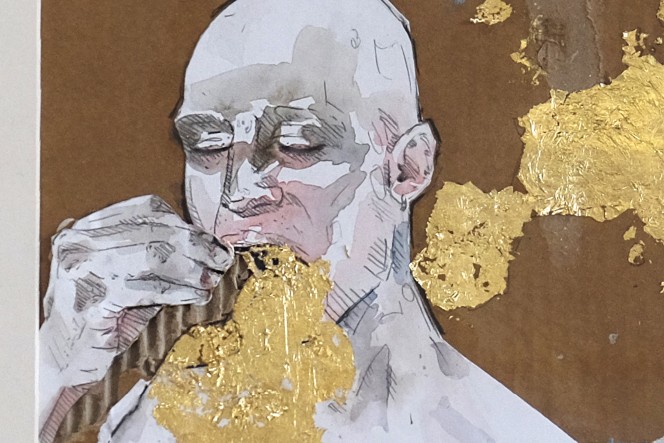 AJT: Your previous exhibition featured work that elevated the suppressed and underrepresented to martyrdom via classical tropes. This series seems to focus on the everyday, those people you pass by on the NYC streets and those who make the city as vibrant and diverse as it is today. The exhibition is called ‘Everything Distracts Me’, is that in reference to a romanticism surrounding these strangers you have captured?
GLB: The title is a quote of Patti Smith from Just kids, “Everything distracted me, but most of all myself.”  Twisting it in the present as these are just a documentation of facts and events that happen in this specific time frames, it’s about looking at the present and trying to transfer it all to paper. By improvising I learned that, usually, contradictions are the clearest way to speak and getting distracted by so many stimulations, and mostly by myself, I try to be here.

AJT: In terms of your exhibition set-up, how did you want to display the images? What was the thought-process behind the arrangements.
GLB: The initial idea was to put together an intimate selection of small formats of work. I wanted to create pieces that people can take with them into their private spaces, relate to them and gain something from them. So simply there are eleven pieces (nine drawings and two photos) framed by myself. 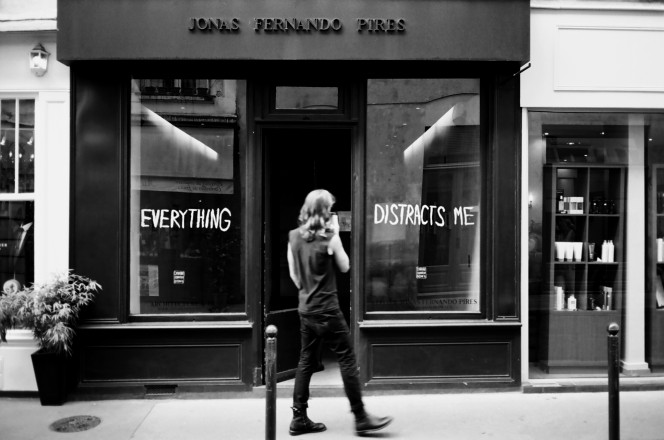 Giovanni Leonardo Bassan: Everything Distracts Me (2016)

AJT: Your artwork tends to hold a mirror up to contemporary society, articulating your own feelings towards societal issues. With the recent rise of Donald Trump’s dangerous political views in the US, what was the overall feeling and atmosphere like in New York at the time? I imagine there is an odd, disillusioned atmosphere there right now, similarly to here in London post-Brexit.
GLB: Quite honestly I’m so surprised at the current state we’re in,  we studied history at school in order to learn from the past and not recreate the same mistakes, but what about if we are seeing that we are taking the wrong foot steps of the past? What if we realise that contemporary society is taking a bad path? Surely it’s up to us to try to do something, every action is important, and everyone has a duty to voice their opinion and try to change things.

AJT: The series is a call to live in the moment. Would you say that this is something you are trying to do more lately??
GLB: Definitely yes, as Patti Smith said, “I don’t fuck much with the past but I fuck plenty with the future.” 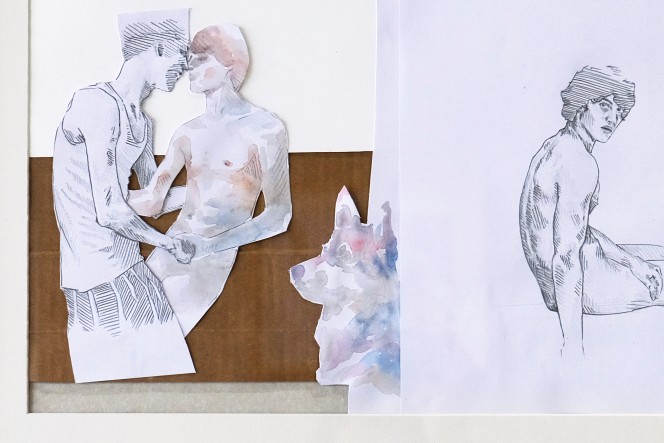 Everything Distracts Me runs until 10th July at Eclectic Studio, Paris 75007