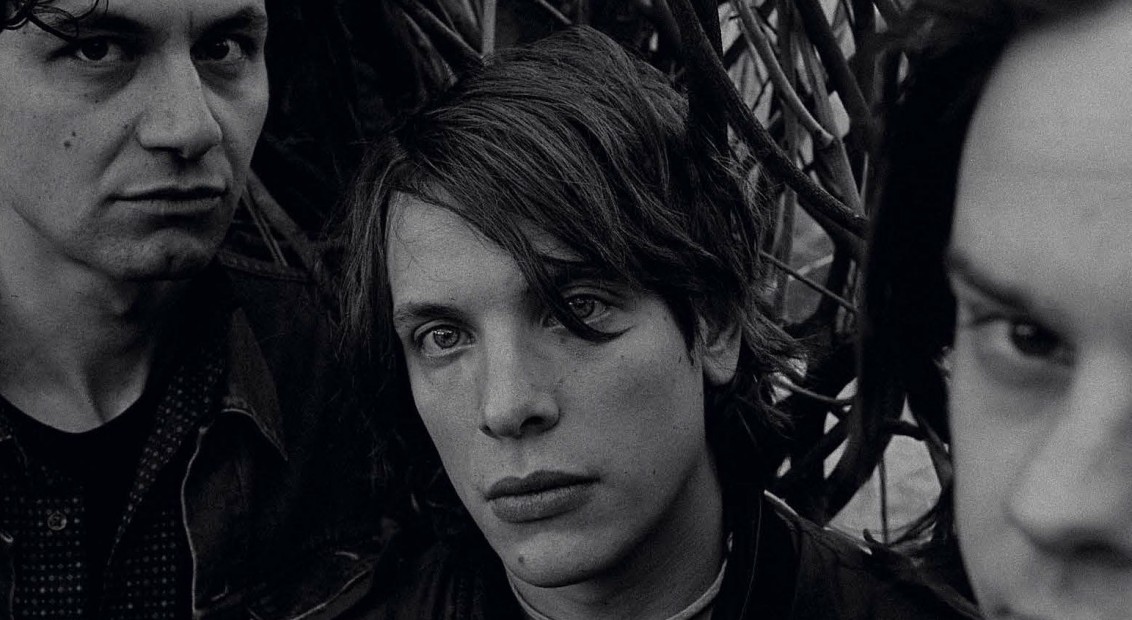 You hear YAK before you see them. The London trio have quickly garnered a reputation for their high-velocity, no-compromise live performances – that frantic holy matrimony of bludgeoned, off-kilter chords, rampant drums and malice-soaked lyrics. Today marks the release of their debut record, Alas Salvation, a thirteen-track groove that beguiles and ruptures in equal measure. Here, we publish our HERO 15 interview with frontman Oli Burslem, a poster-boy of bug-eyed terror and one of the most enthralling live performers on the circuit…

To witness YAK live is to provoke a feral beast. Framed in the strobe, the trio’s snarls ooze genuine malevolence as Oli Burslem turns the stage into a sparring ring, lunging with reckless abandon.

Having first moved to London via Wolverhampton at the age of seventeen, Burslem made his way selling curiosities on the market. Attracting clientele that read like an ATP Festival line-up – the likes of Thurston Moore, Jason Pierce and Bill Drummond, no less – musical encouragement came from the highest order. Once Burslem recruited childhood friend Andy Jones on bass and the New Zealand-born Elliot Rawson on drums YAK soon took shape and the music took hold.

Responsible for leaving the London gig circuit viscous, this trio have carved a notoriety for arresting performances – palpable energy, palpable bruises. Now, having realised their debut full-length record, Alas Salvation, that same vivacity is set to wax and baptised by, friend and collaborator, Nick Waplington’s visceral artwork. From album opener, Victorious, the band’s anthem for the disillusioned, Tory-shafted generation, to album finale, Please Don’t Wait for Me, a spindly descent that drops you to your knees (it’s not a closer, it’s a brain shattering comedown), YAK play by their own rules. To quote John Peel’s iconic description of The Fall, “Always the same, always different.”

Alex James Taylor: Your debut album, Alas Salvation, comes out in May, did you ever expect YAK to get this far?
Oli Burslem: No not really, I think towards the middle of last year it became a bit more apparent that we would probably do an album, which really is a dream, it’s all I’ve ever wanted to do. So I feel quite privileged but at the same time there’s a huge responsibility to make it good. I’ve been complaining so much over the years about how the majority of music is shit, so I couldn’t fall into that trap. Have you heard the album?

Alex: Yeah, I think it’s a real game changer. I actually saw you live before hearing any of your recordings and I was blown away, it was the most thrilling thing I’ve seen on stage for a while. So I was a bit apprehensive about how that would translate to recording, but you’ve really managed to bottle that energy.
Oli: Oh, thank you. It took a little while because it was all very fresh to us, we’d never done interviews or videos or recordings, it was all new and there’s nobody holding our hands, so we’re just doing it our own way and trying to do the right thing. But I think the album came out really well and it’s a fair representation of the band, we aren’t trying to con anyone, it’s just our sound, raw and laid down. Around Christmas time I thought I wasn’t going to be happy with it but it turned out just as I wanted it and I’m looking forward to it coming out.

Alex: Seeing you live it seems like you have an infinite collection of songs, there’re always new ones thrown in the mix.
Oli: Yeah there’re a lot of songs that didn’t make the cut on the album. The last song, Please Don’t Wait for Me, I wrote four years ago, back then I wasn’t thinking about being in a band or making an album, I’ve just always written music, I guess. On the first day we recorded about five songs, and we did six days altogether, so there was a lot of stuff that was recorded but didn’t make it on the album, we were trying lots of different things and experimenting a lot. The aim was to make something that sounded really raw and exciting. 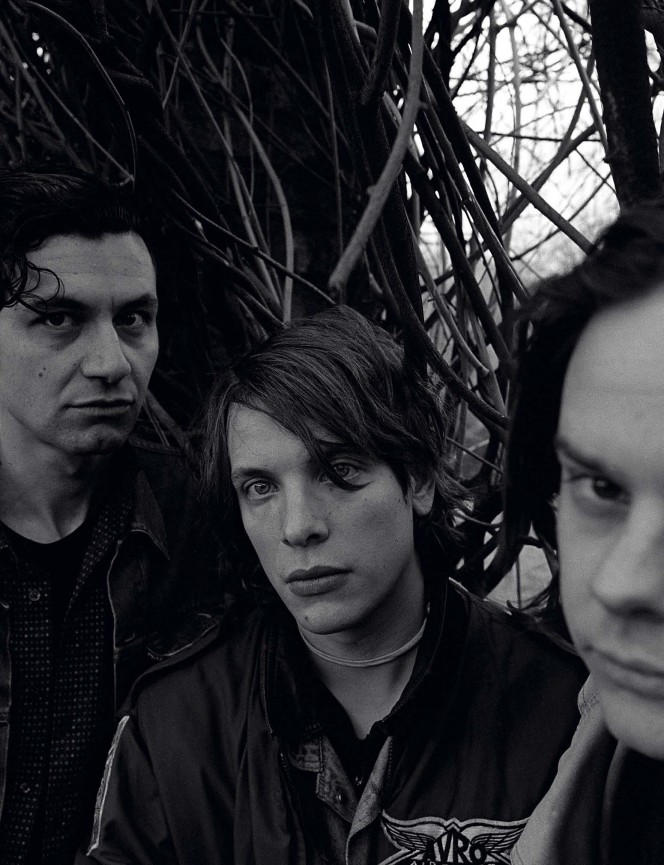 Alex: Yeah, I was going to ask you about the equipment you used, I know you’re very much into analogue…
Oli: Well the only equipment I own is one white guitar that was given to me and I’ve always owned it because it’s too fucked to sell, everything else got sold because I had no money. The mellotron we used on the album was actually the same one Black Sabbath used in the seventies, which is now owned by Pulp’s Steve Mackay. There’s lots of white noise and hidden synths in the mix too. The track Victorious has got loads of frequencies, I wanted it to be incredibly loud with tons of white noise.

Alex: I love that track, with all the feedback and white noise it reminds me of that Magik Markers or Pussy Galore sound. It’s a bit like that album by The Boo Radleys where you can hear the amp slowly dying in the background throughout.
Oli: Absolutely. With Victorious I had a really strong idea of what I wanted it to sound like. I wanted just guitar to start, with the bass just creating feedback until the chorus kicked in. Then as soon as the chorus started it would be so loud that you’d have four more guitars, two basses and like three synths, and because symbols eat guitars I wanted the drumbeat to just be on the toms so it felt even heavier. I’m not a big fan of the Tories really, to put it mildly, so I wanted something that would be like an alternative national anthem, like Rule Britannia, those lyrics are really heavy, “We’ll never be slaves,” and all that shit. It’s horrible words. So I wanted to make our own version.

Alex: Going back to your live set, it’s heavily based on improvisation, is that something which has always been fundamental to the band?
Oli: I’ve been thinking about this recently actually because when we performed on French TV we had to have a set list, which is a bit tricky for us. I was finding it really hard. I struggle to do the same thing twice – in the studio I can’t play the same thing twice, in the morning I never make my eggs the same twice. I find it boring, I guess, not even just music, anything, maybe sexual intercourse too. So maybe that’s why we have this improvisation aspect to our music, sometimes for better, sometimes for worse, but it certainly promotes an energy when we play. We’re just winging this whole thing, should we even be a band? I think that gives it an intensity.

Alex: There’s a real sense of danger in that too, playing on the edge. Which bands or musicians influenced you in terms of their live performance?
Oli: Sometimes you’re influenced by things which you find bad. I’ve seen a lot of band sets that just feel so safe, and I’ve always wanted to break away from that. In life there tends to be a monotonous formula: you wake up in the morning; you get the same bus; you go to your job; you leave; walk down the same streets. But I always have the mentality that when you go to a gig there should be something loose about it. There’s a lot of formulaic aspects to it – you queue up, get your ticket, buy a drink and so on – but when the band play there should be no limits, anything can happen and that’s how I want YAK to be – without formula. A lot of bands you see play very safe and just recreate their album perfectly, we could do that but there’s no point, just listen to the record if you want that.

Alex: I totally agree. I think East Coast acts are often built in that mould, seeking to break the norm. That whole scene with the likes of Pussy Galore, Suicide, Sonic Youth and Royal Trux. It really shifted focus and birthed a new aesthetic.
Oli: Absolutely! Royal Trux are getting back together aren’t they?

Alex: Yeah, they’ve done a few gigs in the US. I’d love to see them playing together live.
Oli: Same, we supported her [Jennifer Herrema] band Black Bananas last year, she was cool and really on it. I recently watched a film called Be Here to Love Me about Townes Van Zandt, he was a folky singer from Tennessee, and a full smackhead. He was from a really wealthy Texan family but lived this weird kind of troubadour lifestyle and he’s got this song called Heartworn Highways, it’s just three chords all the way through and it’s so touching, I was nearly in tears listening to it. That’s why music is so amazing.

Alex: A lot of your songs consist of just two or three chords, is that simplicity fundamental to you?
Oli: I just appreciate a lot of these bands who create complexity through simplicity, like Suicide, The Stooges, The Jesus and Mary Chain, I think it’s often more powerful. But then intricate improvisation pieces excite me a lot too, like experimental jazz, people like Evan Parker – who I’ve met a few times and is incredible. Improvisation music gets me going because a lot of it is challenging or noisy, but when it does fit and you’re there playing and you break out of the formula of playing blues riffs, it’s amazing. I always used to play bluesy music in the Midlands and you just get stuck in a rut and it doesn’t challenge things. This sounds really up my own arse and arty, but with the improvisation stuff it should be like, if I had a conversation with someone in the pub and both of us were being honest, you can usually read each other’s insecurities, you can kind of gauge someone’s inner thoughts, even when they aren’t explicitly telling you. But then if they went home and edited the conversation and gave you it how they wanted you to hear it then you actually end up learning nothing about the person. That’s how I see improvisation music, even if it doesn’t sound great at least you can see where my flaws are, and that’s kind of comforting in itself. But like I said, that’s probably all a load of bollocks.

Yak: Alas Salvation is out today via Octopus Electrical