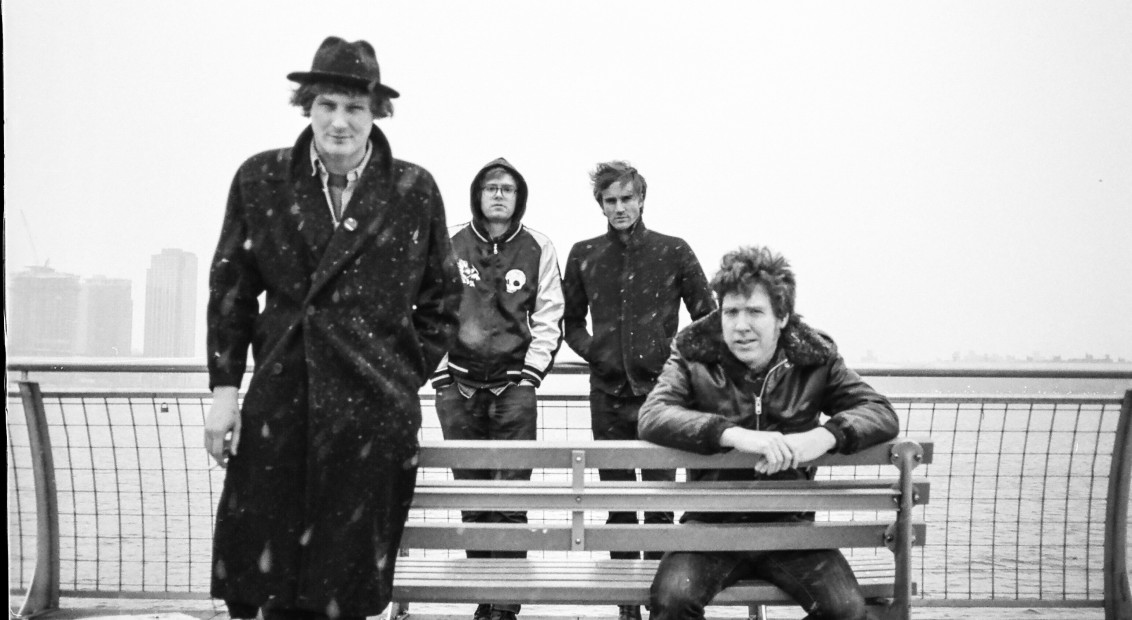 Savants frontman Tony Prins, opens with, “What a week for music.” He’s right. Bowie, our king, passed and we exploded in a saturnalia of celebration and thanks. Music was everywhere, and we were reminded of its cardinal importance. This Brooklyn four piece see it as their responsibility to ride the wave of our geniuses, keeping their spirit alive and kicking. And they’re succeeding with aplomb, wit, and grace. Those Ray Manzarek keyboards and Lou Reed droll; thanking the greats by giving them great in return. It’s all about coming together with others to jam, indulge, collaborate, cavort and create.

Having released a debut eponymous record last October – a hot slice of Nuggets-era psych influenced death, rattle and roll that’ll leave your toes tapping and your heads spinning – Savants aren’t stopping to admire their work, they’re hotfooting it back to the studio and on then to the road, ripping up venues across the US. Be sure to catch them before they’re onto something new.

Lola Young: So your sound is super unique, I read that you guys hardly use any digital elements in your music.
Tony Prins: That’s what we strive for.
Joe kimono: Although it’s a combination of analogue and digital, the best of both. It would be foolish to say we’re completely analogue when we’re using Instagram and other social media outlets, but we have a lot of great analogue recording gear.

LY: And you’ve released cassettes!
JK: Yeah, we recorded our song Something by making a tape loop, actually cutting the tape and sticking it together. It’s fun to make stuff with your hands, it’s a different area of creativity, a different medium.

LY: So what are you up to right now?
TP: We’re getting ready for our show at Rough Trade later this week. We got to book the support bands ourselves and they’re all great.

LY: There are so many great Brooklyn bands at the moment, all connected too. Would you say the community is growing?
TP: Yeah, we go to shows as much as possible. Joey and I both work at Good Room booking bands and recording them live. Then they come to us and we just end up doing shows together.

LY: There’s definitely an energy in Brooklyn of guys getting together, making music and having fun.
Charlie Porter: It’s great to see.
TP: There was a lack of that two years ago as DIY venues were closing up, but people wanted to build something again.

LY: There are shows every day in warehouses just around the corner.
CP: It’s definitely going through a transformation.

LY: In a lot of write ups of your music people are talking about your influences: The Doors, Lou Reed etc. But I still think it still sounds fresh, what’s your relationship with that referencing and reinventing process?
TP: We’re not afraid to reference. Instead of sticking to one sound we have a wild card strategy of trying to do different genres for every song and seeing if we can put it together to create a new type of music, combining everything we love.
CP: The last album was a compilation of the best of two years of recording spurts and turning it into a cohesive record. We’re huge fans of albums, that whole process of figuring out the track listing and creating a physical object.
TP: That was the main concept behind it all.

LY: And what do your lyrics tend to focus on?
TP: It’s as autobiographical as we can make it. It could be about playing in a band in Brooklyn…it could also be an abstract outlook about being in a band in Brooklyn, Shake Pendulum Shake was actually from a dream I had about this strange reptilian man going into cocktail lounges on the Bowery, a real seedy character. But then there’s a song on the album just about Williamsburg.
JK: Hounds of the Bourgeoisie.
CP: Modern day Williamsburg, the juxtaposition of young scruffy kids playing in bands and parents with strollers.

LY: Is that cynical commentary I sense in your tone of voice?
TP: It’s inevitable, it’s New York, it changes so quick.
JK: You cant be sentimental if you live in a city.

LY: I think you can still really feel its history.
CP: We’re fans of that. Obviously the musical history is something we take a lot of influence from.

LY: You can tell through your sound, your music has a solid New York identity.
TP: Yeah, the three of us definitely moved to New York because of the music that was made here, we wanted to be part of it. It’s so cool to play in the same places those bands played in, to be in a rock band in the same lifetime as David Bowie! That’s amazing.

LY: So what’s next for you guys?
CP: We definitely want to tour Europe this year.
TP: It’s going to be a similar writing process. Come up with a song that has a good character, record it, then come up with something totally different the next day, it’ll be even more eclectic, we’re not pigeon holing ourselves to anything.
JK: Our recording game and song writing game is getting better and better. At first it was simple, now we really take time to add lots of elements. It’ll be more intricate.
TP: More to get our teeth into, more meat on the bone.

LY: So when you get together is it more structured daytime or messy nighttime?
CP: Honestly, the latter.
JK: Something inevitably comes out of weird nighttime recordings.
TP: The later you go the better it gets, the sleep deprivation enhances creativity.
JK: New York can be very demanding so the band happens in-between and after what we’re doing, so it often has to be unusual hours in order to get it done…and some insanity comes out.

LY: New York is Nighttime.
TP: Never sleeps. A lot of the time we’ll go out to a show to see some good bands and wind up inviting them back to our practice space, fifteen people jamming until eight in the morning.
JK: After our show at Palisades we threw an after party, set up a bunch of mics and everyone was playing shit, even some girl playing clarinet. We recorded it and put it on the album, drifting in and out of chaos, that 30 second snippet of magic.